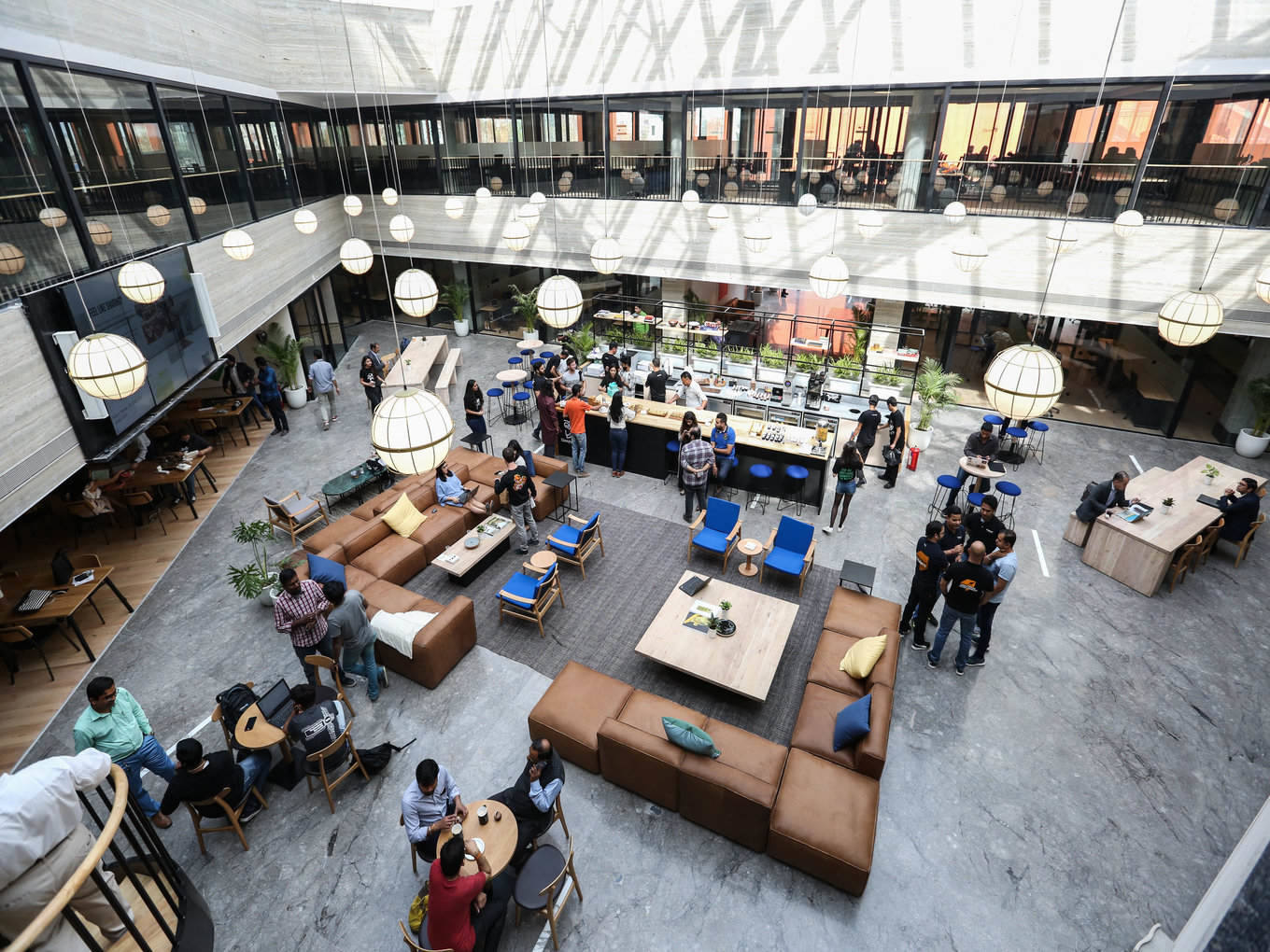 India had over 720 coworking centres as of last year, according to DataLabs By Inc42

Coworking spaces have changed the traditional way of working. With beanbags, cafes and libraries, the shared spaces are jazzed up to attract millennials and match up with the startup culture.

Along with offering flexibility of location and timing and a fun atmosphere to employees, these spaces allow enterprises to lock in costs for future projects and enjoy the flexibility of occupancy in tenure and scale. In India, the industry is gaining strong foothold at a fast pace.

The Size Of Coworking Industry In India

According to The State of the Startup Ecosystem Report by Inc42, which tracked the developments in the ecosystem last year, India had over 300 coworking spaces with over 720 centres and a total area of 15 Mn sq ft. After being adopted in Tier 1 cities, the trend is now spreading its wings to Tier 2 and Tier 3 cities as well.

Besides the likes of WeWork,  Innov8 backed by OYO Workspaces, 91springboard and Awfis, other notable players in the Indian market include GoWork, BHIVE Workspace, Cowrks, VorqSpace, Base Station, SproutBox, myHQ, AltF CoWorking, GoHive, Yessworks, Ideashacks and others. With so many players, the competition has skyrocketed over the years. 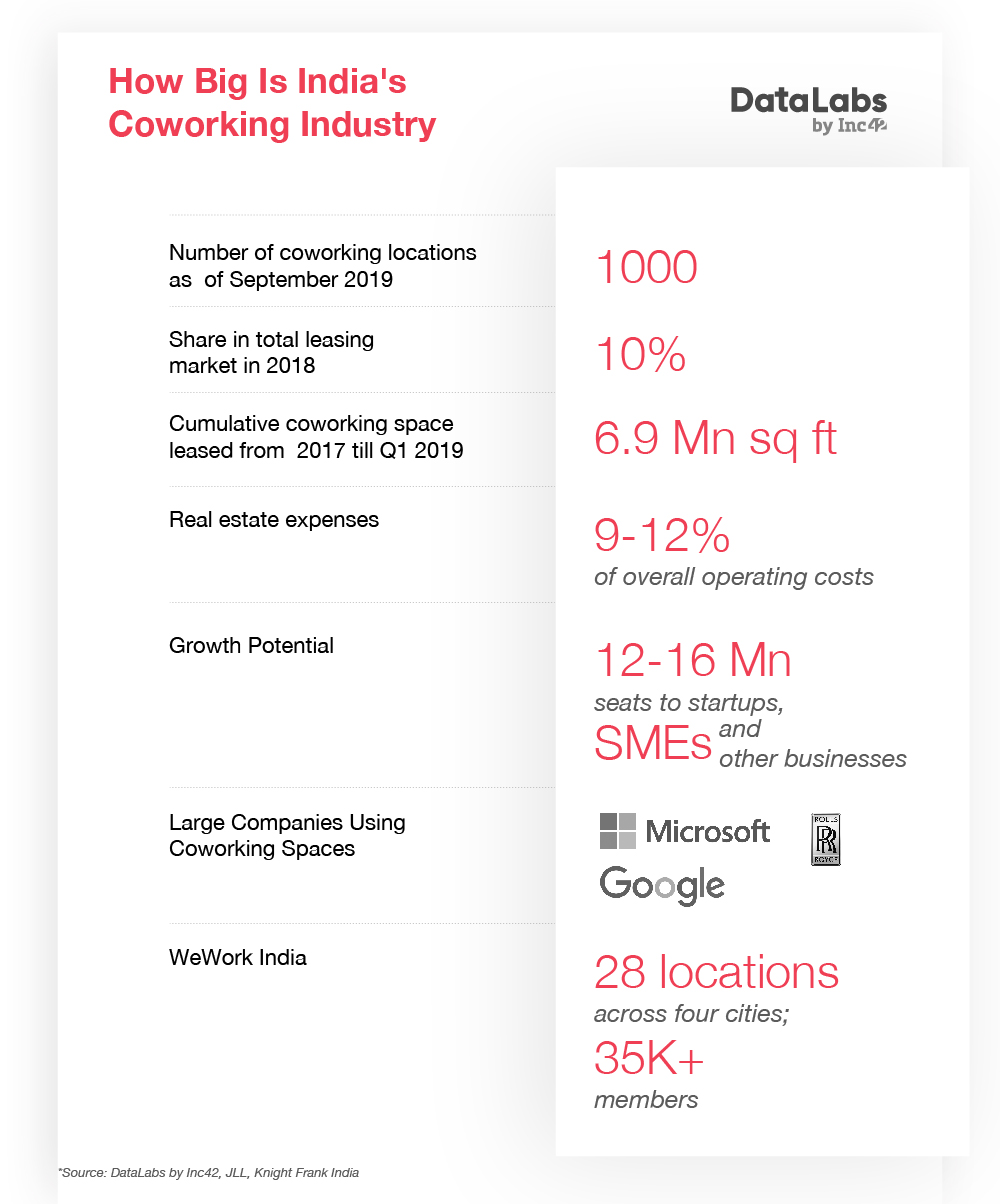 According to JLL’s ‘Co-Working Reshaping Indian Workplaces’ report, the cumulative coworking space leased from 2017 till Q1 2019 has reached 6.9 Mn sq ft. Further, it said that the coworking share in office leasing among the top seven Tier 1 cities of India has gone up from 5% in 2017, to 8% in 2018 and 12% by Q1 2019. This indicates the growing size of the Indian coworking industry.

So what are the key highlights of the Indian coworking ecosystem from the point of view of growth and market size?

More than 1.18 Mn people work in around 35,000 coworking spaces globally. According to reports, India alone had approximately 1000 coworking locations as of September 2019. Currently, India is also the second largest market for the coworking industry after China.

“The share of coworking spaces in the total office leasing sector increased from 5% to 12% in 2019 and I believe this trend will have an upward trajectory,” Sanjay Choudhary, CEO and founder, Incuspaze said.

After being adopted in tier 1 cities, the trend of coworking spaces is now spreading to tier 2 and tier 3 cities as well.

“Statistically, Delhi NCR, Mumbai and Bengaluru have the most coworking spaces; owing to the growing number of startups and advancements,” Mishu Ahluwalia, founder and CEO, GoHive, said.

“Hyderabad, Chennai and Pune follow close with a changing culture of early adopters looking to innovate with flexible spaces. With the increase in leasing in coworking spaces over the last quarter, the model is an asset for many developers and investors,” Ahluwalia added.

Coworking spaces in the country sprawl over an approximate area of 6.9 Mn sq feet. As per Colliers International report, flexible work space operators crossed 7 Mn sq feet of leasing during 2018 which accounts for 14% of the entire leased commercial space during the year. According to myHQ, the Indian market has the potential to offer 12-16 Mn seats in coworking spaces to startups, SMEs and other businesses.

“The still recovering real-estate market and changing nature of work has created a virtuous circle for coworking and I think shared spaces can become at least 15%-20% of the total office market, Ashish Goenka, director, Redbrick Offices, said.

Besides startups, bigger enterprises are also realising the value of coworking. MNCs and established businesses are also tilting towards coworking spaces because of multiple reasons. A major contributor to this inclination is the access to expertly managed office spaces that enables large enterprises to save money, along with giving them the flexibility of working in terms of location and time.

“Having a well-managed office space indirectly contributes to the growth of the overall organisation, as this allows the senior management to focus on the core activities of the business without the hassle of overlooking the day to day operations of running the office space,” said Choudhary. Large enterprises are one of the fastest-growing categories at WeWork India constituting 52% of the member base.

Since coworking spaces thrive on the concept of flexibility, they offer the same to their employees.

“We try to keep a positive impact on employee productivity as we foster a workplace setting defined by trust and empowerment,” Karan Virwani, CWeO, WeWork India told Inc42.

Most of these places thrive on providing unparalleled services and amenities it offers its members. They enable collaboration, engagement and networking between members with new ideas. Many coworking spaces experiment with new features to stay relevant. For instance, Chennai-based Wsquare is a women-only coworking space. Additionally, the management also organises a marketplace once a month to motivate women entrepreneurs to showcase their products or ideas.

The team works towards managing multiple aspects of the workspace for the enterprises, which enables them to put greater focus on other business matters. Speaking to Inc42, Vorq Space founder Akshit Mehta said, “Coworking spaces are becoming more affordable and flexible for startups and are providing the perfect environment for them to flourish. With the multitude of services and community-driven ecosystem at affordable pricing and such flexibility, coworking spaces have given the serviced industry a whole new approach.”

Coworking space providers are expecting to lease around 18% of the total workspace in India by 2020. There are numerous providers — including international startups — and most of them focus on startups as the primary audience. SMEs and large enterprises are also following suit, allowing for flexibility and efficient time management for their teams.

Coworking spaces seem to be a promising sector for budding entrepreneurs. Not only are global players like WeWork in great demand today, but other smaller international players are also making their way to the Indian market to tap into the great demand.

With coworking places going from strength to strength, it’s only a matter of time before this becomes one of the biggest sectors of the Indian startup ecosystem, especially as more and more startups come to the market.

An earlier version of this story erroneously called OYO Workspaces and Innov8 as separate entities. We made the correction and changed it to Innov8 backed by OYO Workspaces.