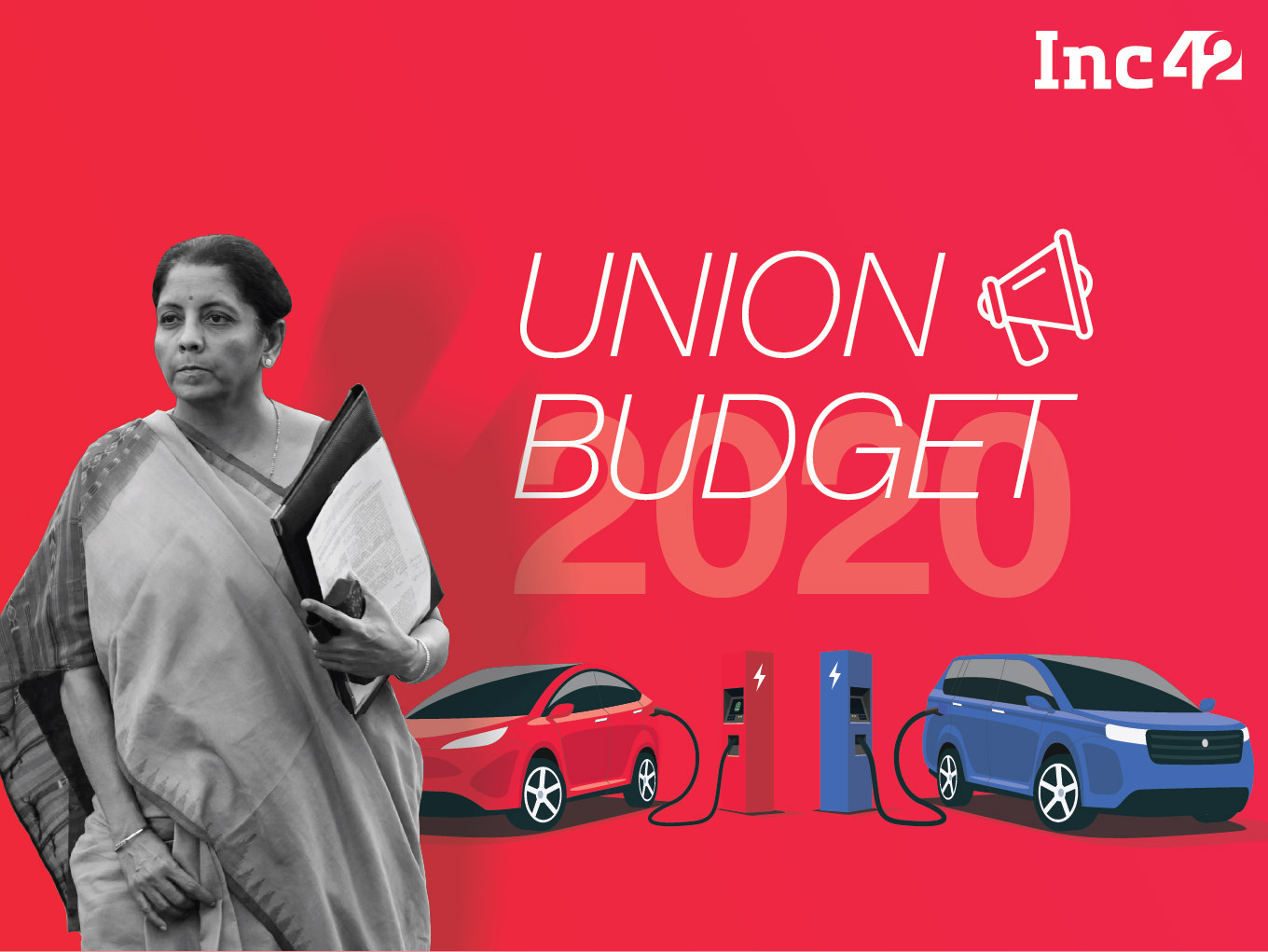 From GST on Li-ion batteries to debt financing and an EV Innovation Fund - Here's what electric vehicle industry stakeholders expect to see in the Union Budget 2020 in February.

With a slew of initiatives be it the launch of Phase 2 of FAME scheme, the country-wide prohibition of single-use plastics, or India’s announcement of increasing the renewables from 175 GW to 450 GW at the recent UN Climate Action Summit, India has undoubtedly listed the going green among its priority tasks. Its commitment to adopting electric vehicles will be on display during the Union Budget 2020 as the EV industry awaits policy decisions that will impact the future of mobility in India.

In fact, during the Union Budget 2019 in July, finance minister Nirmala Sitharaman announced lowering the GST on EVs from 12% to 5%, which already had a big impact on the industry. She had stated,

“Government has already moved GST council to lower the GST rate on electric vehicles from 12% to 5%. Also to make EVs affordable to consumers, our government will provide additional income tax deduction of INR 1.5 lakh on the interest paid on loans taken to purchase electric vehicles.”

In conjugation with the Phase 2 of FAME scheme, Sitharaman had also announced another scheme which aimed to set up mega-manufacturing plants in sunrise and advanced technology areas such as semiconductor fabrication,  solar photovoltaic cells, lithium-ion storage batteries etc. Under the scheme, the manufacturers will also be liable to receive tax exemptions.

However, in an independent evaluation report, it was observed that while the relatively increased awareness, is in itself a notable achievement, the overall outcomes of key parameters of fuel-saving and CO2 reduction are significantly below the target for FAME and that it did not help encourage manufacturers to produce EVs.

Applauding the government’s effort, Amit Gupta cofounder and CEO of Yulu which currently claims to operate 4000 EVs across various cities including Bengaluru, Mumbai and Pune, however, told Inc42,

“Instead of focusing on how many electric vehicles are being sold, the focus should really be on how many trips or how many kilometres out of every 100, are electric or ecofriendly. I think, that should be our objective. Such a narrative will be more incorporative as it will also recognise the efforts of EV fleet operators.”

As the Budget 2020 date nears, Inc42 spoke to a slew of EV startups and fleet operators to understand and present the existing loopholes in the schemes which finance minister Sitharaman must address in the upcoming Union Budget 2020.

Electric Vehicles In Budget 2020: Why GST Is Still An Issue?

Akhil Aryan, cofounder ION Energy told Inc42, “The government needs to do more to support the localization of battery technology that power electric vehicles. Lithium-Ion Batteries that form close to 40% of the cost of an electric vehicle attract GST of 18%. The government should consider reducing the GST rate and encouraging companies to set up battery manufacturing plants in the country through tax exemptions.”

“If the government could reduce the GST on Lithium batteries from 18% to 5% that would be a major reduction in cost. This will reduce the cost of electric bikes by almost 10%.”

Agreeing that GST on raw materials cost is a pain for various companies those who are importing it, Ankit Khatry, cofounder of Emflux Motors, one of India’s first electric superbike manufacturers, commented, “Luckily, we do not have to depend a lot on importing as we are developing all the technologies for e-drivetrain and other EV related products in-house.”

For startups it will be a great deal if the government does some kind of tie-ups for Li-ion cells companies, Electronics parts companies which can reduce down the cost and MOQ for the raw materials, added Khatry.

Yulu too has to pay 18% GST for its services. Gupta explained from the input credit perspective, the GST on EVs is 5% but on the output side, the consumers are actually taxed 18% GST.

“What it means that if a consumer is taking a ride on Yulu and pay INR 100 for a trip, out of that INR 100, we have to pay 18% GST. We want this to be reduced to 5% for the EV rides. With this, the GST will be on par with the input credit and ultimately this will benefit the consumers and help them prefer EV rides over ICE,” said Gupta.

Unlike the conventional automobile sector, financing has been a major concern for EV industry as Nationalised banks are currently not offering any financial help over electric vehicles.

Gupta propounded, “Today what’s happening if I want to buy EVs, I will have to pay either a lot of interest as it is being considered as personal loan or I will have to raise equity money and buy that. Both of them are not sustainable in the long run. For instance, If we consider buying 1 Mn electric bikes, we need to have over $500-600 Mn to buy the asset which is a significant amount of money for any company.”

“Right now, we are paying 1.5-2x interest rate on EVs in comparison to what we have to pay on ICE vehicles.”

Gemopai’s Kumar seconded, “We are suffering from lack of awareness and finance. The nationalised banks are not ready to finance us, even on the registered vehicles. That is a bigger challenge. I won’t mind if subsidies are removed and the government diverts them to the banking sector enabling them to finance us.”

He added that the significant amount of funds allocated to the EV under FAME should also be spent on customer education. Indian EV manufacturers don’t have enough money to spend separately on customer awareness.”


Explaining that EV is still an evolving sector, Aryan said that there’s a lack of the right engineering talent in the country in building an ecosystem for electric vehicle and battery manufacturing. Recently, IIT Hyderabad collaborated with Japanese company ItsEV on the development of lithium-ion batteries for electric vehicles. The government should encourage private players to invest in more such research and development projects with Tier I and II universities and campuses across the country, startup founders said. This will build local talent and reduce our reliance on other countries for the import of advanced electronics and battery technology.

For R&D, Emflux Motors is exploring opportunities with different national institutes in India. Khatry said, “We have attended quite a few events promoting their EV sector from different countries sponsored by the Government of their respective countries. We think if we also want to be dominant in the EV segment we should also start providing our essential tech/Design to different countries and government help in the same will help a lot of startups.”

Agreeing to the idea of having an innovation fund, Gupta said that the grant is essential for the EV entrepreneurs, institutions so that these could start developing some of the EV technologies in India.

“Companies would be interested in having their own R&D teams and manufacturing plants in India which will be a very big deal. This will not only bring value, but jobs as well. It will also help fleet operators like Yulu who currently has to manage very complicated supply chain.”

Commenced on April 1, 2019, Phase 2 of FAME promises a lot in terms of subsidies and setting up charging infrastructure.

However, it’s been nine months since then, while 8,143 electric vehicles have been sold under the scheme, only on 19 has the subsidy amount been claimed, according to the FAME’s webpage. It is worth noting here that the manufacturers pass on the subsidies to the consumers in advance.

Khatry argued, “The government is taking the initiative to improve the EV sector in India but it seems there is a very slow process for the retailer to get back their subsidy and cash flow for the EV retailer is very much important as it is a new segment and cash flow will motivate this sector.”

He added that EV charging points should be made mandatory in all the apartments and residential societies and should also be mandated for companies under CSR activity. “This will help in creating awareness about the EVs and also reduce the chicken and egg situation from the mindset of the people,” he added.