Sharma laid out the frameworks that the fintech major uses to create a product roadmap, enter new markets and even shut down products. He also announced a contest for paid internships in the company’s product function

There are many times when we wonder ‘What a great series, but if only the ending had done justice to the script…” We wanted to ensure that the audience didn’t have that nagging feeling when the curtains fell on The Makers Summit 2021 — the largest product conference the country has ever seen with 100+ speakers, 40+ sessions, 12,500+ registrations, 8,000+ attendees, and 100,000+ session views over three days. In case you missed out signing up for the conference, we have you covered — you can access all the videos at The Makers Academy.

None other than Paytm founder and CEO Vijay Shekhar Sharma laid out his product building template and ideas in a fireside chat with Inc42 cofounder and CEO Vaibhav Vardhan in the last session of the conference.

Sharma called upon India’s product makers to latch on to the digital rush that the Covid pandemic has forced upon us. Echoing Prime Minister Narendra Modi’s clarion call for an Atmanirbhar Bharat, he said that if the country’s youth doesn’t capitalise on the digital opportunity, then foreign players will.

To everyone’s surprise, Sharma also announced a contest for budding product makers at The Makers Summit in a completely impromptu manner. Two paid internships will be given out for product builders who can solve the following problems. You can see more about the challenges here.

While spontaneous remarks enlivened the session on a Sunday evening, the highlight of the session was Sharma revealing his product philosophy that helped Paytm hit 1.2 Bn monthly transactions, attract 20 Mn merchant partners, and notch up 145 Mn UPI handles and 328 Mn wallets. Most interestingly, VSS was forthcoming in laying out how the company draws its product roadmaps and executes those.

Here are the key takeaways from the Paytm boss’ product playbook:

Building The Product Roadmap Of A Payments Behemoth

“Over the years, companies like Facebook, Amazon, Google and Apple have been able to create a billion active users a year with everyday use cases like social, messaging, commerce and search. These use cases are moats that can be leveraged to build entire ecosystems of products,” said Sharma.

Likewise, Paytm’s payments products are an active moat which can be leveraged to build more products like Paytm Money, Paytm Mall and Paytm Games where users regularly carry out transactions. All of the company’s product decisions revolve around one simple rule — amplifying the network effects of payments to drive more engagement on the platform.

But there are a multitude of products that can be built to drive more transactions — how Paytm decides which one to build next depends upon factors like usage frequency (how often does a user carry out transactions in such a product), the size of the addressable user base and the transaction has to be mobile-led for most users.

Sharma explained this with the help of an example — for instance, if he had to make a choice between Paytm Postpaid (a buy now pay later product) and an imaginary product called Paytm Escrow, he would go with the former as it satisfies all the criteria better. For this reason, though Paytm has flight ticketing, train ticketing and bus ticketing, the company chooses to focus more on the latter two.

One legitimate question that one might ask is that flight tickets have the benefit of being disproportionately higher ticket size — and would easily lap up greater GMV in far fewer transactions than bus and train ticketing. 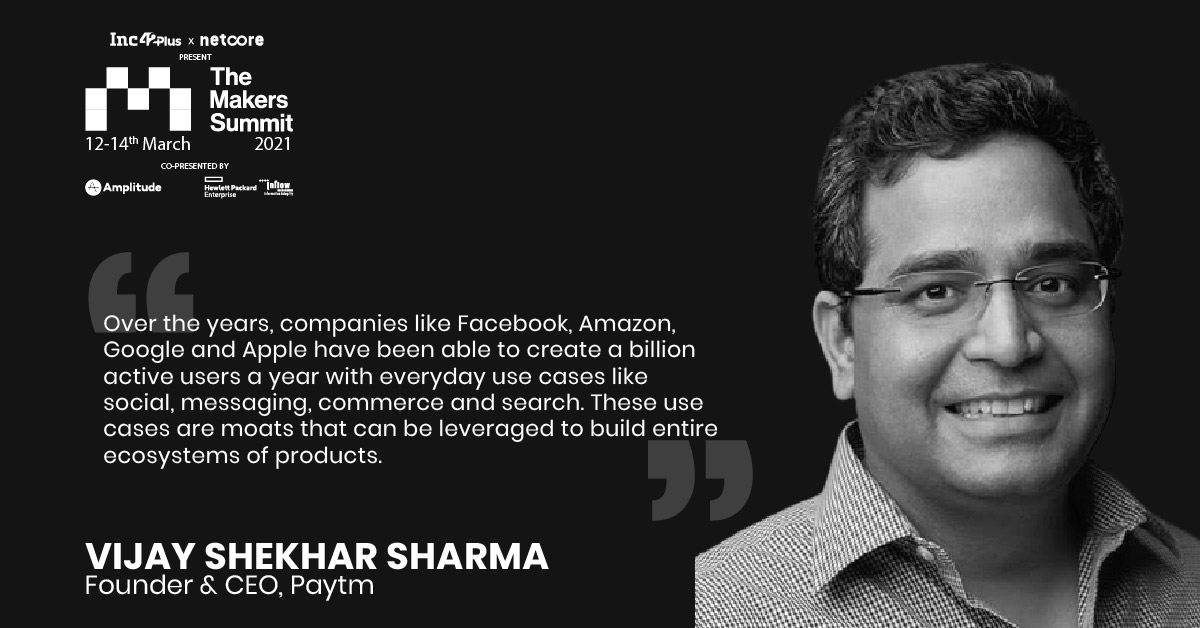 “Our definition of success for a product is a large number of users. The sequence we go by is user-transaction-dollar-delta. First you get more users, then you add more transactions, which in turn will build more dollars in GMV, and delta is profit. You don’t jump to GMV directly. No product is successful if there are less number of users and more GMV,” said Sharma.

That’s why even if a product is yielding more revenue but not lapping up enough users, Paytm would shut it down. But that doesn’t mean attracting more users by offering cashbacks and discounts — although such deals can bring in users, they can’t help build customer retention in the long run. The only solution is to create user delight.

“What has made our payments faster and more scalable is that we have built our own banking technology stack that is an order of magnitude better than any of our customers. There’s a saying that those who are serious about software will roll their own hardware. Similarly, those who are serious about payments will roll their own bank stack,” quipped Sharma.

While payments apps continue to splurge big on cashbacks and discounts, Paytm’s  single-minded focus on user delight has helped it cut expenditure on discounts and cashbacks to less than million dollars a month today from $20-25 Mn at a certain point of time. 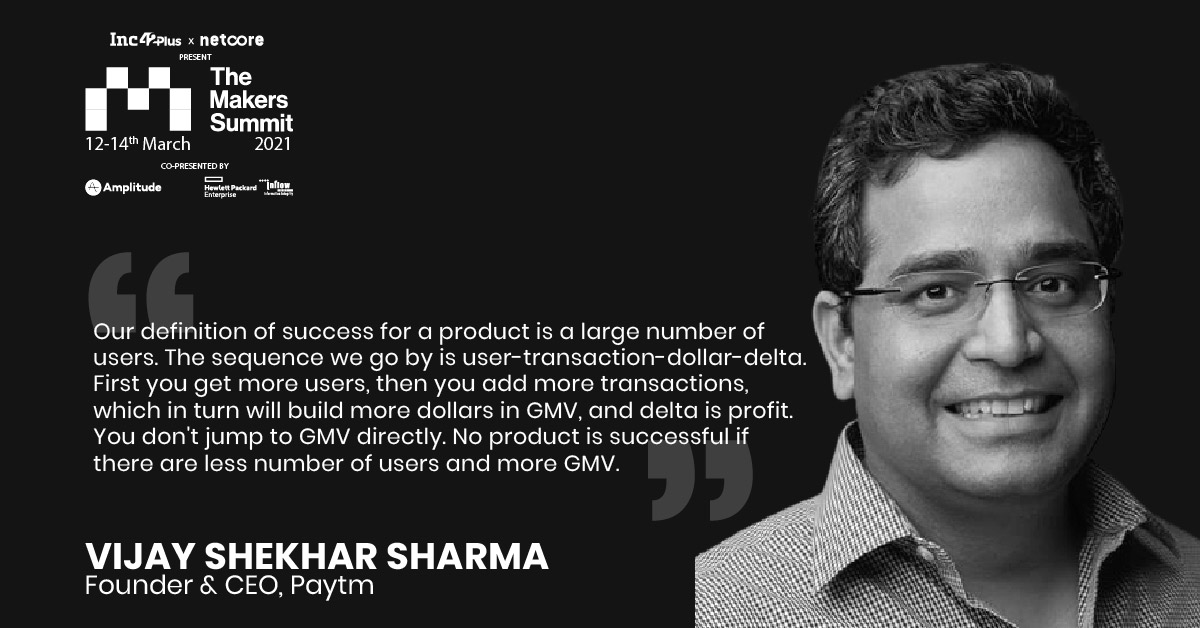 Decoding The B2B Play Of A B2C Giant

After a lot of power packed insights on Paytm’s B2C product philosophy, Inc42 cofounder and CEO Vaibhav Vardhan directed the conversation towards its B2B play. India is home to approximately 63 Mn SMBs as per the government of India’s estimate for 2015-16. Out of these, 44 Mn (or 70 % of the total) are unregistered whereas the remaining 19.5 Mn are officially registered.

This is a pool of value that Paytm is targeting with various products — not only in accepting payments through a soundbox — an app that can mimic a POS device, a payment gateway, QR codes; but also through a universe of products like invoicing, payments dashboard, digital ledger, billing software, food wallet for employees, digital gold for employees etc.

Though a lot of SaaS and fintech companies are building products for India’s SMBs today, there are common concerns such as it is very difficult to monetise the segment and customer retention is low.

That’s why Paytm, which currently has 20 Mn merchant partners and is aiming for 50 Mn, sees micro, small and medium enterprises that accept even as low as INR 10,000 a month in digital payments as a strong moat. This B2B user base can then be sold more products such as loans, investments and business tools.

But there’s a catch in painting the entire SMB market in one brush. Not only do different cohorts have different appetites to spend, their needs are so fragmented that they don’t constitute one single market that can be monetised with a single product, cautions Sharma. That’s not all however — there’s another pitfall that entrepreneurs need to be careful of when thinking of making revenue in the sector.

“You have to always be aware of what your primary product is and not overestimate the monetisation opportunities — not everyone will pay you INR 100 a month for a subscription product…. If you think you will promise an SMB that your advertising product will bring them business, you are mistaken. Boss, that’s somebody else’s business and you will just become an agency,” said Sharma. 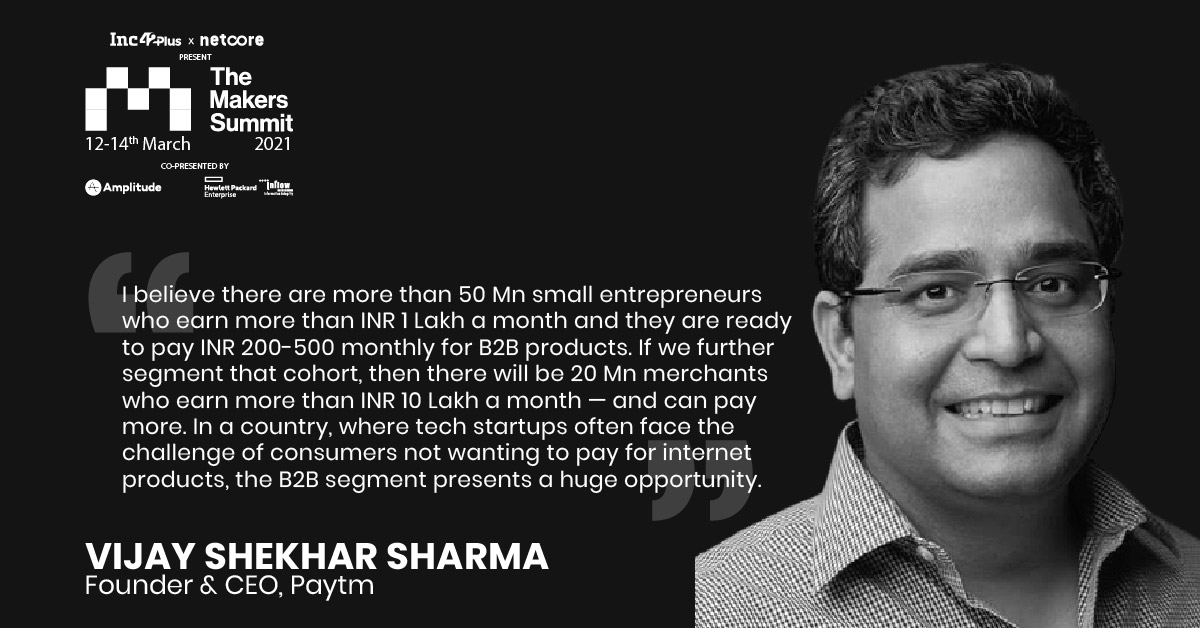