Union Budget 2019: What Women Leaders From The Indian Startup Ecosystem Expect From This Historic Budget

Union Budget 2019: What Women Leaders From The Indian Startup Ecosystem Expect From This Historic Budget 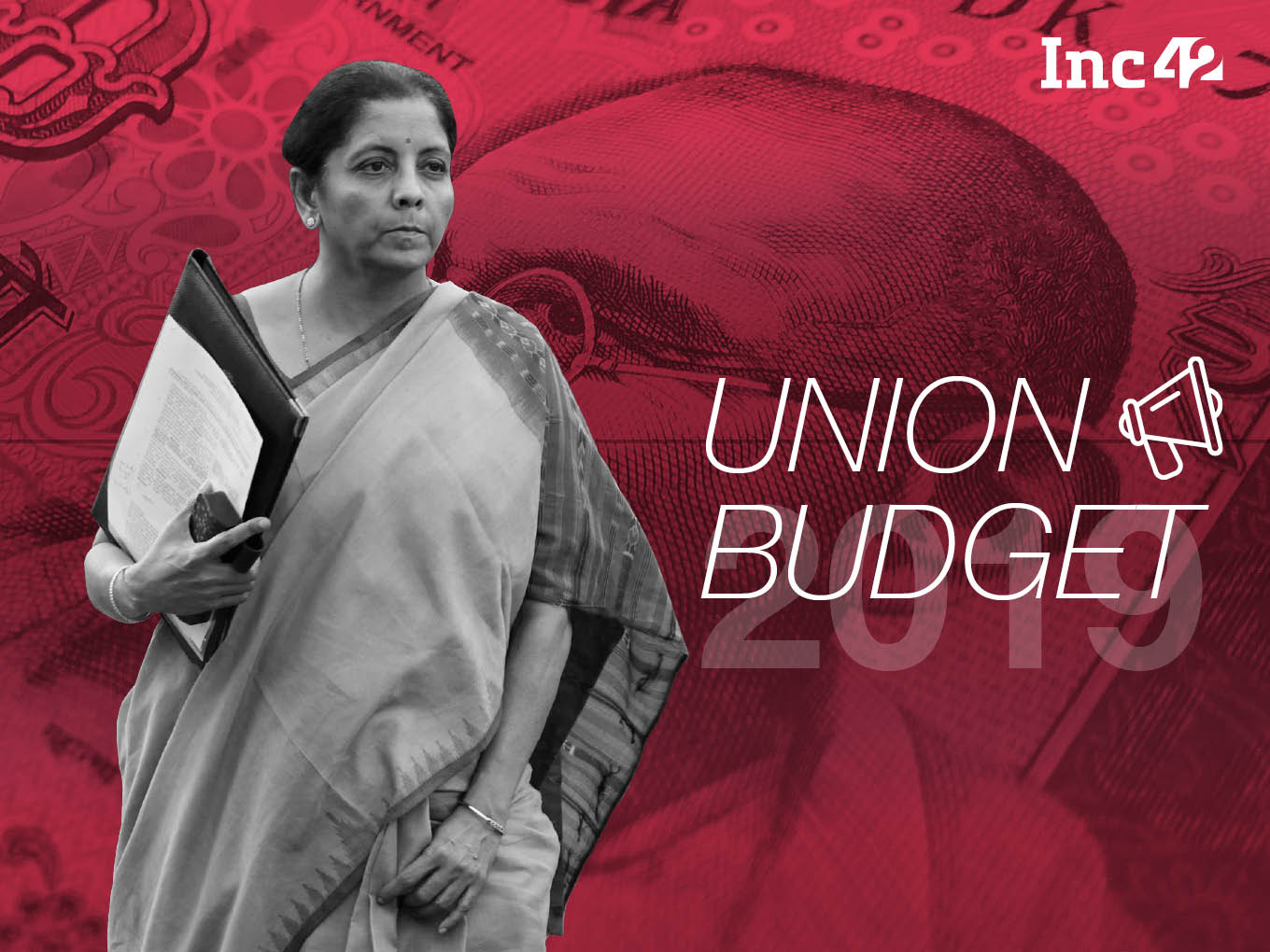 May 31, 2019 was a historic moment in Indian politics and particularly for the women in the country. Nirmala Sitharaman added another feather to her cap of achievements as she took oath to become the first full-time woman finance minister of India. While Indira Gandhi held the FM post for a brief time in 1970-71, she managed the finance ministry as an additional charge while she was the Prime Minister of India.

Sitharaman was also the first woman to be appointed as a full-time defence minister of India, and is known to have navigated the ministry through some troubled times and controversy at the end of her tenure. She will definitely need more of that conviction and vigour as the finance minister, especially as she prepares to release the Union Budget 2019 later this week.

Having a finance minister who knows a thing or two about battling criticism should bode well for women investors and entrepreneurs in India. Many of the women stakeholders in the ecosystem have high hopes from this year’s budget, which Sitharaman will be presenting on July 5.

Although the budget’s primary focus will be on promoting inclusive growth in the country by catering to diverse financial needs of various segments of the society, a particular emphasis has been placed on women entrepreneurs. India is home to more than 49K startups, yet only a small percentage of these startups have women founders or cofounders. When it comes to women investors, the ratio is even lower.

Not only are women are battling patriarchy and male-centric sociopolitical norms in everyday society, but they also have to face the same discrimination in the business ecosystem. Equitable participation in the startup business ecosystem is imperative to create an inclusive and holistic growth for the market, and the finance minister should take strong cognisance of this when forming the budget.

Inc42 spoke to a number of notable women entrepreneurs and investors to understand their views on Sitharaman’s upcoming budget session, and their expectations from the Union Budget 2019 in terms of women-centric policies or allocations.

According to a recent survey conducted by Nielsen for Britannia, 48% of Indian non-working housewives aspired to start a business or pursue a hobby to make money when they were younger. However, 69% of these women cited that they could not pursue these dreams due to lack of financial funding or skewed responsibilities at home, and a lack of guidance.

SafeEducate founder Divya Jain feels that this segment needs some much-needed attention and efforts need to be made to unearth such female entrepreneurs.

“The social milieu of India is not very supportive of women entrepreneurs – they comprise under 14% of the total number of entrepreneurs in the country. In this context, there is a growing demand for the government to give a boost to the STEP (Support to Training and Employment Programme for women) Scheme that aims to provide competencies and skills that enable women to become self-employed/entrepreneurs,” Jain said.

But before women can be encouraged to run their businesses, there needs to be a push to include more women in the workforce. Swati Bhargava, cofounder at CashKaro wants to see the government making provisions to bring women into the workforce, with adequate safety measures and infrastructural support in place. “Having additional provisions like access to business loans at a competent rate of interest and special investment schemes for companies solely founded and managed by women founders will go a long way in creating gender diversity in the ecosystem,” Bhargava added.

Mobikwik cofounder Upasana Taku said that special consideration needs to be given to support women in rural areas for participation in the workforce or in the MSME ecosystem, or in independent women-run businesses and action groups.

On the other hand, POPxo founder Priyanka Gill feels that all women need is a level playing field for financial inclusion. “I hope Ms Sitharaman will create and implement policies that foster an enabling atmosphere for women to flourish and also ease the regulatory confusion around compliance and policy especially for startup-specific issues,” she added.

Moving deeper into the ecosystem, Inc42 also spoke to angel investors Paula Mariwala and Dr Aarti Gupta who highlighted the importance of simplifying business operations and compliance through simpler norms and egovernance to encourage more women to get into the startup ecosystem.

“As a woman investor, I can attest that it is definitely more difficult for women to raise money from investors as well as from banks or other NBFCs. The government can introduce some innovative schemes for providing easy access to funding for women run startups as well as mandate banks to have loans and financial products for women,” said Mariwala.

Besides solutions such as women-focussed incubators and mentorship programs through NITI Aayog and other government organisations, the private-public partnership is essential to make sure that government initiatives reach all stakeholders and create a holistic impact. “I am looking forward to a very vibrant and positive response from the finance minister for empowering women across sectors,” Mariwala added.

Dr Gupta further added that the finance minister is likely to initiate policies that encourage more women to become entrepreneurs.

“I think till date, the female to male ratio of entrepreneurs is quite low, and that probably is due to the fact that women find it a lot harder to take risk and pursue their entrepreneurial journey,” she added.

As CashKaro’s Bhargava said, India is currently the melting pot of brilliant ideas and concepts which makes a startup-friendly budget the need of the hour. Women entrepreneurs and investors in the Indian startup ecosystem expect the government to introduce policies that offer more support to the startup community.

“Some good examples to follow are countries like Singapore that work actively towards benefiting startups by reducing corporate taxes, relaxing compliances, reducing the rate of TDS and keeping paperwork investor friendly. In the same vein, others like the UK offer tax relief to angel investors for investing in start-ups via schemes like EIS,” she added.

The relaxation of regulatory norms and compliances and the introduction of a single window clearance for startups was another key demand from Indian women entrepreneurs and women investors. Dr Geetha Manjunath, CEO and CTO, Niramai hopes there will be some good benefits and tax structure for all startups who are yet to break even. “A lot can be done to support the adoption of startup products and services by government, which is critical to fuel the startup ecosystem and the Make in India principle,” she added.

Here is a summary of some of the other demands and expectations coming from women entrepreneurs and women investors Inc42 spoke to ahead of the Union Budget 2019:

Gender Equality In India: A Challenge For Generations

While on the one hand, the appointment of Sitharaman has been a moment of pride for the Indian society, it also begs the question of whether that is enough to bring in gender equality, especially at a time when India claims to be in the league of nations that are on the verge of becoming developed?

“I strongly believe that while we talk of women empowerment, it is now vital to take this conversation several steps higher and start talking about gender equality,” Mobikwik’s Taku said.

As per the WEF’s Global Gender Gap Report 2018, India ranks 108th out of 149 countries, the same as it was in 2017. This clearly shows that the country needs proactive measures that support gender parity and social inclusion. Empowering women can have a positive impact on the economy. A recent study found that 35% of employees with specialist technology roles in India are women, compared to 17% in the UK. Five of the largest Indian banks have been led by women in the past decade.

According to Mariwala, there have been many powerful women in powerful positions in India but finance and defence have remained male bastions. Mariwala and Dr Gupta further believe that it is also the right time for women to have role models such as the finance minister to inspire more high-impact careers.

Sharing the viewpoint Shivani Poddar and Tanvi Malik, cofounders of FabAlley believe that women entrepreneurship should be promoted by all means, by providing collateral free, no interest debt with favourable repayment terms.

As Mariwala aptly summarised, “I am thrilled and proud to have a woman as our finance minister and hope that this inspires many more women to dream big. I also wish that a time comes when seeing a woman in such powerful roles becomes more of a norm than an exception.”