A Rare Three-Way Merger: Behind The Hotelogix-AxisRooms-RepUp Union

A Rare Three-Way Merger: Behind The Hotelogix-AxisRooms-RepUp Union 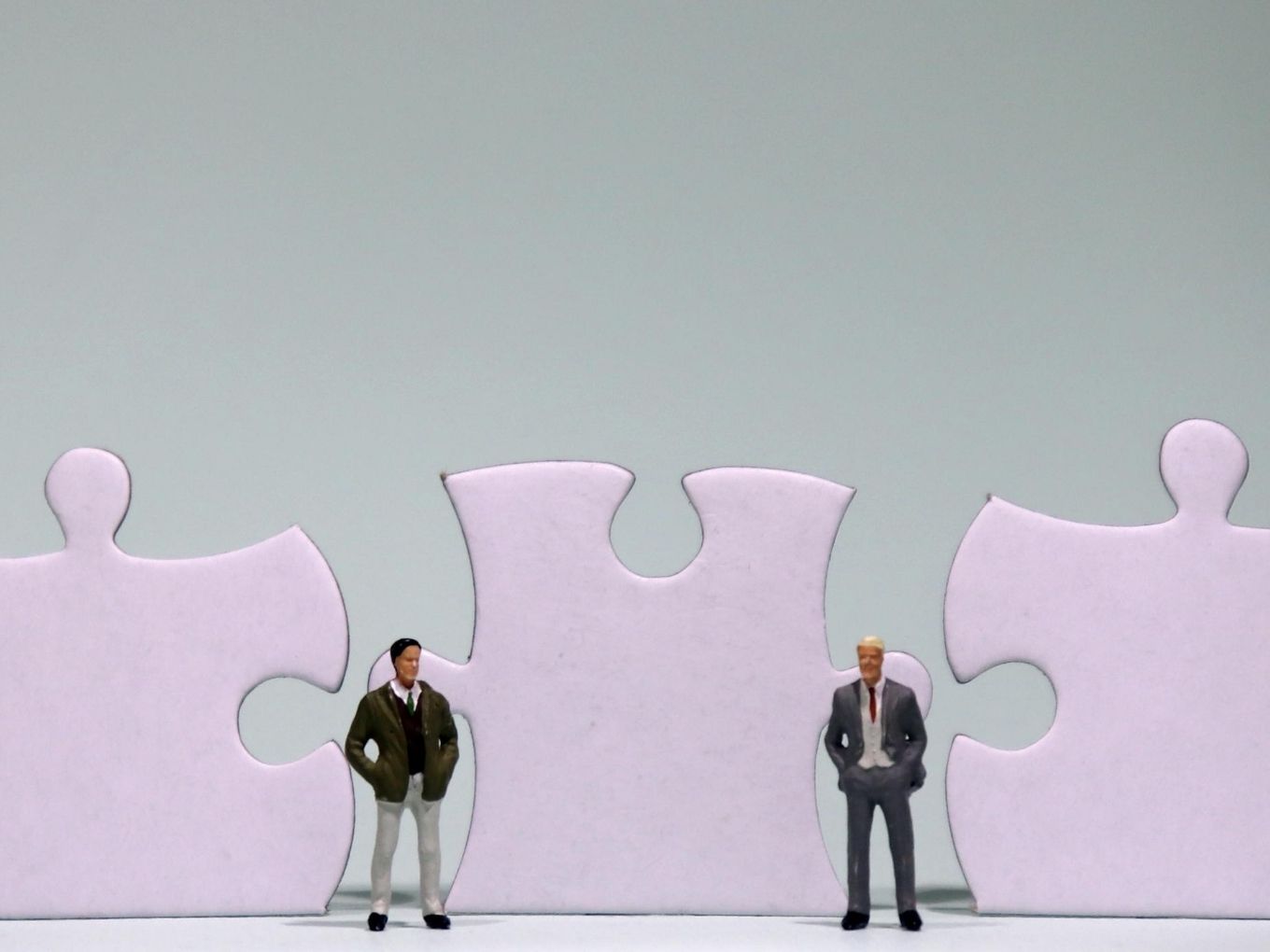 Multidirectional data from guests, pricing engines, distribution channels will be leveraged to lend more teeth to each other's products

The three companies combined had 5.6% market share of the entire competition pool in January with 5,000 customers

“Andar se dil ki awaaz aayi, this journey looks too treacherous independently, that’s where the thought that how about we come together germinated, let’s make it complete so that we can do not just an incremental change but a huge impact”, recalled Hotelogix CEO Aditya Sanghi.

A three-way merger is a rare occurrence. And when it happens amid a black swan event like the pandemic, it draws more attention to itself. Hotelogix, AxisRooms and RepUp, three startups that provide SaaS solutions to the hospitality sector, announced their merger last week through an all-stock deal even as the hotel industry worldwide is still reeling under the pandemic. Up to 53% of all hotel operators in India shut down more than 80% of their inventory during the lockdown and the revenue loss for the sector in 2020 is estimated at INR 89,813 Cr. Meanwhile, US hotels had already lost more than $46 Bn in room revenue by July end.

The three companies managed various parts of hotel operations and are now looking to combine their suites to offer a single-window system.

Founded in 2008 by Aditya Sanghi and Prabhash Bhatnagar, Noida-headquartered Hotelogix offers a property management system for hospitality businesses to manage operations such as check-ins and checkouts.. Bengaluru-based AxisRooms offers distribution and revenue management systems and was founded in 2011 by Anil Prasanna, Leema Rosali and Ravi Taneja. Meanwhile RepUp, based in Gurgaon, was founded in 2014 by Pranjal Prasher, Vinit Chouhan and Sachin Agrawal. Xperium, its flagship product, is used by premium hotel brands such as Radisson and Marriott to optimise guest experience. 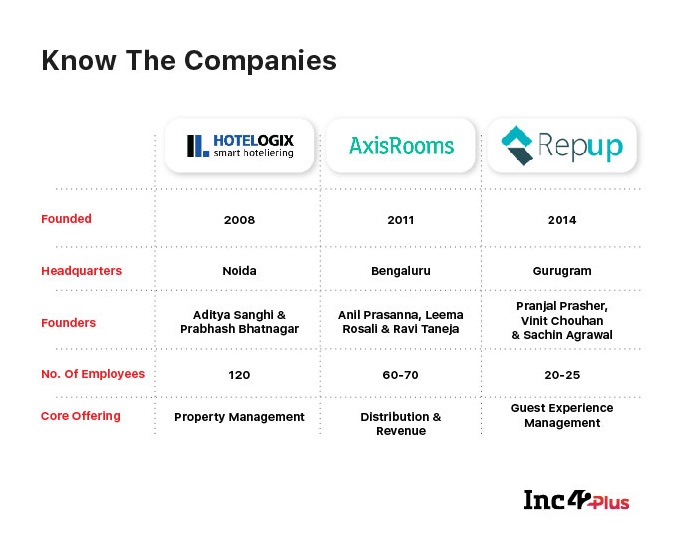 Sanghi, the chief executive of the merged entity whose brand name hasn’t been decided yet, says the idea of the merger struck over lunch with AxisRooms cofounder Ravi Taneja. Over the meal, they had a realisation.

“We were doing our journeys and both were chasing the same types of customers and doing it separately and making it really big — standalone — is going to be a very long drawn process. So we flirted with this idea — how about doing it together?” said Sanghi. That was a year ago.

The Many Miracles Of Full-Stack Hotel SaaS

What firmed up the belief in the merger was that no SaaS player in the hospitality segment was offering a full-stack solution that would take care of everything related to running a hotel. “If you have an agent who will take care of the fridge, TV and everything else at your home, why would you want to go looking for anyone else?” says Sanghi.

While the obvious implication of merger of Hotelogix, AxisRooms and RepUp is the creation of a full stack solution to manage hotels, the not-so-obvious-one is the multi-directional data that the three companies will bring to the table. Sanghi says, “If we play the game of data very well, we can give more teeth to each other’s product.”

A key data point in how a hotel prices its rooms is the price tag that a competitor is offering — if your competitor is charging INR 5,000 then you don’t ask for INR 5,500 for a similar suite. However, if the rival hotel has a substantially lower rating on a popular review platform such as TripAdvisor, you might charge that extra INR 500.

“This means marrying the data of two technologies — it doesn’t exist in one single product, globally… people do this manually… (we thought) how about giving the power of automation to a small hotel which can utilise this to make an intelligent pricing decision,” says Sanghi.

This also streamlines the customer acquisition strategy and makes upselling easier. Further, Sanghi says “If there’s an operation technology like ours then putting in an ancillary tool on it is easier, but if you have an ancillary technology let’s say if you are using a Zoho CRM for your marketing management for your sales team, because of Zoho you will not change your SAP implementation. But it’s an easier decision to add something on top of your SAP.”

RepUp cofounder Pranjal Prasher believes a key consideration for the merger was that combining the three companies abilities would significantly lower churn and the customer acquisition cost would drop to one third. To this, Sanghi added that the upsell/cross sell opportunity alone could lead to revenues jumping by 30%.

Jagadeesan Kumar, managing Partner at JV Advisors LLP, who acted as the exclusive financial advisor for the three companies during the merger, told Inc42, “Investors were willing to write a larger check (for the merged entity), but then it became a question of where are you going to utilise the money.”

Covid-19 played spoilsport in implementation of the playbook that was created for the merged entity. He added, “The first goal was to ensure we live to fight another day which is a priority of most travel tech companies. In that background, it was a conscious decision that we will be extremely optimal with capital at this point of time.”

Taking a look at the merger presentation slides accessed by Inc42, it’s clear that the three companies are far behind their peers in the hospitality industry in the SEA market which Sanghi said is one of the strengths of the merged entity. “The likes of Rategain are partners to us. They have a technology which they are good at and their customer base is slightly more upmarket,” he said.

The three companies combined had 5.6% market share of the entire competition pool in January with 5,000 customers, while its competitors had 84,000 customers among them. The combination’s share of the pool in ARR terms was just 3.37%. 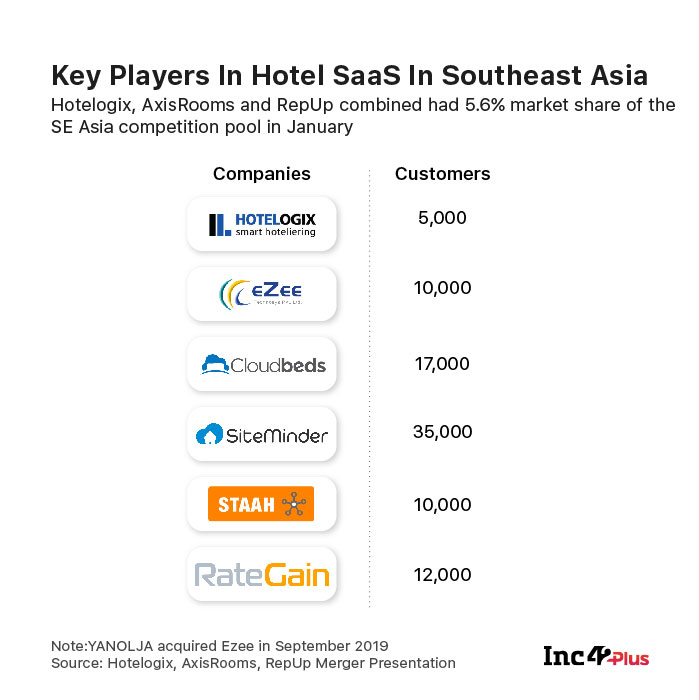 Sanghi and Taneja also brought RepUp cofounder Pranjal Prasher on board as the idea would work out only if they had a full stack solution. The founders of the three startups made it a point to huddle at least once a week and discuss what it would mean to join forces. Their investors were receptive to the idea but cautioned against rushing into it. Sanghi says, “They gave some ideas about what are the things that we should be looking at while we are discussing the whole thing. They said, ‘don’t hurry into it, we will stand by your decision, give yourself enough time because it’s almost a marriage’.”

Another factor that needed careful consideration was that the three teams were based in three different cities and would have completely different cultures. Integrating their distinct cultures wouldn’t be an easy task. The plan is to retain all employees after the downsizing during Covid. RepUp, the youngest startup of the three, has 20-25 employees, while Axis Rooms has 60-70 employees and Hotelogix has over 120 employees.

Apart from no fresh layoffs, another bright spot could be that five of the eight founders of the three startups are staying put to steer the new company in different leadership roles. Hotelogix cofounder Prabhash Bhatnagar will look after the SMB segment of the business, RepUp CEO Prasher will look after the product function, Ravi Taneja, COO of AxisRooms, will head operations and Anil Kumar Prasanna, the CEO of AxisRooms, is going to mind new market development alliances.

AxisRooms’ Taneja said that the first big puzzle in the new house was to solve what the top level management will look like. “Since we had a banker who was sort of common across the three companies, we made him run through this whole process so that each founder should ideally give his own strengths and ride the strengths of each other, and recommend who deserves to take first of all the top position which is CEO,” he said, adding that Adtiya Sanghi was the unanimous choice.

The merger deck also cleanly laid out a case for the merged entity’s share of a customer’s wallet at $4,500 pre discount, a 3X multiple of Hotelogix’s share before the merger that Sanghi said was $1,500.

Launching an AIOS (all-in-one system) and brand repositioning are listed as the firsts steps towards achieving the target. Sanghi said:

“We will have to build a horizontal platform if we have to leverage all that data… We don’t want to limit it to ourselves… So once we get this middleware right between us, then we will open it to other third parties and even to competitors who want to plug into it.”

However, there’s no clarity on when the unified platform will see the light of day. What we know is that the merged entity will be held as Hotelogix Pte, Singapore, though a brand name hasn’t been finalised yet. Sanghi said that the objective is to unify and consolidate the businesses first given the ‘red zone’ that the market is in due to the Covid-19 pandemic.

Four months after the operations of the three companies were supposed to have been combined, but the brand strategy is yet to be decided. Prasher added that even when the integrated dashboard materialises the companies will continue to offer modular products, adding, “There are around 12 or 13 independent products we can’t impose the entire suite on anyone. But at the same time if they are able to adopt the entire suite then the cost benefit and overall functionality benefit will be significantly high.”

As is the case with all players in the hospitality industry, Hotelogix-AxisRooms-RepUp too has its fair share of problems to deal with because of Covid-19. “Everyone has been largely burning some cash before Covid. Covid set everything aside. No cash burn, nothing, everybody has to be cash flow positive,” Sanghi emphasised, adding that none of the three companies have been EBITDA positive as they have been investing for growth.

Parts of the story were edited to remove ARR figures of the companies named in the story.