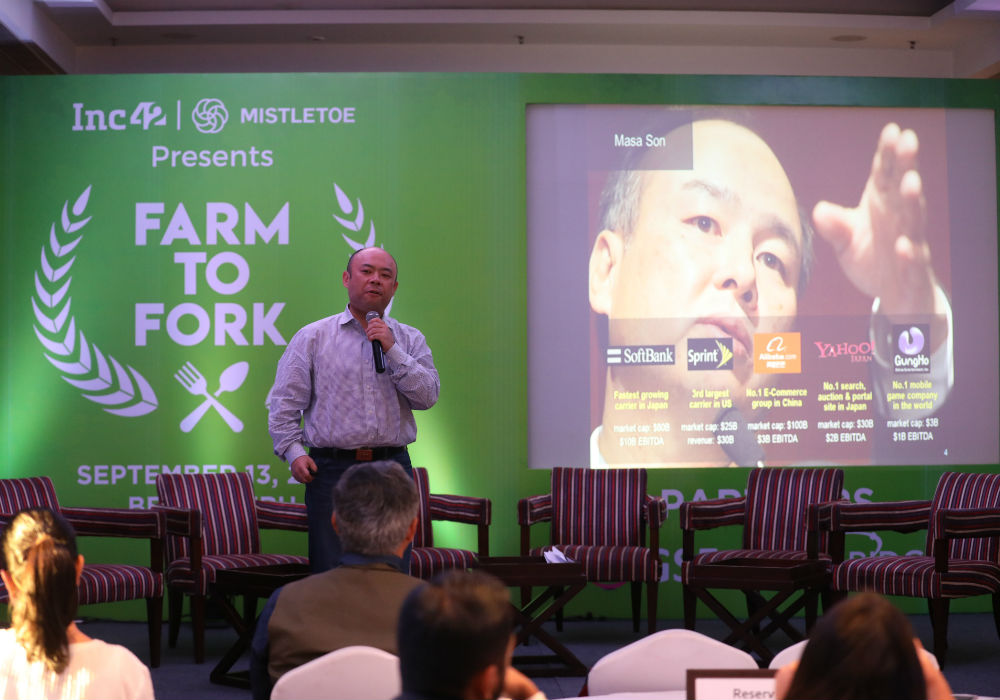 At Farm To Fork, Billionnaire Taizo Son Spoke About His Entrepreneurial Journey And His Latest Agrifood Venture

“Startups are idea-driven, providing a solution to some specific consumers’ problems. However, when it comes to the farm to fork sector, there are challenges at multiple layers which need a working synergy among the startups catering to space,” says billionaire and a self-made entrepreneur turned investor Taizo Son while starting a new chapter ‘Gastrotope’ in India’s agrifood startup segment.

According to Forbes, Taizo Son is Japan’s 30th and world’s 828th richest billionaire. His brother Masayoshi Son (Masa), Founder and Executive Chairman of SoftBank is Japan’s 2nd richest billionaire with a net worth of $13.9 Bn. While Taizo could have all the fun working with SoftBank where he is currently an Advisor, being an entrepreneur at the core, his approach towards investments and hence his business strategies are completely different from that of his brother. He even says, “Masa is not my role model.”

And we found the reason for this at Inc42’s Farm To Fork event held on September 13, 2017, in Bengaluru. As he explains, “My brother Masayoshi Son, Founder of Softbank and I have 15 years of age difference. As a young entrepreneur, I was more inclined to other young entrepreneurs. Perhaps, the reason, I couldn’t benchmark Masa, as my role model.”

Yahoo Japan: The Making Of An Entrepreneur

In 1996, Yahoo Japan was launched by SoftBank in partnership with the parent entity, the US-based Yahoo with a majority shareholding in the combined entity. With Softbank watching its back continuously, Yahoo Japan is not only still in operation, but is, in fact, thriving with a size thrice bigger to Google Japan. Speaking about the Yahoo Japan launch, Taizo Son recalls, “I met Jerry Yang, the founder of Yahoo, 23 years ago. At the time, we both were students. While I was studying at Tokyo University, Jerry was at Stanford.”

He further added, “When I met him for the first time, he said something awe-inspiring to me which was “Yahoo would make Apple uphold in front of Newton.” What does that mean? With this statement, Jerry predicted that in future, every piece of wisdom will be upheld by the Internet. With Yahoo as an Internet enabler, future Einsteins, Newtons or Edisons would get inspired by the wisdom to make some disruptive innovations.” 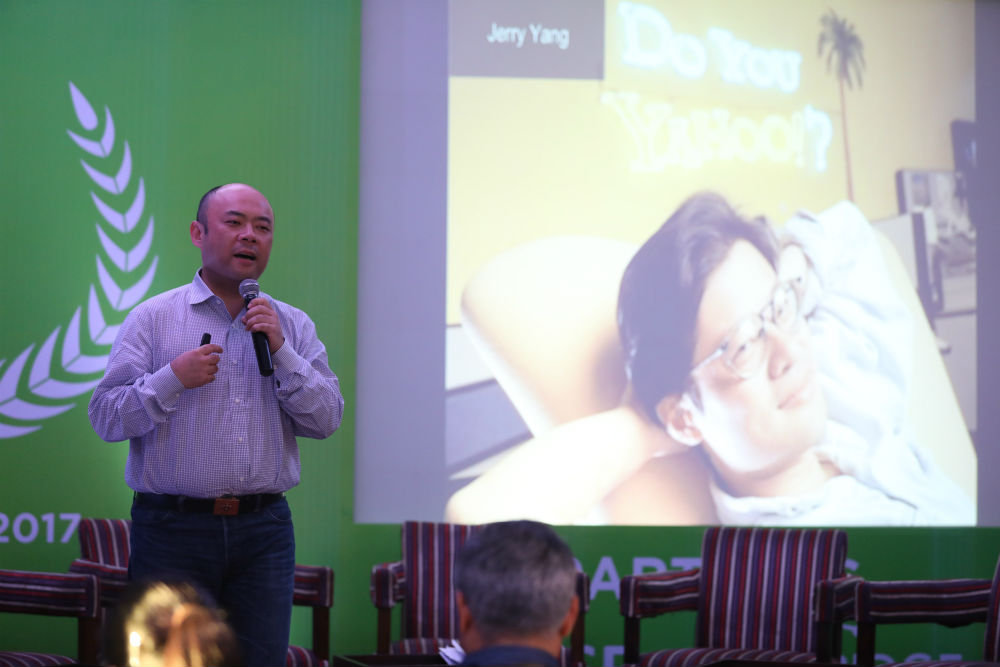 “I was so moved by this thought-provoking idea that I instantly volunteered and said, “Hey, I would like to be a part of your effort. This is how I, along with Jerry, started Yahoo Japan. Next six months, I spent at SoftBank office working 20-hours a day to launch Yahoo Japan.”

Till today, Yahoo Japan remains one of his most successful ventures of SoftBank. The company’s web portal is one of the most visited websites in Japan, and its Internet services are still the most dominant in the country. Despite Yahoo being renamed to Altaba owing to its acquisition by Verizon, Yahoo Japan remains in operation with its original logo.

During the development phase of Yahoo Japan, it was Jerry who advised Taizo Son to start his own company so that there could be an official contract and MoU between Yahoo and Taizo. “That’s how Taizo established his first company.”

Yahoo Japan has been a big success, so has his other entrepreneurial online gaming platform Gung Ho, with its Puzzles and Dragons series — one of the top downloaded games worldwide. In 1998, Taizo Son co-founded OnSale, a JV between Softbank and US’ OnSale, for the purpose of online interactive auction businesses. However, in 2000, the company shifted its focus to online gaming under the new name ‘Gung Ho Online Entertainment Co., Ltd’. Listed in JASDEC, the company is currently one of the leading gaming companies in the world.

Failure is the biggest fear of every entrepreneur. Like most startup founders, Taizo Son too has undergone it; however, unlike others, he seems to have learnt how to make peace with failure. At Slush Asia 2014, held in Tokyo, speaking to a journalist, he shared how his brother Masa helped him in dealing with failure. “It was my fifth startup. I was running out of money, there was nothing left to pay employee’s salaries. Masa, sensing my troubling times, called me and said, “Though I can easily lend you some money to take you out of this financial trouble; but I would insist, you must go through the failures and learn how to deal with them,” recalled Taizo, as one of the most valuable advice he ever got.

Behind every successful company, I have had almost two failed companies - Taizo Son

During the Farm To Fork event (hosted by Inc42 along with Mistletoe), encouraging aspiring startup founders, Taizo Son says, “The failures, I have gone through, made me confident enough to face all sorts of challenges.”

“I have already been supporting young entrepreneurs; however, the desire is to help build the startup ecosystem. Some of these are good successes and I could make some capital out them. And I felt I should give back to the ecosystem, the society. Thus, Gastrotope would be my latest startup to give back what I got  from the society.”

Taizo Son’s investment firm Mistletoe has already invested some $160 Mn in 92 startups and ventures across 11 countries. Among these are three Indian companies, including Rajesh Sawhney’s InnerChef. Rajesh is also the founder and CEO of GSF India, India’s leading accelerator that has funded so far to 45 startups. 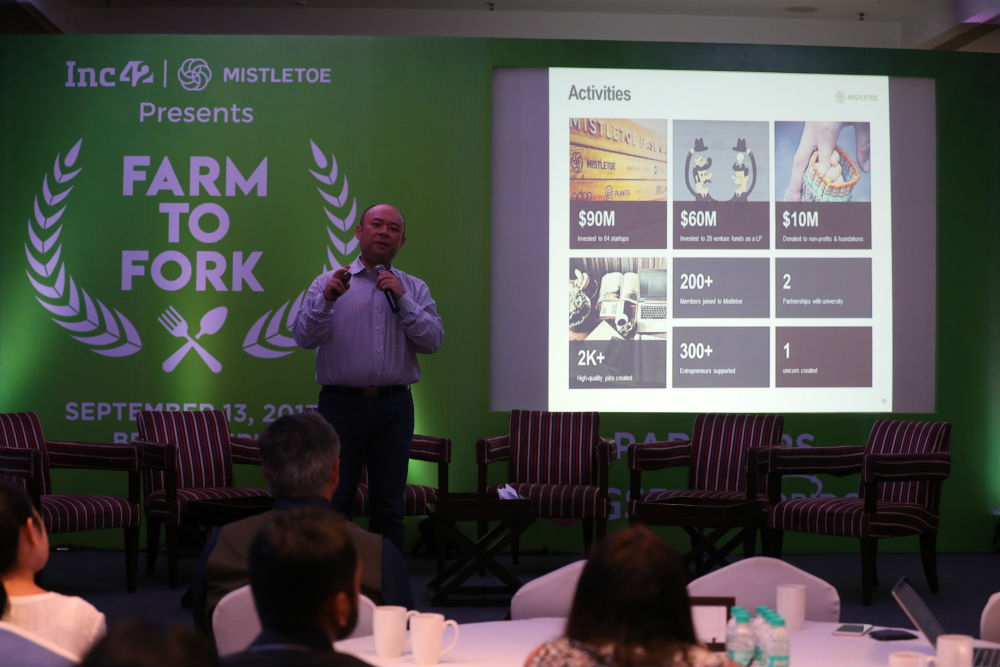 Unlike Masayoshi who is aggressively pitching for IoT, AI, Fintech and ecommerce, Taizo seems to be interested in investing at a foundation level that could help develop a new ecosystem, not just help the existing one. Starting a school in Tokyo to encourage students to learn without teachers was one such step. In India, agrifood is one sector which has a great potential, yet suffering badly. For instance, 40% of entire food produced gets wasted and thousands of farmers commit suicide for various reasons, primarily due to their inability to return bank loans.

Taizo Son avers, “Yes. I am aware that India’s agrifood sector has multiple challenges. There is no instant fix for this. That’s why we want everyone: all the agrifood startups state and central governments, and us on the same page. This will not only help connect the dots but also bring synergy among them to develop the necessary ecosystem.”

We need to develop a supportive ecosystem to build a new age farm to fork economy. We will sow the seeds, trees will come naturally.

During the farm to fork event, he also spoke about  ‘Gastrotope’, an accelerator platform which was launched a day later in association with tech accelerator, GSF India and Indo-Japan business consultancy firm, Infobridge. The platform aims to step up from Taizo’s existing investment-only-model to help integrate the entire agrifood startup ecosystem.

Explaining Taizo Son’s perspective further, Atsushi Taira, Chief Growth Officer and Representative Director of Mistletoe stated, “There is a growing synergy between India and Japan. AgriFood is one sector where there is huge potential to implement the synergy by exchanging ideas and skills. This is why we are here to help create some impact.”

Most of the startup solutions come from tech space and in case farm to fork, the biggest challenge lies at the foundation level. Most of the Indian farmers are uneducated. While many don’t own a mobile, most of them don’t even know how to use a mobile app. Speaking to Inc42, Taizo Son added, “Farmers are an essential part of Farm to fork community. Farmers are smart enough even though they may be uneducated; we think they will intuitively get the benefits.”

As some of the domains of agrifood sector such as farming, logistics, policies and technology implementation will take its own time to bridge the gap while building farm to fork ecosystem. Taizo seems to be in no hurry, “India has potential to lead the world and become the centre of excellence for new age farming. We are a catalyst for this transformation. The Gastrotope programmes won’t be for three or six months but long enough to ensure things happen.”

While his ‘big’ brother’s investments are currently the backbone of India’s ecommerce startups turned unicorns, Taizo definitely endeavours to play a similar or larger role in Indian farm to fork segment. Speaking about how Gastrotope would help build the agrifood ecosystem, Taizo Son says, “We are open to Public-Private Partnerships (PPP), as the role of state and central government is huge in the rural economy and farming sector. We are seeking collaboration. Forward-looking states in India today totally understand that the challenges of farmers and farm to fork sector can’t be solved by subsidy alone; these require innovative solutions that startups can provide.”

The larger picture of Indian agrifood is still bleak. As with the government, yet to come on board (or show interests) with Gastrotope and other accelerators across the states in these segments, these domains remain disconnected. However, with Taizo’s no-exit policy and his endurance as a catalyst regarding Indian startup investments, the sky looks brighter from here on out.