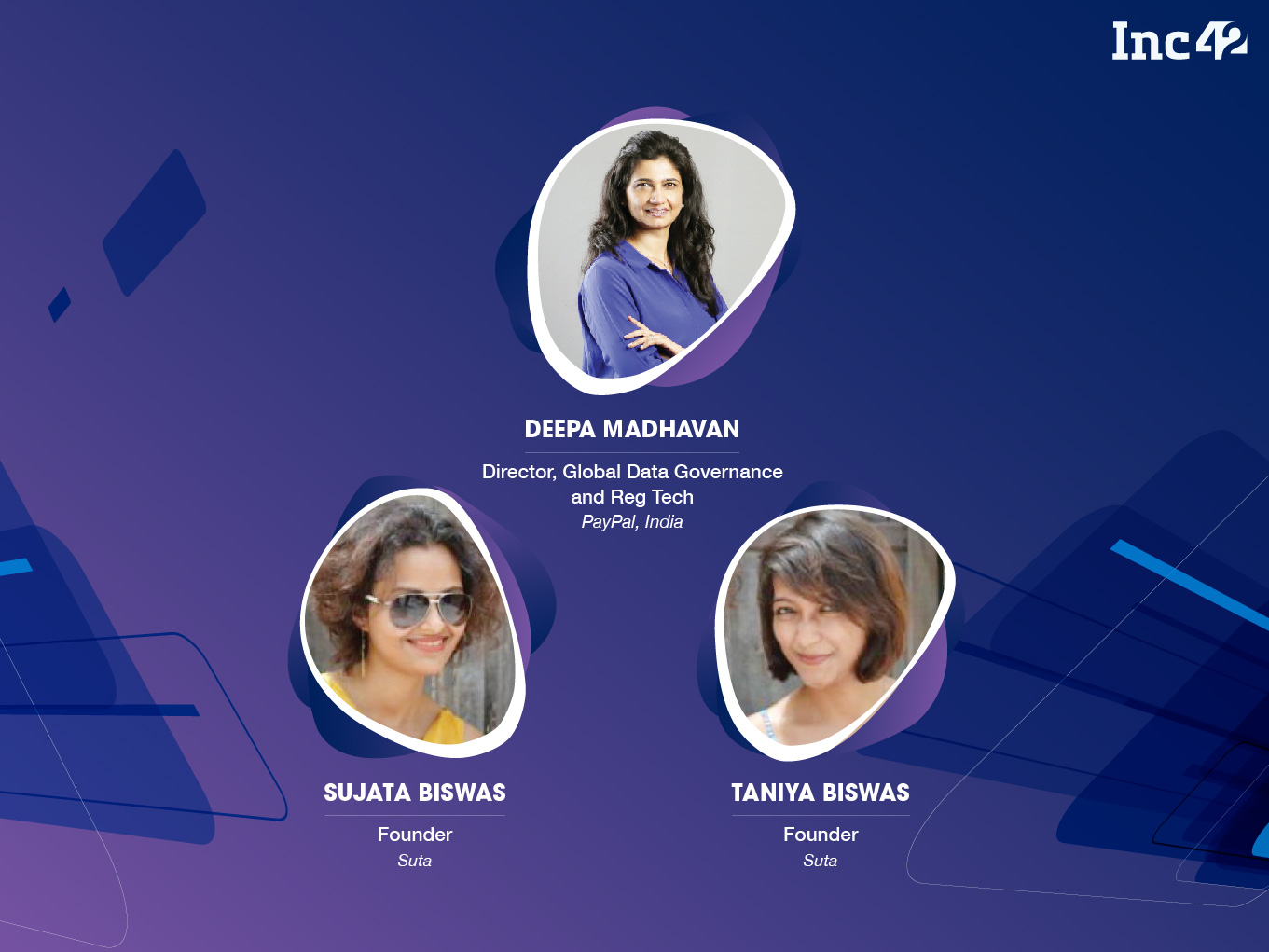 The freelance economy — with an increasing number of gig-workers and entrepreneurs — is seeing a massive upward swing in India.  With roughly 10 Mn freelancers, the country not only takes the cake for having the largest number of freelancers globally, but it also is home to an impressive growing startup community with a 39K active startups currently. Work-life balance, a chance to pursue one’s passion, and a sense of fulfillment are the main reasons why more and more workers are moving towards building independent careers by following their calling.

In Inc42’s recent webinar — How To Make A Career Of Your Calling: Learn From the Experts — Taniya and Sujata Biswas, cofounders of SUTA, spoke about how they quit their successful corporate careers to follow their passion and build a startup. SUTA is a Mumbai-based design studio with a focus on blending traditional and contemporary art and design.

They were joined by Deepa Madhavan, Director, Global Data Governance & Regulatory Technology, PayPal who shared her views on how PayPal enabling freelancers and small and medium merchants grow by offering them a convenient and safe payments solution and also spoke about PayPal’s focus on diversity and inclusion.

From Corporate Jobs To Entrepreneurship — The Journey Of SUTA

Engineers by education, the Biswas sisters spent their initial few years working with reputed corporations. But a thought which often lingered in their minds was to do something which they were passionate about that could also impact lives.

With this passion, they decided to follow their calling — a love for handlooms — and founded SUTA in 2016 beating all odds. Today SUTA has an annual turnover of over INR 5 Cr with 30 members and 780 weavers across India.

“Initially, our family was skeptical, because in our entire family nobody has been in any kind of business. It’s a common mindset that only members of a business family can start a business. But now our father works for us, our entire family supports us and we have a big support system in them,” said Taniya.

Being Women Entrepreneurs & Workers In India

Women founders still account for only 13% of all startup founders globally. And more often than not, the reason for that is the lack of a proper support ecosystem. For Suta, the experience has been both good and bad. There were a lot of challenges for the cofounders initially, mainly due to the common mindset that women quit their startup or careers after marriage or having a baby.

“When we were initially looking out for the vendors, we were cheated because people believed that as women entrepreneurs we will not last long,’’ stressed Sujata.

But Taniya and Sujata took things in their stride, fought the taboos and turned every obstacle into an opportunity for growth. What they faced as women founders became a reason for them to give a platform to other women, which is evident from the gender ratio in their team with 60% of the employees being women.

As women entrepreneurs who have seen the corporate story as well as the startup environment in India, their tips for anyone wanting to build an independent career are simple.

“The first thing you need to do is find an idea. There are a lot of things you have to take decisions for, many a time you might question yourself about whether your decisions are right or wrong; but if you have a vision, even if you’re wrong now, you can just correct yourself later. So never get disheartened or lose faith,” said Sujata.

The other doubt which often crops up in aspiring entrepreneurs is competition, to which Taniya said, “Never think that the market is already cluttered, don’t think that there’s no space for me. There will always be a customer base who will actually appreciate your hard work. You should believe in what you’re doing, you should believe in the product that you’re making.”

One of the key reasons that many startups and independent workers have been able to taste success is the accessibility and rise of digital payments. Digital payments enablers like PayPal have helped many companies expand their customer base, protect users and build trust.

Whether it is through invoicing, website payments or simplifying the FIRC process,  PayPal is one of the companies leading the way in empowering freelancers and small and medium businesses.

“One of the flagship offerings that we have is Seller Protection. Not getting paid or having a delinquent client who is delaying payments is the biggest fear that freelancers or SMBs have,” said Madhavan.

PayPal’s Commitment To Empowering Women Within The Organisation

PayPal is fully committed to empower its employees, especially women, through its inclusive programs and initiatives to bring diversity and inclusion into the organisation.

“We have a program called ‘Girls In Tech’, a flagship initiative which offers young girls a hands-on experience with programming making it fun, meaningful, something that is accessible and not something to be afraid of,” emphasised Madhavan.

PayPal also has an outreach program called ‘Recharge’ designed to increase diversity in technology while also giving individuals who want to return to work an opportunity to expand their experience and network. “With Recharge in India, we want to encourage women technologists who’ve taken a break to think about getting back to work and equip them with what they need to take this step. At the end of the program, we want to give some of these women the opportunity to work with us at PayPal to build next-generation payment solutions,’’ signed off Madhavan.