Org Chart: The People With Power At IPO-Bound RateGain

Org Chart: The People With Power At IPO-Bound RateGain 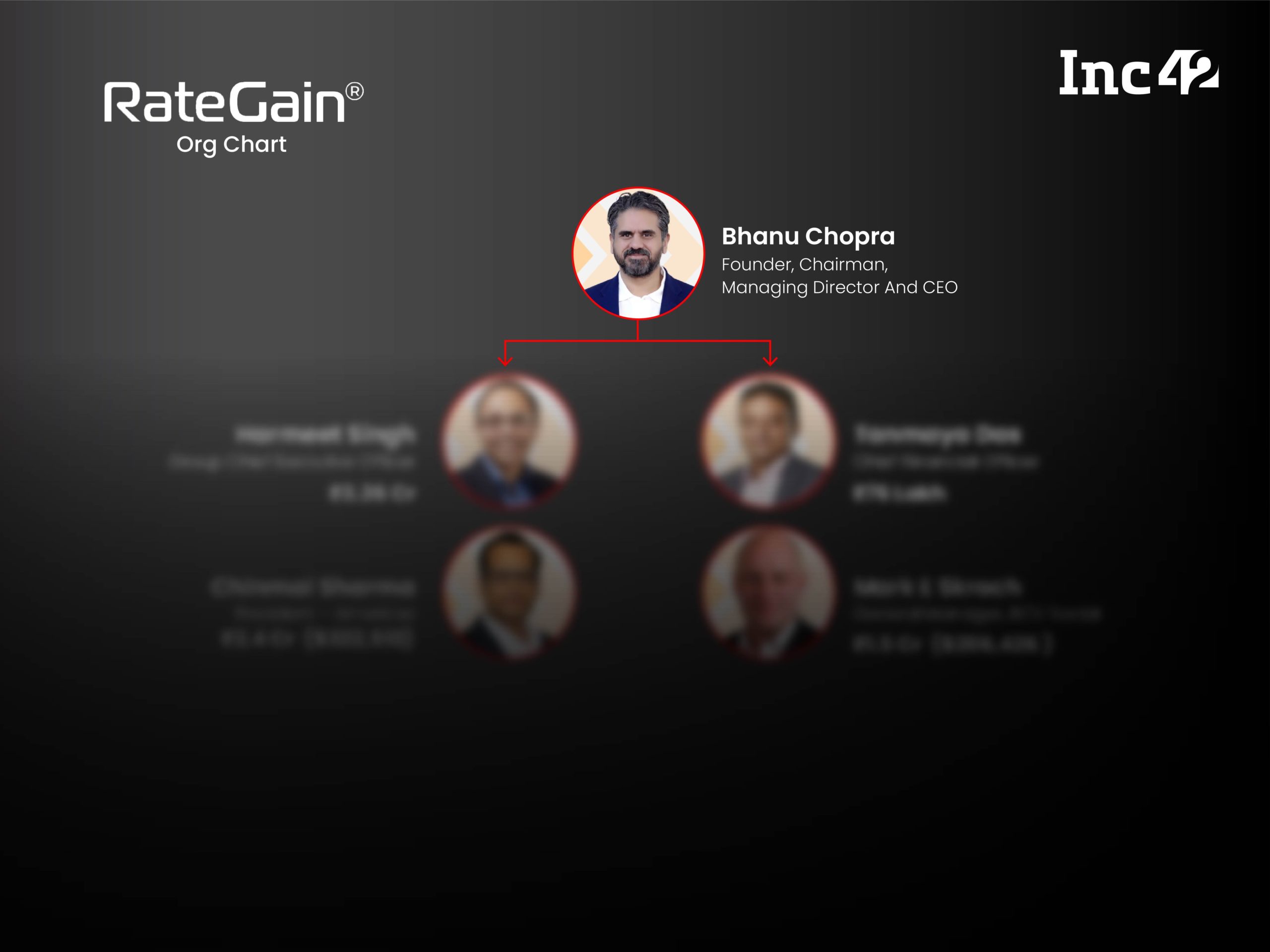 Founded in 2004 by Bhanu Chopra, RateGain has filed its DRHP for the IPO, which reveals the company’s key leaders

Bhanu Chopra, Megha Chopra, and Usha Chopra and investor Wagner will look to offload shares in the IPO

CEO Chopra had one of the highest compensation packages in the travel tech industry in FY21, as per the filings

Travel tech startup RateGain is all set to go for an initial public offering (IPO) and filed its draft red herring prospectus (DRHP) earlier this week.

Here’s a look at the key people leading RateGain as it ventures into the public market: 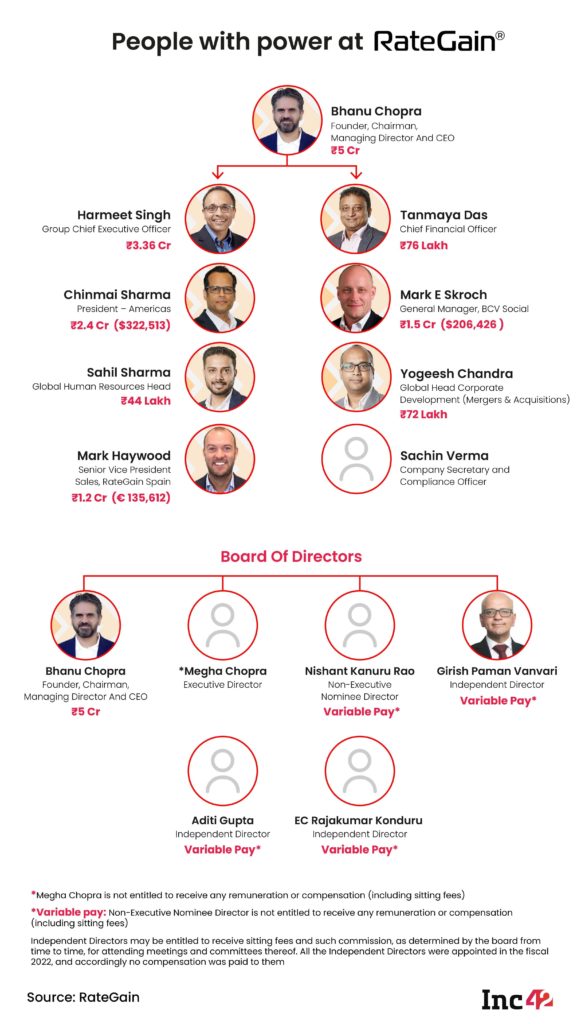 Bhanu Chopra is the chairman and managing director (effective from August 5, 2021) of RateGain. He graduated with a master’s in finance and computer science from Indiana University. He began his career as a senior consultant with Roundarch and then moved on to Deloitte in 1998 as a senior consultant.

Subsequently, he graduated to Riv Consulting as the CEO until he launched RateGain. Besides RateGain, Chopra is also the acting independent director at hospitality company RedDoorz and a member investor with Indian Angel Network.

In fiscal year 2021, he received a gross remuneration of INR 5 Cr. In mid-2020, with the onset of pandemic-induced lockdowns and the severe impact on the travel industry, RateGain was among the companies that cut costs through pay cuts, furloughs, and layoffs. However, within the travel tech sector, Chopra has one of the highest compensation packages. In addition to his base salary of INR 3.1 Cr, the CEO was entitled to bonus payouts which took his total compensation in the fiscal year 2021 to INR 5 Cr.

In contrast, online travel aggregator ixigo founders Aloke Bajpai and Rajnish Kumar took home a gross remuneration of INR 1.2 Cr for FY21, while EaseMyTrip founders Nishant Pitti and Rikant Pitti were paid INR 4.08 Cr and INR 3 Cr respectively for for the financial year that ended in March 2021, but both have reduced their compensation to INR 96 Lakh in FY22, as per the company’s filings.

Harmeet Singh has been associated with RateGain US — a subsidiary of RateGain India — since October 2019. He completed his bachelor’s in science from California State University, Northridge.

Before his stint at RateGain, he was the President of J2 Cloud Services. He is presently also a board member of US-based Attune Health and the executive partner for Madison Dearborn Partners, LLC. In FY2021, he received a gross remuneration of INR 3.36 Cr from RateGain US.

Tanmaya Das has been a part of RateGain since August 2015 and was appointed as the chief financial officer in June this year. He pursued his bachelor’s degree in commerce from Utkal University, Bhubaneswar. Before joining RateGain, Das worked for companies such as Dion Global Solutions, PwC, and Avaya Global Connect. He is also a member of the Institute of Chartered Accountants of India. He received a gross remuneration of INR 76 L in fiscal year 2021.

Earlier, he was the chief revenue officer of Taj Hotels and the vice president revenue of Starwood Capital Group. In fiscal year 2021, he received a gross remuneration of INR 2.4 Cr ($322,513).

RateGain acquired hospitality-focussed social media monitoring startup BCV Social in 2018. Skroch leads the BCV operations at RateGain now. He has a master’s in business administration from JL Kellogg School of Management, Chicago and has been with BCV Social since March 2020. Before his career with BCV, he was the senior vice president of accounts in Fusion92 and an associate partner at VSA Partners. He received a gross remuneration of INR 1.5 Cr ($206,426) from BCV Social in fiscal year 2021.

Yogesh Chandra was associated with the hospitality and travel business of RateGain IT Solutions since 2010 and with RateGain since March 2015. He completed his bachelor’s in commerce from University of Delhi. He also has a diploma in hotel management & catering technology from National Council for Hotel Management and Catering Technology, New Delhi. Before starting out at RateGain, he has worked with Taj Hotels, The Spencer on Byron Hotel, New Zealand and Kingsgate Hotel, Auckland. For the fiscal of 2021, he received a gross remuneration of INR 72 L.

Mark Haywood has been leading RateGain’s European business in Spain since April 2019. He completed his education from West Hatch High School Chigwell and the City and Guilds of London Institute. Prior to his career at RateGain, Haywood has worked with Bishopsgate and Zinc House and Ascott Limited. He was also the regional vice president Northern & Southern Europe for Travelclick. In fiscal year 2021, he received a gross remuneration of INR 1.2 Cr (135,612 euros) from RateGain Spain.

Sachin Verma has been with RateGain since June this year. He has an honours in commerce from University of Delhi and bachelor’s in law Chaudhary Charan Singh University, Meerut. Before starting his career at RateGain, Verma was the company secretary for Fair Exports (India) and has over five years of experience as a practising company secretary. He is also a member of the Institute of Company Secretaries of India.