Org Chart: The People With Power At IPO-Bound Ixigo

MakeMyTrip and Elevation Capital, which acquired 19.9% and 56.7% shares respectively of ixigo in 2011, have reportedly received an 8x return on their investment

In the DRHP filed to SEBI, the travel platform company aims to raise INR 1,600 Cr. In the pre-IPO funding round, the company raised $53 Mn and is reportedly targeting a valuation of $750-850 Mn.

Founded in 2007 by Aloke Bajpai and Rajnish Kumar, ixigo is a travel and ticketing platform for rail, air, bus travel, and hotel bookings. To date, the company has raised INR 180 Cr from 13 investors including GIC, Sequoia Capital India, Elevation Capital, Trifecta Capital, and others.

Here is a look at the key people leading ixigo as it ventures into the public market: 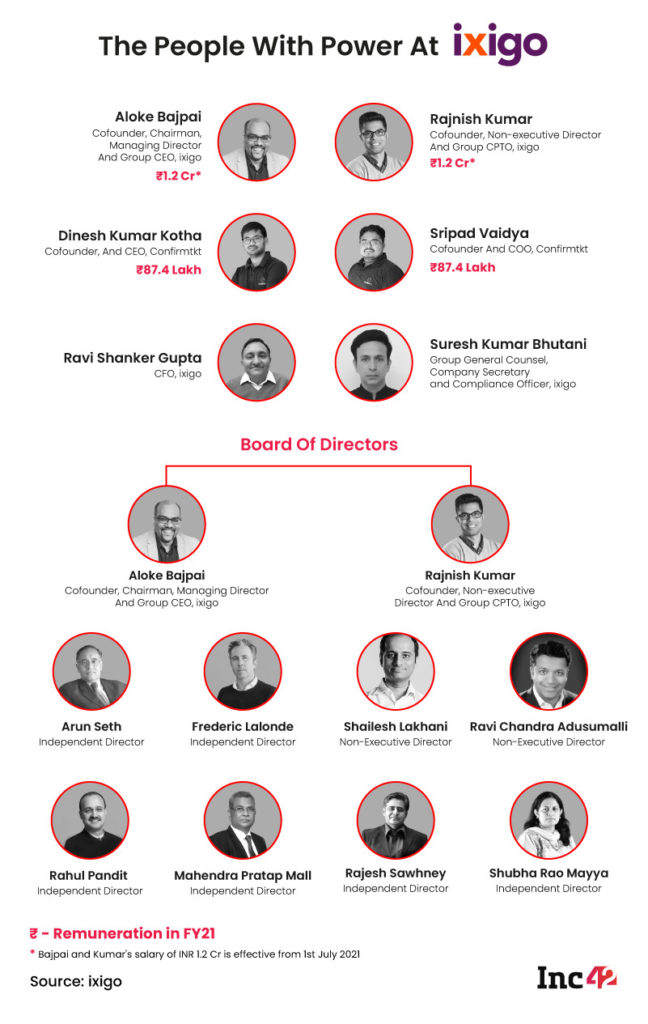 Aloke Bajpai has been a member of the board since 2006. He graduated with a bachelor’s in electrical engineering from the Indian Institute of Technology, Kanpur, and a Master’s in business administration from INSEAD. Prior to launching ixigo in 2007, he worked at Amadeus in France as a software development engineer and, subsequently, as a system and network engineer. He is a charter member of The IndUS Entrepreneurs (TiE).

Bajpai is also the advisor for accelerator and seed funding platform — GSF, food-tech startup — MealHopper, training marketplace — InstaEnroll, among others, and an investor in startups, like Autowale, bluegape.com, HackerEarth, and several others. Bajpai For the fiscal year of 2021, Bajpai received an aggregate compensation of INR 1.2 Cr.

Rajnish Kumar is the cofounder and has been on the board of ixigo since April 2010. He completed his bachelor’s in computer science and engineering from the Indian Institute of Technology, Kanpur. He is also the cofounder and CTO of ixigo subsidiary Travenues.

He has helped several startups bootstrap and invested in startups including MealHopper. He also worked at Amadeus in France as a software development engineer. Under his leadership, besides launching ixigo.com in India in 2007, the company also developed its mobile application, ‘ixigo-trains’. In FY 2021, he received a remuneration of INR 1.2 Cr.

Dinesh Kotha is the cofounder and was appointed as the CEO of Confirmtkt in February 2021, after ixigo acquired the startup. He completed his bachelor’s in electronics and communication engineering from the National Institute of Technology, Jamshedpur. Before his stint in Confirmtkt, he was part of o9 Solutions Management India. Kotha has been made the key managerial person (KMP) of ixigo in fiscal 2022. In 2021, he received a remuneration of INR 87.4 L.

Sripad Vaidya is the cofounder and was appointed the COO of Confirmtkt in February 2021. He holds a bachelor’s in computer science and engineering from Shanmugha Arts, Science, Technology and Research Academy, Sastra University. He has been the KMP of ixigo since fiscal 2022. During fiscal 2021, Vaidya received a remuneration of INR 87.4 L.

Ravi Shanker Gupta joined ixigo in April 2021. He has honours in commerce from the University of Delhi and is a member of the Institute of Chartered Accountants of India. He is also an associate member of the Institute of Company Secretaries of India and the Institute of Cost Accountants of India. He has over 27 years of experience in corporate finance, strategy and accounting. Before joining ixigo, he worked for various companies such as Larsen & Toubro, Hutchison Max Telecom, Jubilant Foodworks and Devyani Food Street. Currently, he oversees the accounts and finance departments at ixigo.

Suresh Kumar Bhutani started his stint at ixigo in April 2021. He graduated from the University of Delhi with a bachelor’s in law and his masters in business administration with a specialisation in financial management from Indira Gandhi National Open University, New Delhi. He is a member of Company Secretaries of India and the Chartered Governance Institute, UK and Ireland. He has over 15 years of experience in legal and secretarial matters and has worked with R Systems International, Interglobe Aviation, Ciena India, among others.