Org Chart: The People With Power At IPO-Bound OYO

Ritesh Agarwal, the second youngest billionaire in India, the founder and chairman of OYO received a remuneration of INR 1.63 Cr in FY2021

OYO’s Draft Red Herring Prospectus (DRHP) stated that the startup will issue fresh shares worth INR 7,000 Cr and an offer-for-sale — offloading of shares through the sale of shares from existing investors — worth INR 1,430 Cr.

OYO will be the fourth Indian travel and hospitality startup heading for an IPO. While EaseMyTrip got listed earlier this year, ixigo and RateGain have filed the DRHP.

According to its DRHP, 29% of the proceeds of the funds to repay part of the borrowing availed by its subsidiaries.

Founded in 2013 by Ritesh Aggarwal, the hospitality unicorn is backed by marquee investors such as Masayoshi Son’s SoftBank, NASDAQ-listed Airbnb, Lightspeed Venture Partners, Innoven Capital, among others. It has raised $4.1 Bn from 26 investors across 19 rounds, to date.

Here is a look at the Key Managerial Personnel (KMP) leading OYO as it ventures into the public market: 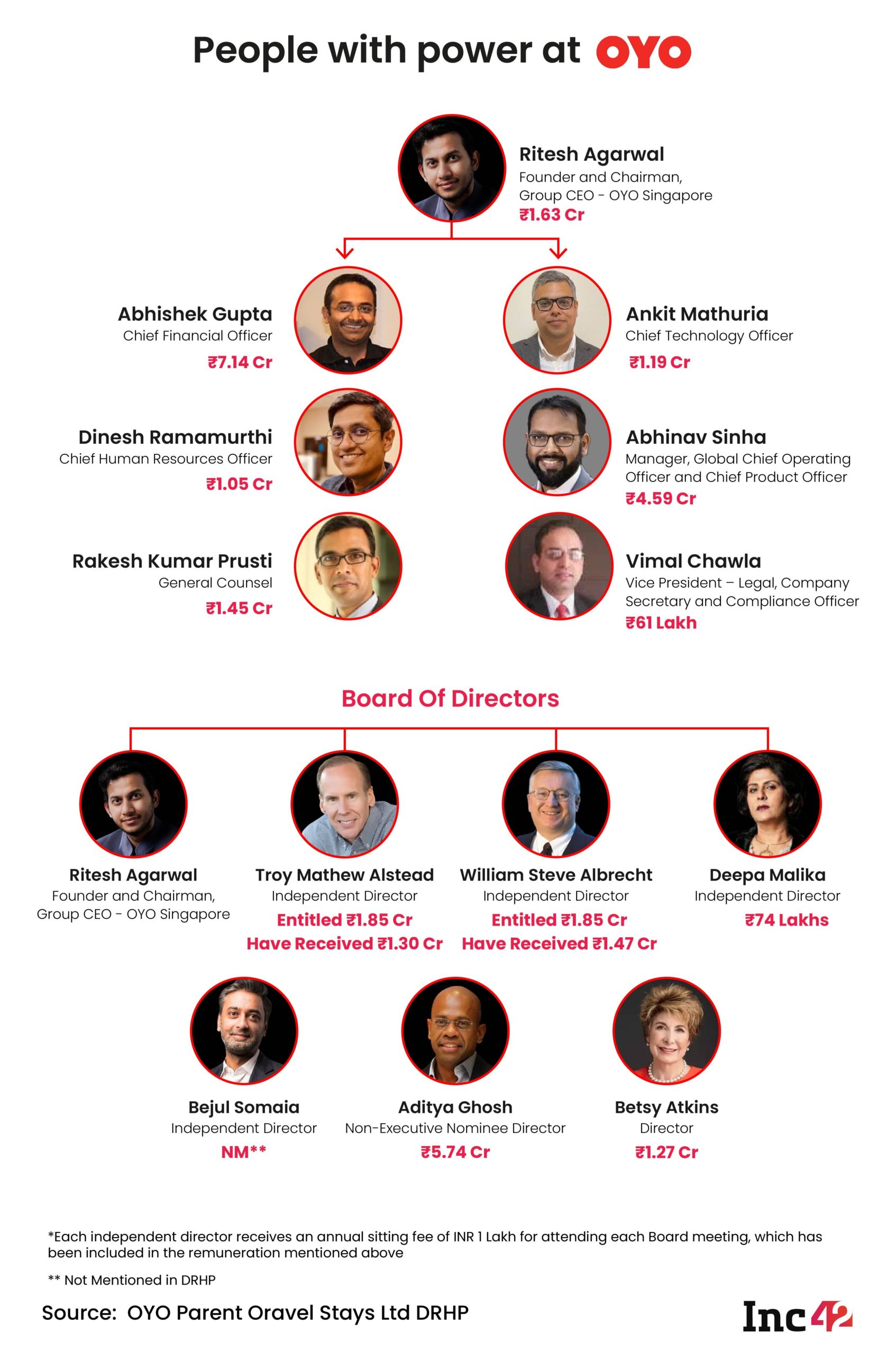 Ritesh Agarwal, the second youngest billionaire in India, is the founder and chairman at the hospitality unicorn. According to the terms of his employment, Agarwal is entitled to a gross remuneration, including perquisites from Oravel Stays is INR 1.06 Cr.

Further, from January 2021, his salary at OYO Singapore, as global CEO since 2019, was raised to INR 4.45 Cr, taking his annual remuneration to INR 55.1 Cr, but since the DRHP states that Oravel has not paid any remuneration from its cheque book, Agarwal, in addition to perquisites for subsistence such as accommodation, provision for vehicles, domestic help and others, was paid INR 1.63 Cr in FY21.

Abhishek Gupta joined OYO as the company’s CFO in 2015. Prior to this, he spent over two years at Philips India as CFO for the Home Lighting business division. Gupta has also worked with General Electric for over 9 years in several in-house segments across various financial roles.

A Chartered Accountant and an MBA from the Indian School of Business, Gupta was also a part of the Executive Management Program from Harvard University’s Division of Continuing Education. Until August 1, 2021, Gupta was based overseas, associated with OYO Hotels, Inc and took home a remuneration of INR 7.14 Cr in FY21.

Ankit Mathuria joined the hospitality startup in February 2021 as the CTO with OYO Technology & Hospitality FZ LLC. With an illustrative career of over 15 years in the technology field, Mathuria spent the last seven years at Amazon in multiple businesses, with the last one year as CTO for Souq — an Amazon subsidiary — in the Middle East and North Africa (MENA) region.

He has also worked with IBM and the Royal Bank of Scotland. For FY21, Mathuria, who is currently based out of Seattle, Washington, took home INR 1.19 Cr.

Dinesh Ramamurthi is the CHRO of OYO since 2016 has been responsible for driving learning, performance management and creating a positive work culture. An alumnus of the Tata Institute of Social Sciences with a degree in PM & IR, Ramamurthi has worked with ITC, Hewitt Associates, India, Bharti Airtel. Right before OYO, Dinesh was leading Compensation & Benefits in the APAC region for The Coca-Cola Company.

Ramamurthi received compensation of INR 1.05 Cr. He also holds a 4.45% stake in the company (as Trustee of Oravel Employee Welfare Trust).

Abhinav Sinha has been with the company since 2014, looking after operations at OYO as COO. He was later promoted as the Global COO and CPO in March 2021. He is also a Partner at OYO USA, driving the company’s growth in the region.

A chemical engineer from IIT Kharagpur and an MBA from Harvard, Sinha has more than a decade of experience working with product and services companies. Before OYO, he was a Principal with Boston Consulting Group in Dallas, US. Until April 2021, Sinha was based overseas, talking home INR 4.59 Cr in FY21.

He received a total remuneration of INR 1.45 Cr.

Vimal Chawla, a CS from the Indian Institute of Companies Secretary, has been a KMP of OYO since October 2019 where he was also given the responsibilities of the Company Secretary of OYO in September 2020.

Prior to OYO held the designation of associate vice president at One97 Communications Limited, vice president – legal & FCC with Canara, HSBC, Oriental Bank of Commerce and LIC. In FY21, he received total compensation of INR 61 Lakh from the hospitality startup.