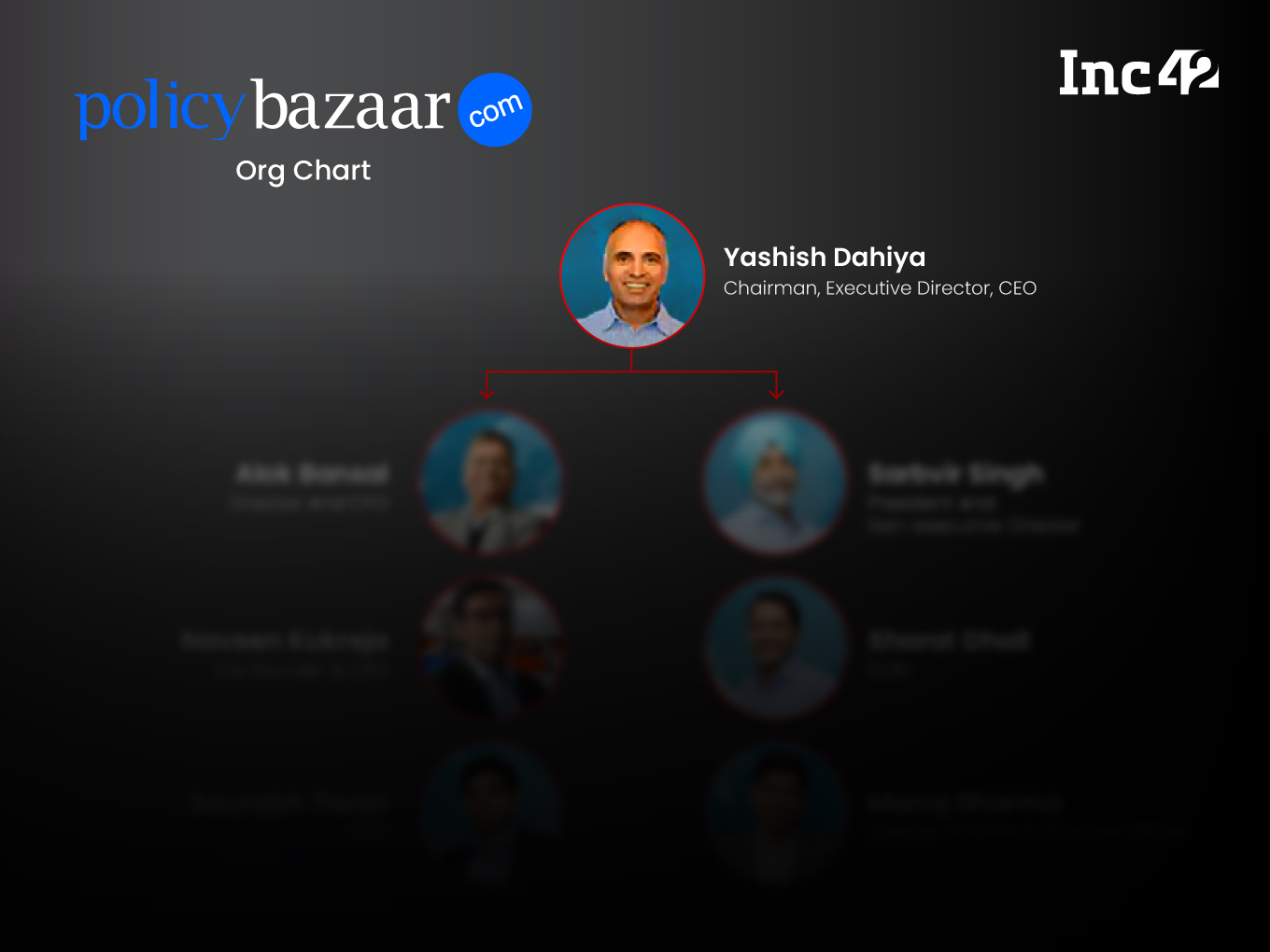 The startup is headed by chairman, executive director Yashish Dahiya with Alok Bansal as cofounder and CFO and Sarbvir Singh as the president and CEO

The company has filed its draft red herring prospectus (DRHP) and is looking to raise INR 6,017.50 Cr through an IPO at a valuation of $5.5 Bn-$6 Bn The offer will include a fresh issue of INR 3,750 Cr worth of equity shares and an offer-for-sale (OFS) of INR 2,267.50 Cr by existing shareholders and promoters, with SoftBank selling INR 1,875 Cr worth of shares. Up to INR 392.50 Cr by other investors and promoters, including cofounder and CEO Yashish Dahiya.

Founded by IIT Delhi and IIM Ahmedabad alumni Dahiya, Alok Bansal, and Avaneesh Nirjar in 2008, Policybazaar aggregates insurance policies from a range of providers for use-cases including life insurance, automobile insurance, health insurance and more. To date, it has raised more than $766 Mn from 22 investors including SoftBank, Temasek, Info Edge, among others.

However, Paisabazaar’s FY11 revenue took a hit due to the pandemic. While there was some recovery in the third and the fourth quarter of FY2021, the loan disbursals sold by lending partners on Paisabazaar platform decreased to INR 2916.8 Cr in FY21 from INR 6549.6 Cr in FY20.  The market conditions for lending startups are expected to improve in the coming months as businesses continue their financial recovery and consumers look for short term credit boosts in 2021 and early 2022.

Here’s a look at the key people leading Policybazaar and Paisabazaar as it ventures into the public markets. 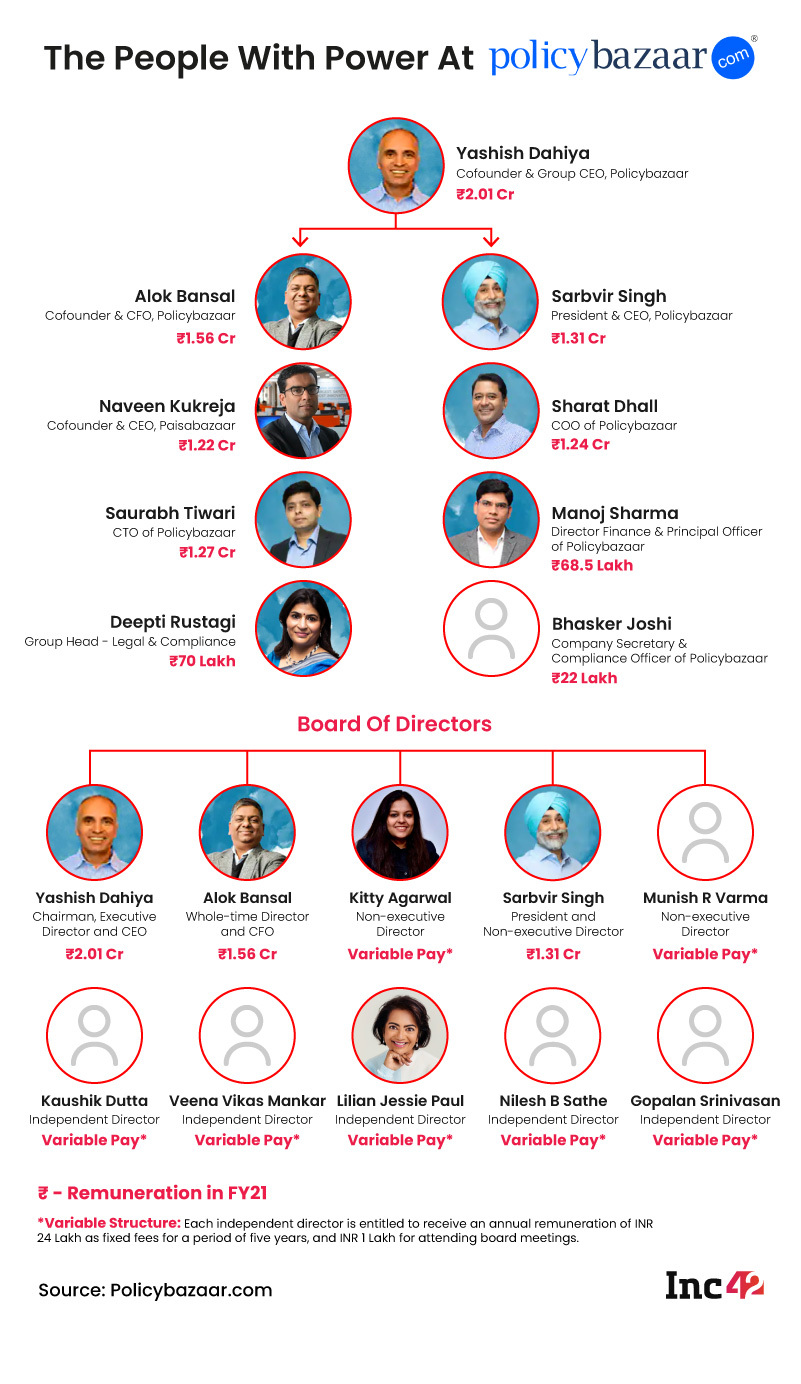 Yashish Dahiya is the chairman, executive director and chief executive officer of Policybazaar. He holds a bachelor’s degree in technology from Indian IIT- Delhi, a post-graduate diploma in management from IIM-Ahmedabad and a master’s degree in business administration from Institut Européen d’Administration des Affaires (INSEAD), France. He was earlier associated with ITW Signode India, Bain & Company, eBookers and CI2I Investments. In fiscal year 2021, he received an aggregate compensation of INR 2.01 Cr.

Alok Bansal is the chief finance officer at Policybazaar, as well as a whole-time director. He holds a bachelor’s degree in technology from Shri Shahu Ji Maharaj University, Kanpur and a post-graduate diploma in management from IIM-Calcutta. He was previously associated with Voltas, General Electric International Operations, iGate Global Solutions, Mahindra and Mahindra and FE Global Technology Services. In FY2021, he was paid INR 1.56 Cr as remuneration.

Sarbvir Singh is the president and a non-executive director at the company. He holds an integrated master’s degree in mathematics and computer applications from IIT-Delhi and a post-graduate diploma in management from IIM-Ahmedabad.  A former capital investor, Singh was appointed as the CEO of Policybazaar in February 2020. He has previously served as managing partner of WaterBridge Capital and Capital18, a part of the Network18 group. In FY2021, Singh received an aggregate compensation of INR 1.31 Cr from Policybazaar.

Naveen Kukreja is the cofounder and CEO of Paisabazaar, the lending aggregator run by the parent company. He joined Paisabazaar in April 2016. He holds a bachelor’s degree in engineering from University of Delhi and a post-graduate diploma in management from IIM-Calcutta. He was previously associated with Citibank India, Capital One (Europe) and Aviva Life Insurance. In FY2021, he received an aggregate compensation of INR 1.22 Cr.

Sharat Dhall is chief operating officer (COO) at Policybazaar. He has been associated with the fintech unicorn since November 2019. He holds a master of management studies degree from Birla Institute of Technology and Science, Pilani and a post-graduate diploma in business management from XLRI, Jamshedpur. He was previously associated with Hindustan Lever, Times Internet, and Yatra.

At present he also serves as an advisory council member of Oktober6 Insight Private Limited, India. In 2021, he received an aggregate compensation of INR 1.24 Cr from Policybazaar.

In his second stint at the company, Saurabh Tiwari leads the tech operations. He had worked with the startup from September 2010 till July 2016, before moving back to the company in 2019. Tiwari holds a bachelor’s degree of technology from IIT-Kanpur, a master’s degree in technology from National University of Singapore and has completed an executive programme in business management from IIM-Calcutta. He was previously associated with myMBSC.com, IBM India and GEP Solutions. In 2019, Tiwari founded Zphin, a digital transformation services company, which is also operated by PB Fintech. In FY2021, he received an aggregate compensation of INR 1.27 Cr from Policybazaar.

Manoj Sharma is the director of finance and principal officer of Policybazaar. Sharma joined the startup in August 2008 and holds a bachelor’s degree in commerce from Kurukshetra University. He has qualified as a chartered accountant and associate with the Insurance Institute of India. He was previously associated with Fiamm Minda Automotive, Ericsson India and FE Global Technology Services. In FY2021, Sharma received an aggregate compensation of INR 68.5 Lakh from Policybazaar.

Deepti Rustagi joined Policybazaar in February 2020. She holds a bachelor’s degree in commerce and a bachelor’s degree in law from University of Delhi and has qualified as a company secretary with the Institute of Company Secretaries of India. She was previously associated with Vaish Associates Advocates, Canara HSBC Oriental Bank of Commerce Life Insurance Company, Aviva Life Insurance and Apollo Munich Health Insurance where she served as senior vice president of legal, compliance and corporate affairs. In 2021, Rustagi received an aggregate compensation of INR 70 Lakh from Policybazaar.

Bhasker Joshi is the company secretary and compliance officer of Policybazaar.  He joined the company in 2017 and has been associated with Policybazaar on a full-time basis since April 2019. He holds a bachelor’s degree in commerce, and a bachelor’s degree in law from Kumaun University, Nainital. He was previously associated with A2Z Infraservices. In 2021, he received an aggregate compensation of  INR 22 Lakh from PB Fintech.