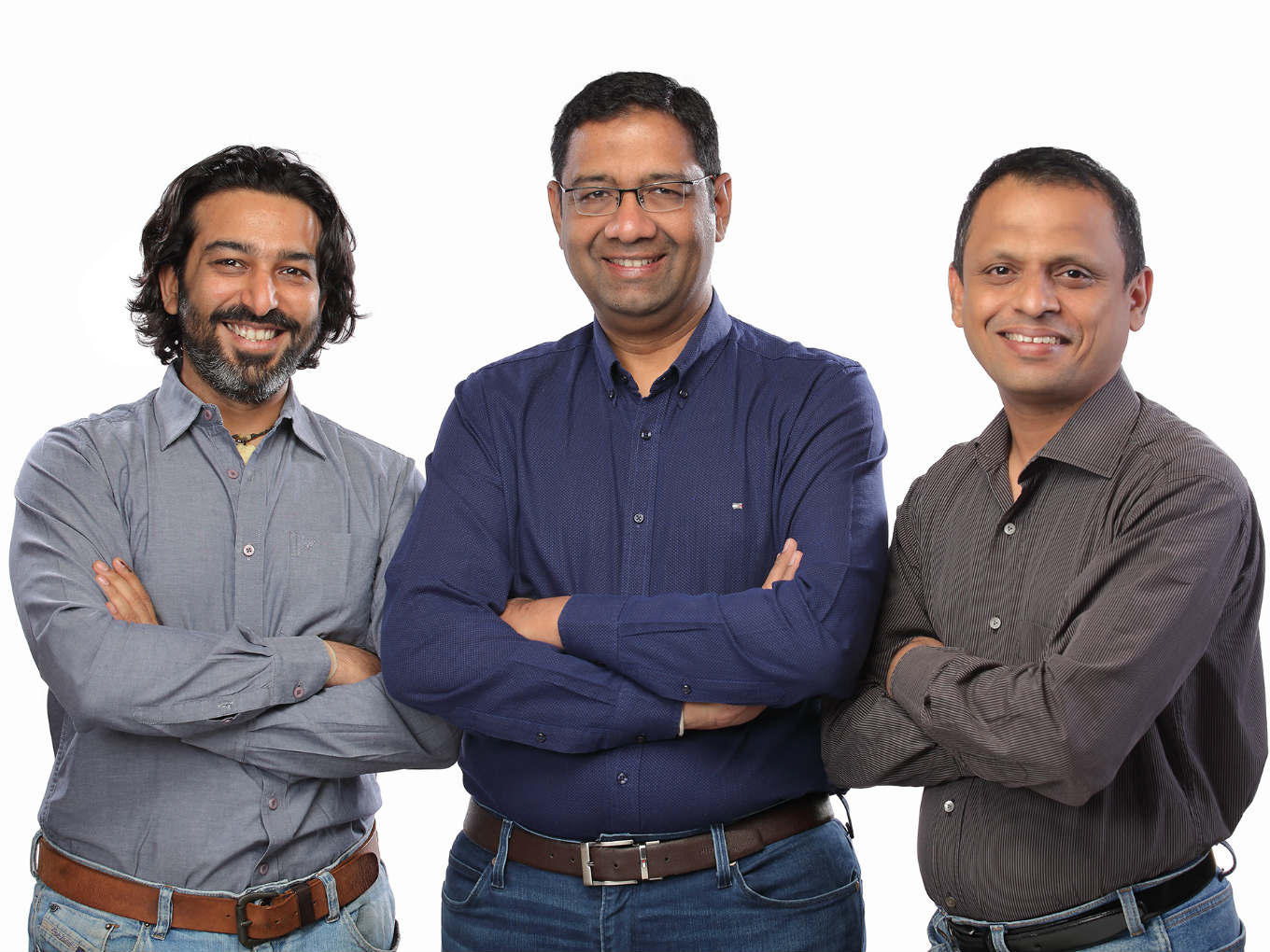 The startup ecosystem in India is going through a golden phase with high-quality entrepreneurs, solid businesses built around India-specific ideas, and the ever-growing interest from angels, institutional investors and venture capitalists. But many entrepreneurs in the country still believe, there’s no unique idea or innovative product that was born in India. Entrepreneur Vivek Saxena, for example, said the success stories and unicorns in India have largely based their models on international counterparts.

Saxena was deeply bothered by the fact that there’s no Indian original big idea such as Airbnb, Uber or even Amazon for that matter. He had founded payments platform Zipcash in 2007, but always wondered what was missing in India to create unique products, which Western markets, particularly Silicon Valley, seems to have an abundance of.

Saxena and his Zipcash colleague Navin Pai and Deepak Choithramani decided the way to change this is by rethinking how business ideas are seeded in the Indian ecosystem. With its strong reliance on accelerators and incubators, the Indian startup ecosystem had a clear gap for venture studios, which germinate the ideas internally.

The duo built their venture studio, Digicita, realising that India has the potential to build many industry-first audacious innovations. “Digicita was born of a realization that a stronger and longer nurturing framework was required to truly build many more successful innovation based businesses,” Saxena told Inc42.

The Mumbai-based venture studio is using design thinking principles to identify disruptive innovations and ideas, shape them, create a market-fit and fund them, first internally and then through external investors.

Digicita: Why Start A Startup Studio?

Digicita cofounder and CEO Saxena said the company identifies audacious, impactful ideas by applying the process of design thinking, nurturing them through the various stages to create both user desirability and technical feasibility that fill market gaps.

The key advantage of a venture studio is explained in this quote by Blenheim Chalcot, a venture builder in the UK. “The founding team of a startup, with the ambition to disrupt an industry, has three main things to worry about — raising money, looking after administration, and building the product. Working with a venture builder means the first two are largely taken care of, leaving the team to focus on rapidly building a valuable product and taking it to market,” Chalcot said.

Venture studios or startup studios have gained ground in Western markets and are slowly picking up pace in India thanks to the huge opportunity for entrepreneurs. Home to more than 49K startups, Indian startups have been supported by more than 250 accelerators and incubators which help them with mentorship, product viability, training and funding.

But unlike incubators or accelerators, where the idea belongs to the startup they support, venture studios own the individual businesses they create out of the  many ideas.They not only build the initial version of the product or service after coming up with the idea internally, but also provide the funding to hire employees and managers.

At any given time, a venture studio is working on multiple ideas, all of which could be viable for the market they are in. And unlike an accelerator or incubator, a venture studio has the full stake in the services and products it creates.

During the interaction, Saxena kept bringing back design thinking as a guiding principle for the venture studio. In simple terms, design thinking is a methodology that provides a solution-based approach to problems. Design thinking focuses directly on human needs at a given time, and comes up with effective solutions to meet those needs. It could be hardware, software or a service, but it has to fulfil a very specific need.

Bryan Lawson, a Professor of Architecture at the University of Sheffield, found that it’s an iterative process which favours experimentation until the right solution is found.

“India has an abundance of corporate talent that can take an idea from 20-100; its 0-20 that we focus on along with our entrepreneur-in-residence, who are all well experienced in building much larger businesses. The pedigree of our entrepreneurs lower the success risk inherent in every innovation,” Saxena said.

At Digicita, the ‘entrepreneur-in-residence’ leads a new business or idea and evolves it. They are responsible for identifying the market gap and turning the idea into a viable product. Along the way, the business lead can utilise a common pool of software engineers, managers and other resources.

Digicita gets its various businesses Series A ready, with the strategic guidance, mentoring, and funding through the early stages, coming from internal sources or networks. In the company’s case, a business goes from an idea to a product in typically about 18 months. Digicita’s internal development team of around 20 works on all its products.

After a business has grown beyond the beta stage, additional investors are brought in who not only provide funds, but are also more capable of guiding them in this stage in marketing and user growth.

With its first wave of products, Saxena and Digicita are focussing on ecommerce, communication, transportation and processes. He believes these are essentially the highest impact areas where disruptions are still possible.

He explained that Digicita’s ideas or startups are touching these three primary areas. Its first two products, Thinkly and Gizmojo are in pilot phase, while a third Smartify is in the beta stage.

Smartify is an IoT platform for connected communities that allows its members to communicate with each other without having to share phone numbers, ensuring privacy. The IOT framework enhances security by controlling access and conveniently acts as a communication hub for the connected devices.

Saxena also said that one of the products which will soon get to beta testing stage is a hybrid online-offline last mile payments platform for ecommerce. The other three innovations are expected to get into beta release stage sometime next year.

Challenges In The Venture Studio Business

As a player in the unfamiliar venture studio space, Digicita has its share of challenges, even though the model gives them more flexibility in terms of resource allocation.

Saxena told us that the first challenge was to articulate internally the ideas they want to pursue, and which ones they will not chase. “The next challenge was creating the right model to interest pedigreed, talented entrepreneurs to co-found our innovation ideas,” he added.

However, for Digicita, one advantage was being able to attract quite a few former corporate business heads as cofounders for the businesses they have launched.

“This gives Digicita ventures a huge advantage, especially for startups headed by first-time entrepreneurs. This model puts startups above the common teething issues to allow them to succeed or flame out fast depending on their actual ability to capture the addressable market,” Saxena said.

Currently, stalwarts such as Mahadev Bhosale, Tushar Majethia and Renuka Sagade, are among the cofounder and entrepreneurs-in-residence spearheading Digicita’s ventures.

Mahadev, who is a cofounder in Gizmojo, earlier led a billion dollar-plus business as Director at Ingram Micro, a global distribution leader. Sagade, also a Gizmojo cofounder, had earlier driven Raymond and Lavie’s ecommerce initiatives. Majethia, who is now the Smartify cofounder, had created the ICT infrastructure for Palava, known as India’s first integrated smart city.

Venture Studios In India And The Market Size

Data from Inc42 Datalabs shows that the country has more than 2K active startup investors, which is a big gap. To bridge this gap, venture studios can develop multiple products with their internal funding and set each up for success.

At present, India has a few venture studios which include T9L, SAP Startup studio, and Prototyze Venture Studio.

Talking to Inc42 earlier, Prototyze founder and entrepreneur Gaurav Jaswal said that a venture studio is for entrepreneurs who realise that they can’t start a venture themselves either because they’ve realised that they don’t have the spectrum of skills to make it possible alone, or because they can’t take the extreme risk of being at no salary and invest the kickstart capital themselves.

Jaswal also said that in India, companies such as Growth Story, Ant Farm, and Smile Group follow somewhat similar models but, awareness of such models is lower as compared to accelerators or incubators.

Another venture studio, SAP Startup Studio offers a 12-month programme with a range of services, including deep dive and technology mentoring on SAP technologies, co-innovating with SAP, and dedicated market access through the SAP customer ecosystem in India.

Established in 2014, venture studio T9L has a successful track record. It offers proven pooled resources to new businesses and has helped launch 19 companies including CrownIt, NirogStreet and Pluss.

Another player which was established in 2015 is Morph Ventures. It ideates and builds mobile and web businesses. The studio provides initial investment in the businesses, and is 100% operationally involved at all stages, including building teams as they scale.

On the global level, we have PayPal cofounder Max Levchin’s HVF Labs, Twitter cofounder Evan Williams’ Obvious Corp, former MySpace CEO Mike Jones’s Science Inc., serial entrepreneur John Borthwick’s Betaworks, and Vimeo cofounder Jake Lodwick’s Elepath. And of course there are plenty of other examples in the US and Europe.

In India, one of the biggest challenges for venture studios though, is attracting investors after its ventures are off the ground. This is the current challenge for Digicita too.

“We are very careful while accepting any funds into the parent or holding company level, primarily because we need to see a clear alignment of our investor’s long-term vision with ours to build audacious, truly disruptive innovations from out of India, not just make some quick returns,” Saxena said.

If we take a look at the ground reality of venture studio-born startups, the results are what one would call decent. While some ideas have gone down the drain even after the companies behind them had received funding, there are success stories creating trust in the model.

One example is T9L’s portfolio company Docquity. The private continual learning network, exclusively for doctors,has raised over $12.2 Mn from investors such as Genesia Ventures.

Another T9L venture CrownIt, a consumer data analytics platform for brands to connect with research agencies, has raised over $9.5 Mn from investors such as Accel.

A Prototyze portfolio startup Seynse has created a financial technology platform. It has raised funds from Airtel to innovate for a much wider audience (Airtel mobile users) and add to its product portfolio.

So there are a few ventures which have grown big. But these are just a few names out of hundreds, and Digicita’s success entirely hinges on whether its fresh products pass the market test in the next few months.