Moneyball: Parag Dhol of Inventus Capital Is Looking For Founders Who’ve ‘Lived & Breathed’ The Problem They Want To Solve

Moneyball: Parag Dhol of Inventus Capital Is Looking For Founders Who’ve ‘Lived & Breathed’ The Problem They Want To Solve Parag Dhol, MD of Inventus Capital Partners, has led investments in the likes RedBus and PolicyBazaar

Parag Dhol, managing director of Inventus Capital Partners, has seen all the seasons and colours of the Indian startup ecosystem. He speaks of a time when 90% of the investments made by venture capitalists were in companies servicing foreign clients — a scenario that many of us, especially Millennials, are likely to find surprising.

Dhol, a veteran in the Indian investment ecosystem, has been investing in Indian companies since his first gig with ICICI Venture, way back in 1993. The 90s saw rapid transformation of the Indian economy as a result of the reforms that were kickstarted in 1991, with the goal of making the economy more market and service-oriented and expanding the role of private and foreign investment.

Inventus Capital was set up in 2007 and has been actively involved with investing in startups both in Silicon Valley and in India. Till date, it has invested in 65 US-based companies and 26 Indian companies. Last month, it marked the first close if its $47.31 Mn (INR 325 Cr) India-focussed fund.

Dhol joined Inventus in 2008. He says Inventus Capital, which has invested in the likes of Redbus and PolicyBazaar, is not your typical, flashy VC firm. Capital efficiency and unit economics are the most important criteria for the VC firm while making investments.

Inventus is sector agnostic and invests across the board. Dhol has led investments in Avaz, a picture and text-based communication app for children; Funds India, an online investment platform; PolicyBazaar, an insurance comparison platform; Power2sme, a group buying site that provides inks, steel, paints, and chemicals for SMEs in India; online bus ticketing platform redBus, which was sold to Ibibo Group in 2013; Tricog; and Vizury, a marketing platform.

Dhol also reminisced about his days at IIT Delhi. He said he was one of the very few early risers while at college and that the habit has stayed with him since.

“On the night before an exam, I was shutting the window of my room, all set to go to bed at about 10:30-11:00 PM, when a friend passing by said, ‘Kal exam hai, saale. Fail ho jayega. (Tomorrow is the exam; you will fail if you sleep early)’… that’s how people were. Out of 100 (students), there were, maybe, only two morning people,” Dhol says, an unmistakable joy in his voice.

Here are excerpts of this week’s Moneyball with Parag Dhol, MD of Inventus Capital. 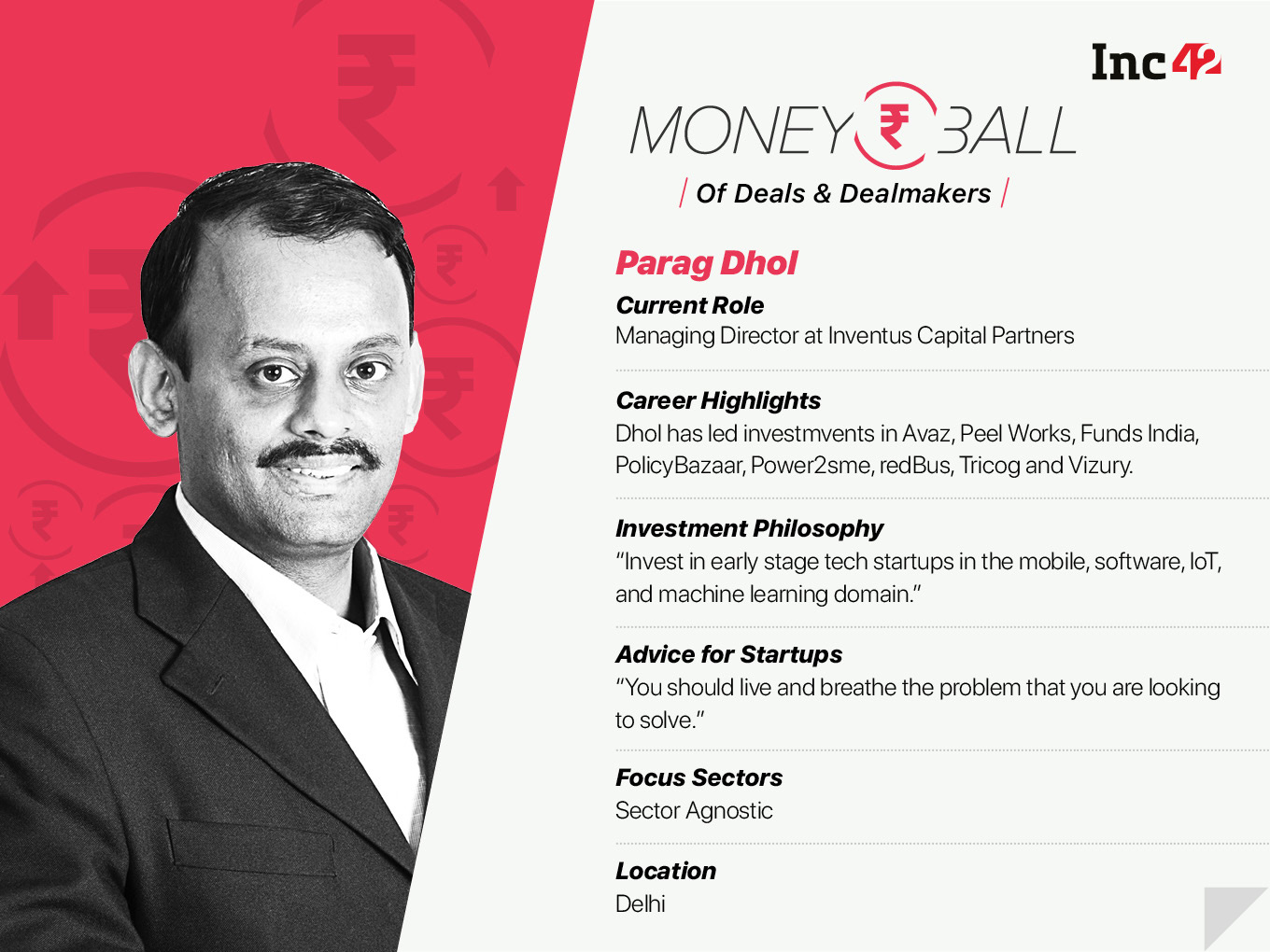 Inc42: You have been in this game since 1993. What are some of your key takeaways?

Parag Dhol: In the late 90s, what I saw were variations of service companies led by people who were in their 40s or 50s and were targeting the US as their primary market.

From 2005 onwards, people started to realise the potential of scaling through funding. We started seeing that B2C companies such as MakeMyTrip and BharatMatrimony could be funded and brought to scale.

People started investing in startups that were focussed on providing solutions for India. Earlier, 90% of the investments made by venture capitalists were in companies that were servicing foreign clients. But, by 2005, entrepreneurs also got younger and the digital environment in which they had grown up was reflected in the kind of companies that were being created.

Inc42: Why did you start investing in Silicon Valley and growing your roots there?

Parag Dhol:If you look back at India during the period 2006-2008, my future partners (at Inventus Capital) were conceptualising the India fund at a time when the country was not considered to be a very large market to be serviced.

Companies of today like Flipkart were not there. There was no demonstrable track record of success; there were only these service companies that were targeting western markets and had done so successfully. Companies that would focus solely on the domestic market were yet to arrive on the scene.

During that time, if you were raising funds from an LP (limited partnership) and you told them that it would be India specific… it would have been very difficult because the market was nascent and the B2B connection with Silicon Valley was strong. The thinking at the time was that these two markets were co-joined and India’s VC development would follow the US and there would be significant synergies in this bridge.

Today, although the synergies are there, the dynamics between both the markets have grown distinct and chances to scale domestically are also huge. The outlook from both the sides of the globe differ because Silicon Valley, at end of the day, is a very dynamic place and the scale is of a different order. Adjusting the fund strategy was getting suboptimal results from an investment perspective wherein the LPs we were pitching to wanted a clearer perspective of where they would be investing, whether in the US or in India.

One more thing that I would like to add here is that the companies that were based in the US also had teams or backend operations in India, but were largely US headquartered.

From the third fund onwards, we will be investing independently in India.

Inc42: Could you tell me about your investment thesis at Inventus Capital ?

Parag Dhol: We invest at the early stage in technology companies and the key focus is on funding great teams that are, for instance, in the Internet, mobile, software, IoT, or machine learning domains. Also, capital efficiency and unit economics for us are a important criteria when we get in, given that we are a small fund.

So, you will not see us investing in companies that take in $100 Mn to get to profitability; we are the guys who tend to focus on the likes of redBus and PolicyBazaar, who demand less and make optimal use of funds in their journey to profitability.

Inc42: Founders who were previously part of your portfolios — like Phanindra Sama of redBus — have invested in your latest fund. How does it feel?

Parag Dhol: That’s the ultimate endorsement isn’t it? It took a only 10-minute conversation with Phanindra to get him on board. We have three other founders — Ramesh Emani from our Fund I portfolio company Insta Health Solutions; Manu Parpia of Geometric Software, a company that I invested in while at ICICI Venture; and Naresh Ponnapa of Indecomm Global, in which Samir Kumar (co-founder and managing director at Inventus Capital) invested in while at Acer Technology Ventures.

It’s statement of how they trust and endorse us, which is really wonderful.

Parag Dhol: We don’t discriminate or split hairs about technology, we like to keep it broad. Having said that, we won’t do restaurants, we won’t do fast food, or fashion labels. Other than that, we are sector agnostic.

We are not thematic investors — I won’t be able to tell you the sectors where I will be investing. The things we are excited by are IoT (will do a lot of this), where India has an edge both in terms of hardware and software. We will also continue to invest in SaaS companies — a segment that continues to interest us.

Inc42: Any updates on your latest fund?

Parag Dhol: We are raising a $47 Mn (INR 325 Cr) fund, wherein SIDBI has committed to investing 25% (about INR 81 Cr) of the fund. Currently, we have commitments for $160 Mn from others — one-fourth of the commitment is from outside India, led by the US and the rest are from India. The way SIDBI’s commitment work is that for every three rupees that we have, they put in one rupee; so, we have till now closed about $200 Mn till now.

The fund is being raised as a alternative investment fund under Category 1 of Sebi’s guidelines, in which 75% of that capital has to be invested in India.

Inc42: How much money do you put in (while investing) and for how much stake?

Inc42: There are reports that SIDBI funds don’t really reach startups because of under-utilisation and slow pace of disbursement. Your views?

Parag Dhol: Our experience has been extremely positive one, our track record is good and we are not the flashy types, and they have been nice to deal with. They (SIDBI) have limited flexibility at times, which, if we were to be on the other side, would be practical about. But, leaving that aside, it has been a nice experience dealing with them. I am not saying this because they have given us money, they can make a real difference to the VC scenario in India.

Inc42: What according to you can be done better?

Parag Dhol: Money management is a fiduciary business and for the long term. Fund management is a 10-year game and it’s actually a 20-25 year commitment. There should be checks and balances in business. Most believe we live a sexy life and say no 100 times.

It’s actually a gut-wrenching business when you are on five boards and four of them are hurting for whatever reason — this profession can be very unforgiving.

Yes, the industry is nascent and you should be funding people not only with track record but with promise as well, but not everyone passing through.

Parag Dhol: Value systems should match. We are looking for people who are thinking long-term, who delay gratification, and are frugal. People who are not looking at us to pay the EMI of their big house or big car.

We prefer those who have gotten into the business because they have lived and breathed the problem that they are looking to solve and are eager to change the life of their customers.

Parag Dhol: You are in the VC business and you are judging people, so you develop a interest in psychology and behavioural science. It helps access candidates. The softer part of the conversation has become as important as the number-related part. It’s a six-seven year marriage at the very least, and thus softer parts are also very important.

This article is part of Inc42’s MoneyBall series in which we bring you up close and personal with the pioneers of the investment world. Dive in to find out about what excites them, their views on the latest technology and investment trends, and what the future looks like from their viewpoint! Explore more stories here.