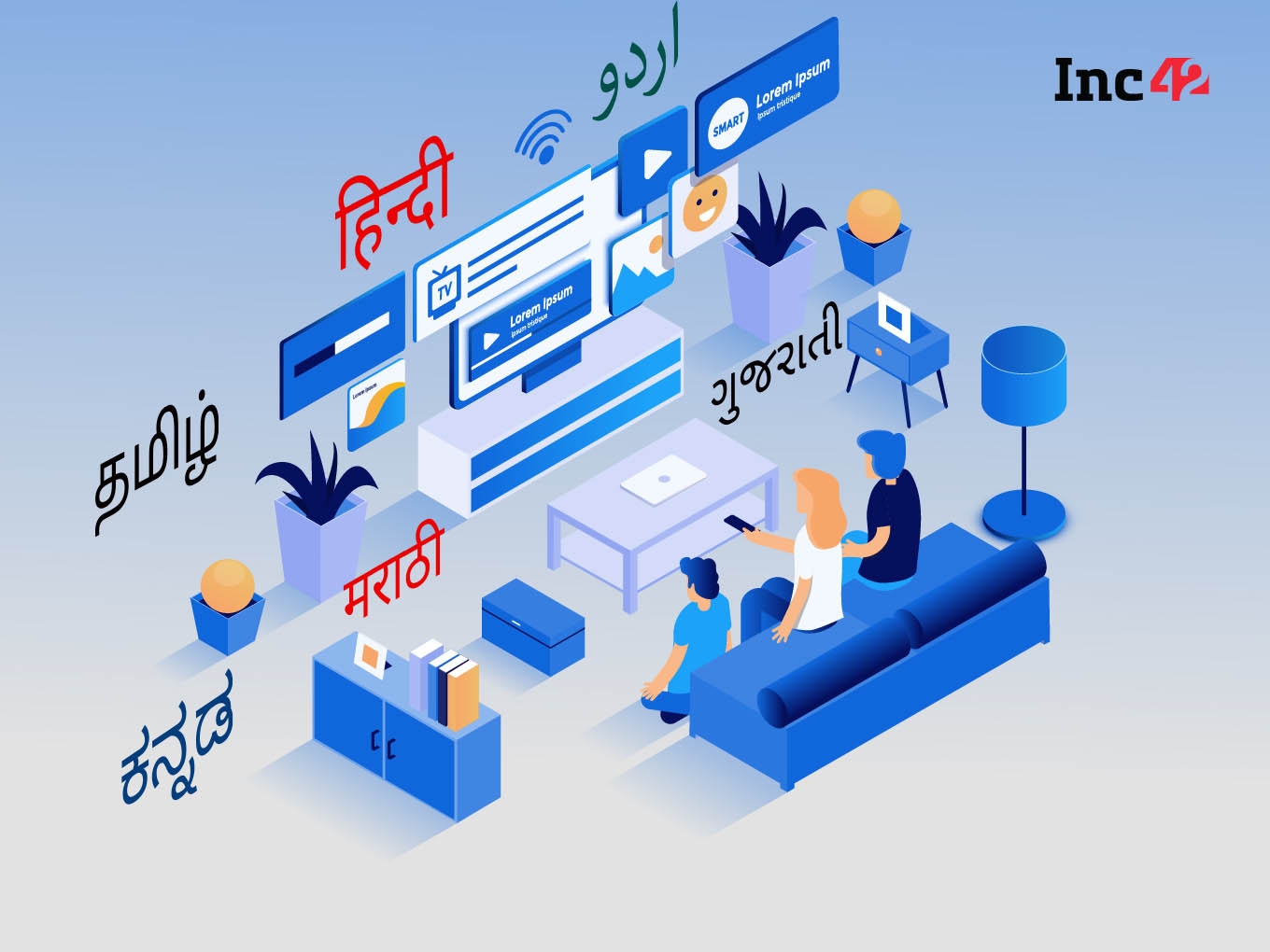 As of today, 30% of Indians consume video streaming content in their preferred language

Tamil, Telugu, Marathi and Bengali are the most preferred languages after Hindi

Vernacular content is the latest gold rush in the Indian tech startup ecosystem. Whether it is regional language content or Indian language movies, TV shows and podcasts, there’s no doubt that the huge section of the Indian population that doesn’t use English primarily is a mega-market – larger than most countries even.

According to the 2001 census, India has accepted 23 languages (including English) as part of the Eighth Schedule to the Constitution of India. Psychologists believe emotional “thinking” is an individual’s true first language which needs his mother tongue to express further. Perhaps this is the reason India has a wide landscape of players offering regional content since ages. 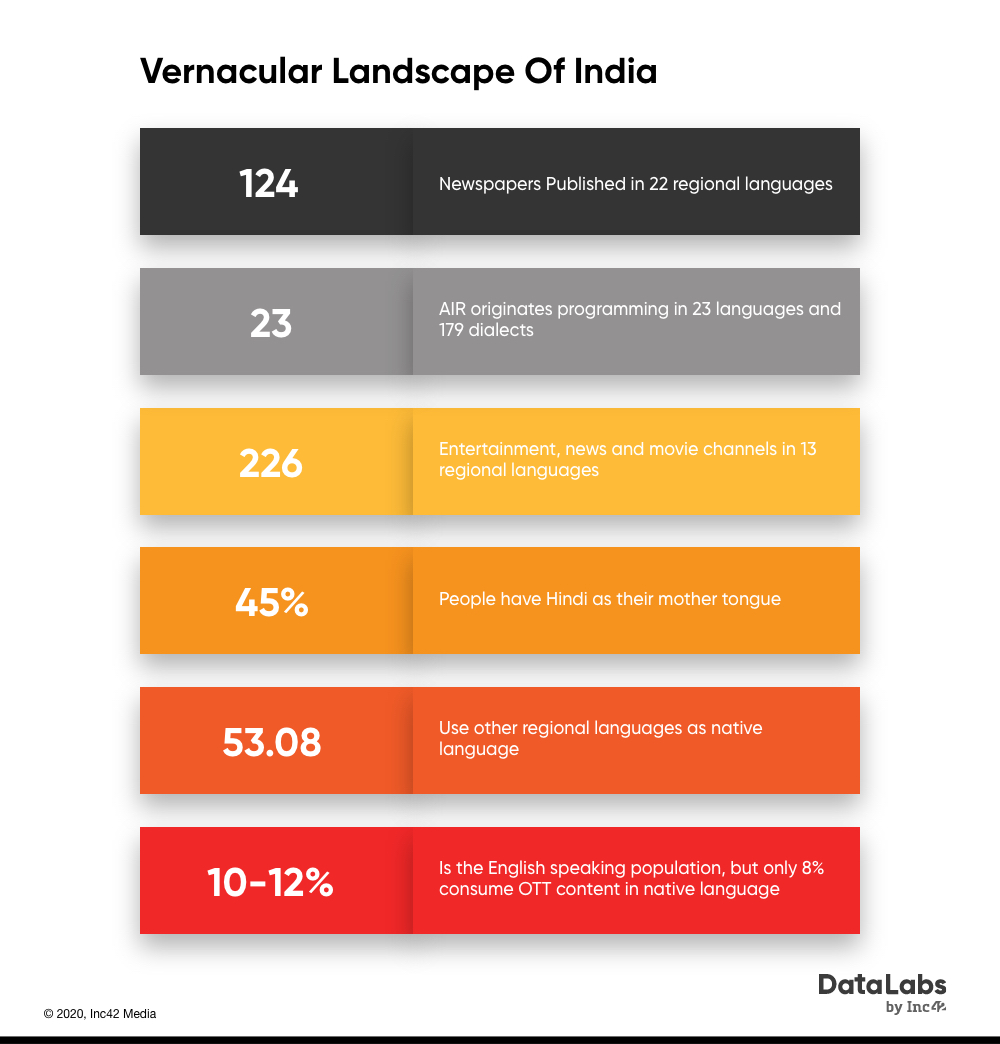 The massive 68.64% of India’s 1.3 Bn population living in rural and semi-urban areas and consuming content primarily in native languages has become the quest for the Indian companies, particularly for the broadcasting, media and entertainment industry.

That said, when it comes to video streaming, platforms adopting regional languages in addition to Hindi and English was expected and seen as a natural progression. As of today, 30% of Indians consume content on OTT in their preferred language which is other than English and Hindi, according to the latest KPMG study.

There are currently over 35 OTT video streaming players in India, of which over 30 players offer some content in regional languages. Since BSNL TV and Apple+ TV have only recently launched in India, while Disney+ is yet to officially launch in India, so we have chosen to not include them in our analysis.

There are telcos and DTH players like Tata Sky Binge, Vodafone Play and Jio Cinema, which is offering regional content in partnership with other OTT players. For instance:

Apart from the rising rural internet user base (251 Mn in March 2019), the rise in the number of regional OTT video streaming players is due to many factors. According to a KPMG report, the digital consumer in 2030 will be non-English speaking, from a developed rural/non-metro urban setting and willing to pay for content online.

This population will primarily be from the class of digitally sophisticated users, which are expected to reach 75 Mn from the current 18 Mn. Digital mainstream users consuming content in regional languages will further increase to 410 Mn, influencing the business models and distribution channel spectrum for the players, as per a Zee5 white paper accessed by Inc42.

Bengali Is The Most-Preferred Regional Language

Tamil, Telugu, Marathi and Bengali are the most-preferred languages among the OTT video streaming players, after Hindi of course.

Here are some other insights:

Subscriptions Not Heavy On The Pocket

While most industries are still looking crack the business model matrix for the price-sensitive Indian audience, Indian OTT players are determined to play on the subscription-based model. More than 20 players offer either subscription-based video-on-demand (SVOD) or freemium content and only five have an advertisement-based monetisation model. 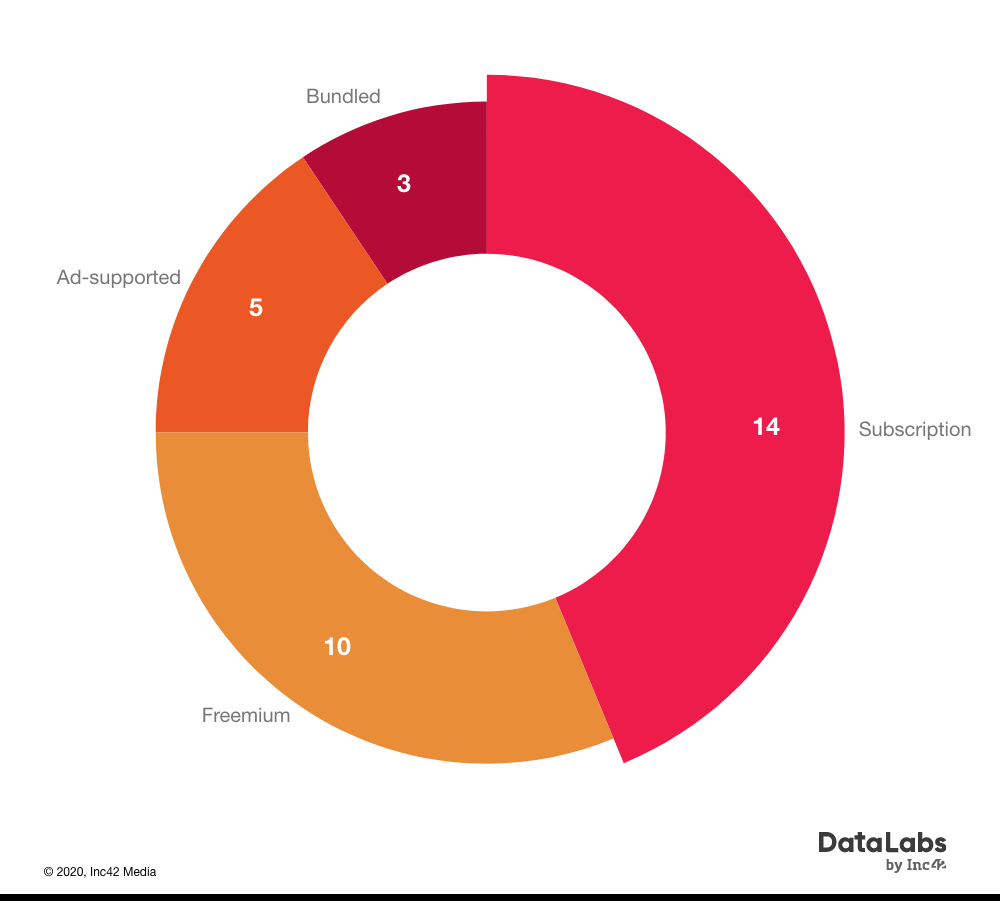 This clearly indicates a belief among the leading players that quality content in the right language might convince Indian consumers to pay a subscription fee. Video streaming platforms are also experimenting with price plans and content genres so that the cost is not a burden on the core target audience.

The primary content for around 26 regional OTT video streaming players operational in India is full-length feature movies. TV shows are the next most popular, followed by originals and web series.

Here are a few key insights:

Distribution And Originals Will Be The Key To Success

An effective distribution strategy whether it’s through the own platform or in partnership with other OTT players, as well as telcos and DTH, is crucial when it comes to regional content. For instance, states in southern India have the highest affinity towards their regional languages and most players out there are even producing high-quality originals in Tamil, Telugu, Malayalam and Kannada.

While dubbing and offering subtitles is an option explored by many players, core language platforms like Manorama Max (Malayalam) and Hoichoi (Bengali) are highly popular among the native audience. Partnering with such platforms to showcase their content on other platforms is seen as an effective strategy to acquire more users. The same is being done by regional content aggregators and we expect more players to follow suit.

Also, there is no doubt that Originals will be the king of content in future. Most players have already started building their library of original content as can be seen from the number of languages they are supporting.

According to a Google-KPMG Report, the Indian regional language user base is likely to grow to 536 Mn by 2021, compared to the number of English-speaking internet users in India which is expected to grow to 199 Mn in the same period.

Considering this, while the war between bigger local and international players will be played on deep pockets, for the smaller regional video streaming players language and locally produced content will be the key to scale further. Nevertheless, regional will certainly be a market to embrace for all and will prove to be a never-ending territory for the OTT video streaming players in India.