VCs Can Bring Much More To The Table For Startups Than Just Capital: K Vaitheeswaran

VCs Can Bring Much More To The Table For Startups Than Just Capital: K Vaitheeswaran 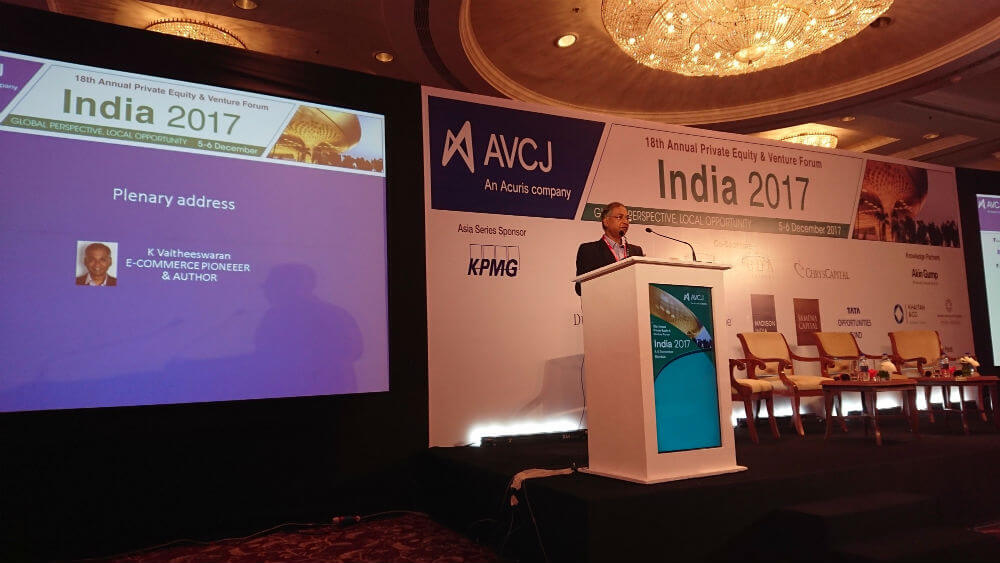 80% Of Capital That Has Flown Into India Is Impatient Capital, Said Vaitheeswaran

Vaitheeswaran, widely hailed as the father of Indian ecommerce having founded the country’s first pure-play online retail company Indiaplaza.com in 1999, stressed upon the fact that VCs can help entrepreneurs with much more than just bringing capital to the table.

K Vaitheeswaran was speaking to an august gathering of private equity investors, VCs, corporate financiers, risk insurance carriers and brokers, investment banks, management consultants, accounting firms and due diligence providers at the 18th annual AVCJ India Forum. Vaitheeswaran stated, “As the startup ecosystem matures, VCs play a very important role. At a primary level, they bring in capital which allows ventures to scale. But in my view, they bring something more important to the table. And that’s their ability to have a global perspective having dealt with businesses and startups worldwide.”

He further added, “I have a feeling that in India, the second one has been less valued than the first. I think the entrepreneurs are to blame because they are so hung up about raising money, I am not sure they work well enough with the VCs to get values from the VC on the second count.”

He believes that it’s more important that entrepreneurs extract more value from VCs beyond the capital. There is so much knowledge lying on the table but mostly entrepreneurs are happy taking just the money.

To make this far more valuable and useful, he said that the VC and investor community needs to step up and tell the entrepreneurs that there is a lot more available beyond the money.

The Exit Scenario In Indian Markets

While the Indian market continues to be attractive to investors, Vaitheeswaran noted that it has not been able to deliver a value in terms of exits despite the potentially large size, as the Indian market is extremely value-conscious.

“What this means is it is not possible to just keep investing in a series of ventures in India that are not organic or sustainable and primarily guzzling cash. It’s difficult for VCs to get exits and financial returns they are focussing on from such cash guzzling ventures,” Vaitheeswaran said.

“It’s not that exits won’t happen, they do happen and they are happening. I am not sure you are happy with them. While a lot of money has come in India as way of investment over the last decades, lesser amount has gone out as return,” he pointed out.

Keeping this background in mind, the ecommerce and Internet industry veteran suggested a couple of measures to help both the entrepreneurs on one side and the VCs on the other side to extract higher value for the entire ecosystem to benefit.

His first suggestion is that it’s important for India and Indian entrepreneurs to solve Indian problems. Vaitheeswaran noted that most of the focus has so far been on replicating businesses and startups that have grown up in other parts of the world.

“While it has glamorous potential, it will not create the value that we need. So the VC community should look beyond technology and pedigree as a qualifying factor for startups. True entrepreneurship value in India will get created when Indian entrepreneurs beyond the few colleges, and outside the purview of technology, go out and solve genuine Indian problems,” he said.

He further added, “So VCs have to play an important role to make sure that there is enough support for people who necessarily don’t make the pedigreed background.”

He also urged the Indian startup ecosystem to have patience. It needs money certainly but it also needs patience for entrepreneurs to delve deep into local Indian problems and create solutions that deliver value to the customer. And that’s not going to happen in the four to seven year exit period of VCs.

“I understand that it is a boxed condition that and the money needs to get returned but it is a very important point. Because if all VC investments are driven by an exit time frame which is very short to solve big large Indian problems, then the tendency is always to replicate what works in other parts of the world. And sooner or later, we will be back to the same cycle of not getting enough exits,” he explained.

Hence he reasoned that while there is a boxed condition of returns, VCs need to bring in a little bit more patience. 80% of capital inflow in India is impatient capital and that in turn creates its own sense of artificial urgency in the system.

Most entrepreneurs are young, fresh out of colleges, who do not have the experience to scale business. So VCs have to explain to them that money is available but for growth, not for funding large operational losses.

Vaitheeswaran believes that VCs should help entrepreneurs understand the difference between inorganic unsustainable ventures which primarily guzzle cash and organic sustainable ventures. This is because if large sums of money go into funding operational losses, and money gets sucked into system paying for losses, there is no way one can build a sustainable venture.

“It will then lead back to the same questions haunting the VC community-where are the returns, where are the exits? Explain to them money is available for funding growth, not losses,” he remarked.

He also stated that VCs should be able to create that trust factor and help them grow their businesses in a manner that makes sense rather than simply dealing on a transactional basis.

“VCs will obviously gain from this, the entrepreneurs will gain from it, but more importantly India will gain from it. Because we might get less in terms of number of businesses created but more in terms of pure value created. Over the last two years, the startup ecosystem has grown but VCs need to work with entrepreneurs to ensure that rather than just creating more ventures, honest, sustainable, solid, and profitable businesses are created.”

Interestingly, both the attractiveness of the Indian market and startup ecosystem and the fewer instances of exits for investors and VCs were recurring themes at the AVCJ Forum. Like K Vaitheeswaran, most speakers agreed that the India growth story was intact even after the twin shocks of demonetisation and GST. Thus, there is reason to believe that the country is a sustainable attractive destination for investors. Yet they concluded that while the exit scenario is looking up in the last two years, the number of exits in the Indian markets still needed to match up to other countries like China and the US.