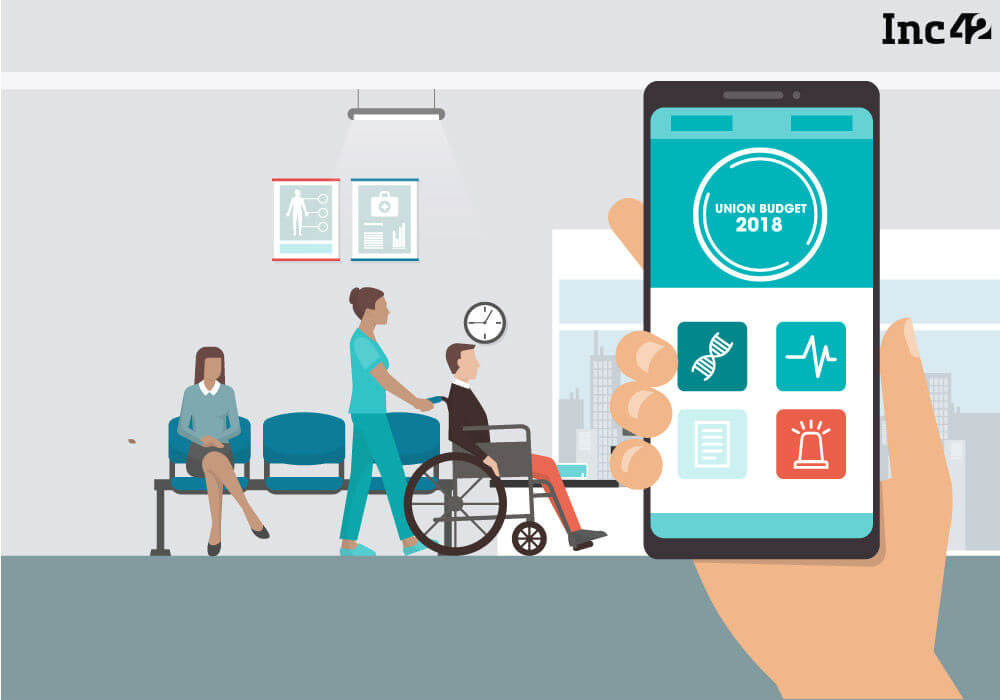 Announcing the world’s biggest healthcare scheme, National Health Protection Scheme, that will benefit 10 Cr people in the country, Finance Minister Arun Jaitley in today’s budget 2018 also announced a string of other allied initiatives such as blockchain, AI and ML push that are bound to help encourage healthcare startups.

“Only Swasth Bharat Can Be A Samriddha Bharat.” This statement coming from the Finance Minister in itself suggested how keen the government is on improving the current health of the country’s healthtech ecosystem. 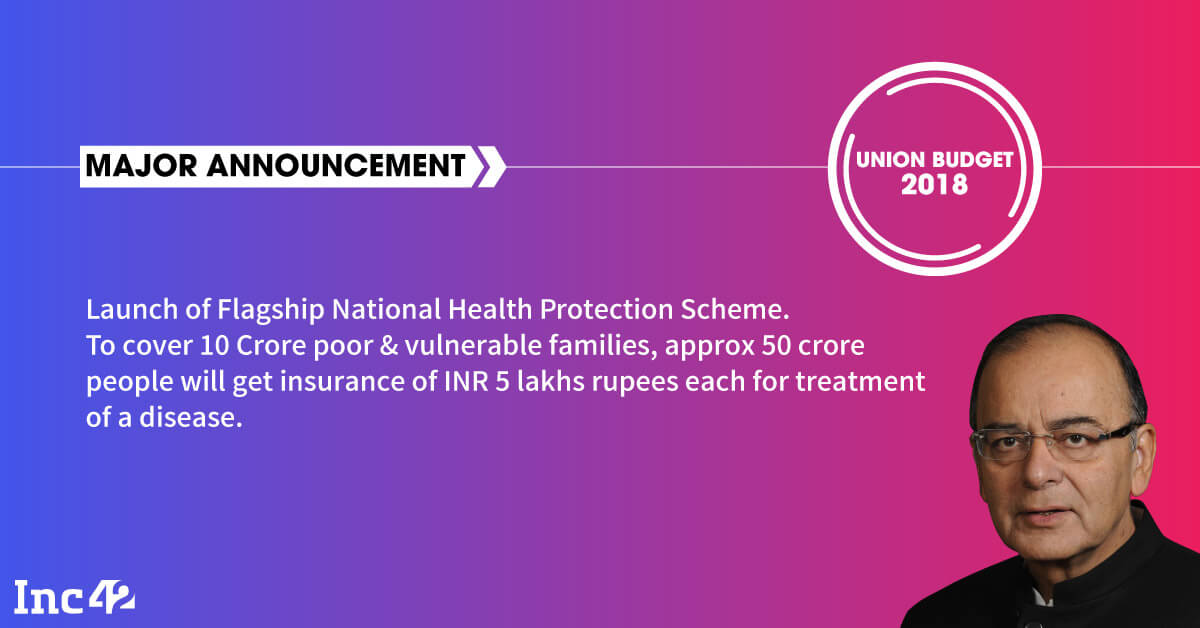 Although, the budget 2018, did not indicate any direct benefit to the healthtech startups, still the startup community is happy with the focus being given to the adoption of technology and the overall healthcare ecosystem.

As Mahavir Chopra, Director, Health, Life and Strategic Initiatives, Coverfox.com stated,  “The Finance Minister’s reinforced thrust on Digital India through measures like Wi-Fi hotspots in rural areas will significantly increase internet penetration and will help online healthtech startups to reach the rural areas, which so far can cater to the urban needs majorly.”

Sharing his sentiments,  Saurabh Srivastava, co-founder and Director, IAN along with being co-founder, NASSCOM added,“The proposal on universal healthcare is ambitious and can be transformational. Further, setting up a focus on AI is a forward-looking step as it will lead to policy frameworks that will allow us to leverage AI for good in areas like healthcare and education.”

In the past few months, the Indian startups have expressed a number of expectations from the Union Budget 2018. A few major issues that almost the entire community of healthtech startups suggested were lack of infrastructure, clear guidelines for new emerging sectors such as telemedicine, relook on GST and affordable healthcare for all amongst others.

As Prashant Tandon, founder of 1mg indicated, from an overall perspective, the biggest news in the budget 2018 was around healthcare with the launch of the National Health Protection Scheme. However, he believes that the devil is in the detail and the Govt must involve young technology players to contribute:

“The Budget showed a broad intent, but I hope the detailed implementation is well thought through. Else, we will end up throwing money and scaling up a flawed model. I am in general optimistic that this will throw up great opportunities for health tech companies to contribute and help deploy more efficient models, but would really wait for the govt to showcase its plan to make this happen and would hope the government involves the startup sector in developing on the roadmap.”

“It remains to be seen how the setting up of a National Health Protection Scheme, the world’s largest government-funded universal healthcare programme, will take off. If implemented in the right manner, it can prove to be a big enabler for healthy and like-minded organisations.”

Going a step ahead, Lybrate CEO Saurabh Arora welcomed the Government’s push towards digital initiatives and believes that the health sector, in particular, stands to gain a lot from such initiatives.

He further added, “For healthtech startups, the idea of initiating a national programme that will direct efforts in the area of artificial intelligence, machine learning including research and development of applications is very encouraging. Apart from this, the announcement of setting up of 24 government medical colleges will somewhat address the skewed doctor-patient ratio in the country.”

Satish Kannan, CEO and co-founder DocsApp also said, “Digital healthcare solutions help to minimise infrastructure costs, they’re the most effective way to ensure delivery of world-class healthcare in the underserved parts of the country. The boost given to telecom infrastructure and the move to establish Wi-Fi centres is a clear indicator of the shift from offline to online facilities. Every service, from healthcare to education, will be easily accessible to the people of the country.” 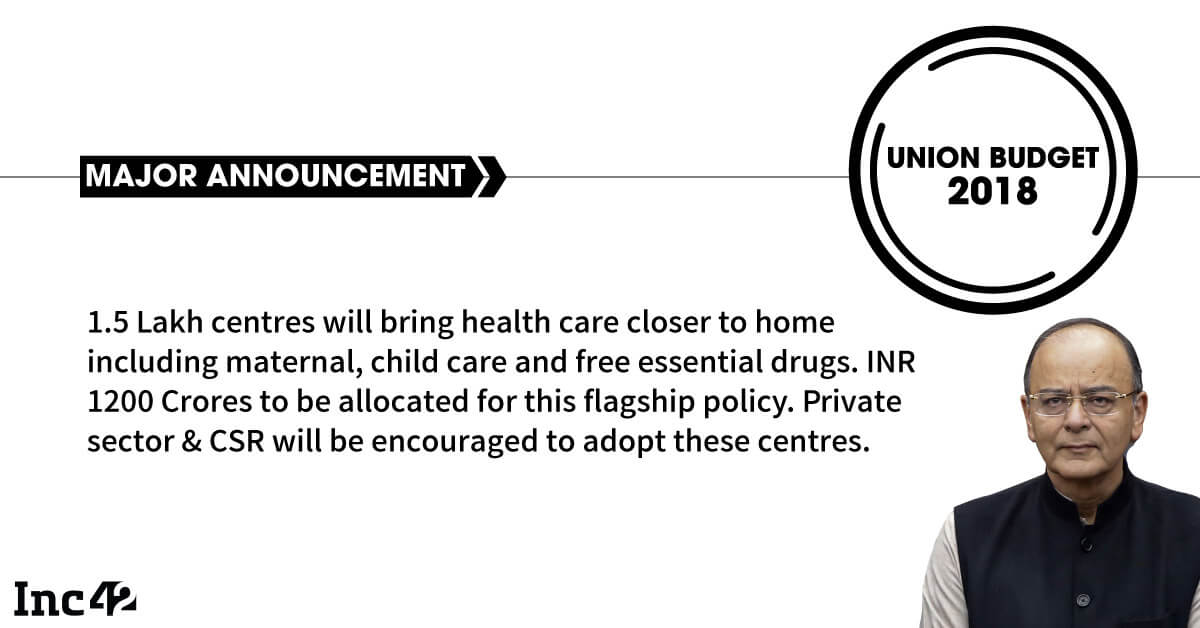 Ambiguities Regarding Tax and Subsidies Continues

A major disappointment in the current Union budget 2018 is the fact that there are ambiguities in the tax regimen for healthcare providers with GST exemption restricted to certain sections.

As Dr Anand Lakshman, Founder, and CEO, AddressHealth, added while healthcare institutions, doctors, and medical service providers are exempt from the GST mandate, there seems to be no such respite for startups and organisations working on preventive healthcare and education.

“What would fall under exemptions in the healthcare segment needs to be revisited,” he added.

Another area of concern was facilities for the private sector, however, this area also remained untouched in the current budget 2018. On the business front, unfortunately, there has been no special mention of health-tech startups in general.

Private healthcare sector should have been provided subsidy and exemption from GST to facilitate the greater spread of business and enable government’s push to make healthcare accessible to all.

“Furthermore, on one hand, the government is talking about going digital, however, it has not supplemented the act by connecting the digital drive with certain sectors such as healthcare and education which serve to be the backbone for the upliftment and well being of the society as a whole,” said Ravi Virmani, CEO and Founder, Credihealth.

Faizan Aziz, co-founder and CEO, Myra Medicines claimed, “As far as e-pharmas go, the biggest topic for discussion has been the lack of guidelines and regulations governing this space. Although the budget was not meant to directly address this issue, but given the investment the government is making in the health sector, we expect more clarity from the regulators.”

Touched Upon The Issue Of Skewed Doctor: Patient Ratio

Jaitley also touched on the much-needed issue of the requirement of doctors in the country while presenting budget 2018. Amid a population of over 1.3 Bn, the 1: 1,700 doctor to patient ratio in the country is extremely poor in comparison to the prescribed ratio of 1:400 by WHO.

So, the government will be setting up 24 new ‘Government Medical Colleges and Hospitals’ by upgrading the existing district hospitals in the country. This will fill up the deficit for doctors in the coming time.

Meena Ganesh Md & CEO Portea Medical further believes that the budget has placed a lot of emphasis on healthcare in general and that of senior citizens. “This is very exciting for a company like Portea that focuses on providing ongoing care to this segment. The population of the elderly is set to double in the years to come and thus, there is a need to ensure better access to health services for them – something that the budget has taken steps to address.”

She further highlighted another major push, providing access to free drugs and diagnostic services through the 1.5 lakh health and wellness centres. “Given the rising cost of healthcare, this move should be a beneficial one. It will encourage more elderly to seek time-bound health checkups and diagnosis and ensure that they lead a better quality of life.”

However, there are still some concerns that the healthcare industry needs to look into as expressed by Arindam Haldar, CEO, SRL Diagnostics, “It would be a welcome step if out-patient diagnostics costs or coverage is covered in this limit.  The absence of coverage for outpatient care and pre-existing diseases is an impediment to a comprehensive and affordable health insurance cover.”

Speaking to Inc42, he said, “Specific focus on the diagnostics sector would have been of great benefit to supplement primary healthcare machinery. Nevertheless, we welcome the various health initiatives announced by the government in which limelight has been shed on the alarming rise of non-communicable and communicable diseases in India.”

Be it announcing to step up investments in research and related infrastructure in premier educational institutions, including health institutions, a major initiative named ‘Revitalising Infrastructure and Systems in Education (RISE) by 2022’, or Healthcare protection policy for everyone, healthtech startups are poised to get the shares in the budget 2018.

FitPass co-founder, Akshay Verma is optimistic about the health and fitness industry from the government purview for the first time. He was invited by the Finance Minister for a Pre-Budget discussion and he is happy to see that the announcements are in line with the discussions.

Akshay told Inc42 that, “I’m delighted to see that the outcome of our consultations with the Honourable Finance Minister and his team have resulted in a clear focus on health and fitness in the 2018 Union Budget. While the details of the National Health Protection Scheme are still ambiguous, the announcement recognises fitness and well-being.”

According to him, a focus beyond curative healthcare and into preventive and proactive fitness and health will give a greater quality of life to the crores of Indians that will become a part of our growth story. An unhealthy workforce poses a great threat to the nation’s future.

This concern itself speaks to the need of the hour. An unfit and unhealthy workforce will cost the country billions of dollars. The announcements could be seen as an attempt to deviate from such a crisis.

The only way to get out of such a crisis is to get fit and stay fit. There are certainly other issues that still need to be addressed,  Akshay stated, “We now need to look at: including fitness membership in medical reimbursements and including fitness centres under the GST composition scheme like they have done with restaurants.”

Also, although Satish Reddy, Chairman, Dr. Reddy’s Laboratories is of the view that the Budget will provide a much-needed impetus to healthcare benefits for people in the most deserving sections of society, he is disappointed about one thing, “Overall, while the budget appears to be a progressive one, it was disappointing to note that the reduction in corporate tax was offered only to companies with a turnover under of $39Mn (INR 250 Cr).”

Several healthtech and healthcare startups will taste this measure like a bitter medicine.

The Budget has also addressed the health needs of the senior citizens, “Health insurance deductions increasing to 50K and increase in exemption limit from $156K to $781K (INR 10K to INR 50K) for senior citizens is a big positive move to promote health care and safety amongst the most deserving,” Karni S Arha, Chief Financial Officer, Aviva India.

Post the Budget announcements, 2018 will prove to be an eventful year for the health industry. However, every good news comes at some cost, and with better health plans, comes the extra cess.

Jaitley has announced that in order to take care of the education and healthcare needs of Below Poverty Line (BPL) and rural families, the Budget 2018 proposes to increase the cess on personal income tax and corporation tax to 4% from the present 3%. The new cess will be called the ‘Health and Education Cess’ and is expected to lead to a collection of an estimated additional amount of $1.71 Bn (INR 11,000 Cr).

Besides announcing plans to harmonise the definition of ‘eligible business’ for a start-up with the modified definition by DIPP, and extending the Startup India scheme to March 2021, while there is not much announced exclusively for healthtech startups, the satisfaction is seen with the point no major announcement has been done to derail the startup ecosystem in the wake of next year general elections.