There was a time when strategies of the Indian state governments revolved more around fulfilling the basic needs of the states. However, in the past few years, we have seen the emergence of a new India where the states have imbibed the issues of innovation, technology and digital as their core agendas. Rajasthan is one such state that has always worked hand-in-hand with the central government’s initiatives.

From e-governance to introducing startup policy, the state has so far taken multiple initiatives to build the digital infrastructure of the state and raise its bar on the ease of doing business index.

Amongst such initiatives, in November 2017, the state government raised the curtain from its flagship initiative iStart, in line with the Startup India Hub. And with 700 startups enrolled on the platform in just four months is a testimony of its massive adoption.

As shared by the iStart officials with Inc42, the registered startups belong to varied categories including agritech, finance, hyperlocal services, edtech, and enterprise SaaS, amongst others. Recently, the state officials also came up with the guidelines to utilise the $77.3 Mn (INR 500 Cr) state’s startup promotion fund, also known as Bhamashah Techno fund for the iStart startups, announced during the Kota Digifest in August 2017.

“iStart is the flagship startup incubation programme of the Rajasthan government which is working towards presenting Rajasthan prominently as a major startup hub of the country,” said Akhil Arora, Principal Secretary, IT&C.

iStart Rajasthan aims to accelerate the state’s economic growth and development. The platform is based on an “access-improve-access” model and supports idea/ or concept stage, MVP or early-growth stage startups.

The platform has all the options for startups viz incubators, VCs, accelerators, etc. for people who want to be a part of the startup ecosystem either private or public, at one place.

So How Does iStart Work?

At iStart, the startups are first provided with a detailed assessment report and a scorecard called Qrate Scorecard. For the next step, startups undergo customised and group skill building as well as mentoring programmes. Coupled with the assessment done in the first phase, this helps startups to zero in on the areas that need improvement.

After the successful completion of the first two phases, participants are connected with investors and potential customers via the iStart platform. Startups mentored from the programme are then offered opportunities to pitch their ideas for grants and investments from the Rajasthan government. 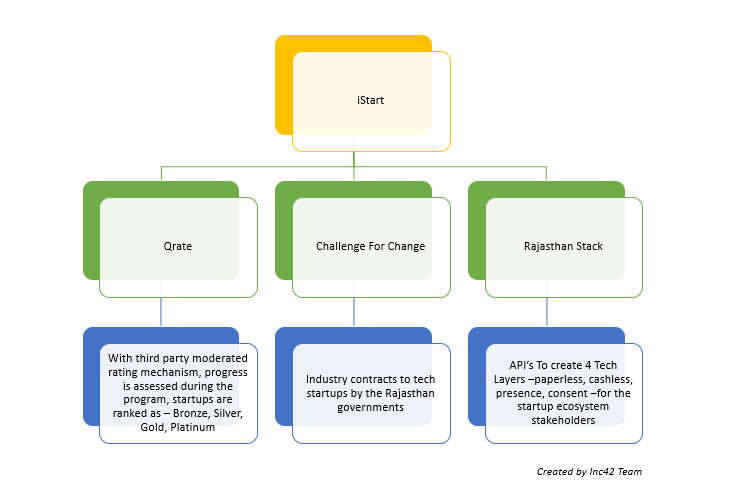 Qrate Ranking is the most important parameter of iStart which sets the benchmark for the startups. Currently, Qrate is the only startup rating mechanism in the country where the startups are ranked on the basis of bronze, silver, gold and signature categories. There are 250 different tangible parameters on the basis of which it rates the startups. Once the rating is done, on basis of these ratings, the platform offers multiple benefits to the startups including the benefit of funding.

The Qrate ranking has been able to further channelise the processes for the effective working of the startups. For instance, earlier banks did not provide credit cards to the startups without registering for a fixed deposit of the value of 20% higher than the credit limit on the card. Also, banks were risk averse and did not prefer to provide loans to the startups.

Now, in accordance with their Qrate ranking, startups can avail all these facilities as well as raise their seed fundings from the VCs and angel investors, on the iStart platform itself. Further, the iStart platform also facilitates and pays for all kinds of benefits that startups need – from broadband to patent filing and from legal advisory to applying for incubators.

iStart Rajasthan: Major Milestones Achieved And The Road Ahead

Just one month after the launch of iStart, it was reported that 300 startups got enrolled on the platform. “We want to become the hottest junction for incubators and entrepreneurs. Currently, we are at number two position but we are aiming for the top spot,” said Akhil Arora in a media statement.

The industry has also applauded the iStart initiative taken up by the Rajasthan government on account of the encouragement it provided to the startup community in Rajasthan. As stated in a media journal,

“This programme created such an environment in the state that startups found it easy to get access to knowledge (know-how related to their respective businesses) and funding through VC firms and government schemes.”

Now with over 700 startups on the platform, the iStart officials are taking more initiatives to fulfill their vision of becoming a major startup hub. And as per a government official, the state government is also working to launch the biggest incubator of India which would have a capacity to incubate 700 startups at one place.

As per AngelList, there are currently 750 active startups in the state. Also, as per Inc42 DataLabs Funding Report 2017, around 30 startups based out of Rajasthan raised $148 Mn (disclosed) funding altogether between 2014-17.

In the years ahead, to what extent iStart can nurture the existing startup ecosystem of Rajasthan will be worth watching. But more interesting will be to watch the extent of growth and success those startups that graduated from the iStart platform can scale up to, and equally noteworthy to follow how they will become successful in gaining investors’ confidence in the late stage rounds.

The Department of Information Technology and Communications under the Government of Rajasthan is organising the third edition of the Rajasthan IT Day from March 18-21 at Jaipur. To know more and for participating register here.