#TheProductSummit2020: Innov8’s CEO Ritesh Malik On Why Not To Be An Entrepreneur

#TheProductSummit2020: Innov8’s CEO Ritesh Malik On Why Not To Be An Entrepreneur 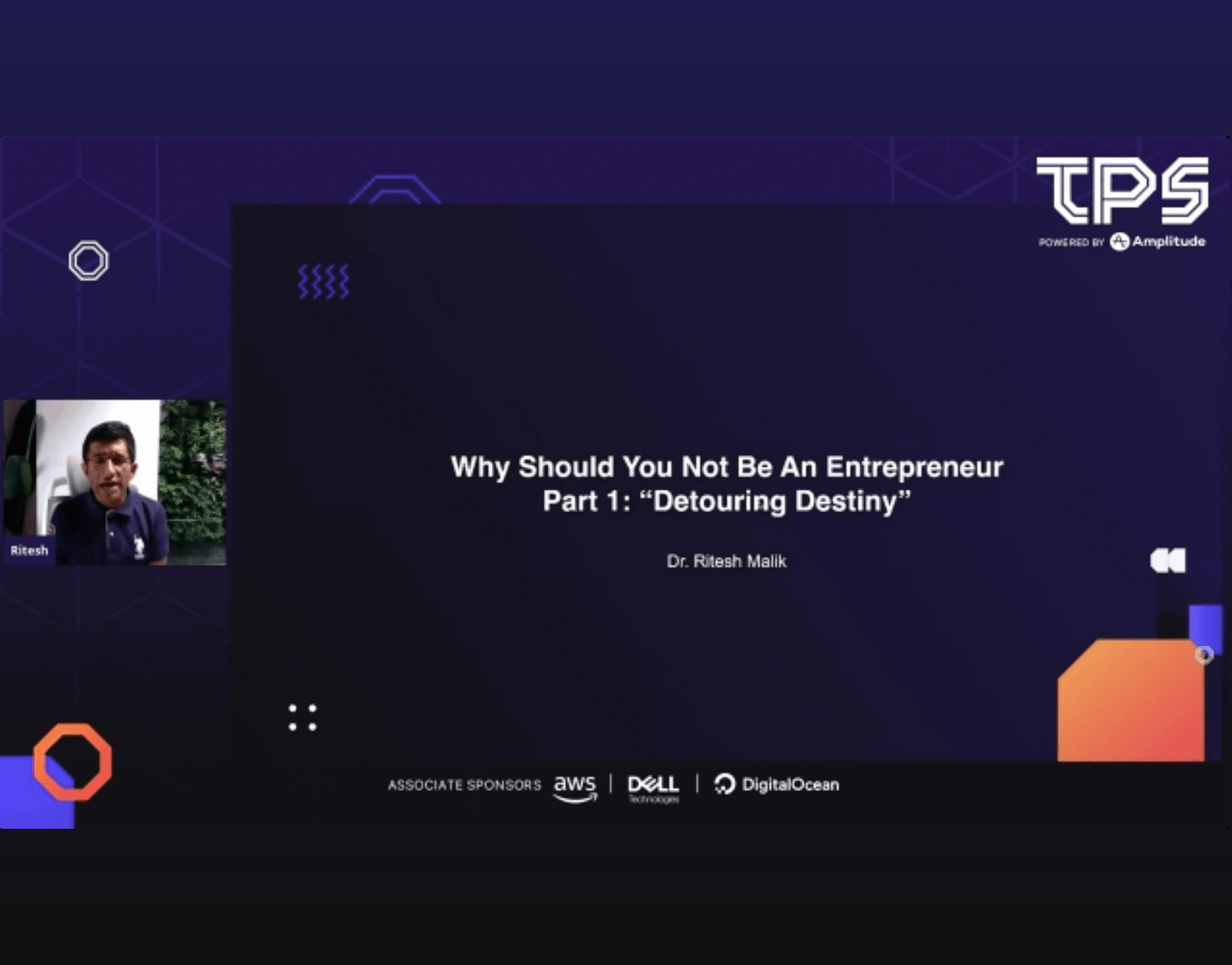 Innov8 founder and CEO Dr Ritesh Malik shared some of his learnings, challenges and tips to budding entrepreneurs at The Product Summit 2020

The best founders are the ones who create opportunities from the problems that they face on a daily basis and it’s not just about finding any problem to solve, but having the passion for it

Malik believes that entrepreneurs cannot dilly-dally and wait for the market to change, but have to find ways to make the product work given the existing conditions

The day two of The Product Summit 2020 could not have got any better. For all the new entrepreneurs and product folks who attended the session on ‘Why You Should Not Pursue Entrepreneurship’ by Innov8 Coworking’s founder Dr Ritesh Malik, it was indeed a bit of self-realisation and reflection upon some of the learnings, stumbling blocks and triumphs that come along the way of an entrepreneur.

At a first glance, while the headline of the session seems to have intrigued curiosity among the audience, Malik genuinely spoke about various skills, values and qualities that one need to adhere to become an entrepreneur, and most importantly, believing in ideas that can change the world for the better and pursuing it irrespective of the roadblocks that one face along the way.

For a medicine professional turned serial entrepreneur and angel investor — with no background in business, finance, management or technology whatsoever —  Malik’s road to entrepreneurship was easier said than done. Sharing his entrepreneurial journey, he said:

“Coming from a family of doctors, I was forced into doing medicine, and post that I started working at Sir Ganga Ram Hospital, Delhi, which I didn’t like for one bit, because, back of my mind, I always wanted to something much more impactful instead of just prescribing Paracetamol to patients my entire life.”

It was in the year 2012, Malik decided to quit his medical professional and took the entrepreneurial plunge, where he ventured into setting up augmented reality startup AdStuck, which developed an app called Alive in JV with the Times Of India Group, however, he exited from the company after it got acquired by Bennett, Coleman and Company Limited, commonly known as The Times Group in 2013. “It was a very quick exit, and we did not make a lot of money out of it,” he added, stating that he learnt the art of entrepreneurship the hard way.

Here are some of the key takeaways from the relaxed session on Sunday afternoon:

Citing the examples of internet giants such as Google, Apple and Facebook, the Innov8 founder said that a large majority of these companies have 28-30% of their employee base of Indian origin. “Now, if Indians are so smart that we can really build products for them, why can’t we have our own,” questioned Malik, recollecting his thought process way back in 2014, and pondering over multiple ways to control the digital destiny of India.

Finding answers to this question, Malik came up with an idea of starting a startup-focused founders fund, which is backed by angel investors like Vijay Shekar Sharma, founder of Paytm and others. “We were lucky. One of the biggest challenges in India way back in 2014 was founders not investing in another founder,” he added.

“The best founders are the ones who create opportunities from the problems that they face on a day to day basis, as they are extremely troubled by them. At the same time, these founders are extremely mad and passionate about helping others not face the same challenges.” 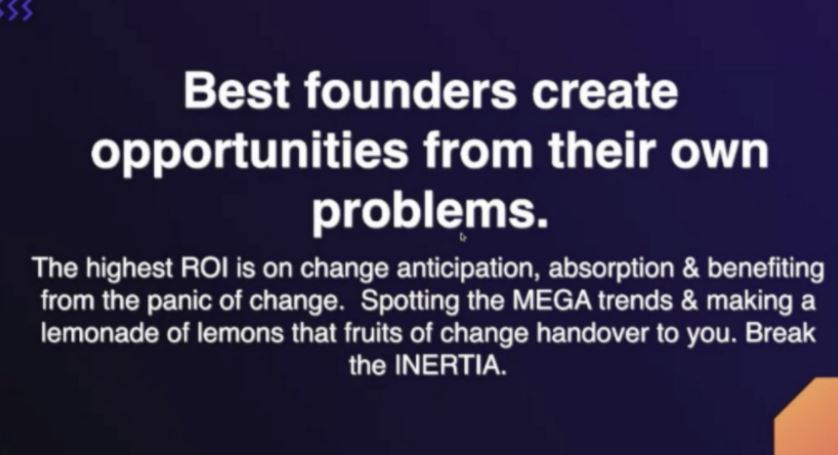 For Malik, the biggest problem he stumbled upon during his entrepreneurial journey was working in an office that lacked infrastructure. “People did not want to work out of sucky offices, especially when an office is a form of expression. So, we decided to create the most beautiful offices, most amazingly located with the best of the best amenities, where best founders come together and build products for India,” added Malik. That was the start of Innov8 in 2016.

Today, Innov8 is one of the third-largest coworking companies in terms of presence and asset under management. It is present in close to 42 campuses spread across India.

“Since our product was physical, we made sure that our designs speak for itself and create beautiful offices that no one in the world questions the ability of Indians,” he added, showing some of the stunning offices, including Mumbai, Hyderabad campuses, and not to forget the world’s first coworking space inside a heritage old fort in Saket, Delhi.

When Innov8 started its journey in 2016, attracting the first set of users was the most difficult part, without which it could not expand its business. Malik realised that India has two problems — one is that India does not have innovators (people do not want to try your product if your industry is new), and the second is the herd mentality (once you get a hundred users, and if they love your product, they will refer to at least your first 1 Lakh users).

Interestingly, Innov8 was able to solve these problems by providing a differentiated product experience by creating cohorts, which helped onboard users and founders that saw real value in productivity and outcomes. Further, it took the community approach to scale, where it invited various stakeholders in the industry to drive engagements and hosted a lot of events, including kitchen events, yoga sessions, comedy shows etc.

“Once this started gaining traction, we started welcoming a lot of foreigners to actually become a part of our early community,” added Malik stating that this created a FOMO among the Indian users, which actually helped them get their first set of users. 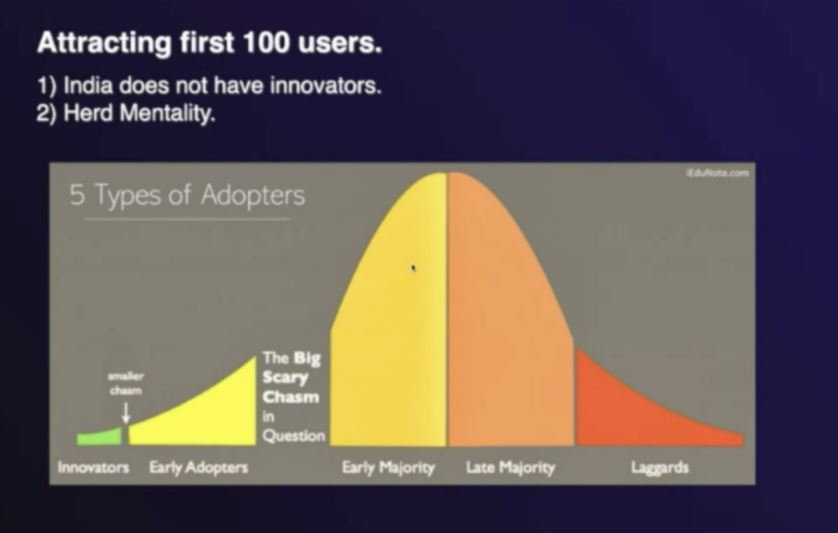 “There are always two roads which will emerge for an entrepreneur, and you have to take the one less travelled,” said Malik.

The Innov8 founder was referring to the laid back attitude of some wannapreneurs, who often say that they will start the business within the next six months. An entrepreneurial job is not for everybody, it’s hard, and takes a large amount of dedication and willpower to go the extra mile.

Quoting from his personal experience, he said that the best time to start your business was yesterday, and the second-best time is today

Besides focussing on the minimum valuable product (MVP) or v1.0 of the product, Malik told entrepreneurs to focus on the unit economics from day one and start generating value for your customers, the faster the better. “Customers should be blown away by the cost that they are paying for your product so that they and go tell it to 1000 new people. That is the kind of product you need to create.”

In addition to this, Malik also emphasised on learning ‘sales’ skills and mastering the art of digital selling. “If you do not know sales, you will never be able to build a large company which comes into the next phase of building your brand and marketing,” he added, highlighting the importance of leveraging social media platforms like Facebook, Twitter and Instagram to market and sell the product. “You’ll be amazed at the kind of leads that you generate.”

When it comes to raising capital, Malik suggested entrepreneurs to keep the pitch simple and easy to understand, and at the same time, encapsulate everything which is required for the investor to actually look into. Further, he said that non-sexy stuff such as legal, HR and CA are really important as it pays more in the long run than anything else. “In fact, you will deplete a lot of your resources, if you do not hire at the right time.”

Lastly, the culture and ability to innovate, Malik said that whenever you decide to spend $1 always ask yourself if this will increase your NPS or add value to the bottom line of the business, and start creating decision metrics for your company.

“As a CEO, you are also a chief clarity officer, write down in a document everything you are feeling, and make sure to get the clarity for your team and create a key performance indicator (KPIs) for your team, measure them, and be frugal,” he added.

Giving an analogy of physics in business, Malik said that speed often gives you the metrics of how fast you are going in terms of scaling your business. However, Malik believes in the whole idea of creating velocity, which measures the direction of your company continuously and measures it by the metrics around that.

Citing the examples of Kodak and Blackberry, Malik said that change is constant, as an entrepreneur one needs to adapt to this and focus on eliminating inferior products and systems and scale accordingly, just like Darwin’s theory suggests. “In business, the natural selection is done by our customer, either you innovate or die,” he added, stating the importance of developing research and development capabilities within the company so that entrepreneurs can leave a legacy behind.

“For this, each day, focus on improving your product 1% each day, and the compounding will do the magic,” he added.

For pursuing entrepreneurship, trust plays a major role and defines the ability of a founder and the brand. How does one build this trust? 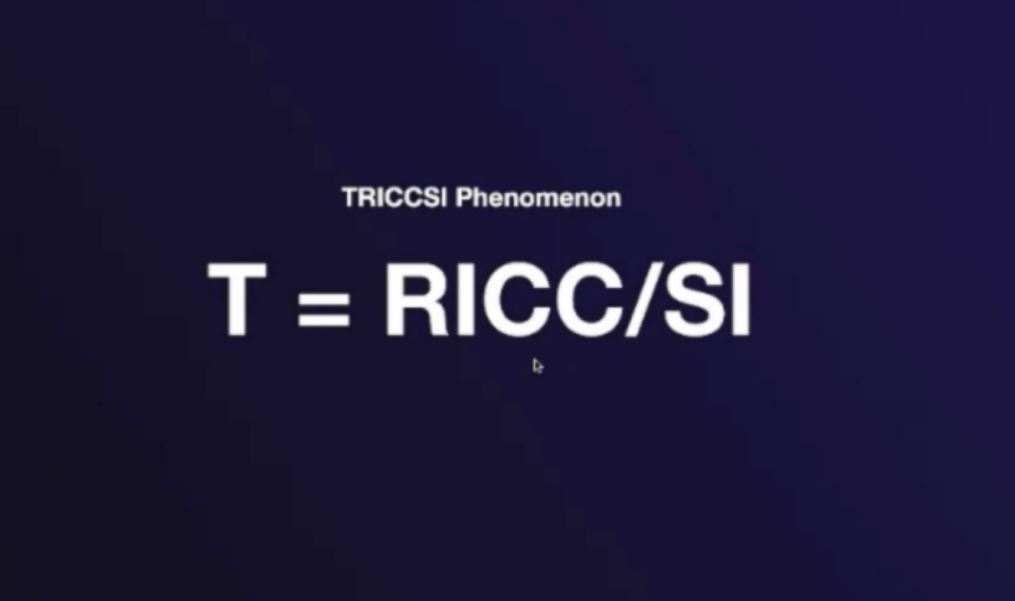 Further explaining this idea, Malik introduced a mathematical formula, which he calls the ‘TRICCSI’ phenomenon. In other words, this formula analyses the trust quotient of a startup, where trust (T) is a factor of reliability (R), intimacy (I), consistency (C) and credibility (C), divided by self-interest (SI).

“Trust is something which will give you long term benefits that you can’t even imagine. As an entrepreneur, building a culture of trust is really really important. Make sure you have an amazing cultural value which brings out the best in you and your company, alongside communicating your vision to various stakeholders in your industry,” concluded Malik.