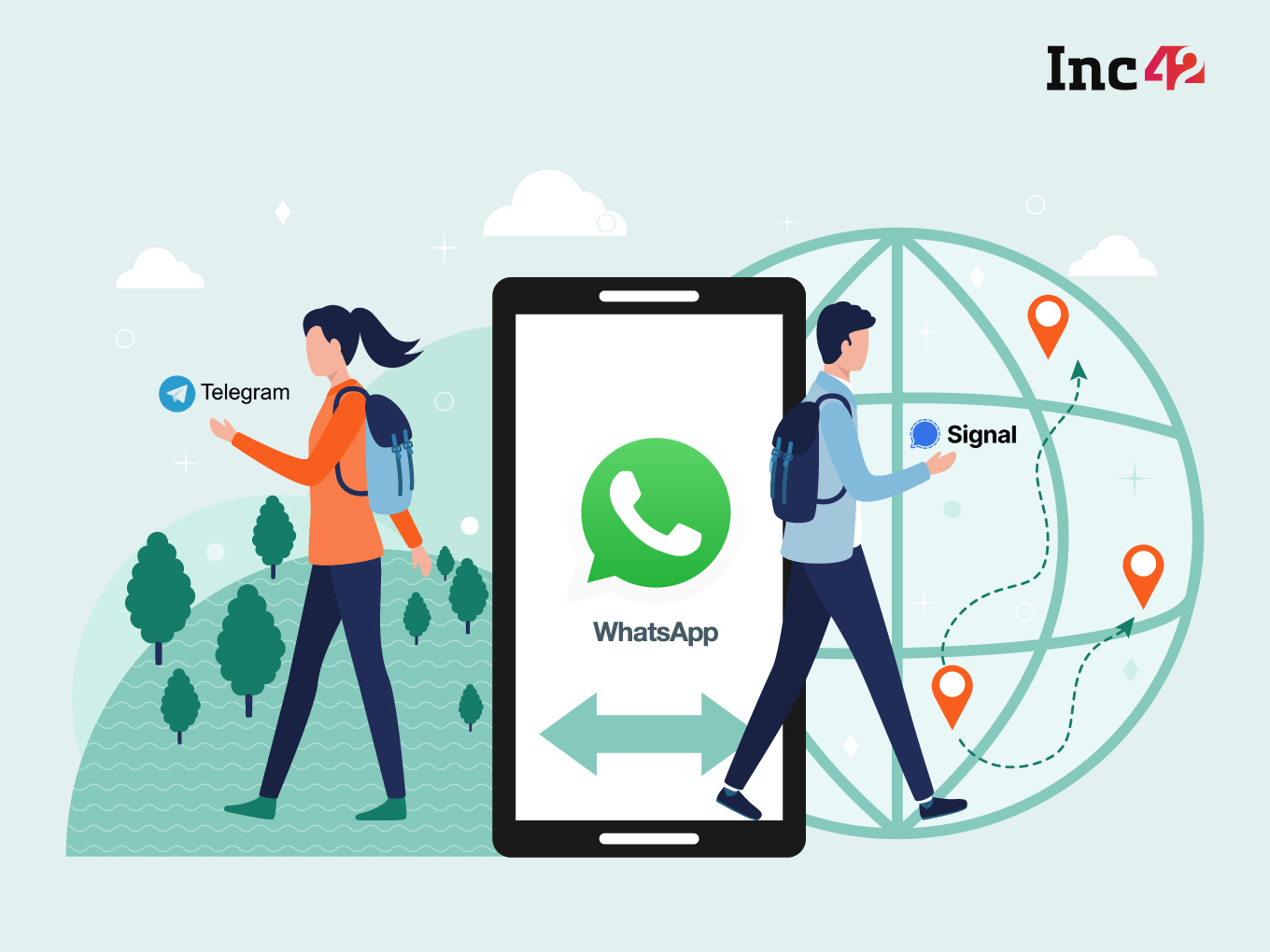 Experts and tech evangelists are calling for a WhatsApp boycott, but is that even possible in India, where the app has over 400 Mn users?

WhatsApp has over 400 Mn users in India — that’s more than the population of the USA. So it’s no surprise that its latest privacy update has ruffled feathers in a manner usually only reserved for national policy decisions.

To be clear, WhatsApp has always shared data with Facebook since the latter acquired it in 2014, but until recently users had the option to opt out of it. The latest changes to terms governing data sharing with Facebook removes this option and has sparked off debates across the tech and social media ecosystem.

Under the new terms and conditions, WhatsApp would share transaction data, mobile device information, IP addresses, and other data on how users interact with businesses on WhatsApp and with Facebook group companies, including Instagram. While this seems standard in the world of massive tech behemoths who have hands in multiple pies, the real problem in the case of WhatsApp is as the policy says — it’s their way or highway.

Critics are now urging consumers and businesses to migrate to other instant messaging platforms which are seen to be more secure and are claimed to offer superior encryption. Whether this indeed results in one of the largest app exoduses in history remains to be seen.

But the fact is WhatsApp’s recent move has sparked a pan-India discussion about data privacy and safety unlike ever before. Security experts had been calling for such debates for ages, and then Indian market may finally be mature enough to have these discussions. But moving away from WhatsApp — where millions of Indians begin and end their day — will be a tall ask, given how ubiquitous the app is India.

According to the company’s ‘diktat’, if users fail to accept the new privacy policy by February 8, 2021, they will lose access to their WhatsApp account. Many have called out WhatsApp’s forced consent as unethical given its dominant market position. Elon Musk, currently the world’s richest person, tweeted, “Use Signal”, which turned into a rally cry as Indian techies and the startup ecosystem joined in on the conversation about shifting to WhatsApp’s rivals Telegram or Signal.

“They say, the market has power. We are the largest market. Here in India WhatsApp / Facebook are abusing their monopoly & taking away millions of users’ privacy for granted. We should move on to Signal App NOW.  It is upto us to become victims or reject such moves,” wrote Paytm founder and CEO Vijay Shekhar Sharma on Twitter.

“There is a feeling that Indians don’t care about privacy matters. This lethargy or ignorance is what the large tech companies exploit. So glad that WhatsApp’s recent change in Privacy policy has become a household discussion matter,” wrote Rajesh Sawhney, founder of startup accelerator GSF and cofounder of food tech platform InnerChef on the social media platform.

The new policy primarily targets business interactions, transactions and other business-related features, which are said to allow WhatsApp and Facebook to support third-party service providers in a better way and provide advanced features such as analytics among others. But there’s definitely a sense that this is a lot more data than most users bargained for.

Are Signal And Telegram The Answer?

The leading rivals to WhatsApp’s messaging throne are Signal and Telegram. Perhaps the one that has earned the most headlines in the past week is Signal, developed by the Signal Foundation and Signal Messenger LLC, is a non-profit company. It was created by US-based cryptographer Moxie Marlinspike in 2014, who is currently CEO of Signal Messenger and WhatsApp cofounder Brian Acton. Acton, who quit WhatsApp in 2017, has invested around $50 Mn in Signal.

The reason most experts recommend Signal, which uses similar end-to-end encryption as WhatsApp, is because the app only collects the user’s phone number. The app does not request for permissions to connect to any other user data reducing user profiling opportunities. Some forks of Signal, which is an open source protocol rather than a single app, do not even need users to furnish the phone number.

WhatsApp’s biggest rival Telegram was launched by Russian brothers Nikolai and Pavel Durov in 2013. Like Signal, Telegram too supports self-destructing messages for private chats. But Telegram does require phone numbers as well as access to user location, which is a red flag according to privacy experts. Besides, Telegram only supports end-to-end encryption for ‘secret chats’, while its other cloud-based messages also use encryption, but with a server in the middle.

Experts are divided on how far it is feasible for users to abandon an app like WhatsApp which enjoys a dominant market position. The key concerns here being Facebook’s ubiquitous presence across the internet and as an advertising platform. There is also some scepticism that the current hype may turn into all-talk-no-action given the massive user base and ease of use offered by WhatsApp.

“Nope,” tweeted Lightspeed India’s Romit Mehta, in response to a question about moving to other messaging platforms. He added, “300 Mn plus people on Facebook anyway, another 140 Mn plus on Instagram, The fear of ‘privacy’ is so overblown in the let’s move from WhatsApp discourse. A classic case of Twitter discourse making a thing sound bigger than it is.”

Similarly, tech policy and venture capital advisor Vidhya Shankar Sathyamurthi notes that getting a critical mass of users to shift away from a platform that works perfectly fine is easier said than done.

“WhatsApp is the closest we have to a WeChat and the likes of Telegram and Signal do not compare to the range of feature heavy and data light services bundled within WhatsApp. Now with the JioMart initiative, it is also creating a touchpoint for millions of small businesses. Would these businesses really want to opt out?” Sathyamurthi told Inc42.

Beyond the immediate issues surrounding data collection, the larger concern with WhatsApp is how far the combination of user data across WhatsApp, Facebook and Instagram will increase Facebook’s ability to profile users. The fact that WhatsApp keeps track of device IDs means that even users without Facebook accounts could be subject to some form of profiling, say experts. In the absence of overarching law and policy supervising how citizen data is profiled, users have little control here.

“There are over 50K Indian apps (including all top apps) which have the Facebook software development kit. They already have your information which WhatsApp intends to share now too. Probably, they (apps) have a lot more than what WhatsApp may share,” Deepak Abbot, cofounder of digital gold loans provider Indiagold, and former Paytm growth chief, wrote on Twitter.

Prasanth Sugathan, legal director at the Software Freedom Law Centre, India believes that while users need to be encouraged to migrate to Signal or Matrix — another messaging app which claims end-to-end encryption — the popular choice Telegram may not be a safe alternative to WhatsApp. Beyond this, there could be technical issues that may prevent users from migrating.

“We are seeing that this migration to more secure messaging applications is not common in people from rural areas and older people. One of the primary causes behind this is their familiarity with WhatsApp’s user interface. For areas with poor internet connectivity, WhatsApp is again a preferred choice because it has been designed to work even in the case of poor internet connectivity,” added Sugathan.

Even as WhatsApp faces its biggest debate in India, the country is still awaiting the implementation of the Personal Data Protection (PDP) Bill, which is set to be tabled in the parliament later this month. The bill has been envisioned as a means to protect Indian consumers from exactly the kind of data misuse that many fear from WhatsApp.

The PDP states that companies can only use information for purposes that are reasonably linked to the reason for which the user had shared the information in the first place. Will WhatsApp’s blanket rule forcing users of the messaging app to give consent to have their data profiled on a separate platform fit the legal definition?

A previous version of this article erroneously mentioned the name of Paytm founder and CEO as Vishal Shekhar Sharma. The error has been rectified and the latest version of the article reflects the change. We deeply regret the error.