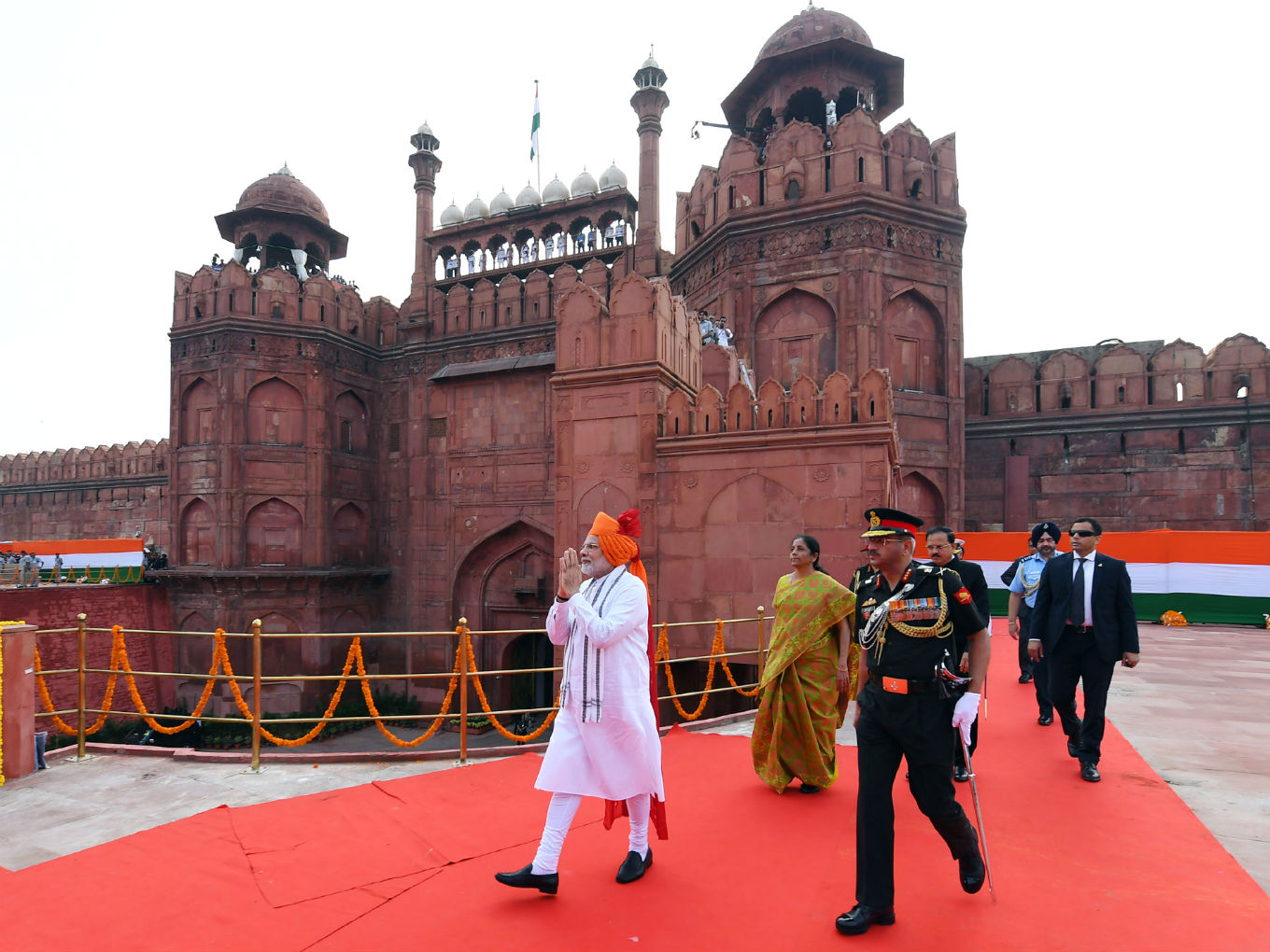 Will the Independence speech have medicament for current crisis?

Can GST be limited to 3 slabs and be more inclusive?

“At the stroke of the midnight hour, when the world sleeps, India will awake to life and freedom.”

Jawaharlal Nehru’s historic words on India’s first Independence Day on August 15, 1947 have inspired generations of Indians afterwards. The iconic address by the Prime Minister from Delhi’s Red Fort has since become an event anticipated by millions of Indians. Each PM presented their vision for India.

Over 72 previous I-Day addresses, the PM speeches have always revolved around the most pressing issues in the country — whether it was rebuilding after the British rule, or the ailing agriculture and dairy sectors in the 1960s and eradicating poverty in the 1970s. Over the years, the focus has shifted with each decade to matters that are universal, yet have a deep resonance in the Indian context.

Consider Rajiv Gandhi’s speech in 1988 when he spoke about “land legislation reforms” or in 1989, when he addressed the issue of self-reliance and industry in the midst of the Bofors scandal. Following the 1992 bomb blasts in Mumbai, P. V. Narasimha Rao, who is credited for the biggest Indian economic reform of globalisation, spoke about reviving the economy after the blasts had struck Mumbai’s Dalal Street or stock trading centre.

“In such a big country, will we allow two or three bombs to put the economy in disarray? How will we work? We will just not permit this to happen.” – P. V. Narasimha Rao on August 15, 1993

Each Prime Minister before him has had huge pressures to deliver India from the pains of the current day and for Narendra Modi too, the task is cut-out clearly. In his first Independence Day speech in 2014, he laid out his idea of India with a focus on development through Digital India (mentioned eight times), Swacch Bharat (mentioned nine times), and skill and employment (11 times). And in 2015, for the first time, the focus was on Startup India.

Announcing Startup India, Modi had said then, “There should not be any district, any block in Hindustan where there are not start-up initiated in the coming days. Whether India cannot dream that India becomes number one in the world of startup.”

While the success of a programme is always subjective and varies as shift your frame of reference, credit must be given to the Modi government as over 20K startups have so far been recognised under the programme. And, almost every state today has its own startup policy.

That said, on Independence Day 2019, the mood seems to be far less cheerful and dramatically different than the optimism of 2015.

This is the era of Modi 2.0 — the achievements that Modi would focus on is the abrogation of Article 370 and dilution of Section 35A which changed the state status of Jammu and Kashmir, to create two union territories in J&K and Ladakh.

The Modi govt has stated time and again since that momentous decision that it will bring investments and development to the region — it has already announced an investor summit in Srinagar in October, and plans to incorporate Leh in Ladakh under the Smart City mission.

Ironically, while the rest of India will be celebrating Independence Day today, the people of Jammu and Kashmir won’t be part of the public celebrations and will have to usher it in silence. All internet and telephone communication from and to J&K have been cut off for weeks and ‘curfew’ has been in place for many days. There are also reports of violence against protesting civilians, so a lot is indeed at stake this August 15 for Modi.

But that’s not the only major problem for the Modi government this Independence Day.

While the Kashmir issue has gained global attention, the Indian economy is currently in a slowdown. The Union Budget 2019 was called populist and token, with no real reforms for the economy.

On July 5, despite finance minister Nirmala Sitharaman having announced INR 70K Cr package for PSBs, and slashed corporate tax to 25% for companies with turnover upto INR 400 Cr, Modi 2.0 is currently facing a mountain of issues and challenges. The road of development seems to have hit a roadblock as experts believe the announcement of too many flagship programmes have derailed the implementation of most of the programmes given the limitations of government projects and limited deployment of government funding.

Further, as envisioned in the budget, the Modi government aims to make India a $5 Tn economy by 2024. However, India, which in 2017 was the fifth largest economy in the world, has now slipped down to seventh below UK and France.

Besides Article 370, GST and demonetisation are touted as the biggest moves by the Modi government. While demonetisation fell flat in most of the parameters, GST too has failed to achieve what it was intended to. And in fact much of the slowdown has been attributed to the aftermath of both these moves, which many experts had predicted in 2016 and 2017 respectively.

In fact, in his 2018 Independence Day speech, Modi mentioned the challenge “There was unanimity on GST. Everyone wanted GST but they could not arrive at a decision because while on the subject, they were thinking in terms of their vested interests and whether this will translate into electoral gains. Today, with the help of small traders, their open-mindedness and their attitude of accepting the new, the country has implemented GST. A newfound confidence has been generated in the business community.  The small entrepreneurs, small businessmen who faced teething difficulties in adopting GST, accepted the challenge and the country is now moving ahead.”

While Modi might have praised the GST move, the Comptroller and Auditor General of India (CAG) in its latest report Compliance Audit Of Union Government, Department Of Revenue (Indirect Taxes – Goods And Services Tax) observed,

“The complexity of return mechanism and the technical glitches resulted in roll back of invoice-matching, rendering the system prone to ITC frauds. Thus, on the whole, the envisaged GST tax compliance system is non-functional.”

The latest and the largest addition to the government’s worries is the looming economic crisis ahead. While 30 steel companies have already downed their shutters in the past few months, the Indian auto industry is facing its largest crisis, thanks to the tumbling government policies.

According to the Society of Indian Automobile Manufacturers (SIAM) report, around 2.30 lakh auto sector jobs have been lost while the sale of passenger cars in July 2019 fell 35% compared to July, 2018.

Will Startups Get An Answer On Independence Day?

But let’s come back to Startup India, which remains by far the most effectively implemented flagship government programme. Even here the stakeholders are not very enthusiastic about the much talked about tax reforms. With Cafe Coffee Day founder VG Siddhartha having allegedly committed suicide citing harassment by income tax officials, ‘tax terrorism’ is back in the news. The Union Budget 2019 enhanced surcharge on individuals having taxable income from INR 2 Cr to INR 5 Cr and INR 5 Cr and above, and the effective tax rates for these two categories were increased by around 3% and 7% respectively.

However, it’s not the latest Budget that is the problem, according to Aarin Capital founder-chairman Mohandas Pai. He believes that tax terrorism was seen under the last Modi government too. No effective steps were taken to bring it down, Pai said.

He added, “Our laws need to change, as income tax officers now have the power to arrest anyone. That kind of power leads to harassment. The UPA II and (Arun) Jaitley (finance minister during Narendra Modi’s first term as Prime Minister) also gave them so much power. This is the result of our politicians not talking to businessmen and going only by the view of officials.”

Meanwhile, India’s lawmakers seemed to be in flux. In February, the interim finance minister Piyush Goyal announced the Digital Villages programme, but in the July Union Budget, it barely got any mention. And we are not even talking about implementation, which has been forgetful at best.

In July 2019, Modi asked his supporters and those who use the Narendra Modi and MyGov apps to share their feedback, inputs and suggestions for his upcoming Independence Day speech. Over 27K comments have poured in so far.

Perhaps, Narendra Modi would have seen many suggestions for improvements in his pet projects such as Ayushman Bharat, Swacch Bharat, Jan Dhan Yojana, or the Pradhan Mantri KIsan Samman Nidhi Yojna. And he might also get a few suggestions from citizens about how to deal with Kashmir. But for India’s startup ecosystem and ailing business units, the burning issue is how Modi 2.0 tackles the economic slowdown and solves startup woes.