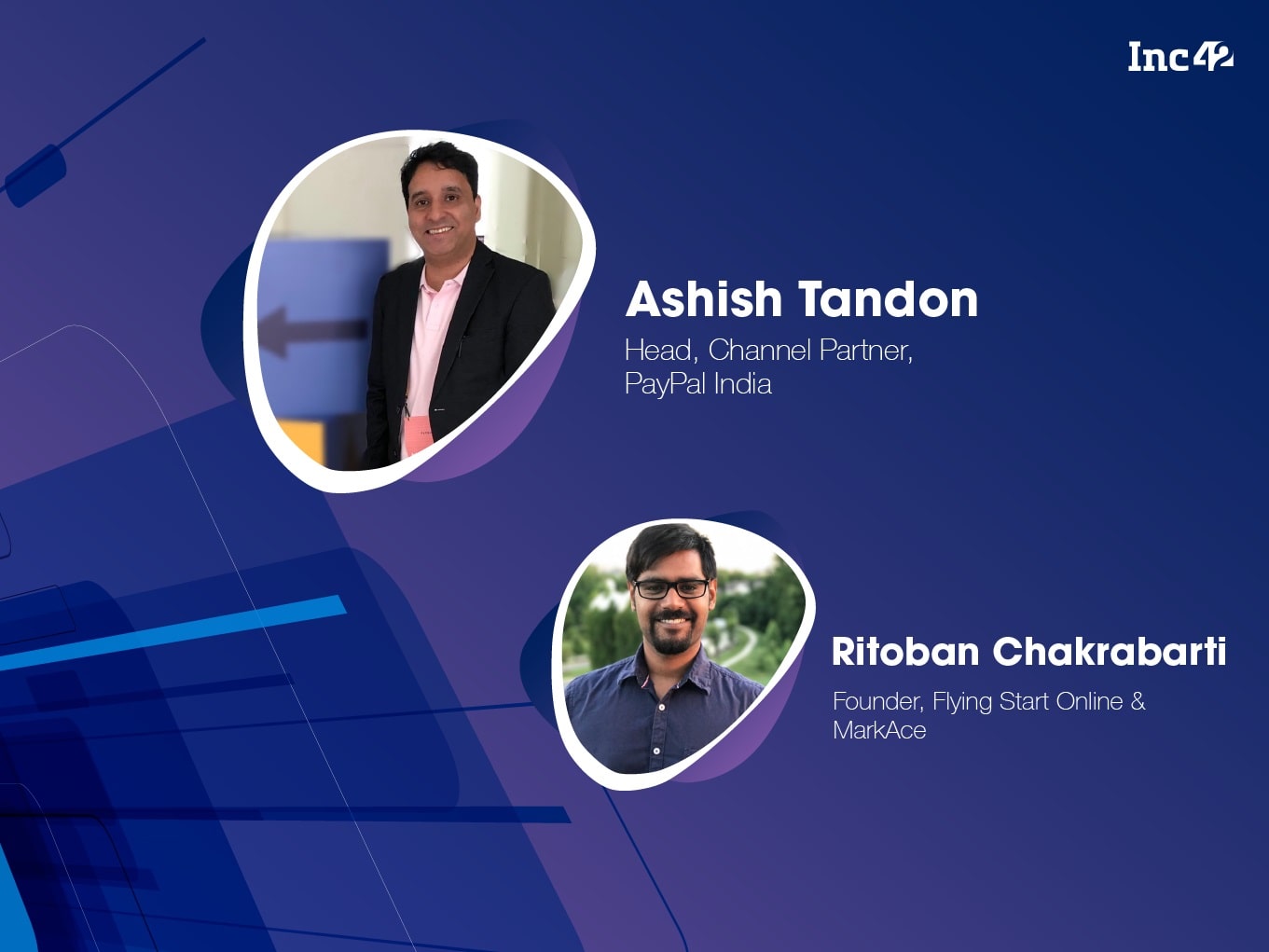 Hosted in association with PayPal, this was the last webinar from the series by Inc42 — The Rising Freelance Economy

Ritoban Chakrabarti, CEO, Flying Start Online spoke about his entrepreneurial journey and what helped him

Technology has become an integral part of our lives today, enabling us to perform all mundane as well as important tasks on our smartphones sitting in the comfort of our home. Not only has it revolutionised the way we carry out our daily tasks, but it has also opened many prospects for the young talent, who don’t want to join the corporate world.

Riding on this wave, there has been a huge rise in the number of entrepreneurs in India. Gone are the days, when starting your own venture was only for those from business backgrounds, or restricted to only those with the resources.

The rise of the Indian startup ecosystem has also fueled the rise of freelancers in the country. Understanding this boom in the entrepreneurial economy, Inc42 and PayPal India launched a series of webinars titled—The Rising Freelance Economy last year in April. These webinars focused on educating and enabling freelancers and entrepreneurs on how to leverage the opportunities around them to achieve their potential. Past webinars focused on a broad range of topics including Carving A Successful Freelancing Career, Women Freelancers In India, Building A Successful Freelancing Career, and more.

Chakrabarti began his entrepreneurship journey in 2006 with freelancing and then expanded to affiliate marketing. After a decade of working on various digital marketing ventures, he decided to teach online entrepreneurship through his YouTube channel.

He spoke about how he trained budding entrepreneurs and freelancers to help them succeed and equip them with the know-how of creating a strong online presence.

While the opportunities are ripe in the sector, payments continue to be a hurdle. This is where companies such as PayPal can help. Ashish touched upon the challenges that online entrepreneurs face and how PayPal supports the growth of businesses by enabling a seamless process for receiving payments from all over the world and helping them partner with platforms such as Shopify and Magento, to leverage the global opportunity.

Catch up with the full webinar right here:

And here are some excerpts from the webinar:

Inc42: Back in 2006, when digital was just kicking off, you ventured into online freelancing. What attracted you to it and tell us about the journey?

Ritoban Chakrabarti: I started my career with Yahoo GeoCities and I was trying to find out how other people were getting jobs online. In those days, there was a platform called ScriptLance and after using it for a while, I realised that the users with the maximum reviews, were getting most of the jobs. So even if I was confident for a particular project, I would never get the job. I started quoting ridiculously low fee just to build up reviews. I worked for eight to ten hours on a proper coding project and got just $5, but what it did get me was a five-star review. That’s when I realised that I could bid higher and get better projects.

It showed me the power of freelancing. While I was still in college, I was making two to three times more money than what an average engineer would have been making after graduating from college. So it was pretty intense, but I’m really grateful for that time because it showed me what is possible.

Inc42: What was the genesis behind Flying Start Online? How are you enabling entrepreneurs in this platform?

Ritoban: I’ve done pretty much everything under the sun that you can do when you’re running an online business—SEO, affiliate marketing, blogging, selling courses and more. During my journey, I found success in affiliate marketing strategies. I then started creating and selling courses. That is when I realised that a majority of the people don’t go through the course. They leave it in between, or they start executing what is taught in the course, but then they drop off. The mindset just wasn’t there.

To change the game, I came up with an idea—in a world where you have to pay for getting an education and information, I decided to share everything I know about setting up and running online businesses, for free. That was the reason I started Flying Start Online.

Starting with different strategies that I’d learned over the years, I then started teaching about ecommerce and have seen immense success.

Inc42: Digital payments is one of the pillars of online entrepreneurship. How does a platform like PayPal play a role in this?

Ritoban: I have had a PayPal account for a really long time. I feel that ecommerce just cannot be done without PayPal. I was looking at the stats on my ecommerce store and found that 65% of my payments come by using PayPal. So it’s like a no brainer. If you want to do global commerce or you want to sell anything online or physical, you should have PayPal, because it’s just what people trust.

Inc42: What role do players like PayPal play to enable the entrepreneurship ecosystem?

Ashish Tandon: One of the major problems that entrepreneurs are faced with when setting up a new business, is how to monetise the business. You might have a great product, might have a great idea, you’ve done all the great work and you’ve got great traffic to your site, but how do you get the consumers coming to your site really make a purchase and how does the merchant receive this payment in a timely manner.

Inc42: What are the things you feel an entrepreneur should look for while choosing a platform for their online business?

Ashish: Best is to focus on sticking to one’s core skill set, which is primarily building a product and then focusing on the sales and distribution aspect. Some of the things you should look for while choosing a platform are:

Audience: Between capital and mentorship, which is more important for a startup?

Ashish: Prioritisation is something which is extremely critical for entrepreneurs because you might be faced with issues which you probably didn’t envisage before starting on your entrepreneurial journey. Over time you realise that there are things that you’ve not really planned for. And for somebody who has probably walked that path before you, can guide you in the same and that’s where mentorship comes in.

Audience: How does one find the right mentor for a startup?

Ritoban: It just depends on the industry you’re in and the kind of business you’re doing. So if you are a freelancer, look at the top bloggers in your industry, the top Facebook group, the top Facebook pages, the top Instagram influencers in your industry, then follow them, watch what they’re talking about, message them, try to get in touch with them, share with them your story. And if they’re interested, they might actually bring you on board.

The way I found my mentor was I used to look at forums. So I started posting on forums, I started replying to people, I found out one guy was really rocking it in one of the industry events of affiliate marketing, which I was in. So I sent them an email telling them I need help in this and I’m willing to compensate them also and they were on board.

Audience: PayPal caters to an entrepreneur’s needs at various levels. How connected is your approach while catering to SMEs/startups?

With these data points, the organisation is committed to democratising financial services. That’s been our global mantra in terms of making payments simple, easy and accessible to every single merchant and consumer. We have product stats, which range from a budding entrepreneur who is just setting up shop or a freelancer who is just kind of writing his first blog on WordPress to receive that payment to even some big airlines which use the PayPal solution.

Further, we offer Buyer and Seller Protection which clearly differentiates us in India.

(This interview has been lightly edited for clarity.)