How The Deepening India-Netherlands Relationship Is Helping Indian Startups

How The Deepening India-Netherlands Relationship Is Helping Indian Startups 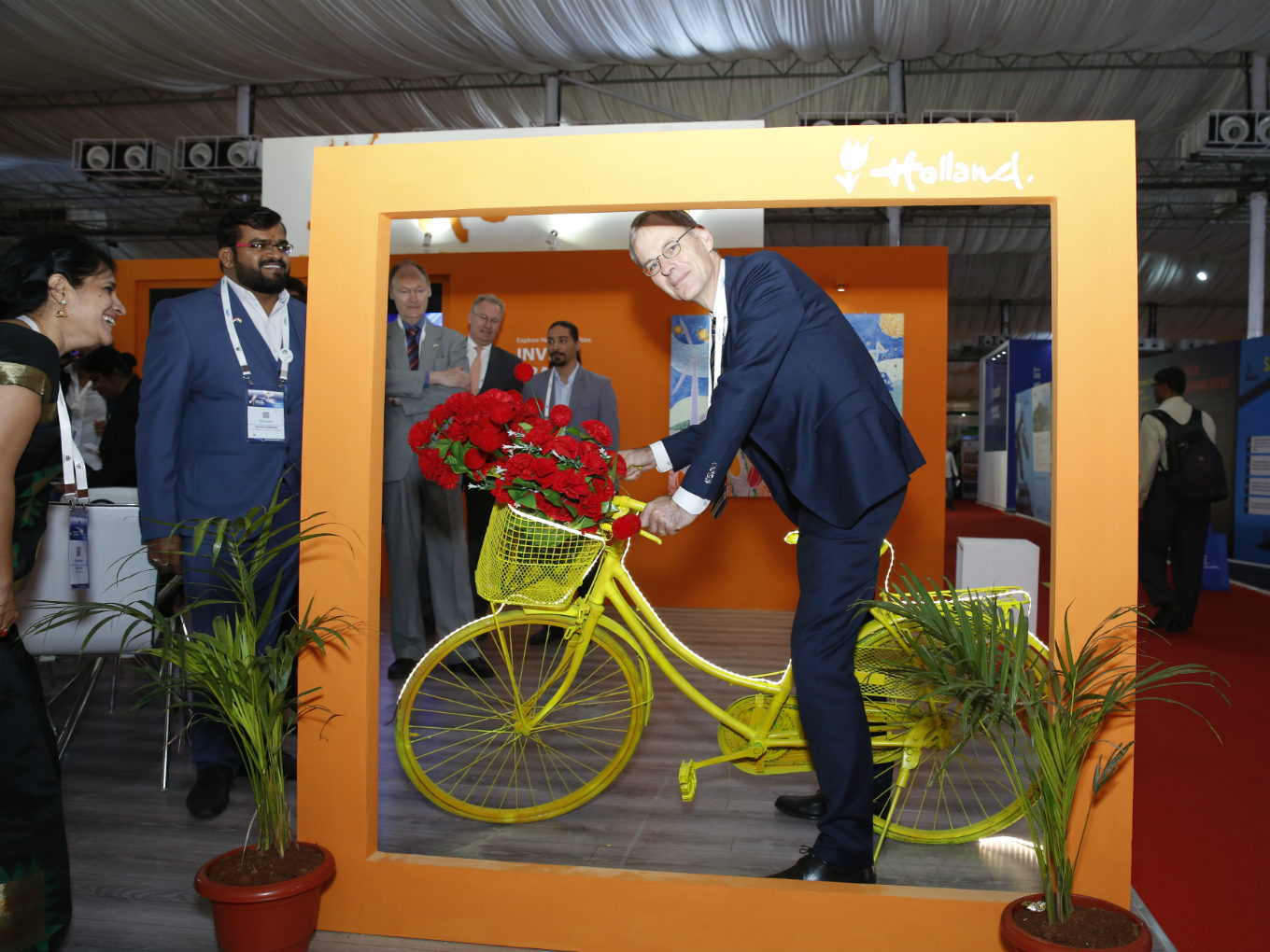 India and the Netherlands have established #StartUpLink, a platform to help startups from both the countries

The main areas of convergence are waste and water management, cybersecurity, fintech, energy, and ecommerce

The Netherlands has signed MoUs with Karnataka in ehealth, energy, cybersecurity, and education

Welcoming the Netherlands Prime Minister Mark Rutte to India during his visit here in May last year, Prime Minister Narendra Modi had said, “There are very few such countries with whom we have this kind of momentum of high-level visits in our relationships. And for this momentum and for giving personal priority to the relations with India, I congratulate my friend Mark from the bottom of my heart.”

Modi’s statement was an acknowledgement of the India-Netherlands relationship, which has deepened and expanded at all levels. More than 200 Indian companies have set up their bases in the Netherlands. The Netherlands is also the fifth-largest source of FDI in India.


On May 24, 2018, Rutte, along with 200+ delegates — the largest business delegation from the Netherlands to ever visit India — made his second visit to the country after 2015.

In the last few years, Brexit has also contributed to this deepening relationship. While the UK is focussing on to retain its India-based investments and businesses, the Netherlands is looking at encashing Brexit opportunities and promoting itself as the most suitable geographical location to tap 500 Mn European Union (EU) customers.

After Brexit, London may not remain the top choice for Indian startups looking to do business in the European market. Among other EU countries — Germany, France, the Netherlands, Irelands, Finland and Estonia — the Netherlands, which is one of the most English-friendly European nations with 90% citizens speaking the language, is emerging as an alternate destination.

Speaking to Inc42 during the Bengaluru Tech Summit 2018 late last year, the Netherlands Ambassador to India, Marten van den Berg, said: “Because of Brexit, more Indian companies are now showing interest in the Netherlands rather than the UK.”

However, he added, “We very much regret Brexit decision, but since it was a decision taken democratically, we respect that.”

After the fall of the power-hungry Dutch East India company, which was active in spice trading and ruling parts of India from 1602 to 1799, trade relations between India and the Netherlands started shaping up again after Phillips, a subsidiary of Royal Philips of the Netherlands, launched its Indian subsidiary in 1930. This was followed by the UK-Dutch company Unilever setting up its first Indian subsidiary, Hindustan Vanaspati Manufacturing Company, in 1931.

The two-way trade between India and the Netherlands stood at$ 6.9 Bn in 2016-17 with a balance of trade in favour of India of $ 3.17 Bn. While India exports mainly textiles and garments, electric machinery and equipment, agricultural products and processed foods, leather goods, cars and other vehicles, organic chemicals, etc, to the Netherlands, its imports comprise machinery/equipment, medical/optical instruments, chemicals, plastics and metal products.

India and the Netherlands have identified potential collaborations in areas such as water management, infrastructure, logistics, ports, highways, inland water transportation, ICT, biotech, energy, fintech, agriculture, and some other areas.

Of late, the Netherlands has been discussing exploring the possibility of science and technology cooperation between the two governments, the private sector and science institutes (triple helix model) as well.

“With collaborations in the areas of waste, wastewater management, and agriculture, the Netherlands wants to converge on the economic, social and technology points, making an impact to the large segment of India which lives below poverty lines,” said Sigrid Kaag, the Dutch minister for foreign trade and development cooperation, during her visit to India last year. She was responding to Inc42’s query on the areas of convergence between the two countries.

Agriculture is another important area of collaboration. With a majority of Indian farmers dependent on traditional means of farming, India is struggling to revive its agricultural sector. With declining productivity and subsequent lower farmer incomes, more than 12K farmers have been committing suicide every year in India.

On the other hand, the Netherlands is the second-largest exporter of agricultural products in the world, after the US, and is known for its smart logistics, storage, and packaging technologies that keep food fresh longer. So, trade cooperation in the agricultural space will benefit both the nations.

Collaborations With Karnataka And Other States

In the conversation with Inc42, Berg gave an account of the state-level collaborations between the two countries. “There is already strong cooperation between Karnataka and the Netherlands. Bengaluru is the R&D hub of India and we see a great possibility of science and technology cooperation with Karnataka.”

The most prominent areas of collaboration are ehealth, energy, cybersecurity, and education, Berg informed, adding his government has also signed MoUs with the Karnataka government in the areas of education and government-to-government cooperation. “Bengaluru is a hub for innovative companies and institutions. Hence, our partnership with Karnataka is very important to connect and engage with the ecosystem of innovation. We do see a lot of opportunity in future,” he said.

The Netherlands government has also signed an MoU with the Haryana government to support the state in the diversification of the agricultural sector, with a focus on horticultural crops.

StartUp Link: Platform To Support Startups Of Both The Countries

In May this year, the two countries officially launched the Indo-Dutch #StartUpLink platform to open up the Indian and Dutch markets for startups from both the countries that are looking to expand to international markets.

The platform has been developed by Indian governent’s investment agency Invest India in collaboration with the Netherlands Embassy, which provides startups access to relevant information, networking, pilot opportunities, etc. The Startup India Hub under Invest India and the Netherlands Enterprise Agency under the Ministry of Economic Affairs and Climate Change of that country will act as a single point of contact and the navigators for their respective countries.

Commenting on this, Berg said, “We are equally looking forward to the Startup Delta programmes with India (Startup Link). The startups can benefit from the Netherlands’ expertise and vice versa. Through this platform, they can learn from each other and share their experiences. The platform aims to help startups explore each others’ territories.”

Last year, a contract was also signed between INCO Business Group which facilates entrepreneurs by providing a smooth landing in the Netherlands and The Indian Lawyers Network in India. With the help of the Lawyers Network, INCO will help startups in global expansion and market entry in the EU.

A startup collaboration has been established between India and the Netherlands in the form of a Letter of Intent between The Hague and Intellecap, a Bengaluru-based firm that provides innovative business solutions to help build and scale profitable and sustainable enterprises dedicated to social and environmental change.

Support For Startups Looking To Expand To The Netherlands

The Netherlands, through its Netherlands Foreign Investment Agency (NFIA), an operational unit of the Dutch Ministry of Economic Affairs, has been organising events such as ‘Holland Meets Bengaluru’ and other similar events in Mumbai and other cities, showcasing the research and development work happening there and state-of-the-art, readymade infrastructure that Holland can offer to Indian high-tech companies, including startups.

The Netherlands also promotes itself as a natural choice for companies to set up their distribution centres while selling their products in the European market.

Berg said, “In the Netherlands, we have been trying to support startups with several instruments which deal with startups, right from the ideation stage to mentorship, incubation, and funding. We even help them in marketing activities. We get them to connect with local companies and with VCs for clients and funding purposes. We have various international collaborations that provide startups with an added opportunity to explore the maximum market with minimum investment.”

“In recent years, India has become one of our top partners. Dutch companies have shown an increased interest in catering to the Indian market. For us, India is a priority country partner at all levels,” he added.

Is Amsterdam The New London?

Amsterdam has been a popular choice for Indian companies for decades. Major Indian companies/Groups like TCS, Infosys, Mahindra and Tata Steel already have a huge presence there. The city has been celebrating Indian festivals — Holi and Diwali — with great spirit.

With all the startup-related activity between the two countries, will Amsterdam be able to claim the place London has vacated?

The Hague, another popular city in the Netherlands, is also emerging as a important startup destination which many can opt for as an alternative to Amsterdam.

India has the second-largest population in the world with over 1.2 Bn people, which is over 17% of the world population. This makes India one of the biggest markets in the world. At the same time, the country is struggling with a plethora of issues which include waste and wastewater management, air pollution, farmers suicides, and more.

The recent trade war with the US, which has not been extending startup visas to Indians for the last couple of years, has largely gone in favour of the UK and the EU. Even though Germany, France, Finland, Ireland, and Estonia are looking to strengthen their synergies with India, the India-Netherlands relationship seems to have an edge over the others and both the countries look forward to nurturing and growing it further.