How The Coworking Ecosystem Champions Are Creating Communities And Enabling Startups

How The Coworking Ecosystem Champions Are Creating Communities And Enabling Startups 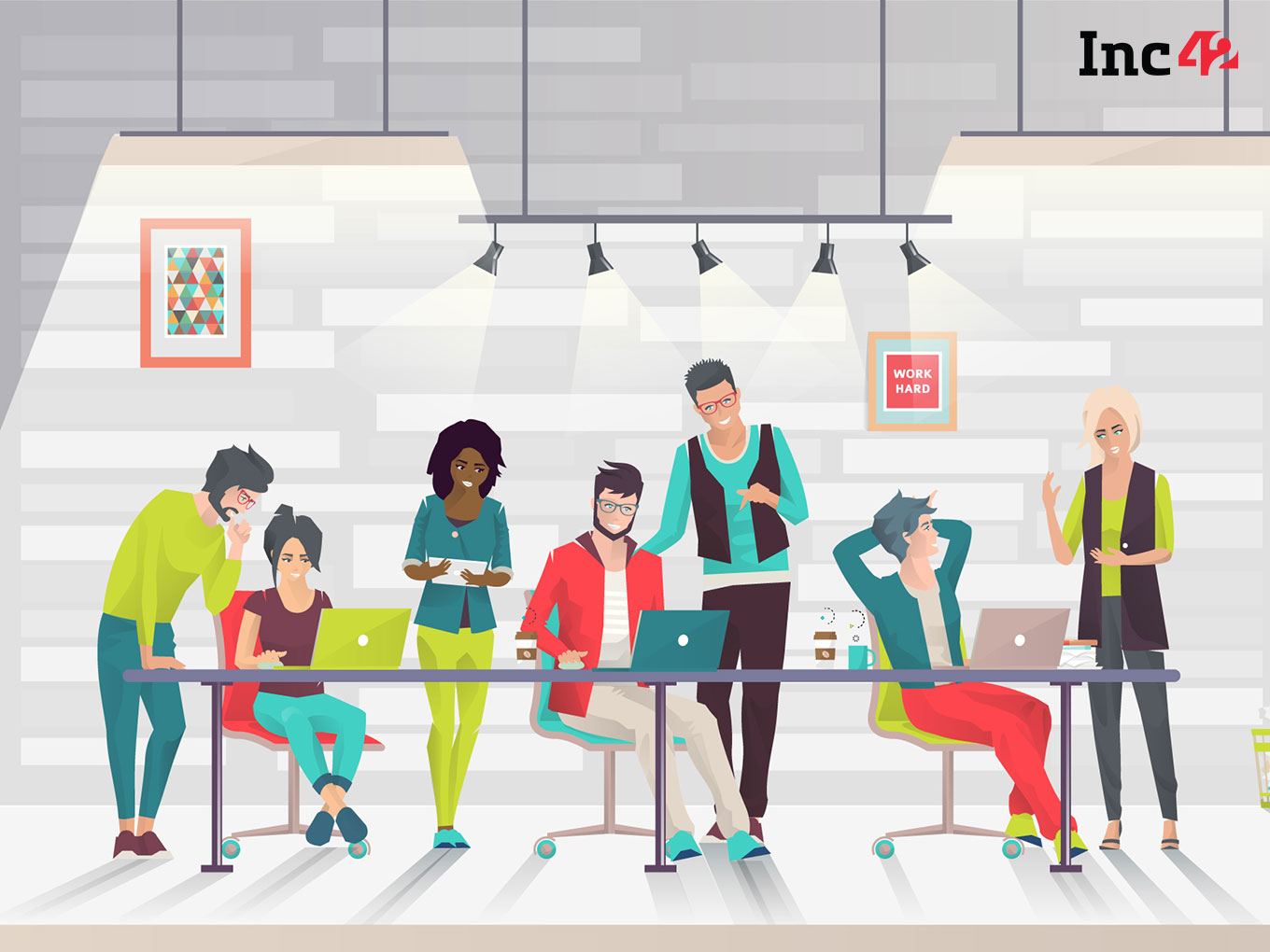 At present, India has about 300 coworking spaces spread over 15 Mn sq ft

“The spirit of coworking allows you to find coworkers who are worth working with.” — Cynthia Chiam, a renowned Malaysian entrepreneur, trainer, and author

The Indian coworking space is on the verge of an interesting inflection point. On one hand, it is offering the booming startup ecosystem a viable option for a hassle-free take-off sans major investments in an office space. On the other, India’s growing startup ecosystem and the increasing acceptance of coworking spaces by Indian entrepreneurs is attracting foreign coworking players to grab a share of the market.

According to The State of the Startup Ecosystem Report by Inc42, India currently hosts 300 coworking spaces with a total of 720 centres and a total area of 15 Mn sq ft. Some of these are run by major players such as WeWork, 91springboard, Innov8, Cowrks, and Awfis. After being adopted in Tier 1 cities, the trend is now spreading its wings to Tier 2 and Tier 3 cities as well.

As Yogesh Arora, director and cofounder of AltF CoWorking, shared, foreign competitors such as WeWork have made an impressive impact, but in the premium segment only. Local players dominate the mid-range segment, which holds the major share of the market.

As a part of the Inc42 and Amazon Web Services (AWS) series — Hidden Ecosystem Champions — we connected with a few such coworking players including SproutBox, myHQ, AltF CoWorking, GoHive, GoWork, Yessworks, and Ideashacks, to understand how they are creating a difference in the lives of budding entrepreneurs and startups.

Even as international coworking companies that offers huge, plush spaces and world-class facilities cater to well-funded startups or those with some money to spare, smaller coworking players have quietly been carving out a niche market for themselves. They offer comparatively smaller spaces with not as many frills and fancies, but their lower pricing is attracting startup founders whose early-stage startups require much less workspace and facilities than corporates — sometimes just a desk or two or three.

And they are proving to be a viable option for entrepreneurs who would otherwise have to set up their initial workplace at their homes or garages, thereby helping them set the right workspace culture from the first day itself. At the same time, these small coworking spaces are offering their services across much larger geography, reaching places that are closer in proximity to entrepreneurs.

For instance, myHQ, launched in 2016 in Delhi, offers facilities such as a cafe, lounge, and office space, and provides seats as low as $71.92 (INR 5K) per month, making it one of the most economical options in the industry.

Similarly, AltF CoWorking, which started off with two seats in a basement of OYO in Delhi in 2016, plans to a run rate of $3.44 Mn annually by March 2019. GoHive, on the other hand, started two years ago in Delhi, houses some notable startups of India such as Peesafe and Magicpin.

Ideashacks Coworking, which started operations in 2016, now hosts 200 startups, freelancers, and small and medium enterprises (SMEs). Similarly, SproutBox, which was established in 2015, is home to 34 companies of different sizes.

Some of them are even going beyond basic offerings to provide startups value-added services that help them improve their productivity or help their employees let their hair down. GoWork recently launched GoSocial, a premium bar on its campus in Delhi and is planning to introduce a frustration zone and GoLiving — a sleeping pod concept — to help cope with workforce distress.

A Community Initiative At Heart

Founders of coworking spaces say that coworking was never meant to be just a shared workplace — it is a catalyst in enhancing the growth of startups. But the concept was widely misunderstood and misinterpreted in the initial years. However, over time as the startup industry matured, the definition of coworking too gained maturity and people understood its real significance as a community-driven initiative. It is this factor that became a turning point for the coworking sector.

CEO and chief evangelist of GoWork Sudeep Singh comments, “This transition was bound to happen.” He believes that globally, coworking spaces quickly evolved from just focusing on the real estate aspect to offering a range of premium services to attract more members. The Indian coworking industry is now resonating this trend.

According to coworking entrepreneurs, coworking spaces enable and facilitate frequent interactions among members of organisations across industries, thereby helping ignite ideas and productive discussions. This is the real value-add of coworking spaces in the professional lives of its members.

SproutBox cofounder Gagandeep Sapra says, “We believe the community is the heart of a coworking space.” On a similar note, the founder at Gohive, Mishu Ahluwalia, adds that creating a community is the key make or break factor while setting up a coworking centre. It is important to engage in active community-building exercises aside from designing one’s space smartly.

Apart from the community aspect, coworking spaces focus on enhancing the well-being of their members and helping them cope with stress. To this end, they organise in-hub events such as movie screenings, food-a-thons, etc, which work like wonders to get the community chatting and coming out of their shells.

myHQ, for instance, along with organising regular community events and meetups, organises beer mixers, football matches, one-on-one pitching sessions with leading VCs in the country, and AMA sessions with industry experts. “At some of our spaces, we often offer beer for INR 99 on Fridays post working hours to encourage members to network and collaborate,” says Vinayak Agrawal, cofounder of myHQ.

Moving forward, Indian coworking companies will grow on the hospitality-driven model as they continue to innovate and provide an increasing array of services. This will be a prime factor in determining which players achieve a greater market share, adds Singh.

One of the major challenges coworking spaces face is setting up their branches at the right location where there is the right demand and offering the right price. Once that is sorted out, the crucial aspects they need to look into are the physical design of the hub and meeting client expectations, especially for corporates.

Ideashacks founder Arjun Veer Chadha believes that it is essential to gauge the demand correctly and understand it before the potential audience starts becoming members. Moreover, one should have a clear concept of the design of the hub, and the value it will add to the potential community. The last and most important step is planning ahead to ensure that the right community is created at the hub.

In a country like India where coworking is still a relatively new concept in many areas, especially in Tier 2 and Tier 3 cities, entrepreneurs also find it difficult to explain the idea to property owners and stakeholders.

“Minimising the time of execution of every single property from finalisation to due diligence to furnishing is another challenge,” explains Arora.

Is The Playing Field Levelled?

While some may consider the entry of deep-pocketed foreign counterparts like WeWork a threat, many others see it as a big advantage. As Singh says, “It only helps the overall industry offer more enriched services. With more competition, homegrown players will be encouraged to provide more services of global standards and get to know the demands of international clients as well.”

Most local players are playing their game on the price front, putting out the most economical options in the market, thereby reaching for the right product-market fit for the Indian audience.

“Increasing competition has not majorly impacted the industry as yet because of the increase in demand with an equal force in the past few years. And to maintain a stable balance in the demand-supply chain, homegrown players have emerged,” says Arora.

The Next Big Thing In India’s Evolving Workspace

Agrawal believes that in today’s hyperconnected world, working from a centralised office space has more to do with habit than a necessity. With the advance of technology, the world has come to one’s smartphones and other devices. Physical presence is getting overruled by video calls, emails, messages, and social media communication processes.

Industry experts believe that a distributed workspace setting also makes it possible for people to meet more people, collaborate, and share new ideas. It leaves people with more time work to do things that are important to them instead of spending it commuting to work.

Here are a few trends observed by the early-stage coworking founders Inc42 spoke to:

Small, homegrown spaces are a boon for startups looking for cheaper coworking options. Slowly but surely, they are making a mark and doing their bit to enable the startup ecosystem in India. Jones Lang LaSalle (JLL), one of the world’s largest real estate brokerage companies said that by 2020, 13.5 million Indians will operate out of coworking facilities. Asia’s coworking industry is growing nearly forty percent more quickly than in North America, and at nearly double the pace found in Europe, JLL added.

“The workplace of the future will be an essential microcosm of society that is connected, convivial, commercially viable, culturally aware and collectively responsible.”

And these hidden ecosystem champions are leaving no stone unturned to create this workplace of the future.