According to estimates, doorstep auto repair and maintenance startup’s operations were affected the most with the onset of the pandemic

With a focus on brand marketing and expansion plans in 20 cities, Hoopy recorded its highest-ever revenue in March 2021

Based on the new partnerships it has forged and the expansion plan, Hoopy aims to generate $4 Mn revenue in FY 2021-22 and complete more than 4 Lakh services

Since the onset of the pandemic sectors such as travel and tourism, automobile, electric vehicles, and retail have suffered massive losses. Even amongst these, Statistica estimates that the automotive market suffered the worst brunt. A Research and Markets’ report pointed out that the global automotive repair and maintenance industry’s revenue declined by almost $2 Bn during the initial days of the pandemic as most vehicles went into the dormant mode with the lockdowns.

In India, the situation was worse considering how unorganised the segment is, which resulted in the loss of income for the unstructured mechanic and garage market. The unregulated pay structure for mechanics and volatile assets for the garages resulted in a critical financial situation for the segment. The import of automobile components falling by 18% was bad enough, but what made it worse was more than 3 Mn workers employed in the sector were left struggling without a job.

The situation has adversely affected the two-wheeler doorstop repair and maintenance startups such as GarageWorks, GoBumpr, Autobrix, and Hoopy as well. Startups such as these which had been working with unorganised auto mechanics service providers also had to revisit their models in the wake of the pandemic.

Shashank Dubey, cofounder of Hoopy, said, “Even post-unlock we saw days with zero bookings. Our revenue and operations fell. The senior management and founders stopped drawing salary to keep the business afloat.”

Founded in 2016 by Dubey, Abhinav Shrivastava, and Vedic Choubey, Hoopy is one of the handful of startups looking to disrupt the auto repair and service industry by addressing the pain points such as inconvenience, varying price and service quality, and unregulated bills which are typically faced by consumers in local garages.

The biggest challenge was ensuring sustenance and income for the mechanic partners while keeping the business afloat, even as operations shut down for the entirety of the lockdown from March 25, 2020.

The pause allowed Hoopy to think about reworking multiple aspects of its operations. The company forayed into digital and offline channels of marketing to improve brand awareness and prepare for things to open up. During this time, Hoopy also revamped its website to bring the focus on relevant information for customers to fasten the booking process. It also formed strategic partnerships with major automobile industry players such as Shell and used cars and bikes marketplace Cars24 to give a boost to its operations.

On the backbone of these plans, the startup is confident that it will generate $4 Mn revenue in FY 2021-22 and complete more than 4 Lakh service orders. As for this year, Hoopy has reached an ARR of $1 Mn in March 2021. As a result of its efforts, the startup clocked the highest revenue since its inception in March 2021 — reporting more than  $84K in revenue in the month.

How Hoopy Forged Partnerships To Survive And Thrive

To counter the problem of keeping the business afloat when customer orders had plummeted while also ensuring that mechanic partners are not suffering too much of income loss, Hoopy decided to double down on partnerships. It tied up Freshworld and unicorn Cars24 to bring more customers under its service umbrella. It partnered with grocery delivery platform Freshworld to convert its mechanic partners into delivery executives. The startup also began raising donations from customers to support mechanics through platforms such as Give India.

The next step was to ensure the operations returned to normalcy when things opened up again and scale up to maintain the new growth trajectory.

In order to get out of the slump post the lockdown, Hoopy partnered with energy and oil giant Shell in August 2020. The high-profile association helped Hoopy recover its business and get to more than 200+ bookings per day. “We have seen a 1200% increase in the number of bookings since September and it is growing every day,” Dubey revealed. He further claimed that the partnership enabled the mechanic partners to earn 40% more than the standard earnings of most garages and workshops. 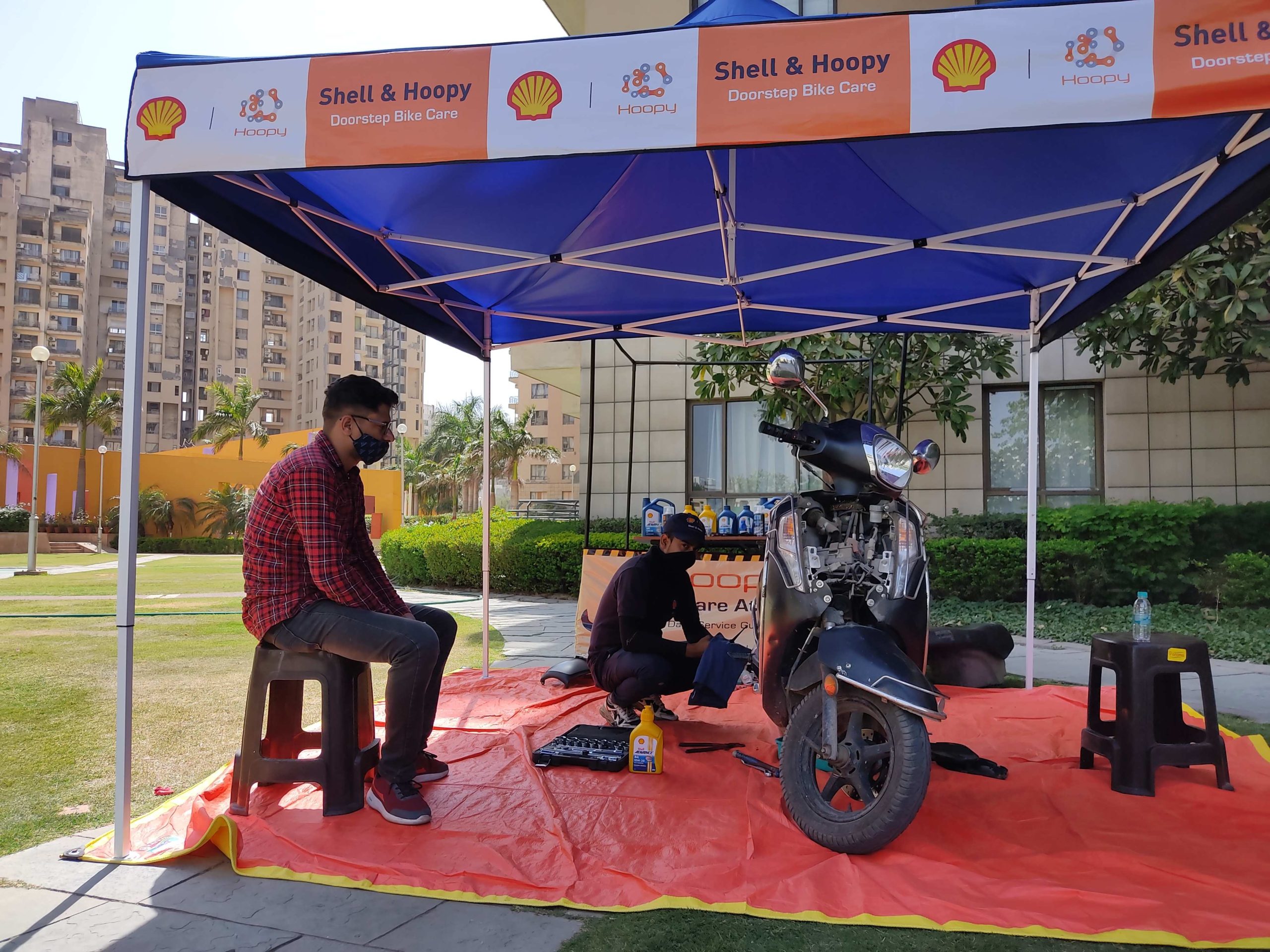 During the months of lockdown from March to July, the startup went back to the drawing board and analysed ways to improve its business. As a first step, Hoopy revamped its website, to make it more informative and user-friendly for customers as well as mechanic partners.

It also made a decision to focus more on D2C operations instead of going fully B2B. The company marketed its new-look platform extensively both digitally and through offline banners, something which it had not previously focussed on. As a result, the overall impressions on the website grew from 1K per month in November 2020 to 100K in March 2021.

The company also put a focus on upskilling its mechanic partners through cross-skill training to be able to handle any problem during the repair process as well as soft-skill training to improve customer service experience. Through its various outreach programmes, the company is looking to add 200 more mechanic partners to its existing roster of 100.

“We are committed towards the mechanic community and want to give more opportunities to people from regions of less opportunity. Aligned with this goal we partnered with various skill development centres and NGOs to provide basic training to people from rural areas and tribals. Post the training, we started onboarding them as our mechanic partners,” Dubey told Inc42.

Revving Up Towards Expansion

Currently, operational in five cities Bengaluru, Hyderabad, Gurugram, Noida, and Delhi, Hoopy aims to expand its services in over 20 cities in the next two years while also adding new services tiers and features.

For its expansion into new cities, it has also started onboarding ecosystem partners who could provide the right support. For instance, it joined hands as refurbishing partners with resellers when it expanded to Gurugram and Noida. The collaboration helped the startup in ensuring a constant supply and presented a direct funnel into the high ticket market.

While its growth ambition will have to be balanced against the rise of competition, especially considering the price-sensitive audience in Tier 2 and 3 cities, the startup plans to first tap into the millennial audience base and then move to users that are not yet tech-savvy. “In the future, we see ourselves partnering with most of the OEMs so that we can service their vehicles using their own spare parts and toolkits.”

So what will be the thing that sets Hoopy apart in a market with 5-6 players with similar amounts of growth capital? Dubey said that Hoopy’s reliance on technology to solve problems in growth and scale strategy will be the key difference. “We are using AI to skip the manual route, and transferring every step of action online so the delays caused by human interventions can be avoided. Currently, we are in the A/B testing phase of curating different prices, particularly for different cities. We intend to leverage this streamlined procedure and scale it in order to expand via removal of human logistics and repetitive decision making.”