Flipkart Vs Amazon India: Who Won The Indian Ecommerce Battle In 2018?

Flipkart Vs Amazon India: Who Won The Indian Ecommerce Battle In 2018? 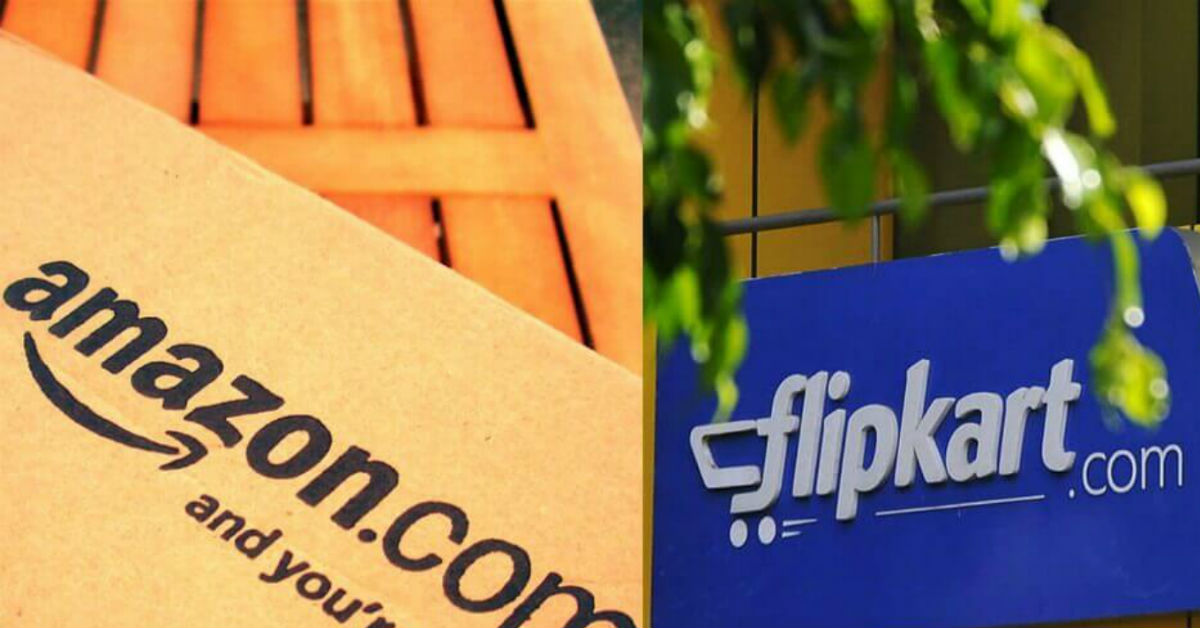 Amazon India, has overtaken Flipkart with $7.5 Bn in GMV in FY18: Barclays report

Flipkart continues to be bigger than Amazon in terms of revenue ($3.8 Bn vs $3.2 Bn)

For the festive sale days, Flipkart accounted for more than half of the GMV of the entire ecommerce industry: Redseer

The year 2018 brought an amazing upturn to the Indian ecommerce sector. Flipkart is now a Walmart company, which means that the earlier debate on Amazon having an edge as it is a deep-pocketed player is now over.

Both companies have been extending their arms in similar directions such as digital payments, groceries, and private labels, among others. Whether it’s logistics, fulfilment centres, or technology, both Amazon and Flipkart have been expanding aggressively with a view to dominating the Indian ecommerce sector.

As the year approaches its end, analysts such as Barclays, Redseer, and Counterpoint Research, among others, are busy analysing the answer to the big question: Who won the Indian ecommerce battle 2018: Flipkart or Amazon?

Overall, this year’s ecommerce battle was a close one, with neither company emerging as a clear winner. While Amazon led in GMV at $7.5 Bn, Flipkart was not too far behind if the GMV of its fashion subsidiaries Myntra and Jabong are counted. Flipkart, meanwhile, notched up a higher revenue and led in smartphone sales.

Here is a detailed comparison across some key parameters:

Flipkart, meanwhile, had a GMV of $6.2 Bn on a standalone basis (excluding its subsidiaries Myntra and Jabong). If these fashion units are included, Flipkart is neck-and-neck with Amazon India in terms of GMV.

Also, it’s worth noting that India contributes only 2% of Amazon’s global GMV. “Admittedly, in the current tape where investors are de-risking for other reasons, the 2% of GMV that comes from India isn’t going to move the needle on the narrative,” said Barclays.

“Flipkart continues to be bigger than Amazon in terms of revenue ($3.8 Bn vs $3.2 Bn), although Amazon is catching up quickly and continues to grow much faster (82% vs 47%),” the report said. Its operating losses could be in the $1.5 Bn range for the year ending January 2020, it added.

The report also noted that Amazon is rapidly increasing its investments in its India unit (India represents 7% of Amazon’s international retail operational expenses in the calendar year 2018).

For the festive sale days, a Redseer analysis shows that Flipkart accounted for more than half of the GMV of the entire ecommerce industry. Between Flipkart and Amazon, the sales GMV share was 62% and 38% respectively. Flipkart’s higher share was driven by its substantial sales figures in mobiles and fashion verticals.

With India accounting for around 300 Mn smartphone users and 460 Mn internet users, the ecommerce platforms registered a massive 46% Y-o-Y growth in sales volumes and contributed to half of the overall sales in the country, according to Karn Chauhan, the research analyst at Counterpoint.

He said, “Flipkart stood out due to the most number of exclusives while Amazon benefitted some from the launch of OnePlus 6T.”

This growth is said to be driven by factors such as rising internet penetration, diverse payment options, and growth in delivery infrastructure, among others. Going forward, with millennials being extremely well-informed and discerning consumers, the upcoming strategies of these companies will play a key role in ascertaining who dominates the market.

With the Flipkart cofounders out of the company’s mainstream operations, Walmart plans to play the Indian ecommerce market with its own rules, with the aid of showrunner Kalyan Krishnamurthy, the current Flipkart CEO. Amazon India, meanwhile, continues to invest heavily in the country despite on the loss front. This year, Paytm Mall emerged as a distant third competitor but is eyeing the top slot with its aggressive sales strategy. Paytm Mall is backed by Chinese behemoth Alibaba.

With so much happening in the sector, the Centre is keen to roll out the final guidelines for the draft ecommerce policy. If passed in its current form, the policy takes a tough stand on matters such as GST, TCS, FDI, and the massive discounts offered by ecommerce platforms, particularly during the festive months.

With a new year almost upon us, will Amazon India maintain its prime position or be ousted by the Flipkart-Walmart combination? Will Paytm Mall be successful in gaining a substantial share of the market. Or will we see the rise of new or existing players such as Snapdeal, which claimed profitability this year?

Whatever the case, in 2019, as in 2018, ecommerce’s fab duo — Amazon and Flipkart — are expected to continue their battle of one-upmanship in Indian ecommerce.

[With inputs from Bhumika Khatri]