Fintech In A Sachet: How Startups Are Building Bite-Sized Products To Boost Inclusion

Fintech In A Sachet: How Startups Are Building Bite-Sized Products To Boost Inclusion 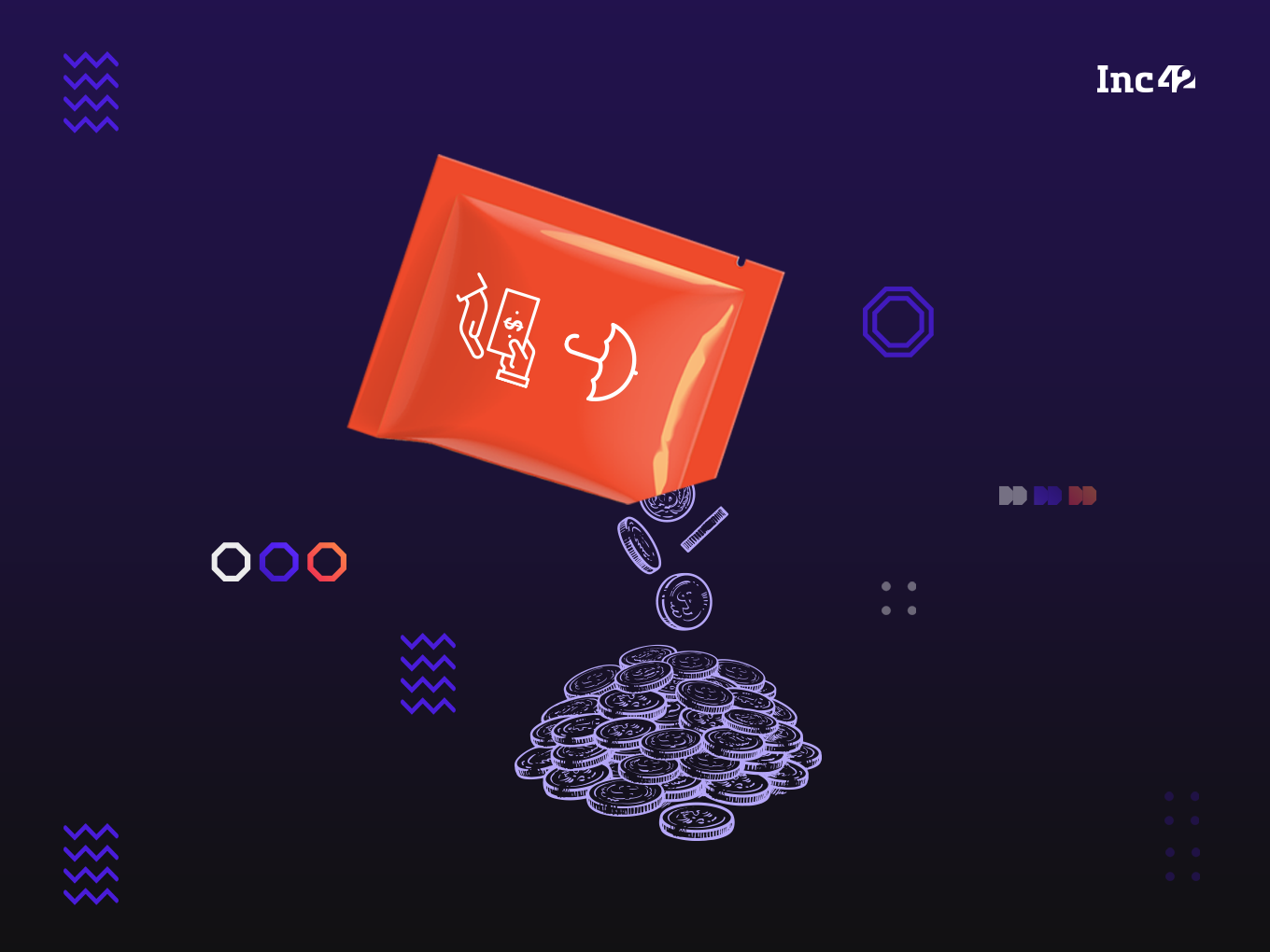 While India is recognised to be a huge market, almost 80% of it is untapped and not well served with traditional financial products, said Razorpay product head Khilan Haria

The attributes of a sachet, in terms of being small in size and therefore possibly frequently used, creates a very different engagement bond between the customer and the seller

In India, the top of the pyramid is already well-positioned economically and benefits from credit, investment and other financial products. As we go beyond this top tier of 100 Mn – 150 Mn and outside the Tier 1 cities and metros, the purchasing power parity dips significantly below the average per capita GDP. This underserved population is the driving force behind some of the biggest innovations in financial services and fintech.

While India is recognised to be a huge market, almost 80% of it is untapped and not well served with traditional financial products, said Razorpay product head Khilan Haria.

This mismatch of course has played out in other segments, and has already been solved to a large extent in FMCG brands — with shampoos being the prime example.

Given India’s low per-capita income, bottles of shampoo were unaffordable for many consumers in smaller towns, while the distribution of such large packages was also a hindrance for companies. The solution emerged in the form of a plastic sachet. Shampoos sold in sachets worth INR 1 are now such a ubiquitous sight that it’s hard to imagine this was a major challenge at one point.

So can similar bite-sized sachets bring the underserved audience to the fintech fold? That’s what fintech startups across the various financial services sub-sectors are looking to prove.

Armed with bite-sized loan and insurance products, fintech companies are proliferating to the under-served Bharat audience on the back of infrastructural moats such as UPI and Aadhaar. This is also helping drive up financial inclusion of a population that has not been able to avail loans and insurance products that were primarily designed for the more well off Tier 1 audience.

Rise Of The Sachetisation Model

Perhaps the best example of sachetisation in fintech is seen in the lending sector. From being a long-drawn process, credit disbursal from new-age lenders has become instantaneous as ticket sizes have reduced and targeting has sharpened. The innovative models for small unsecured loans based on proprietary credit rating mechanisms or alternative data have changed the credit market in India and brought on a wave of startups and even consumer companies.

The problem with the traditional credit rating system is that it outrightly disqualifies a large section of the so-called Bharat population who do not have a credit history or financial documents or collateral. As a result, this massive group of 300 Mn has remained outside the formal credit market. 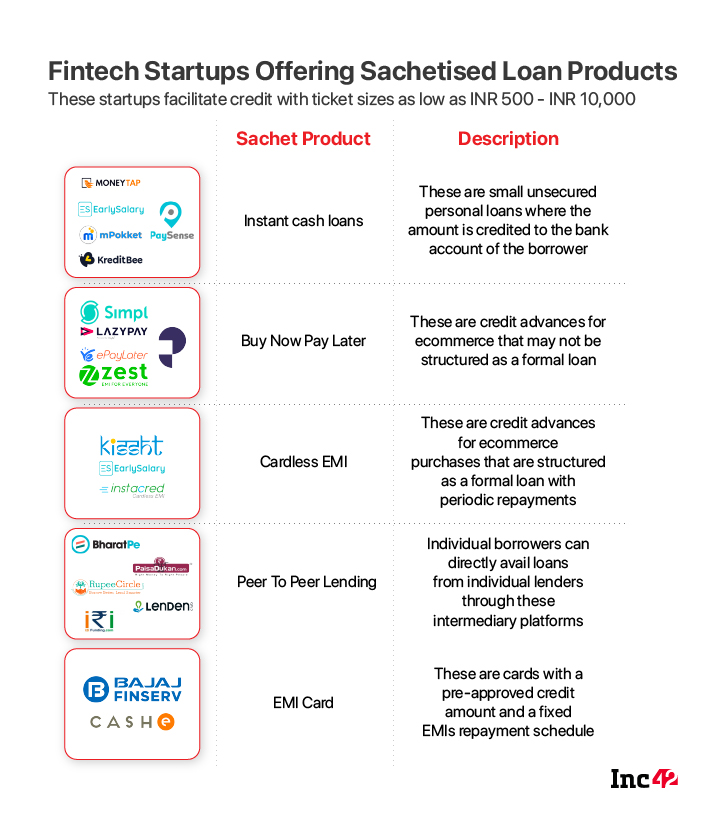 Digital lenders such as MoneyTap, ZestMoney, MoneyView, Navi, BharatPe, Shubh Loans, Lendingkart, and Capital Float, among others are customising credit products for consumers and SMBs with greater frequency.

Not to be left behind, the insurance sector has also been dipping its toes in sachetisation. One major departure in this space is that even legacy companies have started offering policies that cost as low as INR 200 – INR 300 in monthly premiums.

The biggest change has come in low-premium policies for niche areas. Acko and Digit are the two most prominent insuretech players in India and also have customised policies for consumers. Besides these two, startups such as Toffee, PlumHQ, Onsurity and others are also active in this space.

While insurance tech has not seen too many digital-first businesses due to the various challenges in this sector — including the reliance on human capital — on the digital lending side, there are plenty of players. Both Acko and Digit have created sachet products for insurance covers for hotel stays, smartphone damage, TV repair, and short flight delays.

Vivek Chaturvedi, chief marketing officer, Digit Insurance told Inc42 the idea is to find the product-market fit for niche categories. “We launched a sachet flight delay cover that covers delays beyond 75 minutes, unlike the industry standard of 6 hours. With this we targeted a real pain point”.

Despite these efforts by tech startups in providing insurance for interesting sachet products, it’s the distribution side where fintech companies have actually shaped the insurance market by forcing legacy providers to enter the sachet territory. 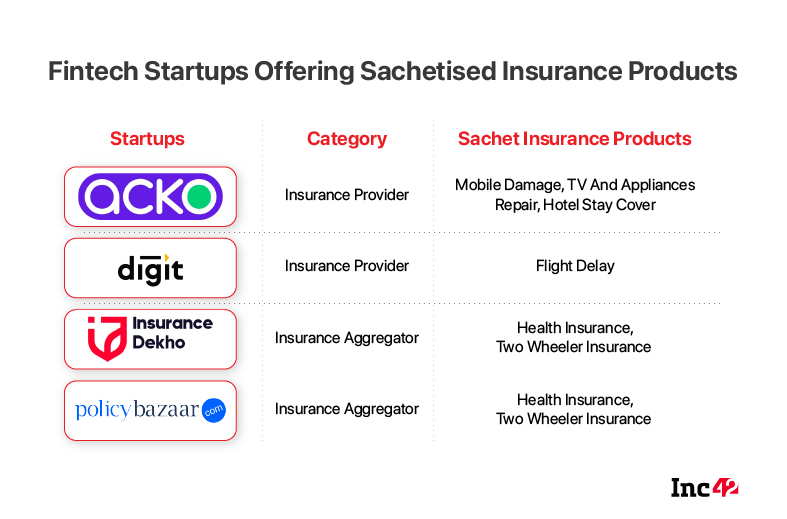 In the last few years, the country’s Tier 2 and 3 population has become well-versed in the ways of using social media platforms such as WhatsApp, Facebook and TikTok, and ecommerce platforms such as Flipkart and Amazon. This has made this audience more digitally savvy, but that does not extend to financial services.

To bridge the trust deficit and lack of awareness for first-time adopters of financial products digitally, it is critical for a fintech startup to ensure that customers feel reassured and don’t get nasty surprises, according to ZestMoney founder Lizzie Chapman.

“We follow a design principle of “affirmative design” which means we try to make our UI and UX feel reassuring and calm. At the end of the day, we are dealing with people’s money and that can be very emotionally charged,” she added.

According to Chapman, 70% of the customer base could be said to be from the Bharat market at ZestMoney, a platform that offers buy now pay later options at the checkout stage of etailers such as Flipkart, Amazon and Myntra, among others.

Apart from clear communication that simplifies the product and its benefits, vernacular and voice-driven experiences will have to be built and experimented with to scale sachet products. “As far as possible, iconography should be used to eliminate the need for language in the UI”, said Ashneer Grover, cofounder and CEO of BharatPe, which has designed a sachet-sized easy daily installments (EDI) repayment plan.

For these factors to be adequately provided for by the product team, product managers have to treat product validation before launch as a separate stage from the building phase, according to Khilan Haria, Razorpay’s head of products. Further, keeping an eye on customer feedback after going live and measuring customer satisfaction metrics are essential.

“It’s important not to be biased with existing solutions and design methodologies as what’s a norm with another segment might be a new behaviour for this segment,” Haria, who will be speaking at Inc42 and TPF’s The Product Summit in October, told us.

A key challenge while innovating financial products for the Bharat audience is ensuring the security of their money — first-time users might be driven away if they lose money or feel they have been duped. This would mean testing the products in controlled environments like regulatory sandboxes where users and regulators have consented to try out an innovation.

Even if the major fintech players in the Indian market wish to invest in greater sachetisation and hyper-customisation of their products, they could be deterred by regulatory hurdles.

“Under the current regulations, fintech players cannot allow their users to use mobile wallets as per their needs. These regulations need to be updated,” said Nityanand Sharma, CEO and cofounder of Simpl, a startup that offers buy now pay later options at the checkout stage of apps such as Zomato, BigBasket, Dunzo and 1mg.

Sharma also believes that India needs clearer laws when it comes to areas such as e-KYC and video verifications to pave the way for greater adoption of sachetised products. “This becomes extremely important in locations that are not well-connected,” he added.

Former RBI Deputy Governor Viral Acharya had made two key infrastructural recommendations in a 2018 RBI report that would go a long way in solving the KYC problem if implemented.

The first of these is the creation of a public credit registry (PCR) that he said would be a comprehensive database of information for all credit relationships in the country, from the point of origination of credit to its termination — encompassing details such as repayments, restructuring, default and resolution.

The second was the creation of a public aggregator of financial data that can enable users to demand their data from their financial services providers in real-time, in a machine-readable format. The account aggregator is expected to revamp the banking system and the credit market.

Another regulatory gap has been fleshing out specific regulations regarding authorisations and registration requirements for the buy-now-pay-later (BNPL) segment of digital lenders.

“In such a scenario, BNPL players may find it difficult to customise their products according to local markets. There also needs to be more clarity regarding areas such as the classification of BNPL players as intermediaries,” added Simpl’s Sharma.

While the RBI has been prompt in responding to a lot of issues in the fintech sector, insurance regulator IRDAI still has a lot of catching up to do.

According to Digit’s Chaturvedi, more flexibility in terms of policy terms and conditions are required to allow a variance from the traditional tariff structures. “Modularity and flexibility in product terms, exclusions, pricing, etc would help companies in building more sachet products,” he added.

Successful sachetisation dramatically pushes up growth, according to MoneyTap founder and CEO Bala  Parthasarathy. “Our app-based credit line has helped us disburse over INR 2,500 crore per year of sachetised credit,” he adds.

After unlocking scale with a sachetised product, managing the cost structure is of utmost importance — the strategy for any sachetised product should be to multiply thin margins with high user volumes. For instance, the telecom boom of the 2000s was driven by small prepaid cards that the Bharat audience lapped up.

“Given India’s high cost of acquisition, pricing the products needs to be just right.  If the pricing is too low, it will be a money loser. Pricing it too high will defeat the purpose of sachetisation,” said Parthasarathy.

The trick is to keep the cost of acquisition reasonable and heavily use tech and data, so that the risk can be managed.

One of the challenges with sachet products for an insurer is the customer acquisition cost in relation to the premium, added Acko’s Ramaswamy. “As a result, sachet products are usually distributed via B2B2C arrangements, rather than directly by the insurer,” he told us.

Small ticket or sachet products are best sold by bundling with the main product that the person is buying. The objective is that it should not require any further effort from the customer to buy this product in the customer journey.

The attributes of a sachet, in terms of being small in size and therefore possibly frequently used, creates a very different engagement bond between the customer and the seller.

“To achieve hypergrowth, such bonds need to be carefully engineered, nurtured and leveraged as part of an overall data and metric driven strategy,” said Ramaswamy.