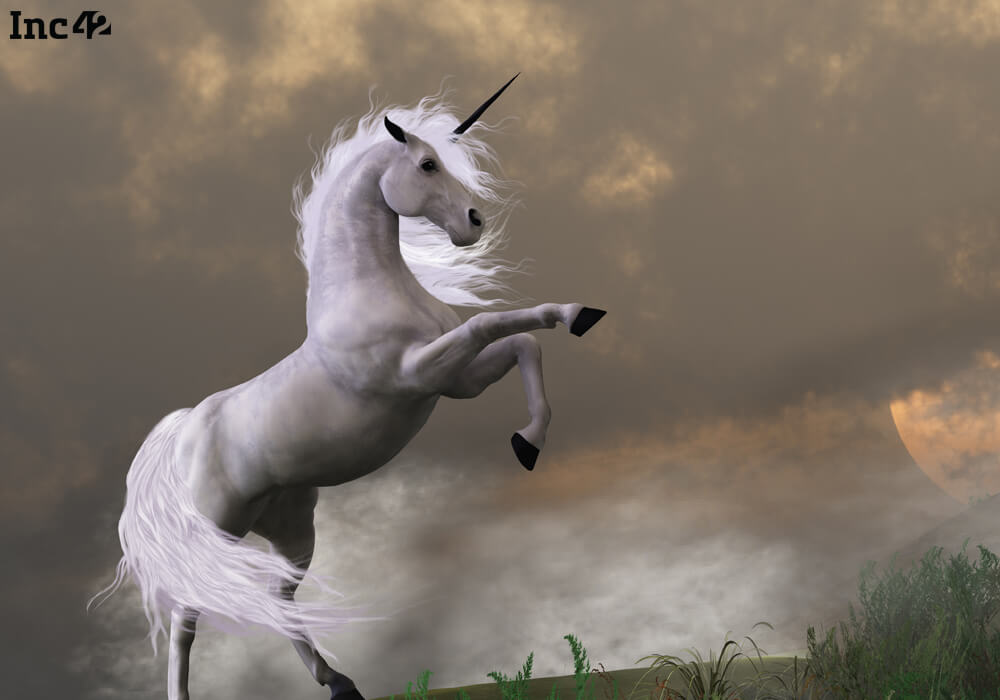 This article is an extract from Inc42’s recently released Annual Indian Tech Startup Funding Report 2017 which provides a meticulously detailed analysis of the funding trends, potential tech startups to enter the unicorn club in the Indian startup landscape, and Merger & Acquisitions (M&As) in the Indian startup ecosystem for the period 2014-2017. To read more articles of this report, click here.

The Indian unicorn club, which currently has handful startups (12 to be exact), is expected to expand on a massive rate to add at least 34 new tech startups under its wings by 2020, reveals Inc42’s annual Indian tech startup funding report 2017.

As per the report, India is currently breeding over 100 such tech startups which are expected to smoothly sail into the billion-dollar club. With a bird’s eye view of the Indian startup ecosystem, Inc42 Datalabs team has further shortlisted 34 Indian tech startups that have a high chance of becoming a unicorn by 2020.

Out of the total 34 startups, nine startups fall into the ecommerce category, followed by logistics which has six potential unicorns under its head. Then comes fintech and enterprise tech, which has five soon-to-unicorns each.

A broad geographical split of these soon-to-be-unicorns reveals that most of these tech startups – around 12 – are based out of Delhi/NCR. Both Bengaluru and Mumbai are breeding five budding unicorns each.

BigBasket: With a total funding of $585 Mn, BigBasket is presently the top contender to enter the unicorn club, with an estimated valuation of $900 Mn. With a dominant position in the Indian online grocery segment, BigBasket recently secured $196 Mn from Alibaba and is also reportedly in talks with Paytm Mall to integrate its services.

OYO: SoftBank-backed OYO is currently engaged in strengthening its position in the budget hotel segment. While the company has introduced premium features like OYO Asset and OYO TownHouse, it has also adopted the franchise business model and has expanded its presence in tier 2 cities like Lucknow. As per reports, OYO’s valuation surged to $460 Mn, post its $250 Mn funding round in September 2017.

Delhivery: Delhi/NCR based Delhivery has so far raised $257 Mn in funding from a clutch of investors. The startup raised its last round in May 2017 at an estimated valuation of $650 Mn.

BYJU’S: After cementing its presence in the Indian K-12 and test preparation market, BYJU’S is currently exploring expansion into the international markets through the acquisition route. With a total funding of $244 Mn, BYJU’s was valued at $800 Mn during its last funding round, which was led by Tencent in July 2017. The company also counts Sofina, Sequoia India, Verlinvest and IFC as its key investors.

CarTrade: Mumbai-based CarTrade is one of the leading names in the Indian online automobile classifieds space. The company has so far raised $240 Mn in funding. Post its merger with Carwale.com in 2015, the company claims to have about 15 Mn unique customers per month. Also, it recently acquired a majority stake in Shriram Automall to create India’s largest online vehicle transaction platform. The company last raised $55 Mn in February 2017, however, the valuation details remain undisclosed. 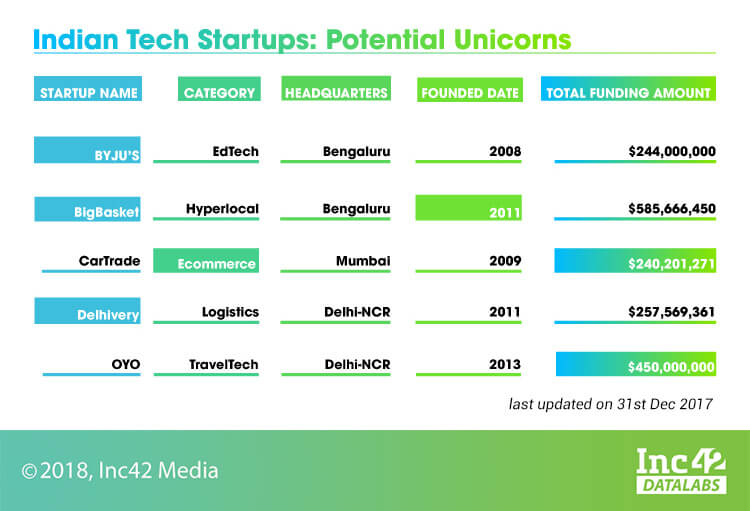 The existing Indian unicorns had an interesting past few months. While some grew exponentially, others fell into huge losses. On the one hand, Snapdeal suffered a near-death experience during the merger deal with Flipkart. On the other hand, foodtech startup Zomato rose from ashes like a ‘phoenix’ and proclaimed its profitability. Flipkart became a SoftBank favourite and raked in about $2 Bn funding from the Japanese investment behemoth.

Paytm turned into a decacorn a few weeks back, when it declared that its valuation has reached $10 Bn. This clearly indicates the substantial progress company made in the previous year. Hike and Zoho continued with their stream of innovative products, while Ola gained another funding round from SoftBank and also announced its international foray.