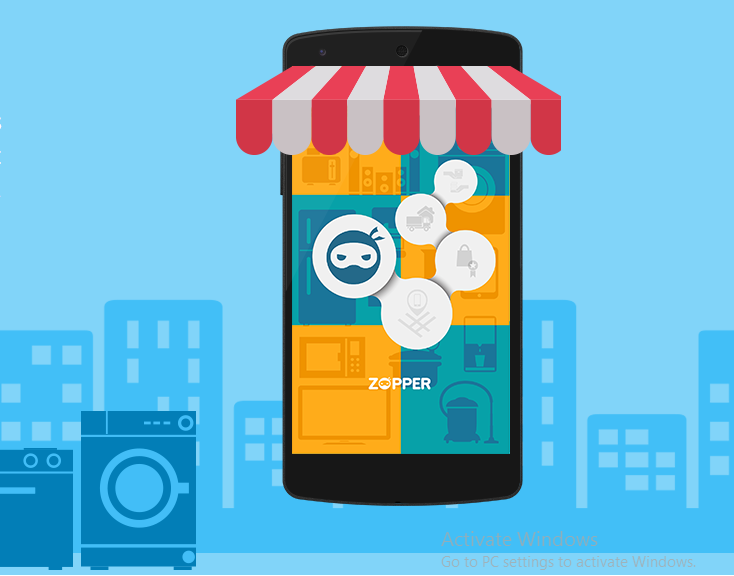 Impact of Hyperlocal delivery startups on ecommerce is not very different from the impact that ecommerce had on local retailers. Ecommerce Giants (such as Flipkart and  Snapdeal) which once disrupted the brick-and-mortar retail with their wide range of products and alluring discounts, are now facing heat from the  Hyperlocal ventures (like Grofers and Zopper) who are now working to disrupt the shopping space.

Hyperlocal ventures have created an amalgam of online and offline retail by bringing back the trust and quick delivery of offline market without losing the convenience of online shopping. They are delivering everything from groceries to mobile phones to medicines, directly from the stores near your home. It’s like having your very own shopping assistant who responds at the click of a button.

One of the game changing hyperlocal venture, Zopper which has recently raised $20Mn in a Series B round funding from Tiger Global and Nirvana. New Delhi-based Zopper is  a hyper local mobile marketplace, founded by serial entrepreneurs Surjendu Kulia and Neeraj Jain in 2011. In October 2011, company received seed funding from Blume Ventures and Ventureast and the Pre-Series A round came from Nirvana Ventures and Blume Ventures in January 2013. In June 2014, Zopper raised $5 Mn from Tiger Global and Nirvana Ventures in the Series-A round.

Although hyperlocal delivery space has seen large number of startups being launched, but there are variety of factors which keep these players a bit different from each other. What differentiates Zopper from other players is this that it is the only player in the consumer durable segment. They offer real time price discovery to consumers to help consumers choose the lowest available price in the nearby stores. The delivery is done by merchants and thus consumers have full knowledge about the seller and their location, in any case of malfunction.

This new investment will be utilized to expand its brand presence across 30 cities over the country (starting with Jaipur and Chandigarh), hiring and technology development.

Zopper faces major competition from the upstart players like Flipkart and Snapdeal.

The hyperlocal delivery startups can be divided into two segments based on their approach i.e. Store-first like Zopper and Grofers and on the other side, Product-first such as PepperTap and Zopnow etc

Grofers partners with local merchants such as chemists, bakeries, grocery shops, organic food retailers etc to facilitate the delivery of  their goods at the required destination. Grofers has seen three rounds of funding in just six months, valuing the company at $115Mn.

Product-first companies include players like  Zopnow, PepperTap, and JiffStore. Just a month back, Bangalore based online grocery startup ZopNow had raised $10 Mn in a funding round led by San Francisco-based Dragoneer Investment Group, along with its existing investors including Accel Partners, Qualcomm Ventures and Times Internet also participated in the round. This round valued the company at over $50 Mn.

Following this, another hyperlocal grocery delivery services startup based in Gurgaon, PepperTap raised Series A funding of $10 Mn from SAIF Partners and Sequoia Capital.  Jugnoo is also a hyperlocal marketplace to provide everything on-demand using auto rickshaws as a logistics engine for A2B transport and Value Added Deliveries. It recently closed a seed round of $1 Mn from Rakesh Mathur (Junglee, Flywheel), Vikas Taneja (previous investments in Rapportive, PubNub, etc.) in April.

It was a time when online retailers had challenged the traditional brick and mortar store with comfort of shopping which it provides to the customers. But today, these ecommerce ventures have started feeling the heat from these hyperlocal delivery startups. This space became much more interesting when Amazon too kick started on-demand delivery of grocery products in tie up with local mom and pop stores via KiranaNow. The ease and the instant service provided by these startups has attracted customers instantly. Plus the mobile first approach is adding much more to the customer interest.

With the growing internet penetration, smartphone adoption added with investors backing these ventures, this space is going to see much more action in the coming times. The success of the on-demand delivery marketplace model which is in very nascent stage in India depends highly on  efficient execution and approach adopted by the companies.