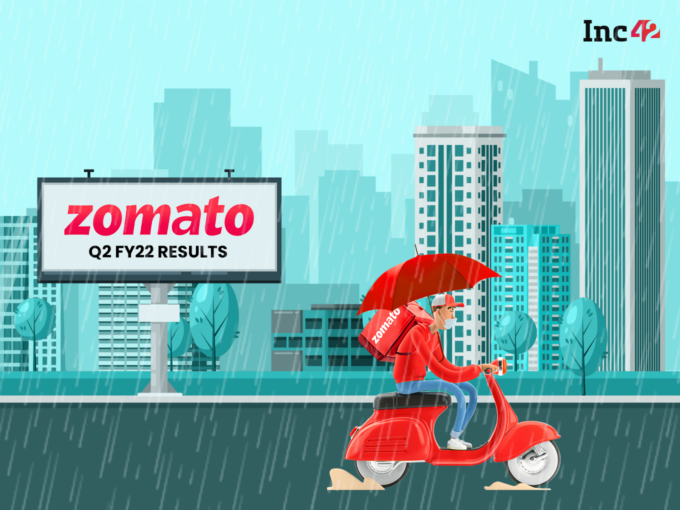 During the same period last financial year (FY21), the foodtech giant had reported a net loss of INR INR 229.8 Cr. 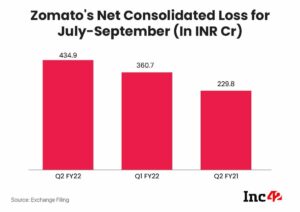 The foodtech giant said that the losses increased due to higher spending on branding and marketing for customer acquisition, increased investments and growing share of smaller geographies and increased delivery costs due to unpredictable weather and increased fuel prices.

“During Q2 FY22, we invested incremental INR 0.4 billion ($5.4 million) in branding and marketing as compared to Q1 FY22. Most of these spends were on television and digital marketing,” it said. During the April-June quarter, its total expenditure was INR 1,259.7 Cr.

Noting that the increase in the expenditure resulted in expanding of its losses, Zomato said in the filing: “We believe this was a great opportunity to double down on expanding our user base cost-efficiently.”

The revenue from operations more than doubled during the period under review to INR 1,024.2 Cr, from INR 426 Cr in the second quarter of FY21 on the back of growth in the food delivery service.

The food delivery Gross Order Value (GOV) in Q2 FY22 grew by 19% QoQ and 158% YoY to INR 5,410 Cr ($721 Mn). This growth was driven by an increase in the number of transacting users, active food delivery restaurants and active delivery partners, Zomato said. 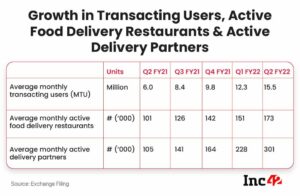 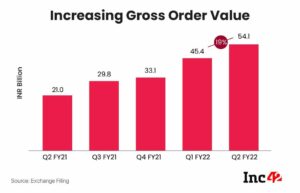 Foodtech giant had listed on the bourses in July with a nearly 53% premium at an issue price of INR 76 per share.

On Wednesday, its shares on the BSE closed at INR 135.75 per share, lower by 1.31% from its previous close. Its market capitalisation stands at INR 1.06 Lakh Cr.

The company said that it will focus on divesting or shutting down any businesses which aren’t likely to drive exponential value for the shareholders in the long term along with investing in its core food businesses and the ecosystem around it and building the hyperlocal ecommerce ecosystem.

The company has shut down four of its international subsidiaries in the past few months. These include Zomato Ireland Limited (Lebanon Branch),  Zomato UK Limited (ZUL), Zomato Media Private Limited (ZMPL) and Zomato US — formerly known as UrbanSpoon.

In August, it had also shut down its US-based table reservation business — NexTable. The list also includes shutdown of online grocery business and health and fitness products business — Nutraceuticals.