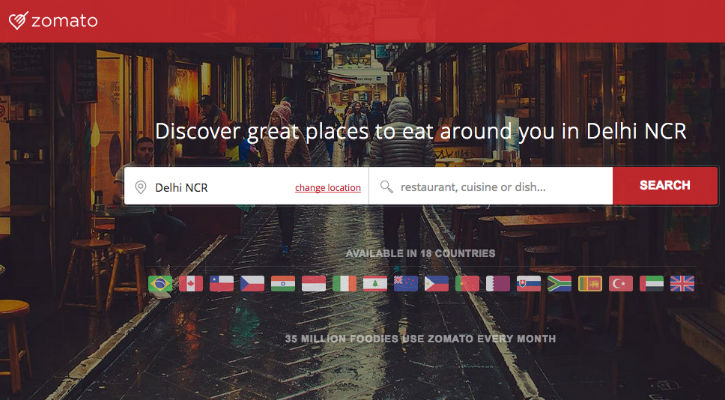 Zomato, amidst rising losses, has recently rolled back its operations from 9 countries out of 23 overseas market, reducing its operating costs to $1.7 Mn, a 81% drop from earlier $9 Mn. This includes the markets of the US, UK, Sri Lanka, Ireland, Chile, Canada, Brazil, Italy, and Slovakia.

However, later zomato clarified that Italy and Slovakia were not effectively core focal markets for them, and they do have on ground teams in both these markets.

With strong presence in India and UAE, it will continue to focus on these markets including others viz. Qatar, Lebanon, Turkey, South Africa, Indonesia, Malaysia, Philippines, Australia, New Zealand, Portugal, Poland, and the Czech Republic.

“We have taken a remote management approach in these markets. We do not have any physical presence, but we will continue to manage the operations out of our headquarters in India,” said, Deepinder Goyal, CEO, Zomato.

The most talked about Indian Unicorn Zomato is going through a rough patch lately. Last year in October, it fired 10% of its workforce. Then, a bitter email from CEO Deepinder Goyal was leaked, criticising the performance of his sales team and predicting lower revenues for the year.

The $60 Mn acquisition of the US-based UrbanSpoon in January 2015 to take on rival Yelp, proved to be an expensive bet. Since then, the company was looking for scaling back its operations in countries not generating enough business to sustain. Also, this year it decided to give minimal or zero increments to employees in India and the senior management has taken a pay cut, as per a LiveMint report. It also shut down its online ordering operations in four cities early this year including Lucknow, Coimbatore, Kochi and Indore. Recently, it was in news this month as HSBC marked down its valuation from $1 Bn to $500 Mn.

Zomato reported a loss of INR 492.27 crore for the year ended March, with a cash burn rate of $9 Mn a month during the first half of last year. Although, the revenue doubled for company in FY16, from INR 96.7 crore to INR 184.97 crore. It also remained profitable in  Lebanon, Qatar, the Philippines and Indonesia, apart from India and UAE this fiscal.

Zomato plans to reach a certain threshold level needed to monetise each operation. It is currently competing in online food delivery market with platforms like Swiggy and Foodpanda. However, considers its online listing platform as a cutting edge over other portals.

“About 80% of the food deliveries for the online ordering business is being serviced by the restaurants and only 20% is done through our delivery partners. We have had a very successful launch of food delivery business in India and UAE.”

It also reports a positive unit economics, making an INR 20 margin in India and INR 50 in UAE on all orders, despite of outsourcing the delivery.

“We are the largest player by GMV by market share in the countries we operate in. Our monthly growth rate of delivery business is about 30% and daily average over the last week 25,000-26,000 per day, with an average ticket size of INR 480”, said Goyal.

Other startups which have scaled down their operations since last year include Tinyowl and Housing. Online marketplace Snapdeal and Pepper tap are also planning to scale down their operations in 5+ cities. The shut down in this space include that of restaurant aggregator Dazo in October and Eatlo Tech Solutions Pvt. Ltd in December.