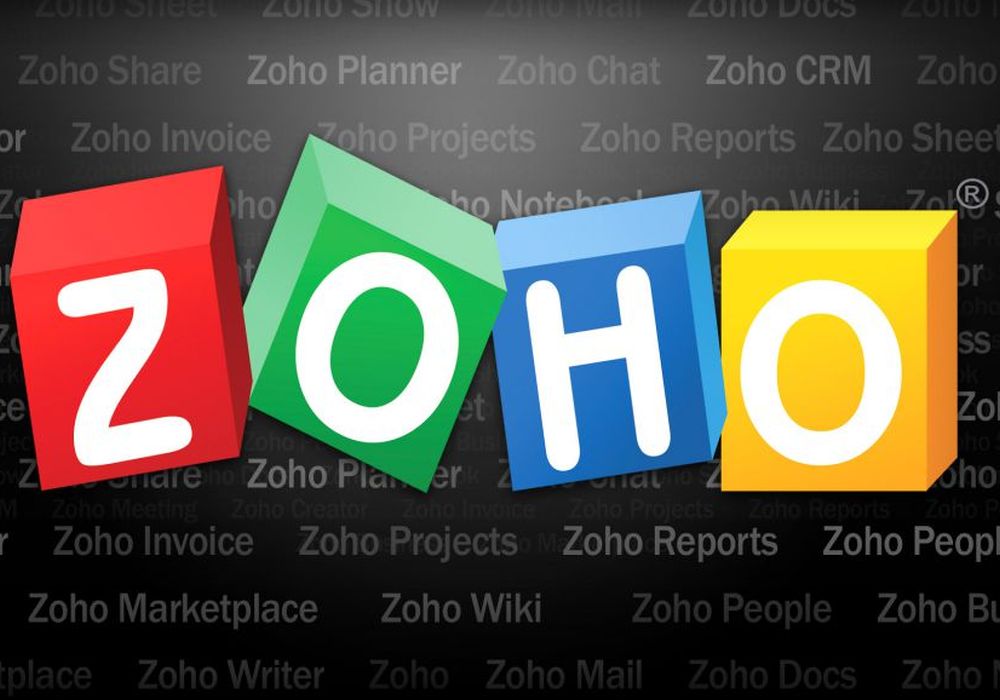 The Newly Launched Application Integrates A Number Of Features Including Video, Audio & Group Conferencing And AI

SaaS based unicorn Zoho has announced the launch of a new service Cliq. As stated by Zoho Corp CEO Sridhar Vembu, Cliq is an instant messenger with video, audio and group conferencing features. The new application is designed to serve as a unified communication system for enterprises.

Available in native, web and mobile versions, Cliq is programmed to seamlessly integrate data from the Zoho platform as well as third-party applications. Furthermore, the Cliq window keeps chat participants up-to-date with the conversation by providing contextual information about the topic being discussed.

Commemorating the launch of Cliq, Zoho Corp CEO Sridhar Vembu said, “More companies around the world are turning to chat for real-time, internal collaboration. But sometimes text isn’t enough, and chat software must also be able handle voice and video communications as well as the documents, images, and other data related to the work at hand. Cliq supports this kind of dynamic, company-wide collaboration. And it provides a degree of future-proofing thanks to its unprecedented extensibility and strong developer community.”

Cliq is currently a part of Zoho One. The feature will soon be added to Zoho’s Workplace, an integrated suite of productivity and collaboration apps, Vembu revealed.

What Does Cliq Offer? 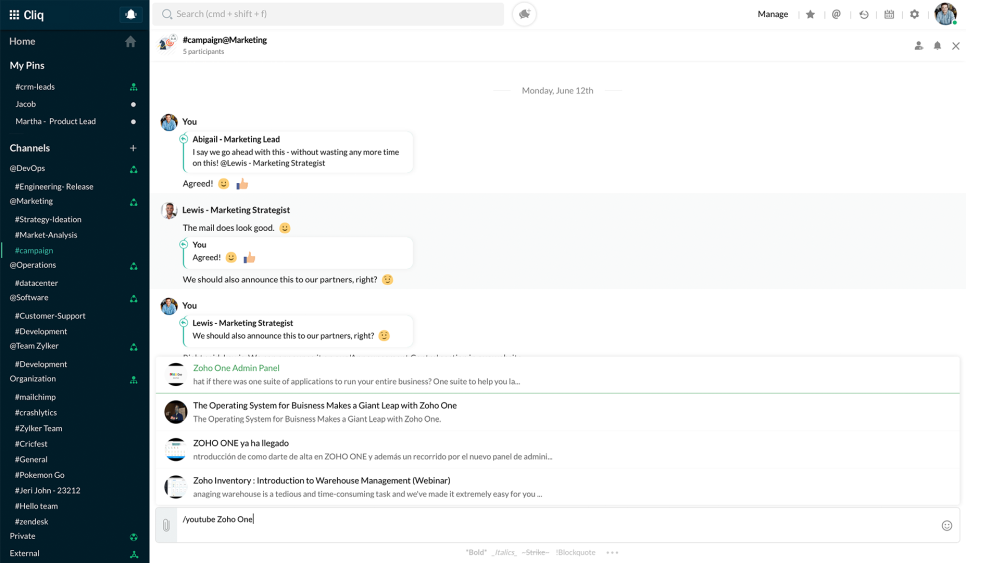 At present, Cliq enables real-time messaging between team members and departments of an enterprise. The ultimate objective is to foster swift and efficient decision-making. Through the chat window, users can also share documents and files of different formats. The platform allows multiple channels of discussion to be created for specific teams, projects and departments.

Some of the additional features of Cliq includes audio and video calls, AI-driven communications administration and animated emojis, among others. In addition to a group video calling feature called PrimeTime, Cliq also supports standard, one-on-one group chats via both audio and video. During the call, users can send texts or share files whether they are using the Cliq native or web application or one of the mobile apps.

For administrative tasks, Cliq works with Zoho’s AI-enabled assistant, Zia. This feature allows users to add as well as track reminders before meetings. According to Vembu, Zia is designed to create group chats before any meeting, add all the participants, remind them before the meeting, ask them to share files, take notes, share minutes of the meeting, and archive the group chat for future reference.

Additionally, the enterprise messaging application can be integrated with most Zoho apps, fetching information from the other Zoho apps and letting users view it in their chat window. The service also works with popular third-party apps including YouTube, Google Drive, Eventbrite, Crashlytics and 20 other apps. To make conversations more interactive and expressive, Zoho is currently in the process of rolling out over 100 new animated emojis, which they are calling Zomojis.

Beyond Instant Messaging: Cliq Provides A Platform For Developers 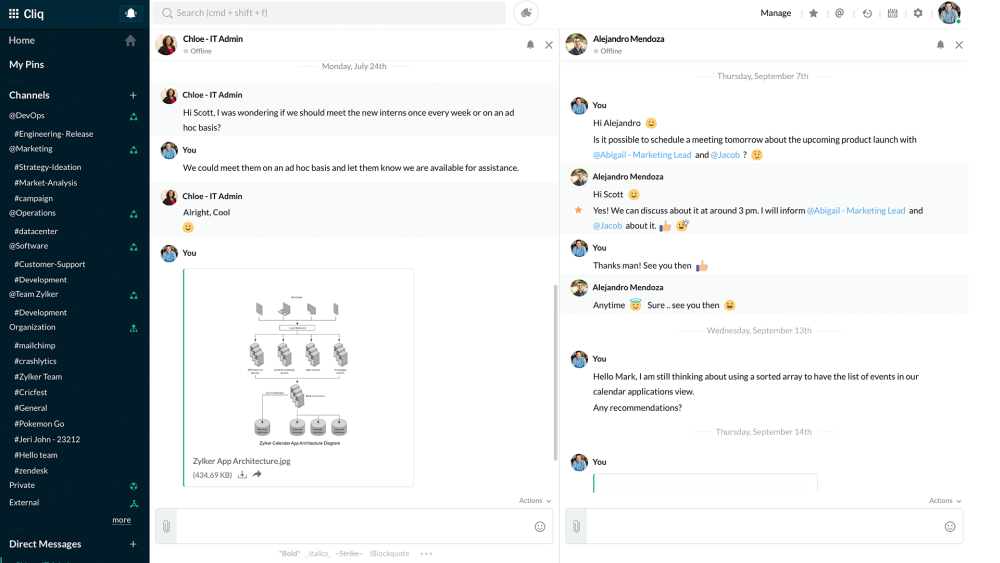 Apart from functioning as an instant messenger, Cliq offers a platform for users to develop their own messaging application using Zoho’s scripting language, Deluge. Aimed at automating the internal processes of an enterprise, these chatbots can later be sold on the Zoho Marketplace.

The company has also announced plans to open source its library of Zomojis under the GPL v3 license, post which the animated emojis will be available for free integration with third-party apps.

Vembu added, “Developers can use the Cliq platform and integrate Cliq with any software that has an open API. It doesn’t take more than 15 minutes to integrate. Once done, Cliq bots and commands fetch information for users when needed. For example, users can check traffic in their area with a traffic bot and Cliq gets you all the info you need.”

Founded by Sridhar Vembu in 1996, Zoho is a SaaS based platform offering all the applications needed to run a business via cloud. Through its core operating system, users can manage customers, sales and support with the help of applications such as Campaigns, CRM and Desk.

The SaaS platform also allows employees to create, store and distribute content on the cloud with Zoho’s productivity and collaboration applications like Office, Mail and Docs. Businesses can run their own operations on Zoho’s HR applications like Books, People and Recruit.

In January 2017, the cloud services firm reportedly invested $10 Mn in five startups to help them during the research and development phase. Later in April, Zoho announced the launch its GST-compliant finance suite, Zoho Finance Plus, aimed at helping Indian businesses make a smooth transition to the new GST regime. The service, according to Vembu, was developed to offer an end-to-end integrated cloud platform for businesses to manage their finances and operations, including filing of GST return.

In July, the SaaS based company unveiled Zoho One, an all-in-one suite of applications for businesses across every function and organisational group. Priced at $30 (INR 1,000) per month, the service currently includes more than 35 integrated web applications and some 55+ mobile apps.

Headquartered in California with offices in India, the U.K., Japan and China, Zoho currently serves more than 30 Mn customers around the world. At present, it employs 5,000+ people. In the fiscal year ending in March 2017, the company reportedly generated $310 Mn in revenue.

With the launch of messaging service Cliq, Zoho now looks to expand its product portfolio even further. The move is part of the SaaS company’s aim to target a billion paying users in the near future.