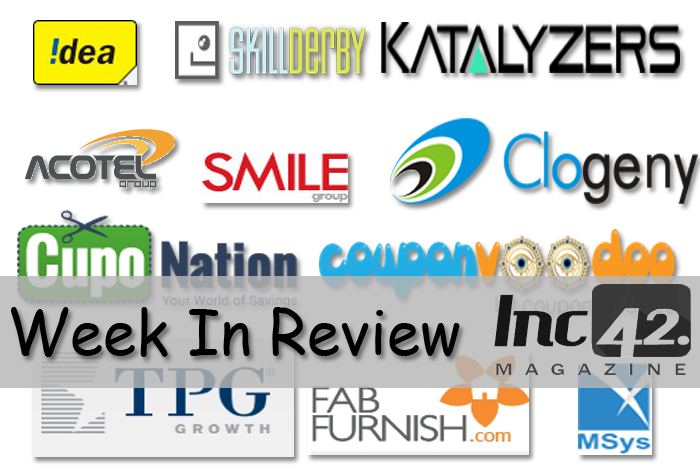 “Katalyzers will leverage Smile’s strengths, enabling successful digital companies to build businesses with speed and efficiency across the emerging markets without diverging their focus and bandwidth from the home markets.” Harish Bahl, founder of Smile Group said in a statement.

Katalyzers has set up offices in India, Singapore, and San Francisco and has presence across China, Africa, the Middle East and Latin America through partner offices of Smile & TPG.

“We are really excited to join hands with Smile Group. Bringing companies to the international markets will require deep expertise and capital,” said Keith Nilsson, who represents TPG Growth. “TPG Growth looks forward to supporting emerging technology companies in their endeavour to enter new overseas markets in partnership with Katalyzers.”

Idea has partnered with Acotel Interactive India to launch SkillDerby, a subscription service for its 130 Mn customers with 2G or 3G enabled smartphones, which will enable them to play high quality games without having to download them.

This service is provided for both the prepaid and postpaid users of Idea network which is third most popular network in India and with traffic in excess of 1.75 billion minutes a day, Idea ranks among the Top 10 country operators in the world.

SkillDerby is a skill-based fun and exciting portal of HTML5 games for Idea Cellular smartphone users. It offers a catalog of games such as Jelly Slide, Bank Bandit, Fish Foodies, and Maniac Traffic etc., which have enjoyed a great success worldwide. All these games are created by Acotel Interactive.

The decision to acquire Clogeny came up as part of an expansion plan for MSys through which it could serve a larger client base with varied requirements.

This acquisition will help MSys position itself better in the niche domains and to provide a deeper level of services to its customers.

According to the terms of the acquisition, Clogeny Technologies will function as a fully-owned subsidiary of MSys Technologies. And in the future new client engagements will be initiated under the name of MSys.

Clogeny is an outsourced product development and software services company with expertise in DevOps, storage, cloud computing and Big Data. Clogeny’s CEO, Kalpak Shah, besides heading Clogeny, will be named the CTO of MSys Technologies, and Chirag Jog will be named VP of Cloud Business Unit.

Sanjay Sehgal founded MSys in Chennai in 2007. It expanded operations quickly to Georgia and Bangalore. It now employs 300 people in US & in India. Sanjay Sehgal co-founded several companies like AMI (sold to LSI Logic for over $220M), iVivity (sold to Emulex), and Scentric (sold to Brocade), which are category-leading companies in their respective markets.

Indian online retailer of home furnitures, FabFurnish’s Co-Founder Vaibhav Aggarwal has quit the company, according to reports. Though there has been no update regarding the same on his Linkedin profile.

FabFurnish was started by Vaibhav Aggarwal, Vikram Chopra and Mehul Agrawal in March 2012 and is backed by Rocket Internet. The company is headquartered out of Gurgaon, Haryana.

Vaibhav, an IIT Guwahati & Wharton school alumnus, had worked as vice president at Groupon India where he managed the company’s operations. He also worked as a strategy consultant at Bain & co., where he was promoted four times within three and half years, after working at Renault for a year.

Vaibhav used to oversee all the marketing activities and initiatives of FabFurnish.com.

In an effort to bring search capability to its site, CupoNation has integrated Coupon Voodoo’s patented search technology into its site, thus giving it a good advantage over other couponing sites.

This integrated search is available on the CupoNation’s website as “online shopping” category where you can find the brand or product for which you need a coupon.

With CouponVoodoo’s search technology, customers would be able to find quick, active, and easily redeemable coupon codes for every single product and brand they have been longing to buy online.

Gurgaon based CupoNation, founded in 2012 by Chirag Rakshit and Sahil Shah, is a Rocket Internet venture backed firm with operations in 14 countries. Rocket Internet has also funded companies like FabFurnish & Jabong in India.

Cuponation offers discount coupons, vouchers and deals across various product categories like Electronics, Books, Apparels etc. & services like Insurance, Restaurants, and Movies among others. It also aggregates the coupons available on different Ecommerce sites such as Flipkart, Snapdeal, Domino’s Pizza, Cleartrip, eBay India etc. which consumers can use to get discounts on their favourite products.

It competes with other coupon aggregation sites including CouponDunia, RetailMeNot, Desidime etc.