Uravu’s machine uses solar energy and non-polluting chemical desiccants like Silica to adsorb water from the air, sterilise it, and prepare for consumption

Due to the decoupling of the heating unit from the adsorption process, the machine can be scaled up to achieve vast economies of scale Uravu’s working prototype can channel air into a chamber containing desiccants like Silica which absorb the water content in the air. Once the desiccant is fully saturated, heat is applied to it using solar energy to extract the water in liquid form. 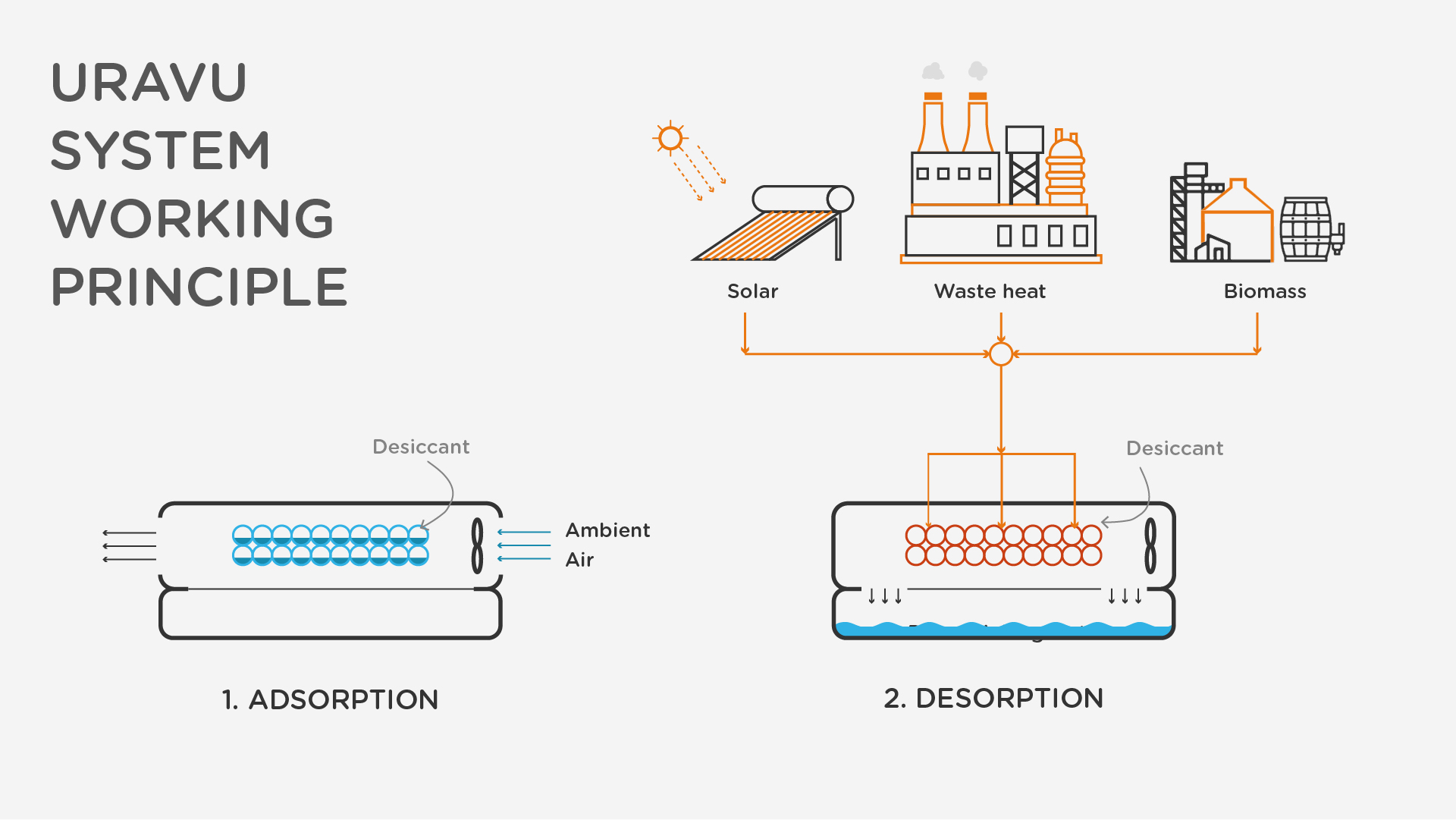 The water-from-air concept is not new, though, as many startups already operate in the space. But unlike Uravu, most of them use refrigeration as a method to condense air in the atmosphere, which is an expensive process with high energy requirements.

Uravu’s method which uses a desiccant is relatively less capital-intensive and energy-intensive and also requires much less maintenance. The desiccant used in the machine has a shelf life of around ten years, and the rest of the components are mostly conventional electronic components like fans and pipes. 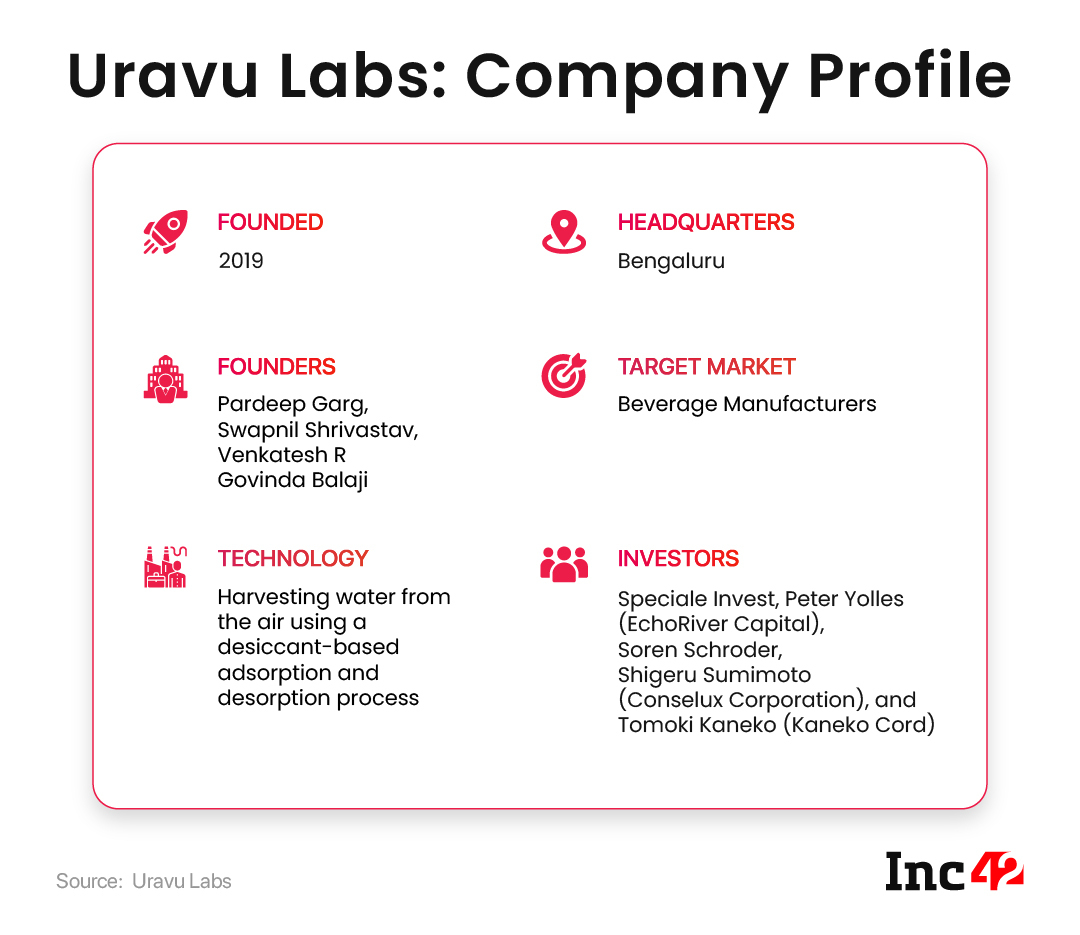 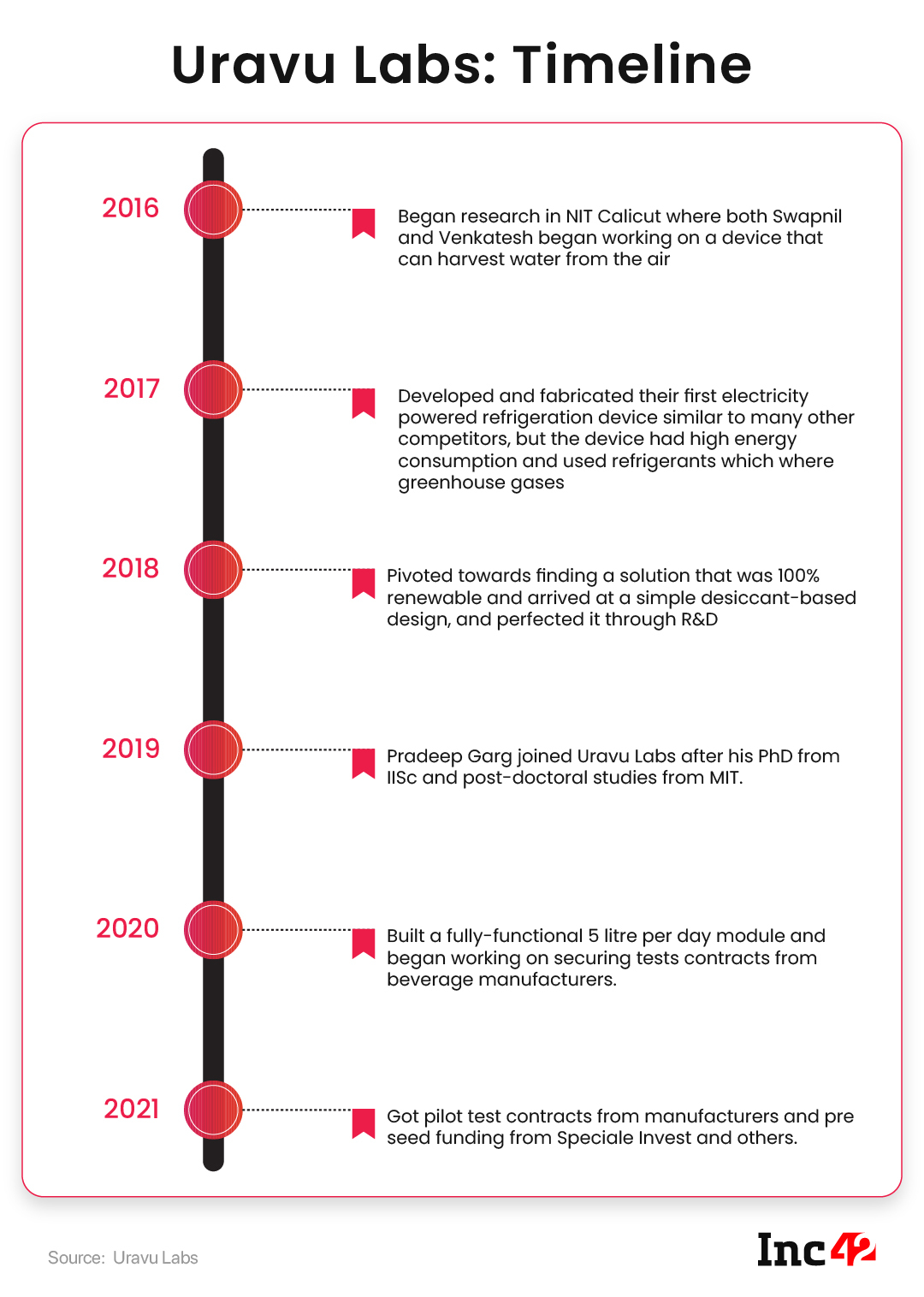 Another startup using renewable energy to harvest atmospheric water is Zero Mass Water, an Arizona-based startup that manufactures ‘solar panels’ that use solar energy to pull clean drinking water from the air.

Zero Mass Water is backed by Breakthrough Energy Ventures, a $1 Bn fund led by Bill Gates, Jeff Bezos and Mark Zuckerberg. The startup’s panel arrays, known as Source, use sunlight to harvest water from the air. The harvested vapour is then sterilised and turned into liquid, which is stored in a reservoir that can be connected to a home’s water supply.

Uravu Labs has taken a different approach by decoupling the heat source and the desiccant so that the machine can be scaled up for industrial applications. According to Pardeep Garg, one of the cofounders, Uravu Labs is initially looking at FMCG beverage manufacturers as a target market.

“We want to focus on the beverages market which has demands for large amounts of high quality water. The water that our machine harvest has a TDS (concentration of dissolved particles) of 50 after mineralisation and a pH of 7, which is exactly within the requirement of beverage companies,” said Garg in conversation with Inc42.

Unlike Zero Mass Water’s modular solution which sells the entire machine as a single unit, Uravu Labs’s decoupled solution will scale much better. For example, 100 source units working together will have the same operating efficiency as a single unit operating by itself. Uravu’s machine, on the other hand, can take advantage of the better economies of scale that can be achieved with a custom-built solution.

The heating unit used for the desorption process is one of the most energy-intensive parts of Uravu’s machine’s process. The team behind Uravu envisions massive large-scale plants with centralised solar heating systems akin to the district heating plants used to heat entire gated communities and sections of cities. These large-scale centralised solutions will also simplify maintenance.

“The cost of water in the first pilot will be expensive. Going forward, our first milestone will be to achieve a cost of INR 5 per litre for a single rooftop unit that can produce 20 litres of water a day,” explained Garg. “But as the scale goes up, we are expecting the cost to go down significantly to about INR 2.5 per litre. 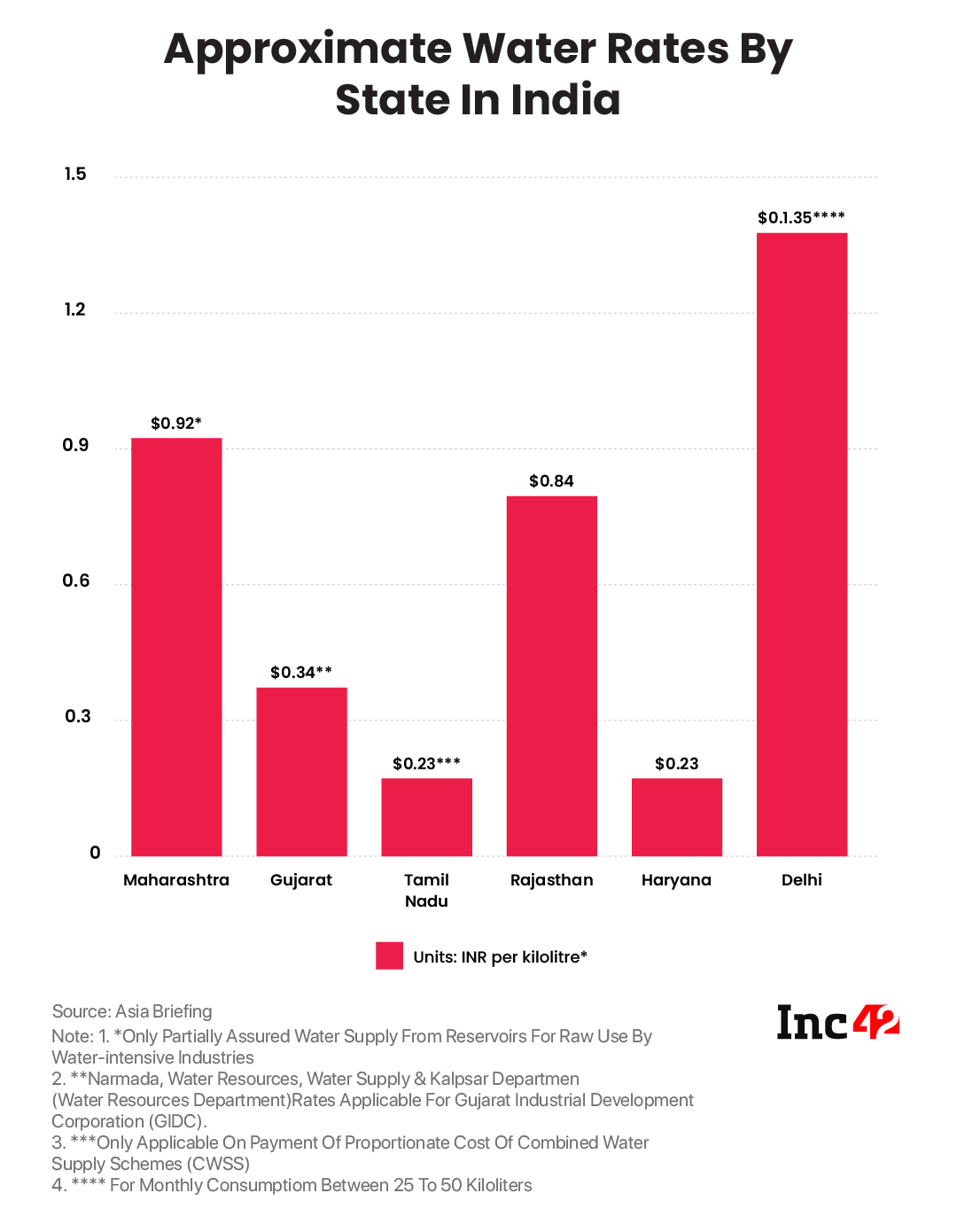 Even at that scale, water produced by Uravu’s machine will be much more expensive than what factories usually have to pay for water. But that may change not too long in the future.

Data from the World Resources Institute’s Aqueduct tool reveals that 17 countries home to one-quarter of the world’s population face ‘extremely high’ levels of baseline water stress, where irrigated agriculture, industries and municipalities withdraw more than 80% of their available supply on average every year. 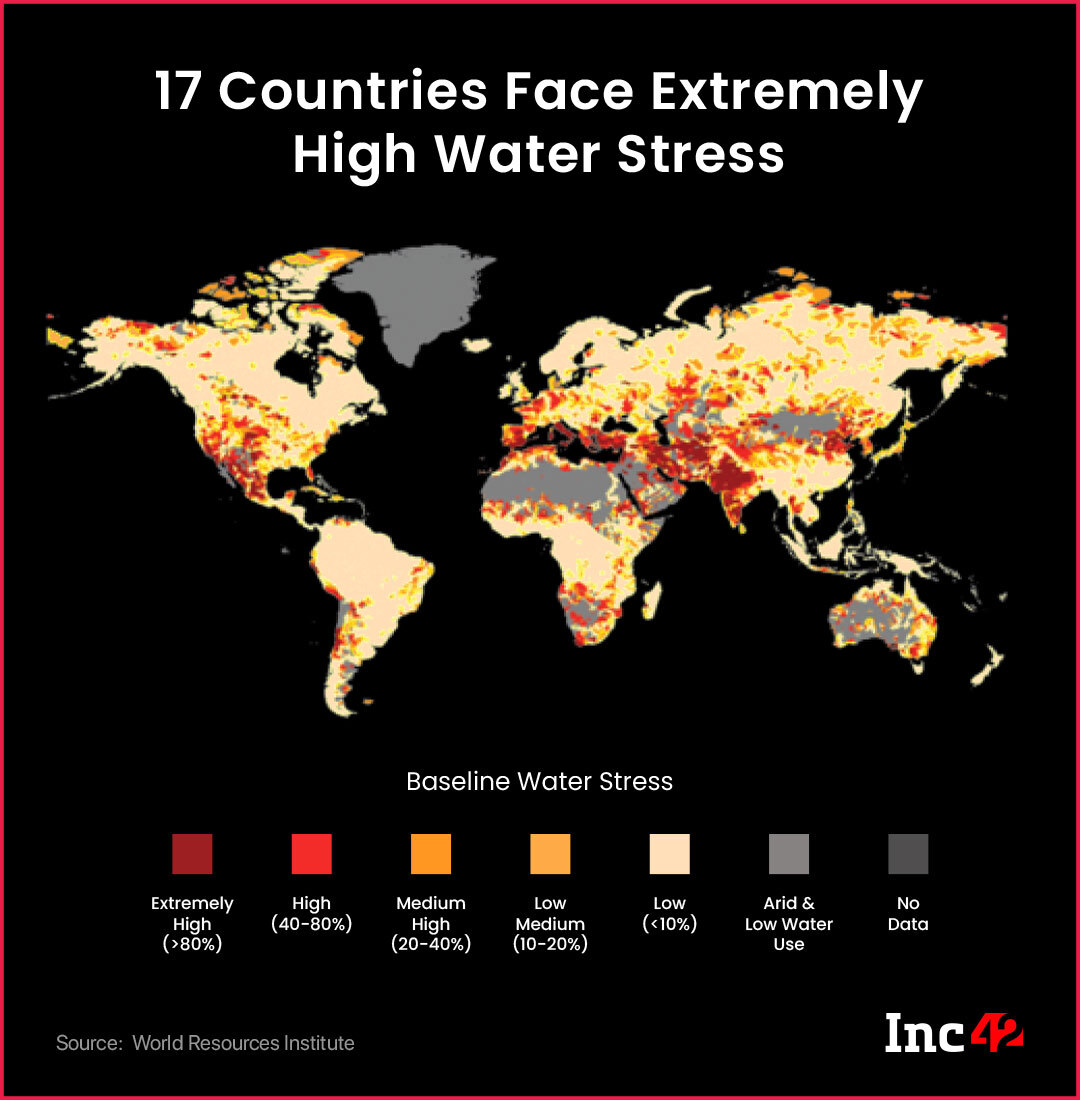 A total of forty-four countries, where one-third of the world resides, faces ‘high’ levels of stress with 40% of the available supply being withdrawn every year. Such narrow supply and demand gaps leave countries and their population susceptible to droughts which can cause ‘Day Zero’ events like the one that happened in Cape Town, South Africa.

In December 2019, government public policy think tank NITI Aayog published a report titled “Composite Water Management Index”, which mentioned that India was undergoing the worst water crisis in its history and that nearly 600 Mn people are facing extreme to high water stress. According to the report, India is placed at 120th among 122 countries in the water quality index, with nearly 70% of the country’s water being contaminated.

Water is the biggest component of most packaged beverages, which is a good thing because it is a cheap resource. But the problem with that is, transporting large quantities of a product that mostly contains water is an expensive affair. Due to this, beverage manufacturers usually have a decentralised supply chain where large quantities of concentrate are shipped to various different bottling plants where they are diluted and sometimes, carbonated.

“A lot of the time, these bottling plants are set up in areas that are already water-stressed, causing immense difficulties for the local communities that live there. This is why we see many protests over bottling plants, and them having to shut down,” said Swapnil Shrivastav, cofounder of Uravu Labs during a conversation with Inc42, referring to the shutdown of Coca Cola plants in Kerala and Tamil Nadu.

“That is the place where we want to create an impact with our commercial operations. We don’t want communities to be robbed of their drinking water and water they use for agricultural purposes,” continued Shrivastav.

Just like with a lot of other renewable technology, it would do no good to wait for the invisible hand of the free market to do its job and bring such technologies into the mainstream. But rather, startups should be encouraged with government subsidies and incentives, public and private sector investments.

The founders are open to the idea of being part of CSR initiatives that bring relief to water-stressed areas. The technology is too early for the end-consumer to bear the brunt of the cost, but that shouldn’t be an obstacle.