Want To ‘Challenge’ WhatsApp With Kimbho? Get Your Data Security In Place First, Patanjali

Want To ‘Challenge’ WhatsApp With Kimbho? Get Your Data Security In Place First, Patanjali Baba Ramdev-led Patanjali’s bid to take on Whatsapp seems to have backfired with its own messaging app — Kimbho — seems to have fallen flat. Just a day after it was launched, Kimbho is facing some serious data security breach allegations by none other than Robert Batiste, aka Elliot Alderson, on Twitter.

The hacker had earlier also posted a video explaining, “How to bypass the password protection of the official #Aadhaar #android #app in 1 minute.”

Robert Batiste, in a series of tweets, claimed that Kimbho app data is not secure and can be accessed by anyone.

He tweeted: “ @KimbhoApp before trying to compete #WhatsApp, you can try to secure your app. It’s possible to choose a security code between 0001 and 9999 and send it to the number of your choice #kimbhoApp.”

Another tweet: “This @KimbhoApp is a joke, next time before making press statements, hire competent developers… If it is not clear, for the moment don’t install this app .#Kimbho #KimbhoApp” 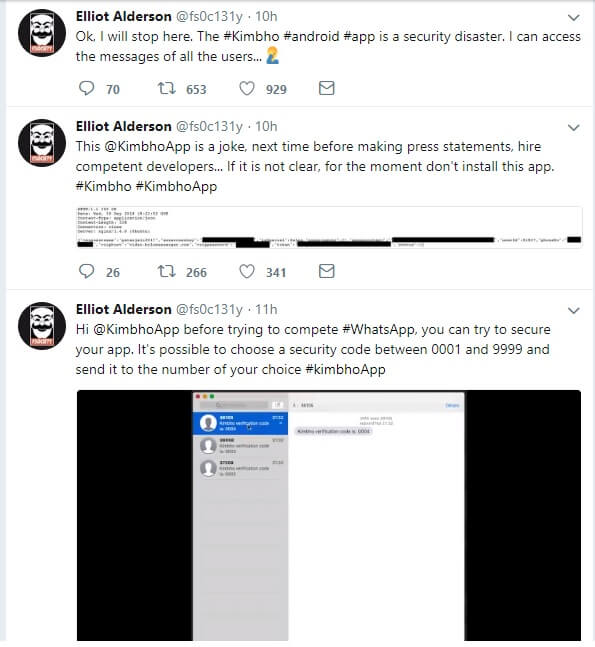 One more: “The #Kimbho #android #app is a security disaster. I can access the messages of all the users…”

Elliot also went on to claim that the KimbhoApp is a copy paste of another #application. The description and the screenshots in the app stores are the same. Moreover, the Kimbho app is making a request to bolomessenger[.]com

As a result of the allegations, Kimbho, which showed up to 50K downloads on Google Play Store, is currently unavailable for download. The message on Play Store reads: “The item that you were attempting to purchase could not found.” 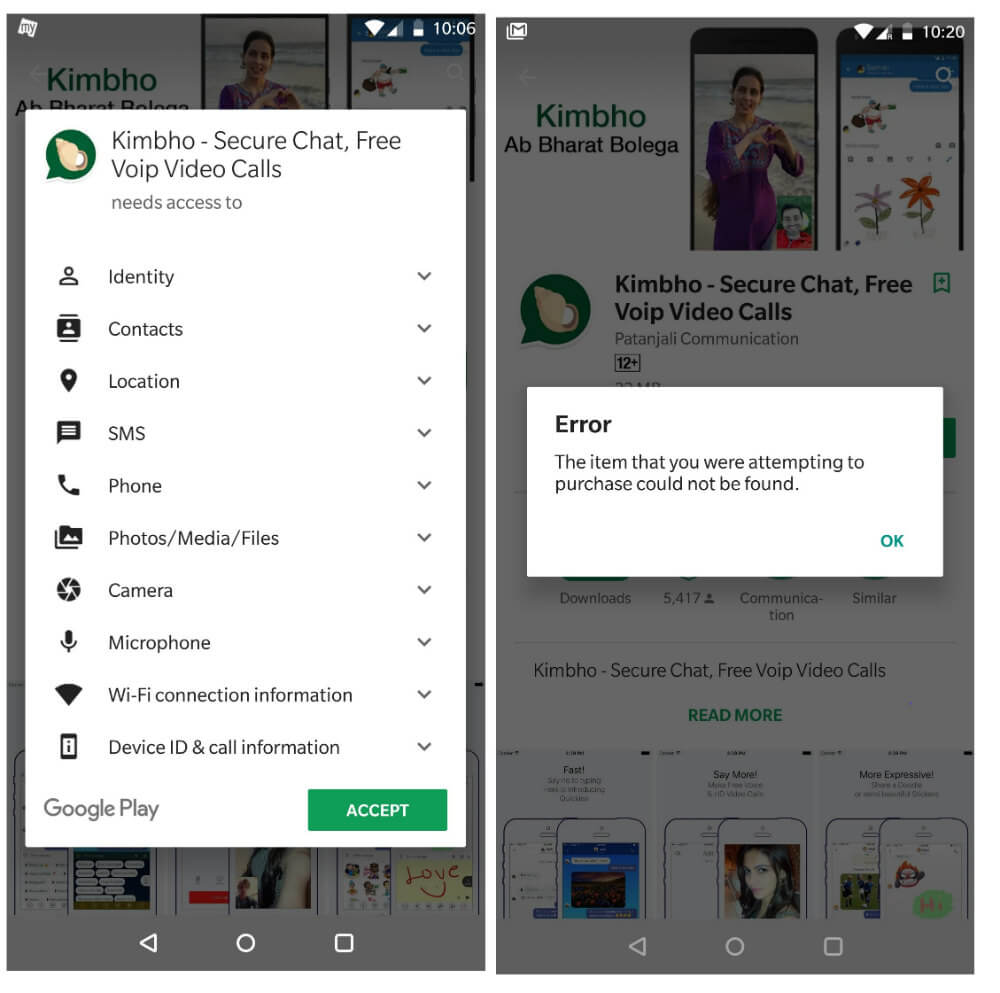 When Inc42 tried to access the app, we found that while it’s working for some Android users, many others are having problems — they aren’t getting the OTP even after downloading the app.

However, Kimbho is still available and functional smoothly on iOS. 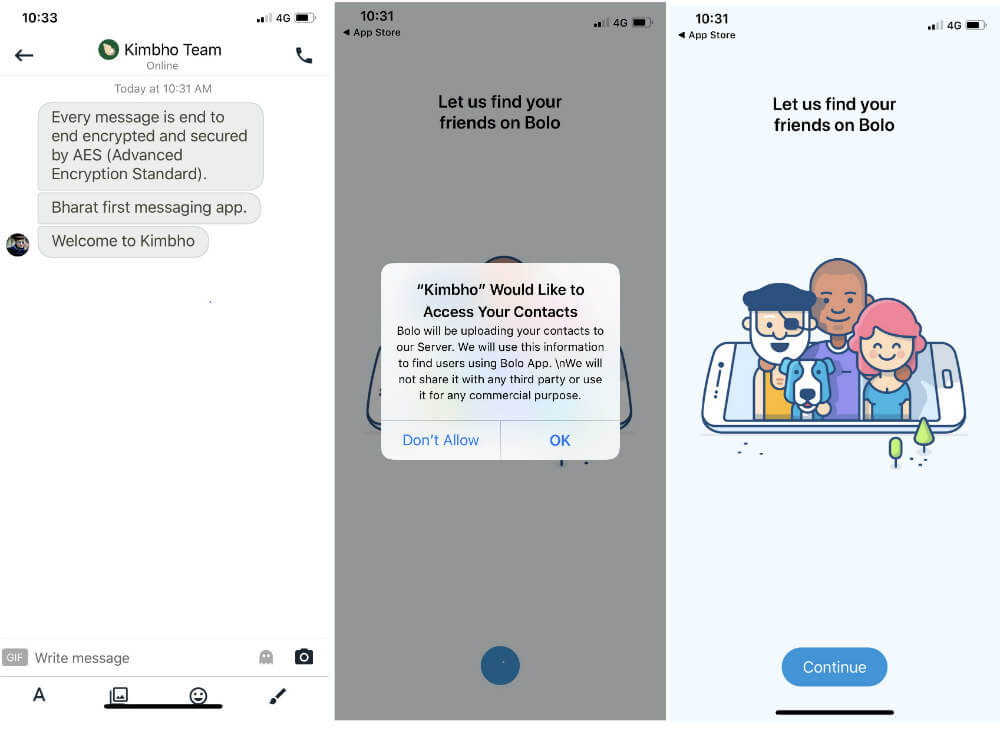 India’s leading FMCG company Patanjali, with its ‘Swadeshi’ mantra, has been trying to explore different verticals since inception. After recently launching its own SIM (with BSNL), Baba Ramdev’s company launched Kimbho with an aim to provide a swadeshi solution to the likes of WhatsApp, WeChat, and other foreign messaging platforms in India.

Patanjali spokesperson SK Tijarawala had tweeted about the app (translated from Hindi): “Now, Bharat will speak. After launching sim cards, Baba Ramdev has launched a new messaging application called Kimbho. Now Whats App will be given a competition. Our own #SwadeshiMessagingplatform. Download it directly from Google Play store.” 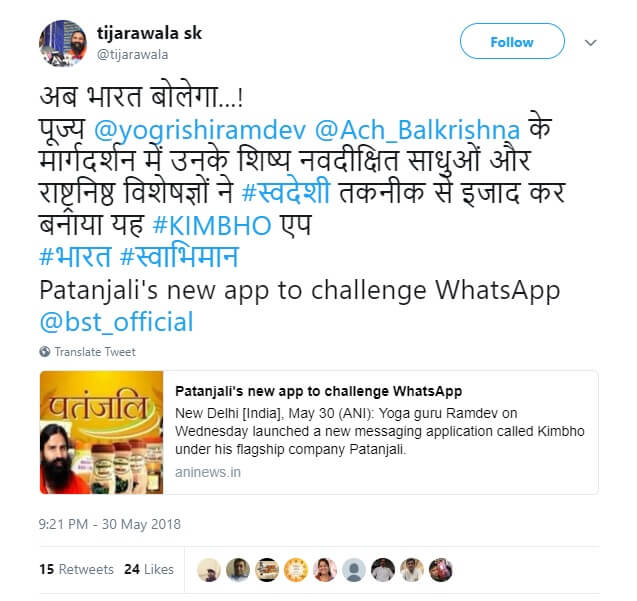 Patanjali, in a short span of time, has been competing with the likes of HUL and Dabur India in the FMCG segment. Riding high on Ramdev’s fame, the company, with its own retail stores and a collaboration with Future Retail, has successfully reached the urban as well as rural markets of India.

Patanjali has also been rendered as an important case study in prestigious business management institutions owing to the aggressive manner in which the company lifted itself from scratch to becoming a multibillion-dollar brand.

Such has been the success of Patanjali that even EV, steel and mobile chip manufacturers have reportedly sought support from Baba Ramdev’s Patanjali Ayurved on buyouts, joint venture (JV) partnerships, and financial aid.

However, it looks like the giant step it took by launching Kimbho to take on Facebook’s WhatsApp has backfired. Launching a messaging app successfully not only needs reach, but also a pool of talented developers, something Patanjali has clearly not invested n. Will Baba Ramdev’s Swadeshi mantra will work this time?