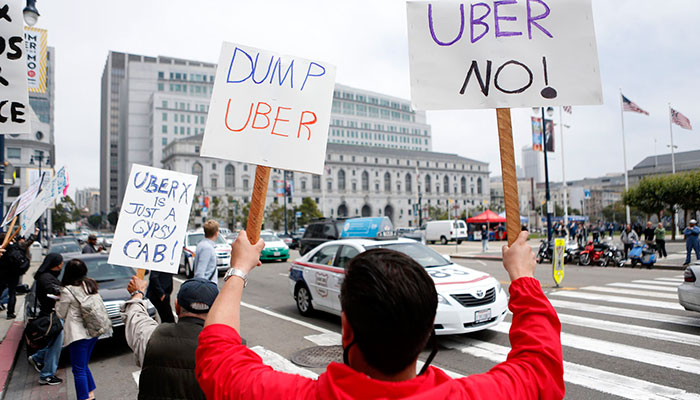 The on-demand taxi booking service, Uber, has been a disruptive force in the stalwart taxi industry worldwide and seems it has a become a problem for Indian cab providers. The local taxi players in India have revolted against the service alleging Uber of breaking a number of RBI norms and regulations.

“Collection of fares by Uber on behalf of a taxi driver in India should qualify as a capital account transaction under FEMA (Foreign Exchange Maintenance Act) and such a transaction is not specifically permitted under the regulations,” says a letter to the RBI from the Association of Radio Taxis according to a report. The association includes Meru Cab, Mega Cab, and Easy Cabs.

Valued at about $18 billion and backed by Amazon founder Jeff Bezos and Google, Uber has struck fear among competitors as it grows its technology-based services across cities globally at a rapid pace. The taxi providers alleged that Uber stores passenger credit card details on its system.

The letter says that Uber collects the fare from a passenger’s credit card, transmits it to Netherlands-based Uber BV in foreign currency, then sends 80 percent of it back to the driver in his Indian account via wire transfer from the US-based Wells Fargo Bank after deducting its commission. The association says that Indian law only permits Uber to collect the commission and not the fare in foreign currency.

It also violates an RBI rule mandating a two-stage authentication for any credit card transaction using an international payment gateway. The RBI has yet to react to the complaint.

Uber has faced similar regulatory hurdles thrown its way from competitors in other countries as it rolls out its services around the world.

In London, the Licensed Taxi Drivers Association accused the firm of running illegal taxi meters because of the way Uber app automatically calculates fare using GPS data at the end of a trip. Similarly in Germany, Berlin Taxi Association won an injunction against Uber that could prohibit it from operating there, though the ruling isn’t being enforced while Uber appeals the decision

In Taipei, taxi drivers held up traffic in a demonstration against Uber. And in South Korea, Seoul is reported to be planning a complete ban on Uber to protect local taxi services.

The Indian taxi users are often frustrated by the poor quality of services with cabs not showing up at peak hours despite receiving booking confirmation. Uber’s tech-based approach automatically detects the customer’s location and sends the nearest available cab, usually within minutes. This has been a refreshing change, forcing other operators to either revamp their services or to try to drive Uber out of the country. They appear to have chosen the latter path.

The RBI and Uber declined to comment for the story.