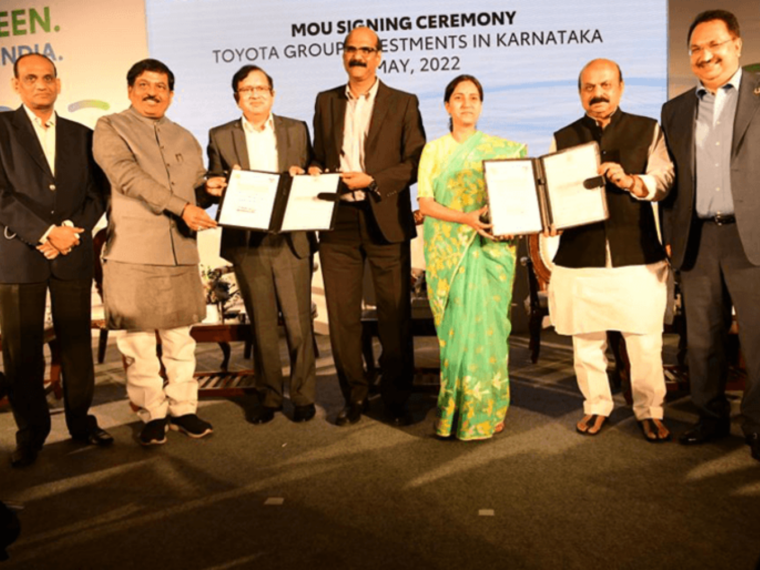 The investment will enhance the local supplier growth in Karnataka, further leading to higher investments and job creation

According to the statement, Toyota will focus on addressing manufacturing and lifecycle carbon emissions to realise its carbon neutrality goal by 2050

Toyota Kirloskar Motor and Toyota Kirloskar Auto Parts, subsidiaries of Toyota Group of Companies, have inked an MoU with the Karnataka government. As a part of the MoU, the two companies will invest INR 4,100 Cr in the state.

The capital infusion will also enhance the local supplier growth in Karnataka, further leading to higher investments and job creation. Besides boosting the local manufacturing sector, it will also support local community development.

On this occasion, the Chief Minister of Karnataka, Basavaraj Bommai said, “Our aim is to build ‘New Karnataka for New India’ by creating new 21st century industrial townships and corridors. As a state committed to sustainable development and contributing to the nation’s progress, we want to make Karnataka a global supply-chain and manufacturing hub under our ‘Build for the World’ mission.”

As per the deal, the parent company, Toyota Group of Companies will contribute to the ‘Make in India’ and ‘Atma Nirbhar Bharat’ missions. It claims to provide training and skilling to strengthen as well as increase the supplier base.

According to the statement, as a part of Toyota Environmental Challenge 2050, Toyota will focus on addressing manufacturing and lifecycle carbon emissions to realise its carbon neutrality goal by 2050.

Toyota further claims to create an electrified manufacturing hub in India in the near future.

A slew of fundraisings has occurred in the EV segment. Recently, Jindal Worldwide, via its subsidiary Jindal Mobilitric, acquired Mumbai-based EV startup Earth Energy EV for an undisclosed amount. The acquisition will help the company foray into the Indian EV segment.

During the same time frame, electric mobility startup Prakriti E-Mobility secured an undisclosed amount of lead investment as part of its Pre-Series A funding round, led by IEG Investment Banking Group.

The funds would be used to expand its fleet of electric vehicles (EVs) and add more charging stations across the country. It would also use the funding to invest more in the technological side of its offerings and to upgrade its mobile app.