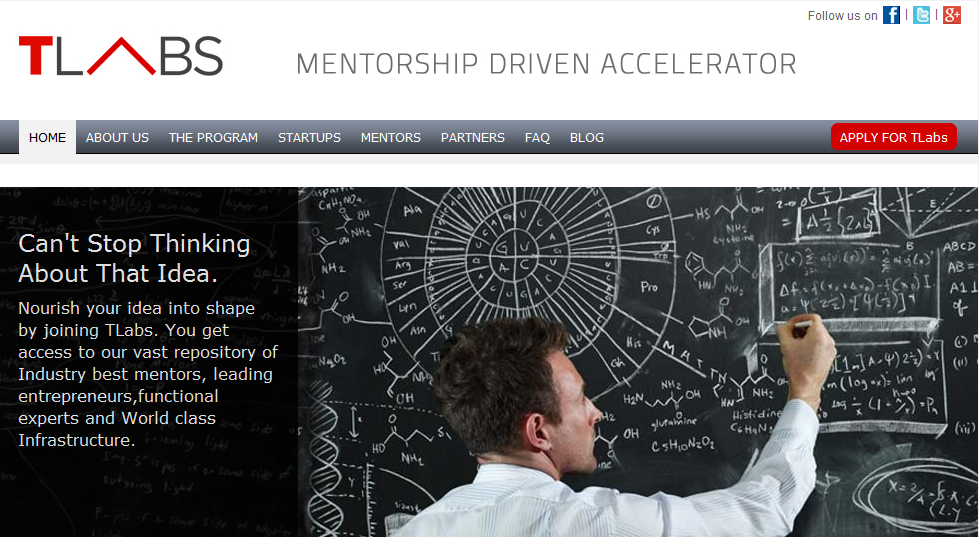 TLabs, a startup accelerator and early stage seed-fund for internet and mobile technology startups by Times Internet Ltd, has now started accepting applications for its 6th batch commencing from August 2014.

For this batch, Tlabs has done a slight change in its structure, as from this batch it will announce the result for the applied startup, whether it is selected or not within two weeks.

“We are doing rolling admissions from now on, though the batch will start on a certain date, we may select Startups and engage with them as soon as they are selected,” said Abhishek Gupta, Head, TLabs Accelerator, in an conversation with Inc42 Magazine.

It will also start inviting Startups selected to work out of TLabs before the batch officially starts and attend the previous batch demo day. “This way we are trying to maximize our engagements with the Startups and they should hit the ground running when the batch starts,” added Abhishek.

Entrepreneurs/founders/co-founders who are working in internet and mobile technology and are looking for support in nurturing their products into sound businesses can apply for the it.

TLabs is also planning to organize interesting events for startups across the country over the course of next couple of months.

TLabs has a total of 31 companies in its portfolio. It is powered by a panel of 60+ mentors. It runs a structured and highly intensive five-month mentoring program for these startups. It also offers a funding of INR 10 Lakh for 10% equity, a co-working space and a host of other benefits from prominent tech partners, to the startups it accepts in the program.

Recently, one of its accelerated startup from it’s Fall 2013 Batch, Betaglide had competed at the Rice Business Plan Competition (RBPC) and won the Mercury Fund Tech Transfer Prize. “Winning the rice university challenge Prize and commitment from US investors like Mercury Tech Fund strengthens our belief that Indian startups with the right support can excel in Global markets. This validates TLabs philosophy that working on the fundamentals is the key to success of startups, if you have the right model and traction, you will get the money, said Abhishek.

More details about TLabs can be obtained from www.tlabs.in, click here to apply for its 6th Batch.