The Final Chapter In Amazon Vs Future Battle?

The Final Chapter In Amazon Vs Future Battle? It feels like ages ago when Reliance announced its deal with Future Retail, and in the world of business 16 months is often long enough for it to be called an age. But Amazon threw a spanner in the works.

And now that Amazon’s stake in Future Group has been revoked and suspended after all these months, the deal just doesn’t seem as shiny as it did last August. We’ll look into what happened and how we got here, but before we dive into this, here are two stories to whet your appetite.

One of India’s largest corporate tussles of modern times is coming close to its end. After the CCI suspended Amazon’s 2019 deal with Future Group over a stake purchase in a related entity, the ecommerce giant has faced a major setback in its retail ambitions in India and could face further legal challenges.

Before the CCI decision to suspend that deal, Amazon had strongly opposed the Future-Reliance deal as the US giant claimed it would restrict competition in the Indian retail market by allowing Reliance Retail to grow its presence without many other major rivals.

Big Blow For Amazon: Primarily, the CCI’s ruling allows Reliance to press forward and finalise the acquisition of Future’s retail assets, which has been hanging in the balance since August 2020. Reliance signed a $3.4 Bn deal to purchase Future’s retail and warehouse assets.

Secondly, as per CCI, Amazon had suppressed information while asking for the regulator’s  approval when investing in Future Coupons Ltd, which gave it some control over Future Group’s retail assets. While Amazon is likely to appeal against the CCI order and can also reapply for CCI approval, the ruling means that Future Group is unlikely to cooperate in any reapplication process for the antitrust clearance.

The CCI also imposed a penalty of around $27 Mn on Amazon India for its misrepresentation.

The Background: The legal entanglement began when Amazon sent a legal notice to Future Group soon after the Reliance deal was announced. Then, in October 2020, Amazon approached the Singapore International Arbitration Centre (SIAC) for an alternative dispute resolution process. Amazon claimed Future Group had violated the contract under which Amazon had purchased the shares of Future Coupons in 2019.

Since then multiple court cases and SIAC directives later, there has been no clear resolution until the CCI’s decision this week.

Future Retail, which saw business plummet in the immediate aftermath of the pandemic in March last year, still has significant retail presence, which makes it a prized asset for Reliance as well as Amazon for their omnichannel retail ambitions. Future Retail owns more than 1,500 supermarkets and other outlets.

Why Was Amazon Pulled Up: The CCI slapped a fine on Amazon for making contradictory statements before different legal forums and the regulator about the intent of the 2019 transaction and then put the Future Coupons deal in abeyance.

Over the past 18 months, Amazon has faced stiff opposition and pressure from traders’ groups and landed itself in many controversies. For instance, internal documents showed that the US giant deliberately copied and outpriced Indian D2C products that sold well on its platform. Other reports also highlighted how Amazon had shown bias towards sellers that it owned an indirect stake in.

And while this is certainly a big setback for Amazon, there’s little doubt that the tech giant will look at a different strategy for its retail plans, even if the Future Group has slipped away. What that would be will be interesting to see in 2022. 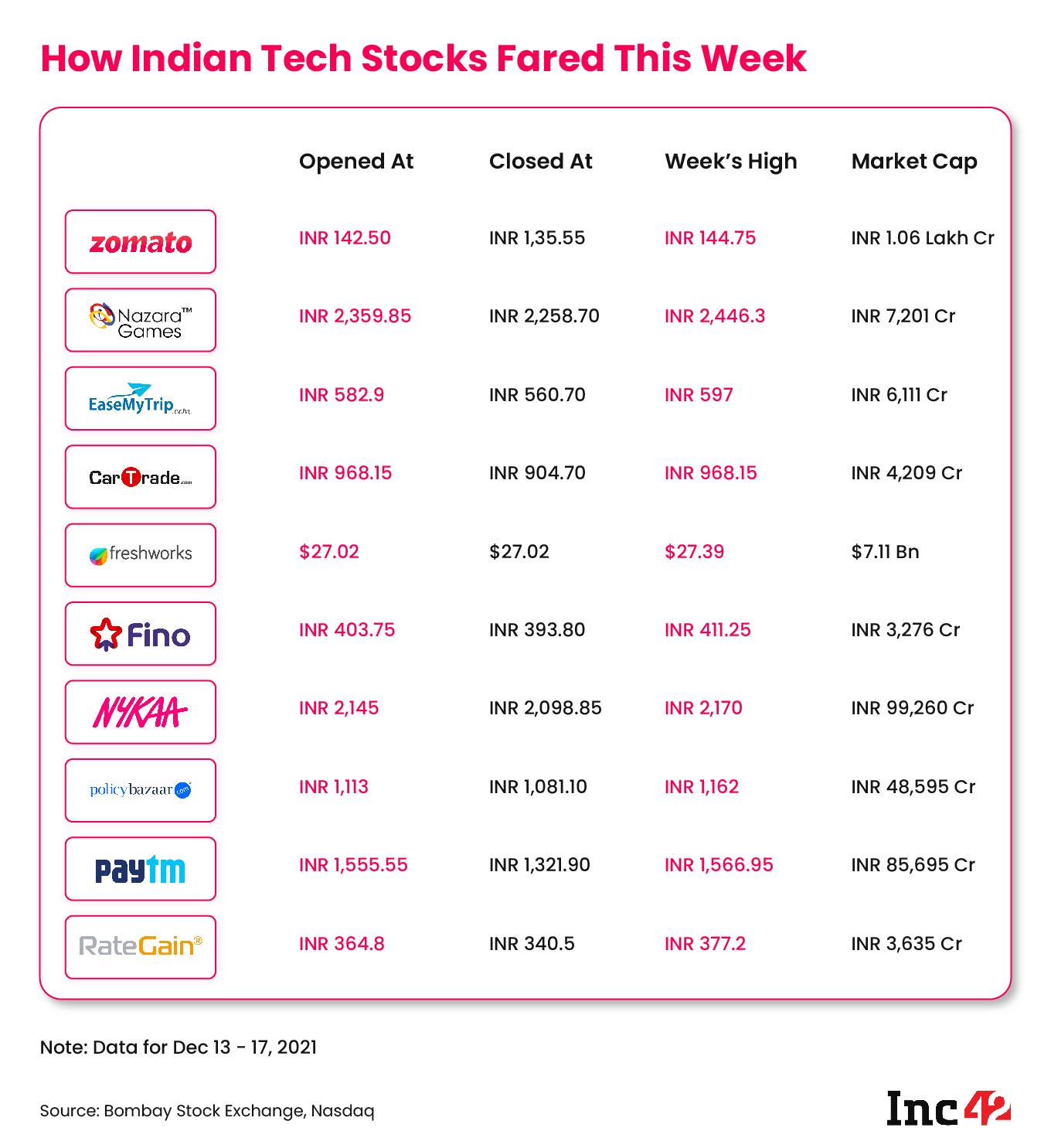 Flipkart backed Ninjacart, Innovacer raised $150 Mn and ShareChat’s valuation soared to $3.2 Bn with a $266 Mn Series G round — Overall, the Indian startup ecosystem raised $1.3 Bn in funding across 48 deals in the past week. 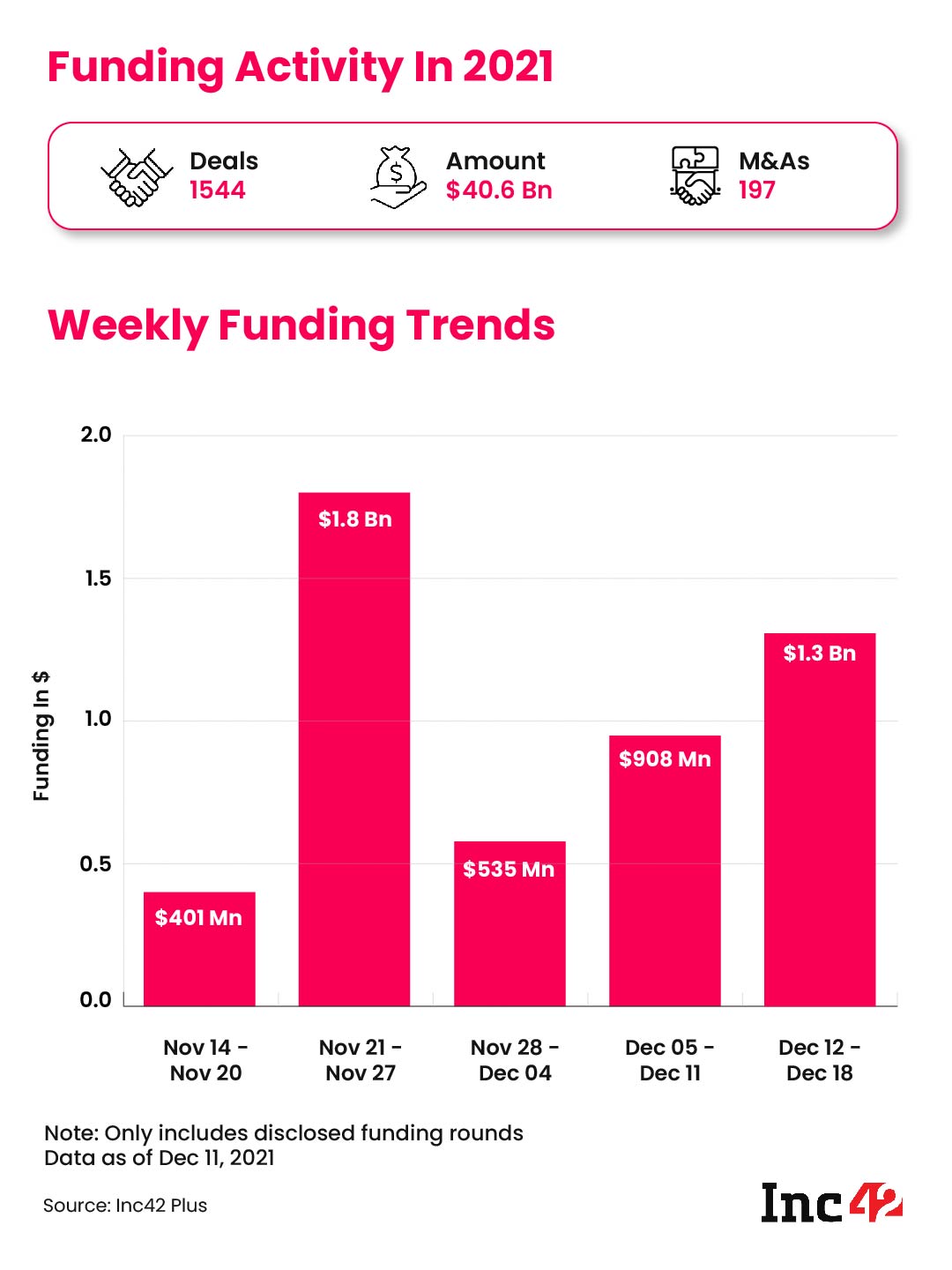 Recap the most incredible stories of the year with our annual tech and startup review. The eighth edition of this series introduces our app analysis series, starting with music streaming and OTT video streaming platforms, with more to come.

Plus, we have also gone over the funding boom this year, the NFT craze and the IPO frenzy this year. Watch out for more all through this month.