Ecommerce market in India is projected to explode and reach $100 Bn by the end of 2020. The presence of number of marketplaces and niche players in the country has not only intensified the war among these players but is also lurking major industry biggies to taste the ecommerce segment in the country. Tata Group, after being in news for months, has launched an grocery eretail shop www.my247market.com.

Though Trent operates supermarkets under the Star Bazaar banner, its association with grocery ecommerce platform is restricted to just being a supply chain partner for My247market.com. Further, the customers will also not be able to earn or redeem Star Bazaar Clubcard loyalty programme points nor they will be able to use Star Bazaar’s gift card/cash card to pay for purchases made on the ecommerce platform.

Among products being sold on the ecommerce platform include, fruits, vegetables, staples, meat, bakery and dairy products, alongwith packaged food, beverages, confectionery, baby care products, personal care products, home need products and pet care products among others. It is currently delivery products to a small part of Mumbai and is expected to increase presence soon. 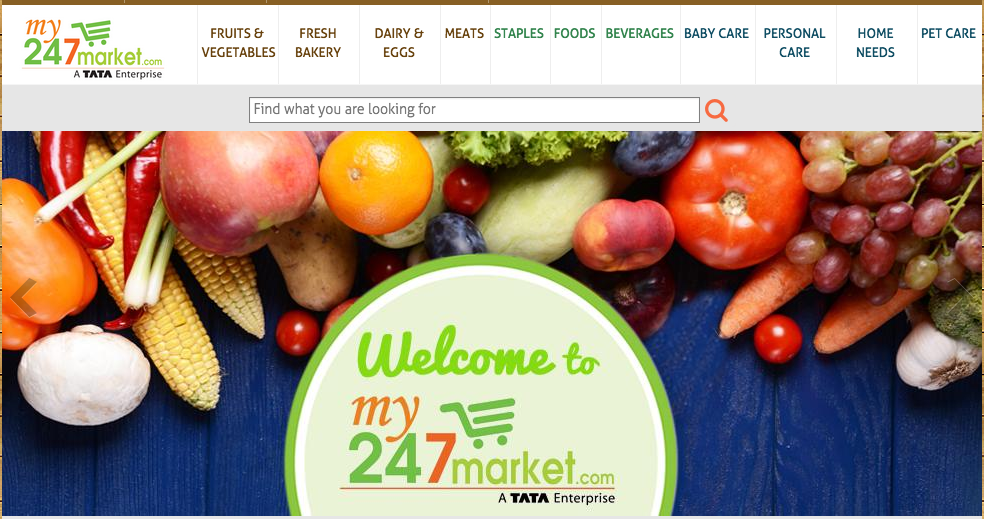 The customer needs to buy products worth INR 750, if the total value of goods bought exceed INR 1,500 deliveries will be free of cost, beyond that there will be exceeded amount of INR 50.

According to the website, orders will be delivered in state-of-the-art temperature controlled vans which ensure that all the temperature sensitive products are stored in the right manner, ensuring only the freshest and the best is delivered to the customers.

Interestingly, Tata has made foray in grocery retailing at a time when ecommerce biggies are said to be working on aggressive plans to tap this category. Homegrown, Flipkart is reportedly going to make a foray into grocery market in later half of this year. Just few days back, Amazon launched KiranaNow and Snapdeal too is testing hands in grocery after it got Godrej Group’s food retail arm Godrej Nature’s Basket on board.

On the other side, Mukesh Ambani promoted Reliance Retail had launched www.reliancefreshdirect.com in Mumbai. With all this, there are a couple of ecommerce players including BigBasket.com, Localbanya.in, go4fresh.in, ZopNow.com, among others who are already dealing in the grocery space. Just yesterday, ZopNow had announced that it has raised $10 Mn in funding.

In India, there are over 1,000 – 1,500 supermarkets, while the total turnover is INR 15,000 Cr. as against an overall food and grocery market size of INR 20 lakh crore. “If the economy continues to grow at say 6% to 8% every year we will be adding $20 to $30 Bn in growth primarily through food and grocery consumption. Online alone will never be able to address this growth in overall consumption in the country right now hence I don’t think there will any impact on the food and grocery retailing sector going forward,” Arvind Singhal, chairman, Technopak said.

The development was first reported by DNA.