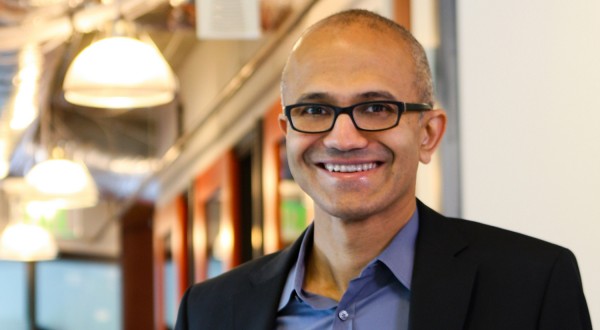 “We fundamentally think of ourselves as a tools-and-platform company. The idea of creating technology to put in others’ hands so that they can go on create more technology is sort of very natural to us,” declared Satya Nadella, CEO of Microsoft at an event in Bengaluru, kick-starting his three-day visit to India today, February 20, 2017.

In a casual fireside chat with Infosys co-founder Nandan Nilekani, Satya spoke about how cloud and AI excite him and how Microsoft wants to enable Indian startup entrepreneurs to build businesses on a global scale.

Satya kickstarted the conversation by commenting that since Nandan personifies what it means to create startups – if he were to start again, what would he like to start.

Nandan replied that when he sees the power of the infrastructure being created, one can think of India scalable startups – be it in banking, healthcare, or education. He said, “One thing that I have learnt from (developing) Aadhar is that you can either chose to do something which has a lot of impact on 15 Mn people or do little but impact a billion people.”

When questioned about what he is excited for in platforms, given that Microsoft has so much experience in building platforms, Satya underlined three broad areas which spark his interest- Cloud and AI, Cortana, and Augmented Reality. Elaborating on the three, he stated,

“Cloud and AI kind of go together. So, the fact that you have an infrastructure that is capable of reasoning over large amounts of data is what is fuelling this AI revolution.”

He added, “The second area that I am excited about is Cortana. I actually think Cortana as a third runtime. Operating system on a device was the first runtime, the second runtime you could say was the browser. The third runtime can actually be the agent. In some sense, the agent knows you, your work context, and your world. That is how we are building Cortana and giving it a natural language understanding. Because for all of the advances in the human computer interface, there is nothing to beat language. The third platform that I am excited about is augmented reality.”

Furthermore, during the conversation, Satya also expressed his admiration for the speed and impact of the India Stack (Aadhar, UPI) which led to Nandan questioning him as how does he see the collaboration between all the platforms at Microsoft and the India Stack and combining the power of both?

To this Satya elaborated that the more he thinks about how technology evolves, it is short-sighted to think of just one platform. He explained,

“You actually have to have an architectural worldview that says whatever we are building as a platform, has to be an ingredient for someone else who is building a platform. So, in our case, we would love our services such as Offfice365 to be great participants in the India Stack. I should be able to login using Aadhar, be able to use any of the applications using the identity system that every Indian uses. Also, any entrepreneur who wants to build for India Stack should be able get the core infrastructure through our cloud infrastructure.”

Flipkart And The Cloud

And then came the big announcement – when Satya stated that in a step towards this precise direction, Microsoft has partnered with Flipkart wherein Flipkart will adopt Microsoft Azure as its exclusive public cloud platform. Inviting Flipkart’s co-founder Binny Bansal on stage, Satya added that Microsoft’s mission is to support Indian entrepreneurs to create businesses of global scale.

It is interesting to note that Amazon, whose Amazon Web Services (AWS) is the largest cloud computing platform in the world – is a competitor for both Microsoft in the cloud computing and devices domain as well as for Flipkart. Both Google and Microsoft are wooing startups and enterprises as they play catch up to AWS.

With this three-day visit, Satya is expected to pitch the Azure platform to startups, the governments, and businesses alike in order to take on first-mover Amazon. With Flipkart in its kitty, Microsoft seems to have sent a strong signal that it is all set to play a key role in India’s digital transformation.