Update: We apologise to our readers for missing out on mentioning that Sandeep Aggarwal is an investor in Ideope Media Pvt. Ltd., the registered entity of Inc42 in his personal capacity. Also, to clarify all the facts/views mentioned in the story have been reproduced from Sandeep Aggarwal’s social media accounts and the official response sent to us by Sandeep’s PR team. None of Inc42′ investors have any influence on its editorial discretions or stories.

Your first founded company is mine and only mine, your second founded company is also mine, the kids we jointly gave birth to are also mine, and everything you ever created under the sun (which is most of the things in our hosuehold!!) are also mine. I own everything and you can just f%#$ off! I am the super woman, can make fool of pretty much anyone, and I own this world and no body else matter. Even when my boy friend threatened to kill you and I came to police station with him in his support for five hours, why are you still not understanding that there is nothing left between us. But anything to everything you created is mine. Please accept it, it is all mine. You do not even have right to breathe because you loved me unconditionally for 20 years and now pay the price.

Today, founder of a ‘unicorn’ startup, Sandeep, in back to back social media posts – accused his wife and co-founder of ShopClues, Radhika Aggarwal, of taking away his ‘voting rights’ from the company and also, for having an illicit love affair with the co-founder of the company.

He also accused her for intentionally and deliberately kicking out other founding team members from the company (ShopClues). Not only this, he also wrote that Radhika changed web history, tampered with Wikipedia and lied in the press that she founded ShopClues along with her “illicit affair partner” and Sandeep later joined the company.

According to our sources close to both Sandeep and Radhika, the two have not been on the best of terms for over two and a half years and they might have been headed towards a divorce pretty soon.

The problems between the two started when, Sandeep, a former equity research analyst for a San Francisco-based financial services firm, was arrested in July 2013 by FBI in San Jose. In 2009, he was working as an analyst in Collins Stewart and was covering both Microsoft and Yahoo for his research firm. He was receiving regular updates from his sources in Microsoft and passed on very specific information to Richard Lee, a portfolio manager at the hedge fund, SAC Capital, over a phone call, upon learning about the upcoming Microsoft – Yahoo deal.

Sandeep had later pleaded guilty over the same saying that he did this to improve his standing as an analyst and to increase revenue for his firm. “I know what I did was wrong and I’m very sorry for my conduct,” he said. He returned back to India a year later.

Post his return, according to him, things turned messy. As described by Sandeep in the following post. 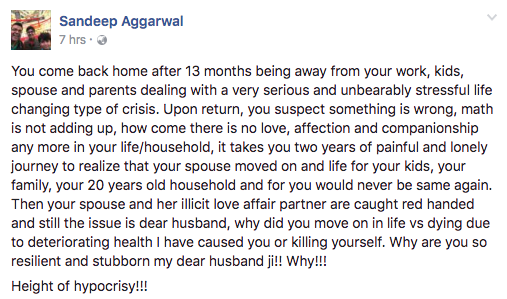 In a response to Inc42, Sandeep stated that he envisioned of ShopClues in October 2010 and built the entire platform of ShopClues on his own for nearly one year and finally, founded it officially in June 2011. He funded the company from his savings for the first 8-9 months before he raised $1.95 Mn as the first round of external capital for ShopClues from 15 of his friends “single-handedly”.

He then hired Radhika and Sanjay as employees in August 2011 as VP of Marketing and VP of Product (though Sanjay’ job was operations and Sandeep handled product end to end).

Sanjay was allowed to use his operations title followed by co-founder and Radhika, Mrinal Chatterjee and Devesh Rai were allowed to use Founder Team member as their designations by Sandeep.

When Sandeep was faced with the insider trading case, he nominated Sanjay Sethi as the new CEO to the board and Radhika to be a board member.

As per Sandeep, most investors were not impressed by Sanjay or Radhika; though they funded ShopClues because they find its unit economics and differentiation very impressive. In May 2014, Unilazer, led by Ronnie Screwvala, led the Series C in the company. Till date, Sandeep remains the largest individual shareholder of the company and majority holder of the company’s common shares.

He came back to India on 7th August 2014 and immediately realised that something was wrong in his relationship with Radhika, but he couldn’t figure out the why. He noticed that Radhika had stopped wearing her wedding ring, started using Ghai as her last name and would often interview with the press and media where she would tamper with the true history of ShopClues and minimise Sandeep’s contribution in creating ShopClues. Initially, Sandeep thought that Radhika and Sanjay are doing this to safeguard the company but then he realised that they were doing that to erase his legacy and true contribution for their own selfish gain.

In October 2016, Sandeep came to know that ShopClues changed Sandeep’s right to nominate a board member way back in April 2014 and he was kept in dark by the two. Sandeep assumed that Radhika sat on the board of ShopClues not as an officer of the company but as the nominee of Sandeep being the majority holder of the common shares of the company.

Once Sandeep came to know about the board seat fraud hatched by Sanjay and Radhika and perhaps other members of ShopClues board, he filled an Economic Offense Wing complaint with Gurgaon police.

He said that besides an adultery case, Economic offense and criminal defamation against Radhika and Sanjay, Sandeep is also battling for his kids in a custody case with Radhika.

In the following video, Sandeep talked about his story of founding ShopClues and Droom with Inc42 earlier this year.

Sandeep Aggarwal co-founded ShopClues in 2011 along with Radhika Aggarwal and Sanjay Sethi. The company joined the short list of Indian Unicorns last year when it raised $100 Mn from Tiger Global as Series E funding. While in exile, he planned on launching Droom. Things picked up for Droom after he returned to India. Droom raised its Series B round of funding in July 2016 led by BEENEXT, Digital Garage of Japan, LightBox Ventures, Beenos among others.

Earlier last year, MuSigma had also suffered similar issues, when Ambiga Dhiraj, replaced Dhiraj Rajaram as the CEO of MuSigma in February 2016. Little did the world know about the turmoil going on in their married life. At that time the reason that was cited was that Dhiraj was planning to relocate to the US, and hence the change in leadership. However, the couple got divorced later in May 2016. The reason is for the divorce remains unknown but there have been rumours of Dhiraj being involved in an alleged affair. We haven’t been able to confirm this rumour.

We have also reached out to Radhika Aggarwal and hadn’t received any response at the time of publishing the story.

What Does It Take For Digital Audio Platforms To Grow Their Ad Revenue?

Why Top Edtech Players Like Unacademy, BYJU’s Have Their Valuations Growing At B...

News Roundup: While UPI Continues To Grow, WhatsApp Pay Off To A Slow Start & Mo...

[The Outline By Inc42 Plus] Driving Into A Regulatory Abyss