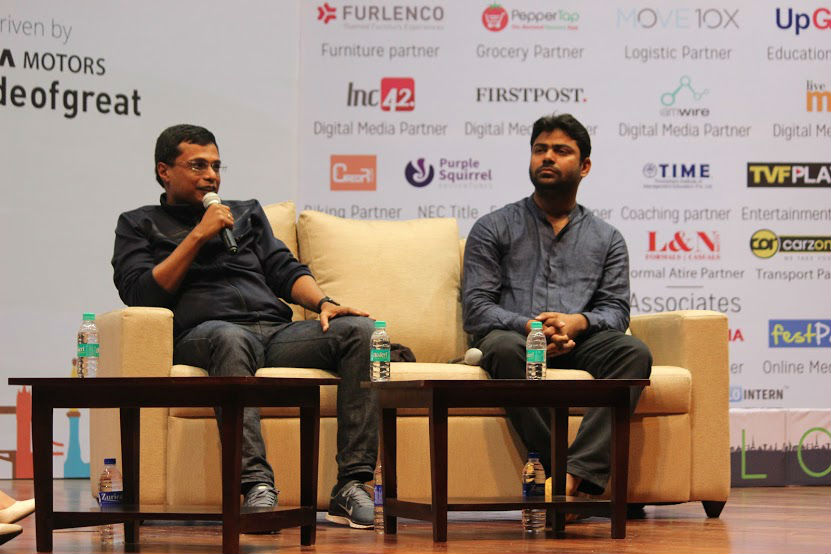 When the curtains lifted up for the much anticipated fireside chat between Sachin Bansal and Rahul Yadav at the IIT Bombay ESummit 2016, the crowd burst into cheers and applause for the two most talked-about boys of the Indian startup ecosystem. The duo reacted to the applause in their own different ways. Sachin, the seasoned entrepreneur, was a picture of repose, genuinely delighted by the enthusiasm. And Rahul Yadav, was his usual brash self, a picture of smugness. The contrast between the two – a seasoned player of the ecommerce space and the brash – was evident from that very moment.

So no wonder, when Bloomberg’s Abha Bakaya, started off the conversation with the firebrand duo, the difference in their responses and approaches became much more visible. While Sachin spoke out of a solid experience of seven  years of Flipkart’s journey of becoming one of the top five ecommerce companies, Rahul spoke from the limited, but prized experience, that came from founding and then, rather unfortunately, exiting one of the most spoken about startup Housing.com last year. Nevertheless, it seemed that somewhere Sachin’s sobriety and belief in Rahul’s next venture Intelligent Interfaces, had rubbed off on the once overtly brash ex-CEO of Housing.

When asked about what it is in the IITs that give birth to so many entrepreneurial journeys, Sachin was all full of reverence for his alma mater. He said, “IITs is a place where you learn a lot of humility. You learn that the world is a much bigger place; that’s the first thing that hit me when I joined. People are always pushing boundaries here. Everyone who goes into IITs enters after a lot of hard work and that helps in startup companies as well.”

Rahul meanwhile joked that, for him, IITs mean the best minds put in one place with really bad infrastructure in hostels. For him, IITs were reminiscent of small rooms, free movies on the internet, sports, lots of activities minus academics.

Challenges In Starting Up – From Then To Now

Speaking about the challenges in starting up seven years back and the changing scenario now, Sachin pointed out that some challenges still continue, such as the fact that it still takes 45 days to incorporate a company. He added, “We launched Flipkart in 10 weeks after quitting our jobs. It was practically impossible but we worked around it as we had my father’s company. But apart from the starting up challenge, the other side of ecosystem has changed fast.”

“Two years ago, when I visited this campus, the auditorium was not even half as full as today. And I am sure equal number of people are standing outside. Now good people from good colleges are seriously thinking about starting up. Similarly, the investor side has changed a lot. Back then, the number of investors willing to invest was small. Today, many entrepreneurs are getting investments from multiple investors. Even hiring was also a challenge then; which has now dramatically changed.”

The personal journey for Flipkart, from then to now, has been of constant change. Sachin added that on a daily basis, Flipkart is doing new things and has been constantly changing since the past seven years – staying true to the adage that change is the only constant.

However, what personally challenged Rahul in his Housing journey was the team’s inexperience in fields such as marketing and field sales. It is this inexperience which also led to the change in the thought process that IITians are invincible.

Said Rahul, “From day one, we assigned teams, in areas such as product engineering,  design and tech side. We could scale very easily as we all had an engineering background. However, in areas like marketing media, field sales, we had no experience. I didn’t hire admin, HR, finance guys earlier because I used to think they are useless. You just make the product and sell – that’s what I thought. But with time came the change in the thought process. As we grew to 1,500 people, we realised that these functions are equally important to build a good team.” The Growth vs Profitability Debate

On the debate whether a startup should prioritise growth or profitability, Sachin stated that it depended a lot on the space the concerned startup operates in. He said,

“If you are in a hyper growth market where there is a lot of headroom to grow, growth has to take priority. Even after eight years of working, ecommerce is still 1.5 % of total retail in India, so we still have a long way to go.”

He added that investors don’t just invest because one is growing very fast. “You have to show that you are a high-quality organisation that can attract great talent. That you can solve consumer problem, you are capital efficient even though in the short term you may be burning money. One change that has happened is, today investors are ready to come in early and stay for a very long time. I would say that if you are not in an exponential growth market, you should focus on profitability.”

Rahul agreed with Sachin on this, as for him too the growth vs profitability question depended on the business. He said, “In some cases, you have to crack the template and then scale. In case of Housing, we made the mistake of scaling to 10 cities and burning money. Rather we should have invested in the template.”

Speaking on the controversial topic of the power play between investor and founder and having been involved in one, in case of Housing, Rahul admitted that normally power dynamics was on the investor’s side. He stated unabashedly, “Investors are of two types-individual investors who put in their money and also act as advisors, and the funds. In case of Housing, we got much more support from individual investors. So I believe in taking limited cash from individuals and building the venture. VCs are also confused, and sometimes they get jittery. Hence I do not have much respect for fund managers.”

Not stopping there, he went on to say that in India most fund managers are not from tech background. And with the likes of Sachin entering the investing scene, things will change gradually.

Sachin, however, did not agree on this one. He said, “I think he probably got all the wrong guys! But I agree with him on this that if investors are not aligned with what you plan to do, you will have a hard time. You should be clear from the very start to both investors and shareholders. Yes, sometimes there are situations when you get into taking money from someone who doesn’t understand the venture and you are hoping they will get it. But I have seen those deals generally don’t work out.”

In order to tackle the power struggle between the two, which Rahul continued to assert was majorly skewed in favour of investors, Sachin stated that there were ways to get around the problem. One way was to give voting rights to founders as done by Alibaba and Flipkart itself. This policy stood in good stead for founders even if the younger league of founders were willing to dilute more stakes for the lure of big money.

He aptly stated that ultimately, the first primary interest is to take care of the business, than that of founders and investors, and then shareholders. Said Sachin,

“If business is not successful, it doesn’t matter how much share you own. Make sure you do the right thing at all times. It is important you should know why you are doing it-are you doing because you want to be in control and feel powerful or to make money? Or to create an impact? What is your primary angle on which you are optimising? That’s important for you to know.” 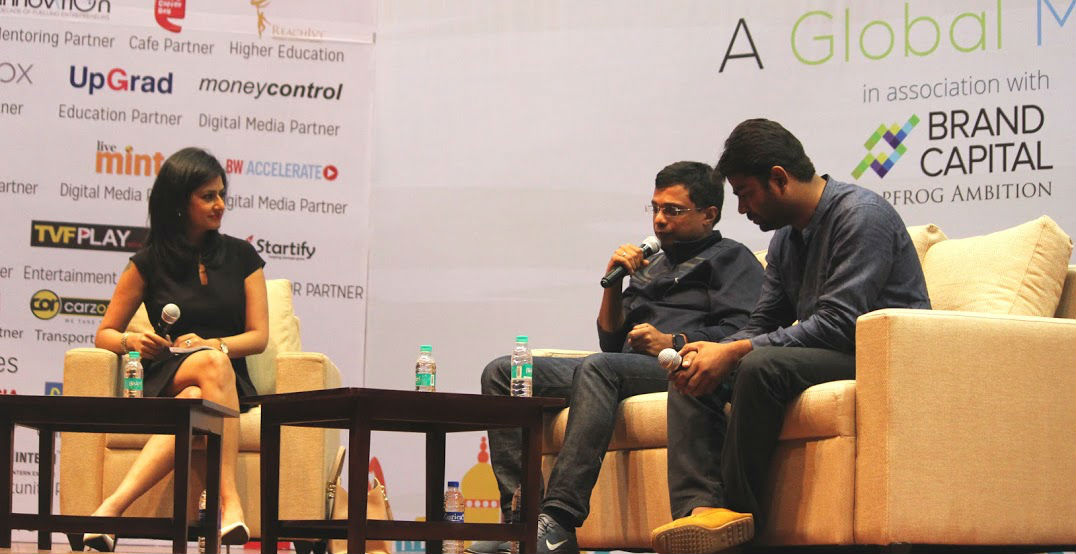 The Heat From The Competition And Critics

Speaking about the competition from global players, Sachin declared soundly that, “It motivates us. The worst thing to happen to any company is not have any competition. Then you don’t innovate and move forward. Before Amazon entered, we were growing 100% y-o-y. After they entered, we grew 200% y-o-y!”

And with increasing competition comes the need of standing out. On that, Sachin says that there are large problems to be solved. So, what he first looks at is whether the entrepreneur is going after larger issues to solve.  He says, “First thing I look at is if the entrepreneur is going after big problems; to the extent that it should almost be scary. Second thing I look at is if they have high quality of understanding of the space they are operating in. Actually, what I don’t look at is what they are really doing today. That doesn’t really matter. That will go through much transformation.”

Rahul candidly stated that he kept negativity at bay by blocking it out completely. “I don’t read articles about myself. The best approach is not to care about what is being said or written.”

Of Business Plans And Association

Sachin stated that he doesn’t look at business plans of entrepreneurs because he knows they will change in six months. He candidly admitted that he first got to know about Rahul’s new venture at one of Flipkart’s conferences, few months back. What excited him was the fact that it almost is an audacious project! He said, “The product picture is going after making organisations more productive. And it is a huge problem. There is a lot of loss in translation when ideas go to execution stage because of organisational inefficiencies. And at this moment, the least efficient organization in India is the government barring some pockets of excellence. So when I talked to Rahul, I realized that the problem is so big that it is almost scary. That excited me. “

Rahul admitted that he was never the one to make any plans. During his IIT days, he would drop courses which involved making plans and presentations! So naturally, when talking to CEOs to elicit support for his new venture, he conveniently dropped those from the list who asked for B-plans.

However, one thing that he has certainly planned to do is remove the inefficiencies from the system. He speaks determinedly,

“The decision to start Intelligent Interfaces came from the simple fact that I was looking to buy a sports car and realized that the roads were bad, infrastructure was bad, there were traffic jams and pollution. Fundamental things in this country are broken. That time I had the option to leave the country or stay. I decided to stay and fix it. Because there are certain inefficiencies which I want to remove. The government suffers from those. The potential they have is not channelized, as no talent is joining them. It is an interesting challenge. And I need a big problem to solve.”

This time again, Rahul’s restless mind has found an engaging problem to solve. And also, solid backing from some of the startup ecosystem’s stalwarts like Sachin himself. Who, as per Rahul, understands him better given his tech background. Both have started their journey from IITs, though Rahul never stayed back to complete it and dropped out in 4th year. He joked at the beginning of the session that he was supposed to collect his degree on this very stage but he didn’t. And had told these guys that one day they would call him back. They have and so has a bigger challenge. And he has risen up to it once again. All we can hope is that he has learnt his lesson well and learnt from the likes of Sachin. 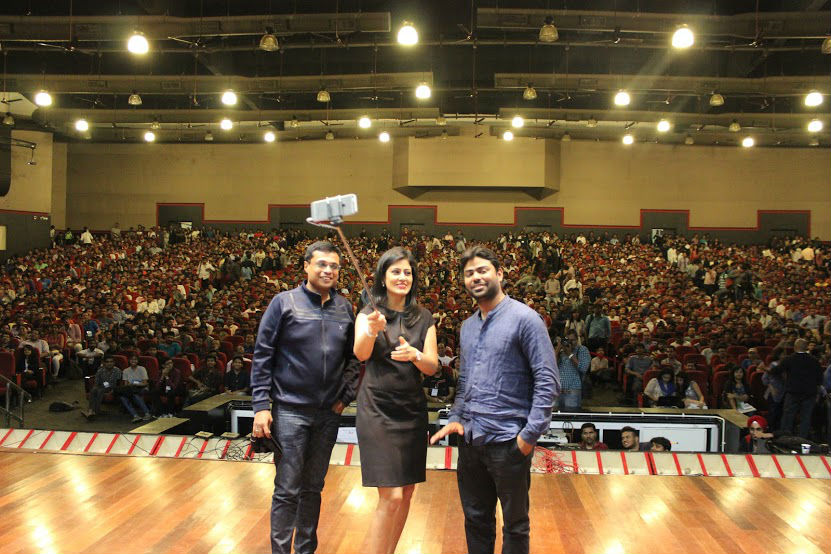