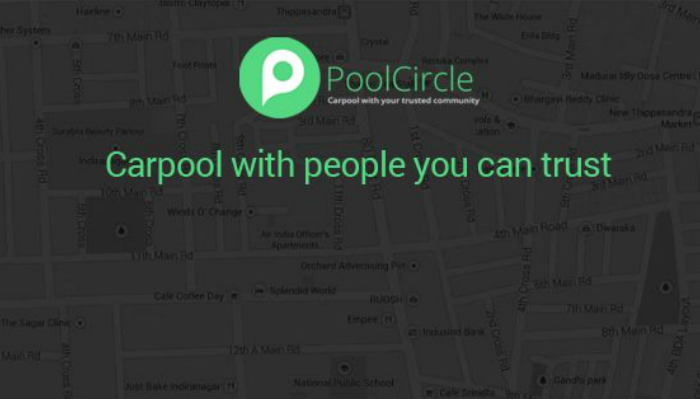 There are number of people who travel from one city to another on daily basis, be it for office purpose or any other. Traveling intercity is much more strenuous than travelling intra-city and comes with much more problems. It often happens that either the traveller is not able to get ticket confirmation for trains or travelling by own vehicle turns out to be too much costly. Keeping all these things in mind car-pooling service PoolCircle has recently come out with a new service called PoolCircle Intercity, where the travellers can choose to share rides with others while travelling from one city to another.

As per the analysis done by PoolCircle about the travel pattern between Chennai and Bangalore it found that 100,000 to 125,000 people commute between these 2 cities on a daily basis – across trains, buses, air, intercity taxis and private transport. With improving roads and reducing travel times, it is pretty much sure that the number of people willing to drive would drastically increase over time.

But using their own vehicle for travel turns out a bit costly, the 350 km between Chennai and Bangalore would run a fuel bill of about INR 2000/-, which when shared 4 way works to about INR 500/- per head. In comparison a A/C chair car ticket costs about INR 600/- plus cost of commuting to and from the station, totaling to about INR 900/- per head. There is a clear cost advantage for people who choose to travel by using the car pooling service. 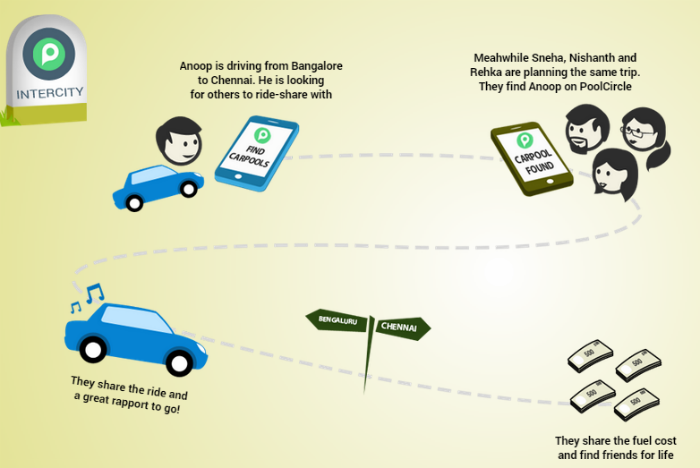 Currently, PoolCircle’s intercity service is available in three cities including Bangalore, Chennai, Mumbai and Delhi. It is launching PoolCircle InterCity for just 2 specific routes – Bangalore-Chennai and Mumbai-Pune. Other routes might emerge over time based on user demand, but these 2 routes are its clear initial targets.

“In a study that we did with about 520 people, Safety Concerns came up as the top reason for people’s reluctance to carpool. We felt that the InterCity commutes posed even more safety concerns than the regular Intra-City carpools. So, as part of the PoolCircle InterCity launch, we also put together a robust Trust Points based safety rating in place,” said Raghu Ramanujam, Founder & CEO, PoolCircle.

PoolCircle InterCity went live about a week back and while these are still very early days, it has already seen about 105 InterCity carpool searches, largely in the Chennai-Bangalore route. It also see interest in and around Hyderabad. ‘The daily user acquisition rate for PoolCircle has grown 300% since the launch of this service and we can extremely confident about this new offering,” added Raghu.

Poolcircle provides a strong community focus and allows users to choose which network of connections, or “Circles” they want to carpool with. Users can choose any combination of Office Colleagues, Facebook friends and LinkedIn Connections, in addition to offering Women Only carpools. All users are authenticated on the platform for both mobile number and email validation.

PoolCircle rewards users with additional Trust Points for signing up with their corporate email and social network accounts.

Users can also leave a user rating for other users, thereby building out a user driven safety and rating mechanism.

PoolCircle also allows the Car Owner the ability to set up a Expected Fuel Share that he or she expects to be paid by the Passenger for the carpool. This number is shown to the Passenger while setting up the carpool.

The startup also have a product level integration with Explara, the online event platform. This enables the event attendees to carpool to the event with other attendees and helps event organizers manage their attendee carparking better and reduce the carbon footprint of their event. By now it has enabled carpooling for 29 events, including NASSCOM and multiple startup events, on Explara.

At this point, PoolCircle is committed to building critical mass and remains a free service. It will soon take a commission on the fuel share that is exchanged between the car owner and the passenger. For example, PoolCircle will allow the Car owner to charge the Passenger a fuel share of, say, INR 4/- per km. So, if they share a 300 km ride share and the Passenger pays the Car Owner INR1200/-, PoolCircle will take a 10% commission on that cash transfer.

Initially launched on Android and iOS, PoolCircle is now available on web too.