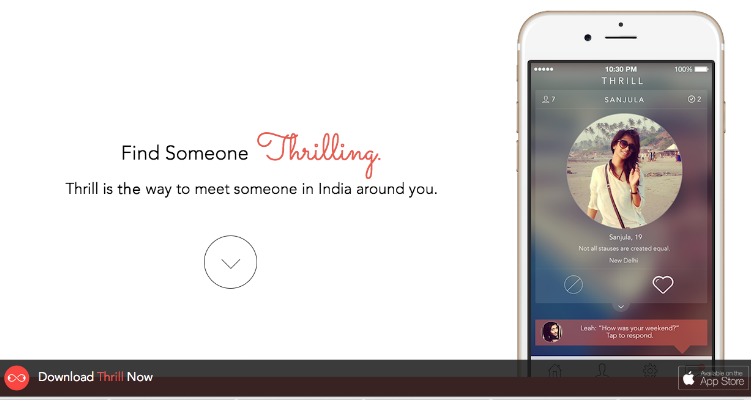 Mumbai-based People Group, which owns matrimonial website Shaadi.com, has bought about 25% stake in Delhi-based dating app maker Thrill in a cash and stock deal valued at close to about $1 Mn. As a part of deal Shaadi.com has merged its dating platform Fropper with the Thrill App. “We have combined our dating business Fropper with Thrill, making it the largest entity in the online dating space in India from users and revenue perspective,” said Anupam Mittal, founder and chief executive of People Group.

Founded by Josh Israel and Devin Serago in November 2012, ThrillApp had previously raised undisclosed amount in funding led by Samir Bangara, a former MD (digital) at The Walt Disney Company in India & currently CEO of Qyuki.com; and Rajesh Kamat, CA Media’s Indian operations head, along with a couple of unnamed Singapore-based investors in 2013.

Thrill, is focused on the Indian market, competes with dating apps Tinder among others. The app has number of interesting features such as, Men cannot automatically join the Thrill’s network, as they have to be voted in by Thrill’s community of women to join in. Thus the tagline – He applies. She decides.

ThrillApp is currently available on both Android and iOS. Thrill has over 1,00,000 downloads of its app in India, and with the merger with Fropper it will now get over six million members of Fropper.

Shaadi plans to reduce the product development life cycle for Thrill. “Core competencies required for success in both are similar. Being able to acquire customers at a reasonable cost, keeping them engaged and monetising them, are all things Shaadi has learned over the years,” said said Anupam Mittal.