Paytm, PayU India and Oxigen have got in-principle approvals for operating as Bharat Bill Payments Operating Unit, as announced by RBI. A total of 80 requests were received, out of which 62 were from non-banking entities. Till now, it has given approval to 33 applicants including aggregators like BillDesk and banks including SBI, ICICI, HDFC, Axis Bank, Kotak and others.

This will allow customers to pay all their bills anytime and anywhere under the Bharat Bill Payment System (BBPS), and the companies which have received licenses will provide platforms to offer these services.

As proposed, it is a step towards a cashless economy. It is also expected to make transactions easier, facilitate micro-payments and instantly recognise transactions. Operators can provide bill payment facilities through any of the channels under them.

For banks, this could be ATMs, branches, online or mobile apps, while non-banks will need to tie up with a bank for accounting purposes. Non-banks can also appoint agents with outlets such as kirana store which will display a BBPS logo.

In August 2015, Paytm was also given the in-principle payment bank licence. As said by Vijay Shekhar Sharma, founder of One97, “We’re planning to launch the payments unit by August-September, alongside our payments bank. The permits have come with some conditions laid down by the Reserve Bank of India that need to be fulfilled.”

Paytm has recently also appointed Ruchita Taneja Aggarwal as its lead of banking operations and Priya Karnik who will be working on products for Bank. Both Ruchita and Priya were previously associated with Citi in leadership roles; while Ruchita was Director – Treasury and Trade Solutions (TTS) and Singapore Head – Regional Product Sales, Priya’s last role with Citi was – Director – Treasury and Trade Solutions (TTS) – Regional Implementation.

With this license, PayU wants to strengthen its position in the utility bill payments segment and get one step closer to achieve its mission of “simplifying payments and financial ser–vices for everyone”. As per Sandeep Moonka , Director, Head – Banking Products, PayU India, their first objective is to get the full authorisation at the earliest.

“Once we commence work as Bharat Bill Payment Operating Unit (BBPOU), we will ensure that we provide the best in class experience to customers transacting through us and the larger benefits of BBPS platform in terms of having access to large number of billers,” he added.

The company was founded in 2011 by Nitin Gupta and Shailaz Nag and is based in Gurgaon. PayU India is backed by its parent Naspers Group. PayU India’s SMB business PayUmoney boasts of over 1,60,000 merchants. PayU India’s enterprise business PayUbiz is used by 80 out of the top 100 ecommerce websites of the country. Overall, PayU India has processed over 24,000 crores worth of GMV by the end of last financial year.

While Oxigen currently has a pan-India presence of 2 lakh retail outlets catering to the needs of 150 Mn customers.Founded in 2004 by Pramod Saxena, it has processed over 2 Bn transactions till date with a current transaction volume rate of 600 Mn transactions per annum.

“We are working to do a pilot with NPCI for demonstrating the BBPOU payment system. The target is to do it by mid of June,” said Pramod.

BBPS was launched by National Payments Corporation Of India (NPCI). It is an integrated bill payment system which will allow customers to pay utility bills like electricity, telephone, gas, DTH, school fees, etc. Also, there will be a system to register complaints regarding bill payments.

It will offer an interoperable and accessible bill payment service through a network of agents, while enabling multiple payment modes. It will even allows consumers to send and receive money through popular social channels like Facebook, Whatsapp, Twitter, SMS and email. 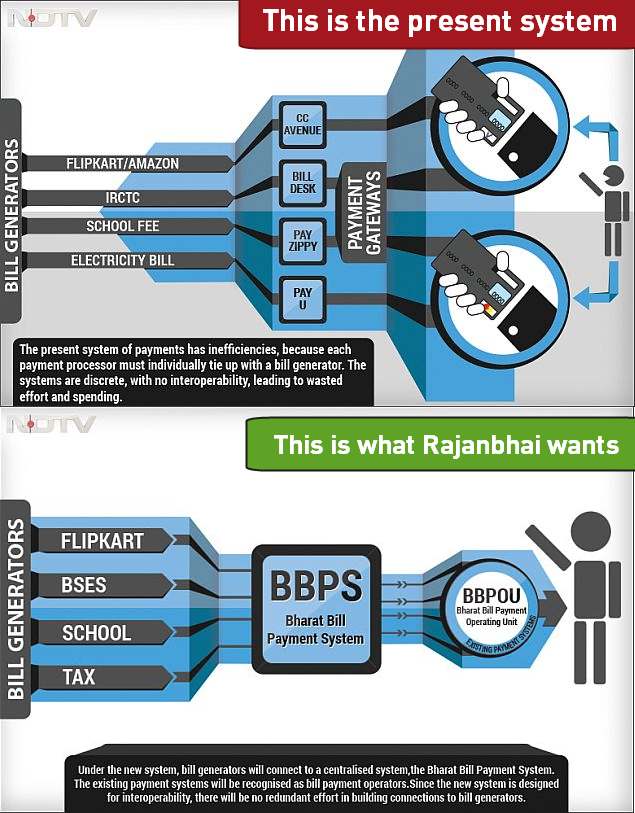 Companies with in-principle approvals would have to meet two conditions – including a certification from National Payment Corporation of India (NPCI) for adherence to BBPS standards and system readiness. A system audit would also have to be conducted to evaluate the hardware, software, critical applications and security.

As per RBI data, each year INR 6,223 Bn is generated across top 20 cities in India in bill payments. These are carried largely by cash or cheque, thereby adding an inefficient layer to transactions. With BBPS, RBI wants to move large chunk of this to online by creating a layer of interoperability between various bill payment platforms.

For example, digital wallet service like Oxigen, which allows consumers to fill digital wallet with cash at retail outlets, could be used to pay all their bills in cash, without Oxigen having to contact all the bill generators individually.

This will not only help in reducing fraudulent activities, but will also help RBI in keeping tab on all payments made in India, to fine tune their monetary policy and tax policies.

Some of the non-telecom PPIs that had applied for a licence but were not successful — these include MobiKwik Systems, Oxigen Services, and Itz Cash.

Earlier, RBI has also attempted to assign every citizen a unique 12-digit code as Aadhaar number.

As said by Sandeep Moonka, United Payments Interface (UPI) is a very promising solution from NPCI that leverages IMPS to enable faster P2P transactions. It promises to be an affordable transaction platform that could power low value transactions across the country, thereby pushing the economy closer to digital advantages.

“We would look at ways to engage with banks in expanding the adoption of UPI. We would play the role of a middleman between banks and merchants, directly or indirectly and add more merchants on to the platform,” he added.