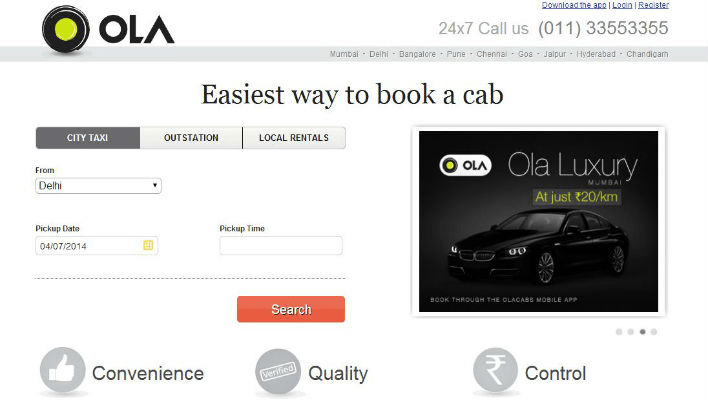 Bangalore based, taxi aggregator service, Olacabs has raised Rs.250 Cr in a new round of funding led by Steadview Capital and VC firm Sequoia Capital, with its existing investors Matrix Partner India and Tiger Global also participating in the round.

The startup has raised around $65 Mn in funding in three rounds of institutional funding. According to reports, with this new round of funding, now Olacabs is valued at about Rs.1000 Cr. Ola’s valuation has more than doubled since November 2013, when it had raised Rs.120 Cr in Series B funding led by Tiger Global and Matrix partners.

It will be using the money raised in this round for expanding in new cities, categories and to strengthen the cab aggregator’s driver ecosystem.

The need for quick and efficient point-to-point transport is very large in urban India. Ola is the leader in addressing this via technology, benefiting both consumers and drivers, said  Gautam Mago, principal, Sequoia Capital.

Founded in 2011 by IIT Bombay graduates Bhavish Aggarwal and Ankit Bhat, Ola currently has about 11,000 cabs across nine cities where it has services including Delhi-NCR, Bangalore, Chennai and Mumbai.

Earlier this year, Olacabs had launched its low-price offering i.e. OlaMini in Bangalore, which it plans to expand to other cities as well. Ola is growing 30% MoM with OlaMinis seeing the sharpest growth. OlaMini competes with UberX which has recently been introduced in the country by Uber.

A few other dealing in the same space includes TaxiForSure, Savaari, CarzOnRent’s EasyCabs, Meru Cabs and Uber. Olacabs currently is doing about 12k bookings a day which is almost half of what Meru does, making Meru number one in the country under this space. Let’s see how this round of funding will help Ola to gain more momentum for expansion.