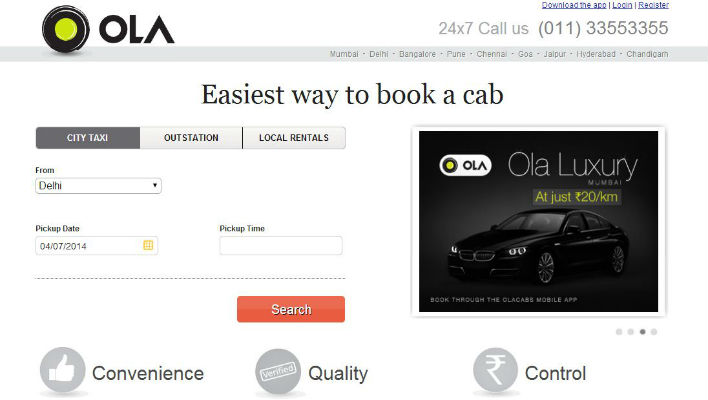 Taxi service aggregator Olacabs is close to raise a funding round of Rs 300 Cr from Hong Kong-based hedge fund Steadview Capital, says the latest reports. After this funding round, Olacabs is expected to be valued at over Rs 600 Cr.

According to people close to the development, existing investors Tiger Global Management Llc and Matrix Partners India are expected to participate in this round

Bangalore based company is expected to raise the amount of this round to be disbursed in tranches.

Founded in 2011 by IIT Bombay graduates Bhavish Aggarwal and Ankit Bhati, Olacabs has services in Delhi-NCR, Bangalore, Chennai and Mumbai, among other cities and has more than 10,000 cabs. In November 2013, it had raised Series B funding led by Tiger Global and Matrix partners.

Olacabs competes from TaxiForSure, Savaari, CarzOnRent’s EasyCabs, Meru Cabs and Uber which had launched its operation last year in the country and is even throwing a tough competition for Indian companies operating in the same space. Recently, Uber has also made its low-cost cab brand UberX available in three cities in the country.

Earlier this year, Olacabs has also launched its low-price offering i.e. OlaMini in Bangalore, which the company says charges same starting fare as of an auto rickshaws, OlaMini service is expected to roll out across the country by the year-end.

The market for online taxi or cab booking is heating up in the country, with number of startups operating in the space raising funding rounds. Earlier this year, TaxiForSure raised $10 Mn led by Bessemer Venture Partners and last year, Savaari raised funding Intel Capital.