Ola Electric claims to have crossed INR 1100 Cr in sales, possibly the highest sale (by value) of EV two-wheelers in the Indian market

Originally, the two-wheeler sale was intended to go live on September 8 but was postponed 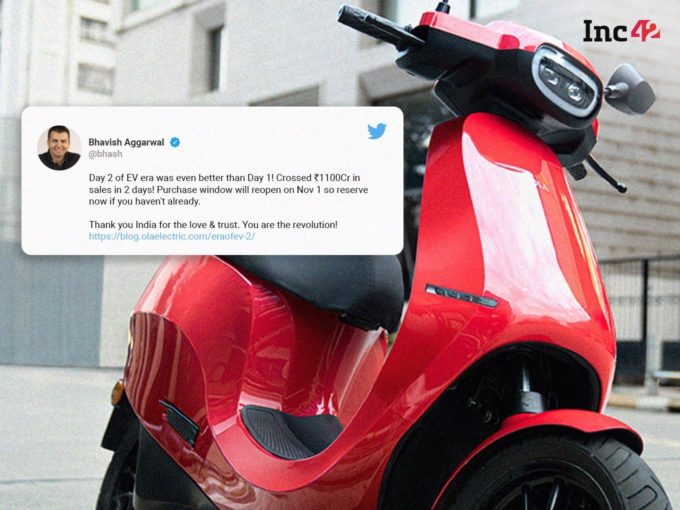 Ola Electric Scooters was in for a pleasant surprise when it registered a record sale worth INR 600 Cr on Day 1 of the launch of its e-scooters, Ola S1 and the S1 Pro. Now, the mobility startup has said it has clocked over INR 1100 Cr in combined sales for two days. Not just unprecedented, if the numbers are what the startup claims, it may be the highest sale in a day (by value) of EV two-wheelers in the Indian market.

Ola Founder Bhavish Aggarwal said in a blog post that while the purchase window is now closed, “our reservations remain open on olaelectric.com, and I want to let all of you know that we will be reopening the purchase window on November 1, 2021, just in time for Diwali”.

“In total, over two days, we have done over INR 1100 Cr in sales! This is unprecedented not just in the automotive industry, but it is one of the highest sales in a day (by value) for a single product in Indian e-commerce history! We truly are living in a digital India,” he claimed.

The company declined to comment on the number of two-wheelers sold in the last two days, but numbers suggest that Ola might have sold over 60K scooters until yesterday. Ola’s two-wheelers are among the highest-priced scooters in the Indian market. It launched the Ola S1 and S1 Pro at an ex-showroom price of INR 1 Lakh and INR 1.3 Lakh, respectively.

Ola’s two-wheeler sale was originally slated for September 8 at 6 PM, but due to consumer influx, its website crashed. Aggarwal took to Twitter to apologise, and claimed that the website was “just not up to the expectation of quality” and the team had many technical difficulties in making its website live for the purchase.

When the website restarted on September 15, the founder called the moment an “Era of EV” and confirmed that the startup had been receiving orders for 4 scooters per second at peak, and the deliveries would begin in October.

While, currently, EVs account for less than 1% of total vehicle sales, studies suggest that the market will be worth INR 475 Bn by 2025. In addition, two-wheelers will take up a major share — 62% — of the market, followed by three-wheelers at 35%.