On Wednesday, its shares had ended 1.43% higher after a volatile session

Its shares have declined nearly 11.5% in the past five trading days 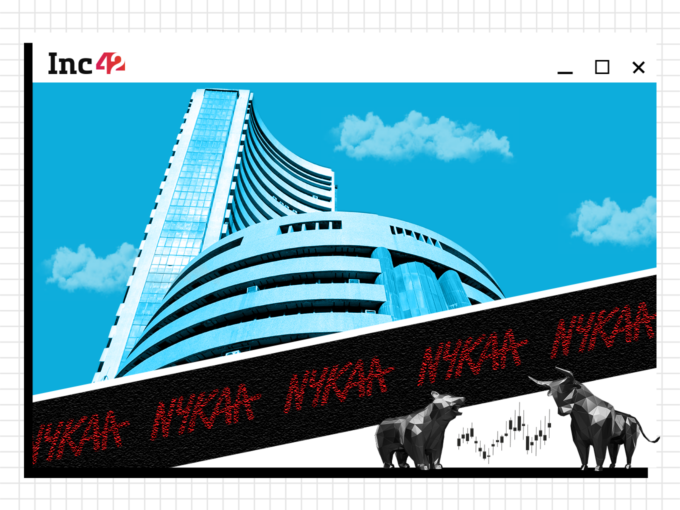 Analysts are of the view that INR 2,000 is a support level. Santosh Meena, head of research, Swastika Investmart said that the shares are expected to trade in the range of INR 2,000-INR 2,500 in the near term.

“The outlook is positive given that it is among the few profit making new age companies,” he said.

On Wednesday (December 8th, 2021), the 30 day lock-in period for the anchor investors ended leading to heavy volatility in the share prices. After a gap-down opening, and gliding through negative and positive territories throughout the session, shares of Nykaa on the BSE ended 1.43% higher at INR 2,183.30 per share.

The end of the lock-in period is generally expected to result in the decline of share prices as anchor investors tend to sell their shares to book profits.

He added that the intra-day low hit on the first day of trade after the lock-in period may act as a strong support for a further rally for quality stocks.

However, its share prices have been under pressure of late and have declined nearly 11.5% in the past five trading days.

Days after its stellar listing, Nykaa reported a 95.4% fall in its consolidated net profit for the July-September quarter.

The fall in profits came largely on the back of a 55.36% increase in its expenses to INR 889.09 Cr during Q2FY22, compared to the corresponding quarter of last fiscal. Its expenses stood at INR 572.26 Cr during the same quarter of 2020.

According to SEBI norms, an anchor investor, who is a qualified institutional buyer, cannot trade their shares till 30 days after the listing so that individual retail investors do not suffer.

“It is felt that a longer lock-in for Anchor Investors will provide more confidence to other investors. Therefore, there may be a need to review the period of lock-in for anchor investors,” SEBI said in a report on November 16.