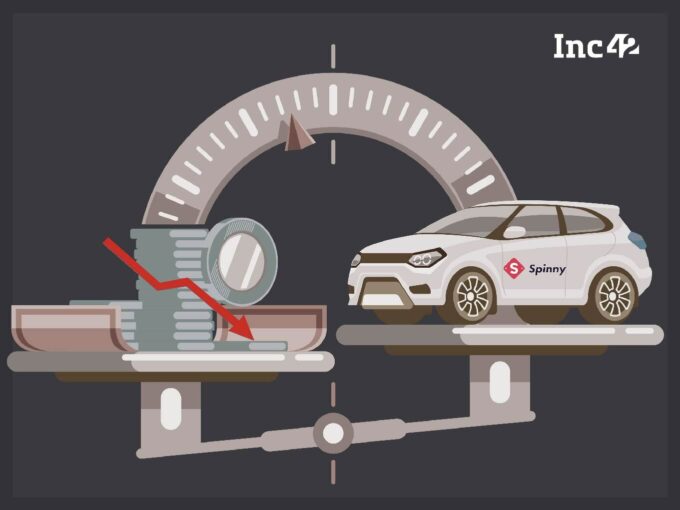 Gurugram-based used car marketplace startup Spinny, which entered the celebrated unicorn club last month, has posted a loss after tax worth INR 110 Cr in the financial year ending on March 31, 2021.

Spinny saw a 124% rise of revenue in FY21, showing a significant rise in its customer base. The startup posted a total income worth INR 39.7 Cr in FY21 in comparison to INR 17.7 Cr it clocked in FY20.

Founded in 2015 by Niraj Singh, Mohit Gupta and Ramanshu Mahaur, Spinny is a used car retailing platform. It operates across the entire value chain of pre-owned cars, embedding superior technology and processes to deliver a premium experience to customers.

The startup, at present, has over 15 car hubs that operate across eight cities such as – Delhi-NCR, Bengaluru, Mumbai, Pune, Hyderabad, Chennai, Kolkata, and Ahmedabad.

Spinny raised $283 Mn in its Series E round led by Abu Dhabi based – ADQ, US-based Tiger Global along with Avenir Group to enter the unicorn club. The funding helped the startup’s valuation soar to $1.8 Bn from $800 Mn.

In July last year, it raised $108 Mn in its Series D round led by Tiger Global.

Spinny competes against the likes of publicly listed CarTrade, along with IPO-bound Droom. Spinny also locks its horns with Cars24 which last month raised $400 Mn led by Alpha Wave at $3.3Bn valuation and is also mulling to go public in next 18-24 months.

CarDekho, another marketplace for used cars, is also gearing for a public listing as it has already bagged $250 Mn in its Pre-IPO round last year.

India’s used-car market is estimated to reach between $6.7 Mn to $7.2 Mn units per year by 2022, with the value of the segment pegged at INR 50,000 Cr, according to the outlook report by Mahindra First Choice Wheels Ltd.